Multiple Primary Malignant Tumors - A Clinical Analysis of 15,321 Patients with Malignancies at a Single Center in China

Background: Multiple primary malignant tumors (MPMTs) are defined as two or more histologically distinct malignancies in one individual, standard treatments for MPMTs are not well established, we aimed to clinical analyze the factors influence the treatment efficacy of MPMTs.

Conclusions: The early diagnosis of rare MPMTs should not be neglected in patients not only when treated for a primary malignancy but also during long-term follow-up. Effective treatment for MPMTs may yield promising curative effect and warrants further investigation.

Over the last three decades, the techniques for cancer diagnostics and treatments have greatly improved in China, which have markedly increased the survival of cancer patients [1,2]. On the other hand, the prolonged survival of cancer patients also led to an increase in the incidence of multiple primary malignant tumors (MPMTs). MPMTs are defined by the presence of two or more histologically distinct malignant tumors that are not due to recurrence, metastasis, or local spread in the same individual. MPMTs may be diagnosed synchronously (the second primary cancer is diagnosed within 6 months after the detection of the first primary cancer) or metachronously (the second primary cancer is diagnosed more than 6 months after the detection of the first primary cancer). MPMTs were first described by Billroth as early as 1889 and first published by Warren and Gate in 1932. Nowadays, The increase of MPMTs is becoming an important medical problem, and the incidence differs significantly between antemortem and postmortem studies [3,4].

Owing to variabilities of MPMTs in clinical characteristics and its low incidence, most clinicians are inexperienced at the diagnosis and treatment of this type of disease. For example, MPMTs are often misdiagnosed as recurrence or metastasis of the original malignancy, which may result in inappropriate treatments. This inevitably has adverse effects on the patient's prognosis. Moreover, standard treatments for MPMTs are not well established. Thus, we herein try to identify the factors influence the treatment efficacy and prognosis of MPMTs by analyze the clinical characteristics of the disease.

We reviewed the records of a retrospectively collected database of 167 patients with histopathological evidences of MPMTs admitted from March 2006 to June 2016 in Sir Run Run Shaw Hospital, College of Medicine, Zhejiang University, Hangzhou, China (supplementary table 1). The international diagnostic criteria of Warren and Gate's description was adopted [5]: Firstly, each tumor must be definitively malignant according to the histopathology; Secondly, the malignant tumors must be histologically different; Thirdly, metastasis must be excluded. Cases in which the MPMTs developed in the same organ or system were included in this study. For metachronous contralateral breast cancer, the inclusion criteria consisted of a time gap of 5 years and/or disparity in hormone receptor status without any metastatic site. Tumors defined in original medical records as either recurrent or metastatic were excluded. The tumor diagnosed firstly and associated with the cause of the patient's initial visit was defined as the first primary cancer (primary cancer), the second primary cancer (second cancer) was the one diagnosed secondly, and so forth. All of the primary tumors in MPMTs patients diagnosed within six months are classified as synchronous multiple primary malignant tumors (SMPMTs), and tumors diagnosed more than six months are deemed metachronous multiple primary malignant tumors (MMPMTs) [6].

The patients' follow-ups were carried out by telephone, electronic medical records, and letters. The overall survival (OS) was determined as the interval from diagnosis of MPMTs to the date of death for any cause or the last follow-up. All patients were followed until June 30, 2016, or death from any cause. Categorical variables are presented as the number of patients and percentages. A survival analysis was performed with SPSS version 22.0 (SPSS Inc., Chicago, IL, USA), and the Kaplan-Meier methodology was employed to analyze survival.

Age of the patients at the time of MPMTs diagnosis 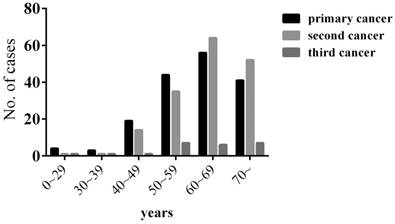 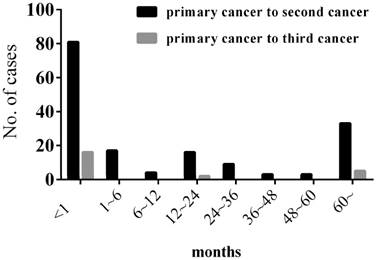 The invasion sites of MPMTs

*Others include endocrine tumor and nervous tumor.

The distribution pathological types of MPMTs

The AJCC 7th edition malignancies clinical stages were suitable for staging 92.81% (155/167) of patients with MPMTs. The most common stage of the primary, second and third cancer were II, I and I, respectively (Table 3).

The clinical stages of MPMTs

Site-wise distribution of MPMTs. *Others include endocrine tumor and nervous tumor. 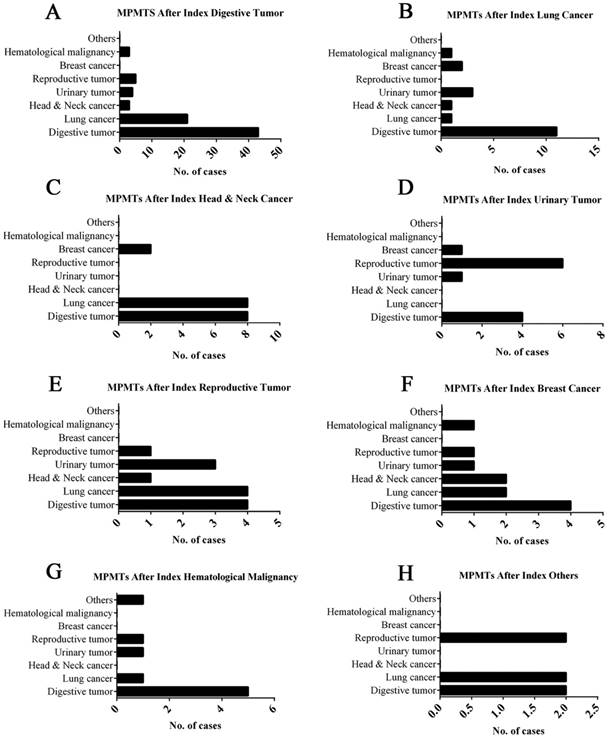 *Others include Chinese traditional medicine treatment and best supportive care.

The survival curves of 164 patients with MPMTs 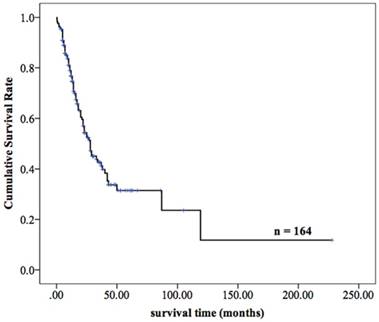 Given the rapid progress in anti-cancer therapies and the increasing aging population, diagnosis of MPMTs in the same patient is becoming more common than expected. Till now, the tumorigenetic mechanism of MPMTs remains elusive. Studies concerning this area are increasing. For instance, reportedly the concurrence of germline nonsense mutation in BRCA1-associated protein 1 (BAP1) predisposing factor and environmental exposure to asbestos and UV irradiation contributed to the high incidence of multiple cancers [9]. Partner and localizer of BRCA2 (PALB2) plays a critical role in homologous recombination repair (HRR) through its ability to recruit BRCA2 and RAD51 to DNA breaks. Structural variants deleting or duplicating multiple exons of PALB2 were reported to be association with breast and ovarian cancer [10]. Constitutional mutations of the TP53 are closely associated with Li-Fraumeni syndrome, an autosomal dominantly inherited prototypic cancer predisposition disease, characterized by a high frequency of soft tissue sarcomas, osteosarcomas, premenopausal breast cancer, brain tumors, adrenocortical carcinoma, leukemia, and other malignancies [11]. Additional mechanisms including aging [12], an unhealthy lifestyle [13,14], cancer treatments [15], or interactions between any of these factors [16] are also contributed to the development of MPMTs. It is worth noting that more than half of the patients ever received chemotherapy. As well known, the cumulative amount of cytotoxic drugs such as alkylating agent play an important role in the second tumor initiation. However, due to the numerous of tumor types and limited sample size in our study, the effect of chemotherapy on the initiation of the second tumor could not be evaluated exactly.

A literature review of 1,104,269 cancer patients concluded that the prevalence of MPMTs was between 0.73% and 11.7% [4]. In our study of 15,321 patients with malignant tumors, the prevalence of MPMTs was 1.09%, which is similar to the rate reported by Liu Z et al [17] in China but lower than those in Europe and the United States [18-20]. This difference may be due to the followings: most patients in our study were from Zhejiang province and all were Asian, whereas Western studies primarily examined Caucasians and Blacks. Moreover, compared with the Europeans and the Americans, the patients in our study are exposed to different environmental factors such as diet habits, industrialization degree, climate etc. Another important point here is the observation period in this study was approximately ten years, which may be insufficient to detect some secondary or other primary tumors. Comparatively, the Surveillance, Epidemiology, and End Results (SEER) Program analyzed data obtained from 1973-2003 in the United States [20]. Additionally, there are many factors that may also contributed to discrepancies in prevalence, such as differences in the registries and definition of multiple cancer sites [18], limited medical experience and technology, small and difficult to detect primary cancers at the time of presentation, and the incorrect classification of MPMTs as a recurrence or metastasis of the original carcinoma. Moreover, unlike the studies conducted in Western countries, almost all of patients included in our study refused postmortem analyses, which may also contribute to the observed differences.

SMPMTs were more common than MMPMTs in our study, which was inconsistent with other publications [17, 21, 22]. This discrepancy may be that our study mainly includes tumors from genitourinary system, lung, head & neck region and digestive system, in which SMPMTs were reported to be more frequent [21,23]. Such phenomenon may also be due to the characteristics of the study population, which primarily consisted of male, heavy smokers and alcoholics, as proposed by Aydiner A, et al [22]. Some patients who were diagnosed with cancer at our medical oncology center during long-term follow-up refused further diagnosis and treatment for additional primary lesions because of psychological distress, socioeconomic burden among other reasons. These may also contribute to the ratio of SMPMTs to MMPMTs.

The therapeutic principle for MPMTs depends on the stage of each tumor, the pathological type and the patients' physical condition. When MPMTs are pathologically confirmed, each tumor should be evaluated and staged as an independent tumor. If a new lesion was detected in a stage IV cancer patient, re-biopsy or multiple biopsy were recommended under the following situations: 1) The patient is in good physical condition with no contraindication for biopsy; 2) The elevation of tumor markers was not consistent with the expected tumor type, such as AFP elevation and new liver lesions were detected in lung cancer patient; 3) Imaging findings suggest lesions in rare metastatic sites. In addition, a baseline PET-CT may aid in the diagnosis of such multiple tumors and helps to devise a therapeutic plan in some cases [24, 25]. The economic capability and the willing of the patients also had an effect on the treatment plans as well as outcomes. For the intractable cases, Multi-Disciplinary Team (MDT) discussion is indispensable. In general, the tumor which is more detrimental to the patient's survival or quality of life should be treated with priority. If surgery is fit for MPMTs patient, resection should be a priority for both tumors and could be combined with chemoradiotherapy, endocrine therapy or other treatment methods when necessary [26]. It should be noted that preoperative risk assessment and postoperative monitoring are necessary, especially for patients with MPMTs who undergo vital organ resection. The treatment of MPMTs after surgery is usually according to the National Comprehensive Cancer Network (NCCN) guidelines of each tumor's pathological stage. When facing one chemotherapy regimen was not appropriate for treating all MPMTs, the efficient chemotherapy regimen to control the tumor of higher malignancy or later stage need to be considered on the priority list. In addition, a minority of our patients with MPMTs refused surgery, chemotherapy or radiotherapy owing to various reasons. Chinese traditional medicine and best supportive care were recommended under these circumstances.

This study, which represents our initial attempt to analyze the characteristics and prognosis of MPMTs, was subject to several limitations. Firstly, the size of the sample was restricted to part of Zhejiang province, which would introduce bias into this study. Secondly, our data were insufficient to allow us to precisely investigate the different system subtypes and other subgroups of the various MPMTs. Thirdly, genetic tests were not extensively utilized in the majority of our patients, and the etiology and pathogenesis of MPMTs were consequently not discussed in depth.

In conclusion, despite several limitations mentioned above, the results of our study are instructive. The early diagnosis of rare MPMTs should not be neglected in patients treated for a primary malignancy, and the diagnosis of subsequent tumors must be taken into consideration during long-term follow-ups. Most operable SMPMTs can be resected in a single stage with preoperative risk assessment and postoperative monitoring. Regular follow-up can detect most MMPMTs at an early stage. These MMPMTs can then be treated with appropriate interventions to achieve maximum therapeutic benefit. The relationship between multimodality treatments and the prognosis of the various MPMTs warrants further investigation, which will help develop good clinical treatment strategies for patients.