Background: Gastric cancer (GC) is one of the leading causes of lethal malignancies worldwide, especially in Eastern Asia. Clinical responses to antitumor therapies are often limited to a subset of patients.

Results: We found that sixteen mutated cancer genes were associated with widely used agent in chemotherapy of gastric cancer. Genes identified in these study are mainly involved in activation and inactivation of cancer chemotherapeutic agents, changes of apoptosis and proliferation, drug efflux, DNA damage repair, and the tumor microenvironment.

Discussion: A novel group of chemo-sensitivity related genes provided new therapeutic strategies to overcome the development and evolution of resistance to cancer chemotherapy.

Gastric carcinoma is one of the most common cancers and the second leading cause of cancer-related death in the world [1]. Despite a decline in morbidity and mortality, the burden remains high [2]. In gastric cancer patients, the treatment outcomes depend on the stage of the tumor at presentation and the condition of the patients. Surgical resection is the only possible curative treatment for gastric cancer. Moreover, more than two-thirds of patients have metastatic or surgically unresectable disease [3]. Therefore, Chemotherapy is used to relieve the symptoms of unresectable tumors and reduce the risk of recurrence and metastasis after surgery [4]. Although chemotherapy plays an important role in the treatment of recurrent and metastatic gastric cancer, multiple drug resistance (MDR) to chemotherapy is known as the major cause of treatment failure for gastric carcinomas [5]. Recently, numerous studies have reported the mechanisms of drug resistance in gastric carcinomas [6, 7]. However, the mechanisms of drug resistance in gastric cancer have not been fully elucidated.

To find mutations predicting chemotherapy benefit in gastric carcinomas, we performed ultra-deep targeted sequencing in a cohort with 72 patients (41 with a good response and 31 with a poor response). We sequenced 1,574 genes involved in tumor progression and development. The purpose of this study was twofold, firstly to find therapeutic response predictive biomarkers, secondly to identify new targets in gastric carcinomas treatment.

72 pairs of tumor and normal samples were collected from patients diagnosed with gastric carcinomas; all patients had received radical surgery (total or partial gastrectomy). After surgery, all patients were received chemotherapy (fluorouracil, platinum or paclitaxel). All patients were Chinese. The original clinical and survival data of patients were provided in Table 1. The ethical committee of Ren Ji Hospital, Shanghai Jiao Tong University School of Medicine approved the studies and all patients signed informed consent before recruitment to the study.

Tumor cell purity was assessed in hematoxylin and eosin (H&E) sections. At least 5 slices of 10 μm of thickness were cut from the paraffin block and tumor regions were scraped according to the assessment of tumor enriched area.

Detection of somatic mutations and indels

Mutect was used to detect somatic mutations, single-nucleotide variants (SNVs), small insertion and deletion (INDELs) [10]. To obtain a list of confident variants, we selected variants whose coverage was more than 20X. Vcf2maf was used to convert a vcf file into a maf file and annotate the somatic mutations [11].

Statistical analyses to test for correlation between mutations and clinicohistological variables such as age, sex and lymph node metastasis were performed using R/Bioconductor packages. We used the Fisher's exact test for difference between groups[13]. Using the clusterProfiler package, KEGG pathway enrichment analyses were performed with the significantly genes. The P value of 0.05 or less was considered statistically significant.

Seventy-two cases of gastric carcinomas patients (forty-one chemo-sensitive and thirty-one chemo-resistant) were analyzed (Table 1). In our cohort, the mean age was 61 years (range 33-80; SD 9.4), 57 patients were male (79%). With a median follow up of 14.5 months (SD 27.3), 34 patients had a dead status (47%). Based on response to chemotherapy drug, 41 of patients have good prognosis which overall survival beyond 36 months, other 31 patients have poor prognosis, which had been dead in 18 months.

In all of the 72 primary tumor samples an adequate library for sequencing was obtained. After read quality filtering, mapping, and alignment to the reference genome (hg19), the median sequencing depth was 277×. A total of 17993 genetic variations (median 207, range 14-959, SD 107.7) were identified in exonic (including nonsense, missense, nonstop, frame_shift_del, frame_shift_ins, in_frame_del and in_frame_ins) (Figure 1A). The predominant nucleotide changes were cytosine to thymine transitions, which is consistent with previous gastric carcinomas genomics data (Figure 1B). 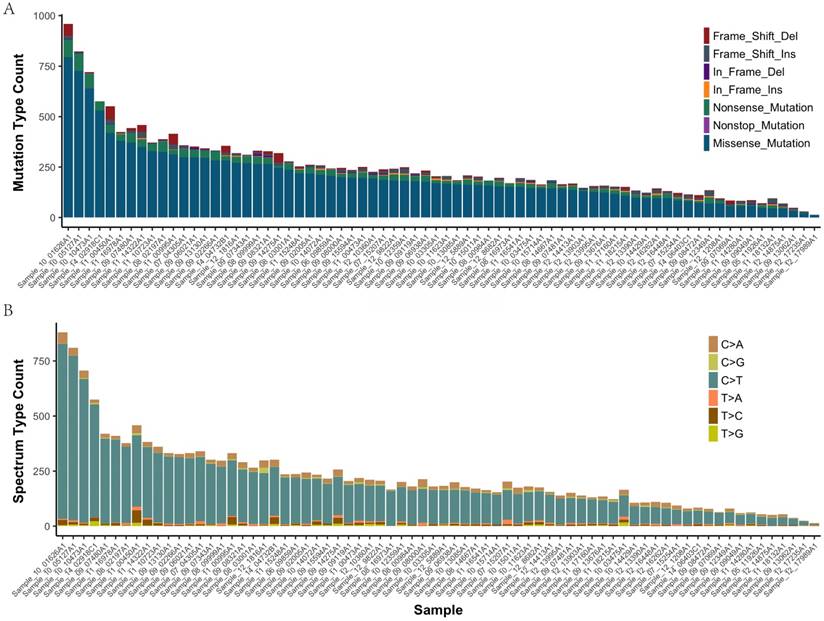 The mean number of mutations was 150, range 14-959, SD 107.7. These variants were distributed across 1495 different genes and were found in 72 samples (92% with at least two mutations). 4985 of the missense mutations identified are predicted to be possibly or probably damaging by Sift and Polyphen2, as these are more likely to play a causative role in tumorigenesis and represent therapeutic vulnerabilities. The number of damaging mutations considered to be chemo_sensitive samples was 71 (range 7-292), and 67 in chemo_resistant samples (range 6-233). The somatic mutation rates were similar for chemo-sensitive and chemo-resistant (average mutation rate of 243 versus 254 mutations per tumor, p = 0.79). Mutations in TTN, MUC16 and FSIP2 were the most frequently observed variants in this study (93%, 71%, and 69%, respectively). No significant difference between groups in Lauren type, vascular invasion and perineuronal invasion (Supplemental Figure 1).

The mutation burden and the Clonality do not correlate with chemotherapy

It has been reported that tumour mutational load or tumour mutational burden was associated with response to immunotherapy in multiple cancer types. To examine whether it also correlated with the chemotherapy in patients with GC, we investigated the number of missense mutations as tumor mutation burden in this tumor type. The number of missense mutations in these patients ranged from 13 to 794 (median value, 203). There were no significant differences between groups in chemotherapy (p = 0.34). We next investigated whether there was an association between clonality and chemotherapy. Clonality was positively correlated with tumor heterogeneity, as determined by MATH analysis. There had no significant statistical differences between groups in chemotherapy (p = 0.92). We next performed a survival analysis to evaluate the clinical relevance of clonality, and found no significant association between OS and mutation burden or clonality (Supplemental Figure 2). These results revealed that the number of missense mutations and clonality failed to correlate significantly with chemotherapy survival in GC.

Differences between chemo-resistant and chemo_sensitive

TP53 was the most predominantly mutated driver gene in gastric carcinomas, and there had no significant difference between the chemotherapy subgroups, with mutation rate was 27% vs. 35%. No statistically significant differences between the chemotherapy groups with the other commonly recurring genomic aberrations involve ARID1A, RHOA, RNF43, MUC6, KRAS, PTEN, CDH1, SMAD4, GLI3, ZIC4, ERBB2/3/4, NRG1, DCLK1, and PIK3CA (Supplemental Figure 3). However, cell adhesion gene CTNNA2 mutations were observed in 10 of 72 samples (9 in chemo_sensitive and 1 in chemp_resistant, p = 0.036) (Figure 2). CTNNA2 encoding catenin-a2 plays an important role in the regulation of B-catenin signaling. Six of the ten CTNNA2 single-nucleotide variants were probably damaging by Sift and Polyphen2 (R760H, T574K, T21M, A315V, R229C and S437C).

Oncoprint of mutations for the 31 significantly mutated genes in gastric cancer (GC) by deep sequencing.

Kaplan-Meier estimates of the overall survival of patients in each subgroup of gastric cancers based on significant genes (A-H). The wild-type cases (blue line) have better prognosis than mutated type cases (red line). 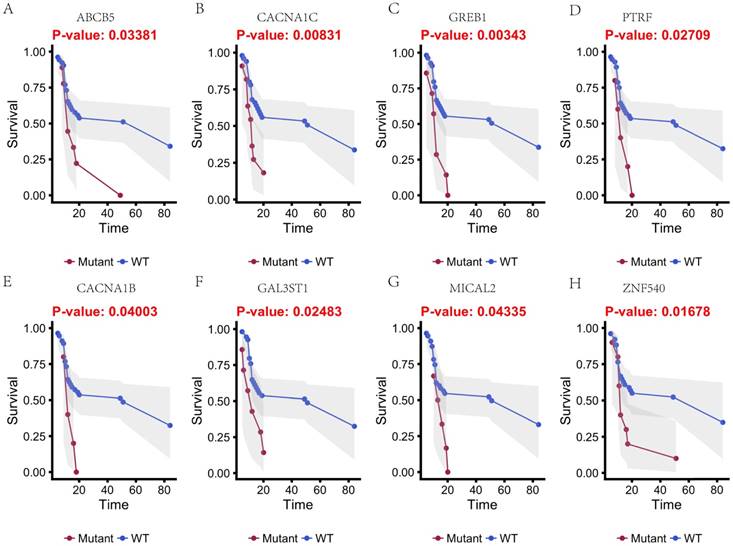 In this study, 31 genes had associated with chemotherapy. Then Univariate Kaplan-Meier analysis was used to assess associations between mutations in chemotherapy genes and overall survival from diagnosis. We found a significant association between OS and 16 genes (p < 0.05) (Figure 3 and Figure 4). This analysis revealed that the risk of death was significantly lower for patients with mutant type than for those with wild type, including ABCB5, CACNA1B, CACNA1C, GAL3ST1, GREB1, MICAL2, PTRF and ZNF540 (Figure 3). The other eight genes had high risk of death in mutant type than wild type, including BMPR2, CNTRL, DIDO1, KRIT1, MSH2, NKTR, PRKCB and TCHH (Figure 4).

Kaplan-Meier estimates of the overall survival of patients in each subgroup of gastric cancers based on significant genes (A-H). The mutated type cases (blue line) have better prognosis than wild-type cases (red line). 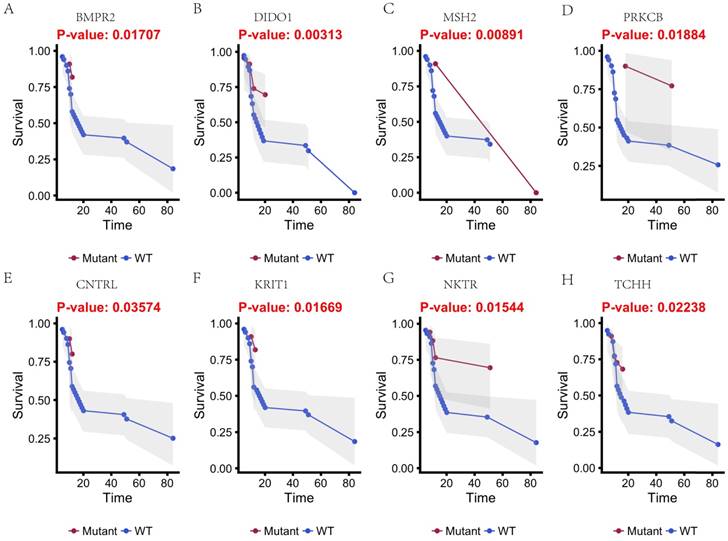 Chemotherapy resistances can be affected by a number of possible determinants such as activation and inactivation of chemotherapeutic drugs, changes of apoptosis and proliferation, drug efflux, DNA damage repair, and the tumor microenvironment. 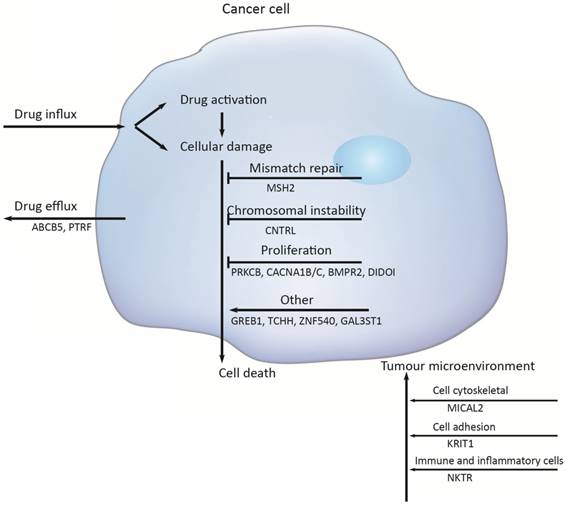 Firstly, activation and inactivation of cancer chemotherapeutic agents can play a major role in the development of resistance. One example of this is observed in the treatment of gastric cancer, capecitabine that is activated after phosphorylation that convert it to 5‑fluorouracil [15]. However, hypermethylation of the promoter of gene encoding thymidine phosphorylase is causing capecitabine resistance [16]. Secondly, the damaged DNA repair has also a clear role in anticancer drug resistance [17]. DNA mismatch repair (MMR) in the DNA damage response mediates the cytotoxicity of some DNAdamaging anticancer agents; for example, hypermethylation of MLH1 has been reported to cause resistance to cisplatin and carboplatin [18]; and the absence of MSH2 has been shown to increase resistance to thiopurines [19]. But in this study, the mutation of MSH2 was identified to increase sensitive to chemotherapy, with the mutation rate was 24%. Thirdly, Genomic instability that is called chromosomal instability (CIN) drives cancer development and increases chemotherapy resistance [20, 21]. The CIN gene (NEK2) mediated drug resistance was further demonstrated to be through AKT-mediated upregulation of ABC transporters [22]. Several studies have clearly implicated centrosome has a role in tumorigenesis and centrosome dysfunction can result in chromosome instability [23]. Centriolin is encoded by CNTRL gene and involves in maintaining centrosome structure and functions [24]. In our study, the higher mutation rates of gene CNTRL in chemo_sensitive subgroup ensure that they have a decreased risk of chromosomal instability in tumorigenesis.

Additionally, PRKCB, CACNA1A/B and BMP signaling pathway mainly function in regulating cell proliferation. The gene PRKCB may activate the MAPK pathway, regulating cell proliferation [25]. And a substantial alteration of Ca2+ could be responsible for cell proliferation and cell apoptosis through the cell cycle [26]. Bone morphogenetic protein (BMPs) is a large family of growth factors that belongs to tumor growth factor-β superfamily. They have crucial roles in regulating a wide range of developmental functions, such as pattern formation, differentiation, proliferation, migration and so on [27]. BMP protein binding to type 1 and 2 receptors (BMPR1 and BMPR2), activated BMP signaling, increased migration and invasion. In gastric cancer, bone morphogenetic protein-2 (BMP2) significantly inhibited cancer cell proliferation by suppressing the expression of β-catenin, c-Myc, and aurora kinases [28]. Death inducer-obliterator 1 (DIDOI) as a BMP-specific Smad-regulated target gene, promotes the attachment, migration, invasion and apoptosis resistance of melanoma cells [29]. In our study, there is a significant difference in the mutation rate of PRKCB, CACNA1A/B, BMPR2, and DIDOI in different groups.

The tumor microenvironment (TME) not only plays a vital role during cancer progression and metastasis but also has profound effects on therapeutic efficacy. In our study, mutation rates among genes related to cytoskeleton (MICAL2)[30], cell adhesion (KRIT1)[31, 32], were also significantly difference (MICAL2 p = 0.005, KRIT1 p = 0.018).

Several the ATP-binding cassette (ABC) transporter family of transmembrane proteins such as ABCB1 (MDR1, P-glycoprotein), ABCC1 (MRP1, multidrug resistance-associated protein 1) and ABCG2 (BCRP, Breast Cancer Resistance Protein), has been linked to mediate multidrug resistance of human cancer by promoting anticancer drug efflux [33, 34]. And ABCB5 (ATP-binding cassette member B5) was also as a clinically relevant multidrug resistance mediator in colorectal cancer [35], hepatocellular carcinoma [36] and human malignant melanoma [37]. In this study we observed that 23 % of the tumors had an ABCB5 mutation in chemoresistant subgroup and 5 % in chemosensitive subgroup, indicating that the mutation of ABCB5 plays an important role in drug resistant in gastric cancer. And PTRF knockdown also reduced multidrug resistance in cancer cells via the fortification of lipid rafts [38]. In this study, the mutant PTRF increased the drug resistance in gastric cancer.

Two important conclusions can be inferred from these data. First, genes including TP53, CTNNB1, ARID1A, CDH1, PTEN, KRAS and so on, which were as drivers of gastric carcinogenesis, play an important role in tumor development and progression. However most of these genetic variants do not influence the drug responses. Second, drug resistance to chemotherapy in gastric carcinomas is a complex and integrated activation and inactivation, changes of apoptosis and proliferation, drug efflux, DNA damage repair, and the tumor microenvironment. To discover and prioritize recurrent mutations associated with response to chemotherapy agents, larger sample series are urgently needed.