Methods and materials: We analysed the relationship between MMR status (obtained by histochemical analysis), neutrophil and lymphocyte counts, NLR, and CRP level. The impact of systemic inflammatory factors on survival was also evaluated in dMMR and pMMR CRC patients.

Results: A total of 1353 male and 892 female patients were eligible for analysis, of which, 253 patients (11.3%) were found to have dMMR status. Patients with dMMR status presented with increased neutrophil counts, and higher NLR and CRP levels in early stage CRC. In stage IV CRC patients, no correlation between MMR status and systemic inflammatory factors was found. Lymphocyte counts did not correlate with MMR status. High NLR was a prognostic factor for poor survival in pMMR CRC. However, NLR was not a prognostic factor in dMMR CRC.

Conclusions: Our results suggest that dMMR CRC correlates with higher neutrophil count, NLR and CRP levels only in non-metastatic patients, and NLR has prognostic value only in pMMR CRC.

Recent studies have highlighted the role of mismatch repair (MMR) status as a prognostic factor for survival and a predictor for PD-1 blockade in metastatic colorectal cancer (CRC) [1-3]. Tumours with MMR-deficiency (dMMR) are known to display several differentiating characteristics, such as mucinous features, and presence of high levels of tumour-infiltrating lymphocytes [4-7]. Indeed, several studies have reported differences in immune microenvironment and genetic characteristics between dMMR and MMR-proficient (pMMR) tumours [8, 9]. For example, Llosa et al. report increased mutational burden as well as T-helper cell 1 (Th1) and cytotoxic T-lymphocyte (CTL) infiltration in dMMR tumours [9].

Apart from local immune response, there is growing consensus that systemic inflammatory factors also promote cancer growth and metastasis [10-15]. For example, increases in both neutrophils and C-reactive protein (CRP) were associated with shorter survival in metastatic colorectal cancer (mCRC patients) [10, 16]. Although there is an accepted link between MMR status and local inflammatory factors, it is unclear whether MMR status is associated with systemic inflammatory response, since conflicting evidence exists in literature. While Pine et al found no association between MMR status and neutrophil lymphocyte ratio, Park and group reported that both neutrophil counts and CRP levels were higher in dMMR patients [12, 17]. The inconsistency in results might be caused by small sample size and heterogeneity in tumour stages of the patients.

In light of these aspects, we conducted a study aimed at overcoming the abovementioned limitations and set out to investigate the relationship between MMR status and systemic inflammatory factors in CRC patients. In addition, we also conducted subgroup analysis based on tumour stage.

We selected patients who met the following inclusion criteria: 1) diagnosis of colorectal cancer at the Sun Yat-sen University Cancer Center between 2009 and 2014; 2) availability of pre-treatment routine blood test records; and 3) availability of follow-up information; 4) underwent resection, including both curative and palliative intent. The exclusion criteria included presence of infection, haematological disease, hyperpyrexia, intestinal perforation, or intestinal obstruction at initial diagnosis. Patients with emergency resection or managed non-operatively were excluded. Informed consent was obtained from all patients. This study was approved by the ethical committee of Sun Yat-sen University cancer center.

Neutrophil and lymphocyte counts were part of routine blood test parameters. The routine blood tests were conducted by SysmexXE-​5000™ Automated Hematology System (Shanghai, China)​​​​​, while CRP quantitation was performed using a Hitachi Automatic Analyzer 7600-020 (Tokyo, Japan). A Roche Elecsys 2010 Chemistry Analyzer (Basel, Switzerland) was utilised for the electrochemiluminescent measurement of carcinoembryonic antigen (CEA) levels. A ratio of the neutrophil counts to the lymphocyte counts, defined as the neutrophil to lymphocyte ratio (NLR) was calculated, and the samples were categorized into two groups based on a NLR ratio of >3 and that of ≤3.

The slides were obtained from the archives of the Department of Pathology, Cancer Center, Sun Yat-Sen University, Guaangzhou, China. The tumour cases were histologically re-confirmed and we selected the most representative block for immunohistochemistry (IHC). IHC for the four most commonly assessed mismatch repair proteins(MutL homolog 1 [MLH1], postmeiotic segregation increased, Saccharomycescerevisiae 2 [PMS2],MutS homolog 2 [MSH2], and MutS homolog 6 [MSH6])was performed using the Envision two-step procedure, as per manufacturer's instructions (Dako, Glostrup, Denmark). The tumour tissue sections were dried overnight at 37˚C, dewaxed in xylene, rehydrated by passing through graded alcohol, and immersed in 3% hydrogen peroxide for 20 min to block endogenous peroxidase activities. The tissue sections were then pre-treated with antigen retrieval buffer (EDTA buffer, pH 8.0, at 100°C, 2 min in a pressure cooker), and incubated with 10% normal goat serum at room temperature for 10 min to block nonspecific signals. Subsequently, the slides were incubated overnight at 4˚C using the following primary antibodies: anti-MLH1, anti-PMS2, anti-MSH2, and anti-MSH6 (1:50; Beijing Zhong Shan-Golden Bridge Biological Technology, Beijing, China). After rinsing five times with 0.01 mol/L phosphate-buffered saline (PBS; pH = 7.4) for 10 min, the sections were incubated with a secondary antibody (Envision; Dako, Glostrup, Denmark) for 1 hour at 25˚C, washed again in PBS, and stained with DAB (3,3-diaminobenzidine) substrate. Finally, the sections were counterstained with Mayer's haematoxylin, dehydrated, and mounted. The negative control samples were treated with PBS instead of the primary antibody. Non-neoplastic colonic mucosa, stromal cells, infiltrating lymphocytes, or the centres of lymphoid follicles were used as internal positive controls. Known MMR deficient colorectal carcinomas served as external negative controls. Two experienced pathologists blinded to patient clinical profile evaluated the staining results independently. Positive protein expression was defined as nuclear staining within tumour cells, while negative protein expression was defined as complete absence of nuclear staining with concurrent positive signal from internal positive control staining. Tumours with loss of MLH1, PMS2, MSH2, or MSH6 protein, as visualized by light microscopy, were classified as MLH1, PMS2, MSH2, or MSH6 negative, respectively. If internal non-neoplastic tissues showed invalid negative staining, the IHC procedure was repeated. When the opinions of the two pathologists were different, agreement was reached by consensus.

The tumour microenvironment was evaluated by histopathological analysis of haematoxylin and eosin (HE) stained tissue sections by two pathologists who were blinded to the clinical data. In case of differences of opinion, agreement was reached by consensus. We evaluated all the HE sections for each patient. In general, the inflammatory responses in different sections of a tumour were similar. If there were differences between sections, the most representative and invasive part of the primary tumour was chosen in order to avoid bias. Tumour microenvironment parameters were assessed as previously reported [17-19]. We studied the stromal percentage, (SP, defined as the stromal-carcinoma ratio as visible in the tumour section), neutrophil and lymphocyte infiltration (both in central region and invasive margin), and Crohn's-like inflammatory reaction. Briefly, SP 70% implies a stromal percentage of 70%; SP was classified as SP-low (<50%) and SP-high (≥50%). We used a four-degree scale to assess the infiltration of neutrophils and lymphocytes. A score of 0 indicated an absence of reaction, 1 weak, 2 moderate, and 3 severe increase of each cell type. Absent and weak (0-1) were combined as low grade, while moderate to severe increase (2-3) were high grade. Crohn's-like reaction was defined as transmural lymphoid reaction, often involving the lymphoid follicle-like structures. It was scored as 0 (absent) and 1(existent).

All statistical analyses were performed using the Statistical Package for the Social Sciences (SPSS) software, version 22. Frequency distribution analysis and descriptive statistics were used to compare patient characteristics. Survival curves were plotted using the Kaplan-Meier method, and the differences were compared using the loge-rank test. Multivariate analysis using a Cox proportional hazards model was used to test independent significance by backward elimination of insignificant explanatory variables. A P value ≤ 0.05 was considered to be significant.

* Chi-square test was used to compare patient characteristics, and a P value ≤ 0.05 was considered to be significant.

* Chi-square test was used to compare patient characteristics, and a P value ≤ 0.05 was considered to be significant.

☆ 16 patients were with missing CRP values.

The distributions of neutrophil counts (A, B and C), lymphocyte counts (D, E and F) and CRP levels (G, H and I) between dMMR and pMMR CRC patients, as grouped by tumour stage. 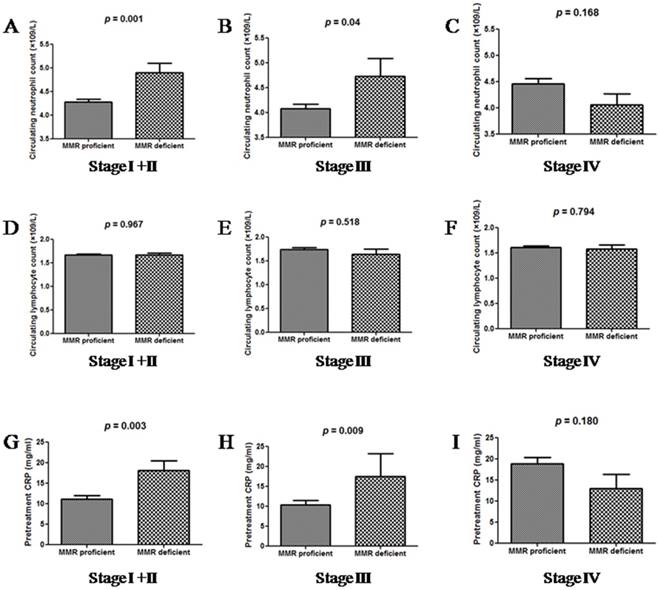 The distributions of neutrophil counts, lymphocyte counts and CRP in dMMR (A, B and C) and pMMR (D, E and F) CRC patients as grouped by stage. 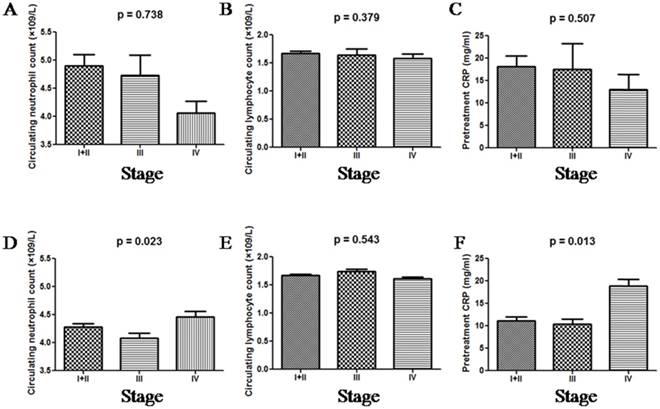 Diabetes mellitus and hypertension are commonly found in colon cancer patients, and they influence the levels of CRP or neutrophil counts. We performed sub-group analysis in 1784 patients without hypertension and 2048 non-diabetic patients. The distribution of NLR and CRP levels between dMMR and pMMR patients was similar (data not shown).

We also analysed the effect of MMR status on the relationship between local inflammatory infiltrates in the primary tumour, and systemic inflammation. In dMMR patients, CRP levels correlated only with lymphocyte infiltration, within the tumour microenvironment parameter panel, while no correlation was observed between NLR and local tumour microenvironment parameters (Supplementary table 3). In pMMR patients, increased serum CRP levels were predictive of higher density of neutrophils infiltration, lower lymphocyte infiltration, and a higher chance of Crohn's-like reaction. A NLR>3 was predictive of higher neutrophil infiltration in the central region (Supplementary table 4).

In this study, we sought to establish the relationship between MMR status, local tissue inflammatory microenvironment, and systemic inflammation, and the overall effect of these factors on patient survival parameters. Our results indicate that systemic inflammatory factors, including NLR and CRP, are associated with MMR status. Higher neutrophil counts and CRP levels were observed in dMMR CRC, than in pMMR CRC, though this was only in non-metastatic CRC. Both NLR and CRP were comparable between dMMR and pMMR CRC when metastases were found. In pMMR CRC patients, NLR and CRP had significant prognostic value. These results suggest that systemic inflammatory factors are affected by MMR status and tumour stage (related to distant metastasis).

Disease-free survival of early stage CRC patients with dMMR (A and C) and pMMR (B and D) status, as grouped by NLR. 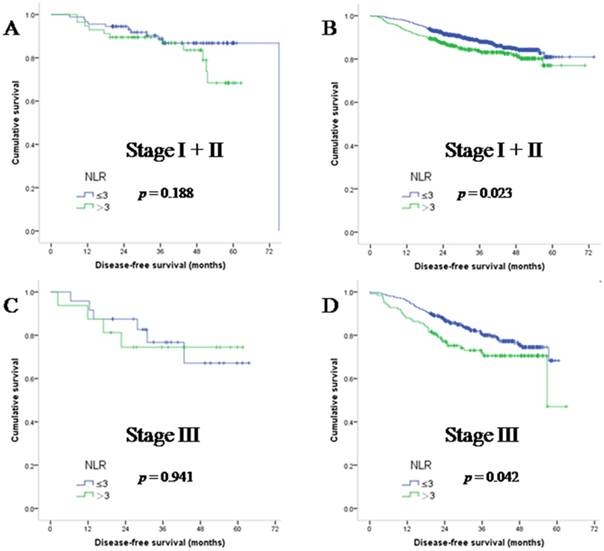 Overall survival of stage IV CRC patients with dMMR (A) and pMMR (B) status, as grouped by NLR.

The results of our study are in line with those obtained by Park and group (16), while they are inconsistent with those published by Pine and group, who report a lack of correlation between NLR and MMR status [12]. There might be several reasons underlying this discordance. The study published by Pine and group involved a small sample size, with 55 dMMR and 286 pMMR CRC patients. In addition, there was heterogeneity in the patient population, with reference to tumour stage. A heterogeneous patient population was analysed as a single group, which probably affected statistical significance parameters. Our results show that metastatic status of the CRC significantly influences the association between NLR and dMMR. This may help reconcile the discordance between results published by Park et al and Pine et al. We also found that NLR and CRP had prognostic value in pMMR CRC patients, in accordance with literature. However, neither NLR nor CRP was a predictive factor in dMMR CRC patients, suggesting that MMR status impacts the prognostic value of NLR and CRP.

The main limitation of this study is that it is a retrospective study from a single hospital. In addition, we did not analyse microsatellite instability status of patients. Another limitation is that since most study participants were diagnosed in recent years, OS of all patients could not be assessed.

In summary, this study suggests that patients with dMMR status may be associated with higher neutrophil counts and CRP levels in early stage CRC, and that NLR has prognostic value only in pMMR CRC. Further studies are needed to validate our results.

This work was supported by grants from the Natural Science Foundation of Guangdong, China (2015A030313010), Science and Technology Program of Guangzhou, China (1563000305) and National Natural Science Foundation of China (81272641 and 81572409). We would like to thank Editage (www.editage.cn) for English language editing. The data in the study were deposited in the Research Data Deposit system of Sun Yat-sen University Cancer [RDDA2018000761].