Covalent CDK7 inhibitor THZ1 is a newly discovered anti-tumor drug.THZ1 affects the function of transcription factor TFIIH by inhibiting CDK7, which in turn affects RNA polymerase II, and ultimately affects transcription initiation. Study found that THZ1 could inhibit proliferation and promote apoptosis of several tumor cell lines. However, there is no report of the potential side effect of THZ1 in normal tissues. In the course of cancer, the muscle consumption of cachexia needs to be supplemented by the differentiation of muscle cells. However, the effect of THZ1 on myogenic differentiation remains unclear. Our study in this article found that THZ1 could both inhibit the differentiation of C2C12 cells and mouse primary myoblasts, also repressing the expression of differentiation-related transcription factors and muscle structural proteins, such as and myogenin, myh3 and MCK. Moreover, THZ1 could inhibit C2C12 cell proliferation and migration, increase its oxidative stress and promote its apoptosis. Our data indicates that THZ1 inhibits myogenic differentiation, suggesting that therapies based on THZ1 might have potential side effects on muscle functions.

Cachexia is a major complication of patients with various malignancies, and muscle depletion is critical to causing and exacerbating cachexia. Muscle consumption is the result of decreased synthesis and increased breakdown of muscle proteins, and nutrients supplementary could not improve this state of consumption [1, 2]. However, skeletal myogenesis is a complicated physiological process orchestrated by intracellular interactions and extracellular factors [3]. Satelliate cells lying beneath the basic lamina of muscle specifically express pax7, announcing its potential of myogenesis [4]. Pax7 then activates the expression of Myf5 and later MyoD, determining the cell as myogenic precusors in vivo and primary myoblasts in vitro [5-7]. After that, myoblasts and precusors who express myogenin and myosin heavy chain differentiate into myocytes [5]. Mononucleate myocytes fuse with each other, forming the multinucleate myotube, who has a contractile function [8].

Some transcription factors participate in this procedure, mainly myogenic regulatory actors (MRFs) and myocyte enhancer factors (MEFs) [9]. MRFs, including Myf5, MyoD, myogenin and MRF4, all belong to basic helix-loop-helix (bHLH) transcription family and targets E-box on DNA with its conserved sequence [10, 11]. Myf5 and MyoD express in proliferating period and gain their transient peak shortly after differentiation induction. When differentiation activity initiates, myogenin expression arises, which is modulated by MyoD [5].After several days of differentiation, myosin heavy chain expresses as a marker of muscle fibre [12].It's worth mentioning that expression of Myh and Mylpf is partly regulated by MyoD and myogenin. Finally, Myh and Mylpf act as heavy chain and light chain of fast skeletal muscle [4].Mef2 proteins, in which Mef2c is muscle-restricted, coordinate with MRFs in the binding of E-box [13]. Recently, more and more small-molecule compounds and medicines, even clinical drugs have been proved to be effective to influence myogenic differentiation, such as curcumin, ranolazine, dexamethasone, who provide new entry point towards the treatment of myopathies [3, 14, 15].

THZ1 is a covalent inhibitor of cyclin-dependent kinase 7 (CDK7) [16].CDK7 has two roles, one is a part of transcriptional factor TFIIH, another is a member of CDK Activating Kinase (CAK) [17]. Correspondingly, CDK7 impacts on transcriptional initiation through phosphorylating serine-5 (S5) on the CTD of RNA Pol II as well as affecting cell cycle via activating other cyclin-dependent kinases such as CDK1 and CDK2 [18, 19]. Resent researches put particular emphasis on the function of transcriptional inhibition of THZ1. Interestingly, THZ1 globally inhibits transcription but specifically inactivates CDK7 by covalently and irreversibly binding to a crsteine residue outside the CDK7 canonical kinase domain [20]. In the past few years, the anti-tumor role of THZ1 has gained more and more attention. THZ1 could induce apoptosis and impair the proliferation of Diffuse Intrinsic Pontine Glioma, small cell lung cancer and triple-negative breast cancer in vitro and in vivo [21-23]. It's well to be reminded that the suppression effect of THZ1 is likely to act towards genes that have a subtype of transcriptional enhancers called “super-enhancers” [24]. At present, it's indispensable to find a proper concentration between efficacy and toxicity so as to put THZ1 into clinical use [18]. Because of the wide-range inhibition of transcription, effect on other cell behaviors is waiting to be explored. Nevertheless, the impact of THZ1 on cell differentiation is almost unknown, especially myogenic differentiation. THZ1 is an anti-tumor drug with clinical application prospect, but its application should also consider the impact on cachexia process in tumor patients, especially on the biosynthesis of muscle.

Our study aims at exploring if THZ1 participate in myogenic differentiation. We found apparent inhibiting effect on myogenesis by non-toxic concentration of THZ1.

C2C12 cells (ATCC) was cultured in DMEM medium. The culture and differentiation conditions were following the before [11, 28].

All of four assays were performed as described previously [11, 28-30]. The C2C12 cells were cultured in a 6-well plate and used for the scratch assay when density reached 60%.

Using the methods described previously [11, 28, 29], the apoptosis of C2C12 cells with or without THZ1 was measured by the Multicaspase Kit (Millipore). ROS was detected by the dihydroethidium (DHE; Millipore, EMD Millipore Corporation, Hayward,CA). We determined by MTT (3-(4,5-dimethylthiazol-2-yl)-2,5-diphenyl-tetrazolium bromide) method to measure cell viability.

The isolation and culture of primary myoblasts were performed as described previously [31]. The myoblasts were maintained in growth medium with 20% heat inactive fetal bovine serum.

Each experiment was repeated at least three times, using IBM SPSS Statistics 20 software for statistical analysis. The results are displayed as mean ± standard deviation, the significance of the differences among groups were determined by multiple LSD's multiple-comparison test(one-way ANOVA).Significant P values are shown as P< 0.05 (∗), P< 0.01 (∗∗), P<0.001(∗∗∗) and P> 0.05 (#). 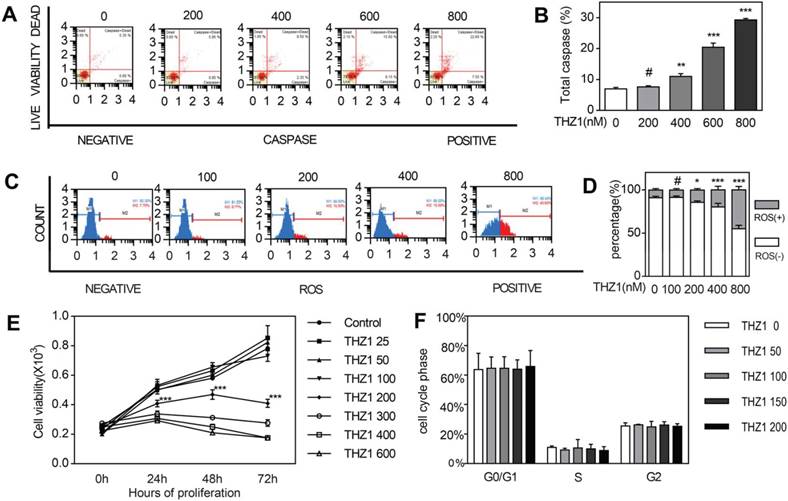 THZ1 inhibited migration of C2C12 cells. (A)Six scratch wounds were made per disk when cell density reached 60%. Growing medium was changed with medium of 3% FBS and 1% penicillin and C2C12 cells were treated with gradient concentration (0, 50,100 nM). Pictures were taken in 12 h, 24 h, 48 h respectively, among which pictures of C0 were taken immediately after the scratch was created.(B)(C)(D) Area taken by cells inside the two black lines was calculated by image. Nine cross points each picture was put into calculation and independent experiment was repeated for three times. (*P<0.05, **P<0.01, n=3, bars represent SD). 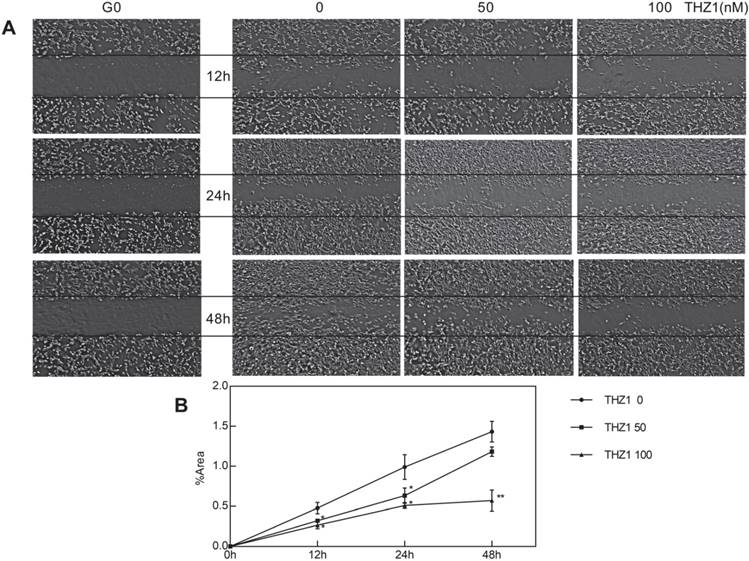 We wondered whether other biological behaviors of C2C12 cells would be affected, particularly migration and differentiation, at a relatively low concentration that did not affect C2C12 cell apoptosis and proliferation. After planting C2C12 cell at the density of 60% and creating scratch, we took photos at the time point 0 h, 12 h, 24 h, 48 h respectively (Fig. 2A). At first, we calculated cell cover area of each picture and found no significant difference, verifying again that cell proliferation wasn't influenced. At each time point, the scratch of THZ1 treated group owned larger area, showing poorer healing ability compared to control group in a dose-dependent manner (Fig. 2B). However, the wound-healing ability of THZ1 100 nM treated group didn't lose totally and until 48 h, the migrating activity was proceeding continuously as time went. 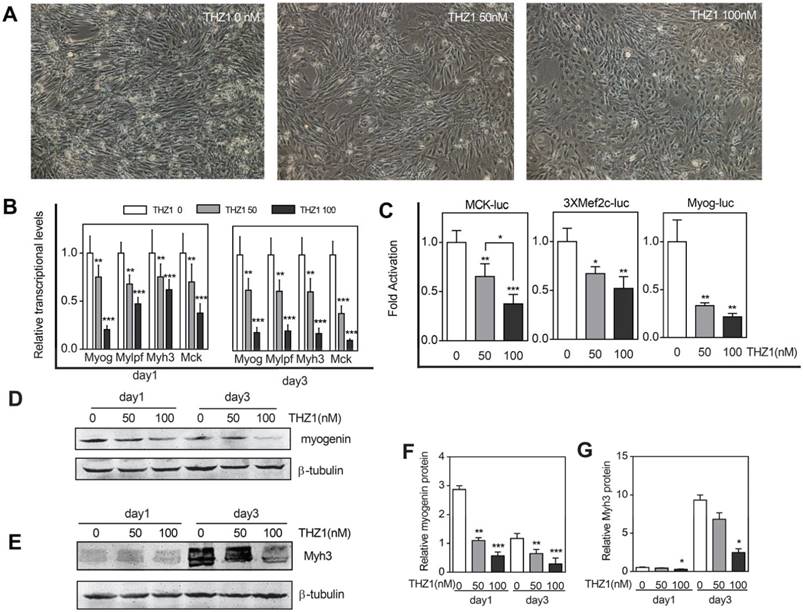 Primary cultured myoblasts were harvested from gastrocnemius and quadriceps muscle of 3-week-old mice and induced to differentiate. One day later, the expression of Myogenin, Mef2c and Myh3 and Mylpf were detected by qRT-PCR (Fig. 4A). The experimental group used THZ1 concentrations of 50 and 100. The results showed that with the drug concentration increased, the expression of the above four genes decreased. At gene start level, we performed luciferase on Mef2c and Myogenin, which are early markers of differentiation (Fig. 4B, 4C, 4D). Compared with Renilla fluorescein, we found that the activation of Mef2c and Myogenin in the drug-treated group decreased. At protein level, we performed western blot of early differentiation marker Myogenin and the result verified the former consequences (Fig. 4E, 4F). 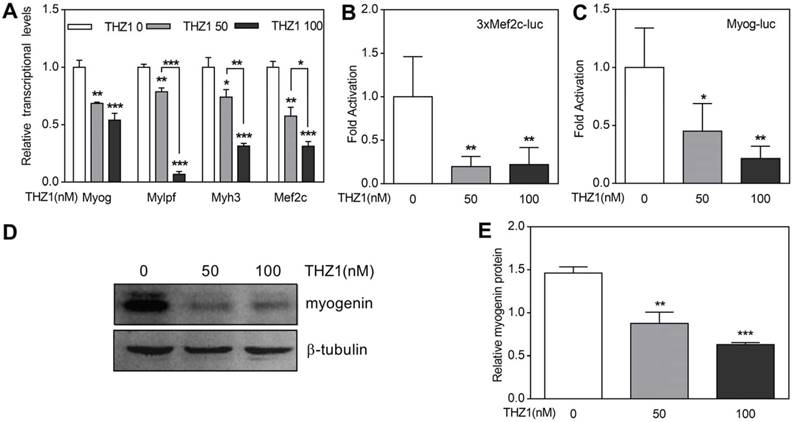 Our study, for the first time, found that THZ1 inhibits the differentiation of C2C12 cells and primary myoblasts at relatively low concentrations, and at this concentration, the cell cycle isn't affected. Higher than the concentration of 400 nM, there's a significant increase in cell apoptosis. Higher than the concentration of 200 nM, the proliferation of cells was inhibited and intracellular oxidative stress increased. At concentrations of 50 and 100, the differentiation of C2C12 cells was inhibited. However, THZ1 is an anti-tumor drug, so we start to think about the most common complication in the course of the tumor- cachexia. Cachexia often reduces the patient's ability to bear radiotherapy and chemotherapy [1]. It can be enlightened from our experimental results that the concentration choice of THZ1 has to take the side effects on the muscles into consideration and slow down the cachexia process. However, it's a long way for THZ1 to go into clinical application and animal experiments and clinical trials support are also in need.

In the scratch test, we observed that THZ1 at a concentration of 50 and at a concentration of 100 resulted in a decrease in cell migration ability. A decrease in the ability to migrate makes it difficult for cells to contact with each other, reducing the signal transduction between cells and thereby suppressing the progress and the outcome of differentiation. That THZ1 reduces cell-cell contact may be one of the mechanisms of differentiation inhibition.