Background: The role of surgery for stage II and III small cell lung cancer (SCLC) remains controversial. The use of prophylactic cranial irradiation (PCI) for resected SCLC was limited. This study aimed to assess the efficacy of surgery in patients with stage II and III SCLC, and evaluate the value of PCI on resected disease.

Methods: A total of 269 consecutive patients with stage II-IIIA SCLC were retrospectively reviewed from January 2010 to December 2015. Of these, 116 patients received surgical resection, and 153 underwent non-surgical treatment. Resected patients were matched 1:1 with non-surgical patients (n=70 in each group).

Conclusions: These findings suggest a potential OS benefit of surgery in stages II and IIIA patients, particularly in selected stage IIIA patients who received adjuvant chemo-radiation and PCI. The use of PCI for surgical patients with stage IIIA was associated with improved OS.

Small cell lung cancer (SCLC) represents approximately 13-15% of all lung cancers [1, 2], and is characterized by rapid growth, early metastases, and poor prognosis [3]. The standard treatment in most of the patients with limited disease SCLC is the combination of chemotherapy and thoracic radiotherapy (RT) [4, 5]. However, local recurrences are reported to be as high as 50%, and the overall prognosis is poor [6-8]. Two randomized clinical trials (RCT) performed two decades ago have proven that there is no survival advantage of surgery compared with non-surgical treatment [9, 10]. However, recent data from some retrospective studies including several population database studies have demonstrated a potential benefit from surgery in patients with limited disease [11-19].

The positive role of prophylactic cranial irradiation (PCI) on long-term survival has been established for nonsurgical patients with limited disease and has been recommended by NCCN for patients who respond to treatment [20]. However, few studies have assessed the use of PCI for resected SCLC. Several retrospective studies have investigated the risk of brain metastasis according to the stage, but showed inconsistent results [21-25]. The value of PCI in this population needs further investigation.

Hence, this study aimed to assess the efficacy of surgery in stage II to III SCLC and evaluate the role of PCI in patients with resected SCLC.

Between January 2010 and December 2015, 335 consecutive patients with limited stage SCLC were initially treated at our hospital. Most of the patients underwent standardized evaluation including thoracic and abdominal CT scanning or abdominal ultrasonography, brain magnetic resonance imaging (MRI) and bone radionuclide imaging, confirming the disease stage as stage II to III. TNM staging was determined according to the newly revised classification for lung cancer (American Joint Committee on Cancer seventh edition) [26]. Patients were excluded if they had stage IIIB disease (n=46), without pathological identification (n=5), who underwent incomplete resections (n = 4), who lost to follow-up or with missing or erroneous data (n = 11). After excluding, a total of 269 patients were included in this study. Of these, 153 underwent non-surgical treatment, and 116 received surgical resection. This retrospective study was approved by the Regional Ethics Committee of our institution, in compliance with the Helsinki Declaration (1996).

The last follow-up date was February 28, 2018. Most of the patients were followed up every 3-6 months for the first year, every 6 months for the next 2 years, and then annually until death. Survival information was collected via telephone if the patient could not visit the clinic on schedule.

Statistical analysis was performed using SPSS software version 24.0 (SPSS, Inc., Chicago, IL, USA). Overall survival (OS) was defined as the time from the initiation of treatment until death from any cause. Analysis of OS was carried out using the Kaplan-Meier method, and the difference between survival curves was tested by log-rank test. Variables with P < 0.1 were included for multivariate analysis using the Cox regression model. To reduce the effects of selection bias and confounding factors, propensity score matching (PSM) was performed to compare the groups. Patients were matched according to the propensity scores based on age, sex, TNM stage, and ECOG score with 1:1 ratio using the nearest neighbor matching method [27]. For all analyses, P < 0.05 was considered statistically significant.

Characteristics of the study population before and after matching

Characteristics of the study population before and after matching between surgical and NST groups.

The initial treatment before and after matching

Analysis of factors related to OS

Univariate analysis of all and matched patients demonstrated that surgery (P=0.029 and P=0.009) and PCI (P=0.03 and P=0.037) were significantly associated with improved OS (Tables 4, 5). Lower TNM stage was significantly considered to be a positive prognostic factor for all patients (P=0.024; Table 4). 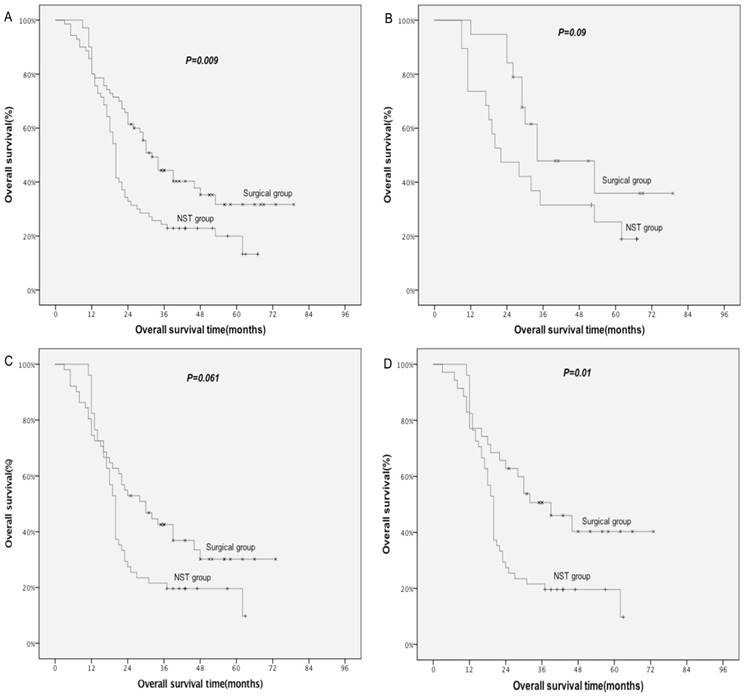 The role of surgery for limited-stage SCLC remains controversial due to lack of conclusive evidence. A recent review by Barnes et al. examined three RCTs [9, 10, 28] that evaluated surgery versus nonoperative management for SCLC [29]. The study concluded that the current evidence does not support a role for surgical resection in the management of limited-stage SCLC. However, these RCTs were conducted more than two decades ago were of very low quality and had some limitations. For example, for the Fox' trial [9], chemotherapy was not included as part of the standard treatment protocol, and only 34/71 participants underwent surgical resection in the surgical arm. Since the time these trials were conducted, there have been many developments in SCLC therapy such as modern RT technique, and better diagnostic and surgical tools. Recently, data from a series of observational studies have supported a role for surgery in the management of limited-stage SCLC [11-19]. In the present study, the 1-, 3- and 5-year OS rates in surgical group were significantly higher than in non-surgical group. The survival benefits from surgery were maintained in the propensity matched patients.

Univariate and multivariate analysis of factors related to OS (before matching, n=269)

Univariate and multivariate analysis of factors related to OS (after matching, n=140)

Comparison of OS by PCI for surgical patients. A: all patients; B: patients with stage IIIA. PCI: prophylactic cranial irradiation.

Comparison of survival by PCI

As SCLC responds well to chemotherapy and radiotherapy, surgery is considered to be a standard treatment option mainly for early stage SCLC. Current NCCN guidelines have recommended surgical resection for clinical stage I (T1-2, N0) disease [20]. However, no consensus was drawn for the role of surgery in stage II and stage III diseases. Gaspar, et al. [30] analyzed the National Cancer Database (NCDB) and found that surgery was significantly associated with improved survival in patients with stage II and stage III SCLC. Conversely, another NCDB based Propensity-Matched Analysis for limited-stage SCLC [11] showed that surgery was related to longer survival time for stage I patients, but survival differences were attenuated for stage II and IIIA. However, in their study, only 35.5% received lobectomy, and less than 50% of stage IIIA surgical patients were adjusted for chemo-radiation. A retrospective analysis of the Surveillance, Epidemiology, and End Results (SEER) between 1988 and 2002 identified 863 patients with SCLC who underwent surgery [13]. Results revealed that lobectomy was associated with the best outcomes, and there was a significant survival benefit from the addition of PORT in patients with N2 disease. In our study, most of the matched surgical patients with stage IIIA were adjusted for chemo-radiation, and all surgical patients underwent complete tumor resection, and 85.7% of them received lobectomy. All these findings might help to improve OS for surgical patients. We found a marginal OS benefit from surgery for stages II and IIIA patients. In further subgroup analysis of stage IIIA, a significantly improved OS from surgery was observed in patients who received adjuvant chemo-radiation and PCI (P=0.01). These results suggested a potential OS benefit of surgery in stages II and IIIA, particularly in selected stage IIIA patients.

The positive role of PCI has been recognized for patients with limited SCLC who respond to treatment. However, few studies have investigated the value of PCI for resected disease. Several scholars have retrospectively assessed the risk of brain relapse after surgery for limited SCLC, suggesting that PCI might have a role in surgically resected stages (p-stage) II and III patients because of their relatively high frequency of brain metastasis, but not for stage (p-stage) I disease due to lower incidence of brain metastases [22-25,31-32]. In the present study, PCI was considered to be an independent prognostic factor for OS. Improved OS related to PCI was found for non-surgical patients, but not for surgical patients. However, further subgroup analysis showed a survival advantage with the use of PCI in patients with stage IIIA (P=0.047).

Our study has several limitations. Firstly, this is a retrospective analysis. However, we performed PSM, which eliminated potential bias by creating two comparable groups. Secondly, modern tools such as positron emission tomography-computed tomography (PET-CT) or mediastinoscopy were not routinely used. Therefore, the diagnosis of clinical stage was less accurate.

In summary, these results suggest a potential OS benefit of surgery in stages II and IIIA patients, particularly in selected stage IIIA patients who received adjuvant chemoradiotherapy and PCI. The use of PCI for surgical patients with stage IIIA was associated with improved OS. Further prospective RCTs are needed to confirm these findings.