This is an open access article distributed under the terms of the Creative Commons Attribution (CC BY-NC) license (https://creativecommons.org/licenses/by-nc/4.0/). See http://ivyspring.com/terms for full terms and conditions.
Citation:
Zhuang H. Research progress on the impact of radiation on TKI resistance mechanisms in NSCLC. J Cancer 2018; 9(20):3797-3801. doi:10.7150/jca.26364. Available from https://www.jcancer.org/v09p3797.htm

Resistance to tyrosine kinase inhibitor (TKI) therapy is often accompanied by various genetic alterations, and radiation is an important weapon for changing the DNA of tumor cells. In radiotherapy combined with TKI therapy for non-small cell lung cancer (NSCLC), the two treatment strategies affect and interact with each other, resulting in complex tumor resistance mechanisms. Accordingly, tumor progression management after radiotherapy combined with TKI therapy should be different from that after TKI therapy alone. However, current clinical practice is entirely based on the resistance mechanisms of simple TKI therapy. Therefore, it is imperative to investigate the impact of radiation on the mechanism of TKI resistance. However, due to the complexity of the resistance mechanisms under the combined effect of both therapies, such studies remain extremely challenging and time-consuming.

1.1. Alteration of the gene on the target site

The long-term effects of TKI on epidermal growth factor receptor (EGFR) target can lead to a loss or reduction in the binding force between TKI and the binding site of the target molecule. This in turn reduces the efficacy of TKI therapy and causes drug resistance. For example, T790M is a site in the EGFR exon 20, and long-term TKI treatment may cause point mutation at this site, thereby changing the crystal structure of the binding pocket for adenosine triphosphate (ATP) in the kinase domain and so that the binding of TKI with the kinase domain is blocked. In addition, mutation L858R together with T790M may enhance the affinity for ATP compared to that of L858R alone. Additionally, TKI is an inhibitor of ATP competitive kinase, which leads to a lower binding rate of TKI and the kinase domain, and result in the secondary resistance [7-10].

1.2. Alteration of the downstream gene of the target site

The efficacy of TKI requires signal transduction to the nucleus via downstream pathway of the target site. An abnormality of any site in the downstream pathway could have impacted the efficacy of TKI. For example, K-ras is a key gene in the downstream portion of the EGFR signaling pathway, and the mutated K-ras gene can directly activate the (mitogen-activated protein kinase, MAPK) signaling pathway without activating the upstream EGFR pathway, leading to the proliferation and metastasis of tumor cells. K-ras gene mutation is another important molecular mechanism of primary EGFR-TKI resistance [11, 12]. Additionally, a change in any site in the downstream EGFR pathways, similar to K-ras, affects the TKI efficacy and causes resistance.

1.3. Activation or amplification of alternative pathways

Pathways are complex networks. If one pathway is blocked, the remaining associated alternative pathways may be activated to maintain the growth and proliferation of tumor cells, i.e., when the EGFR-RAS-MAPK pathway has been blocked by TKI for an extended period of time, alternative pathways maybe activated. The most typical alternative is the PI3K-AKT-mTOR pathway. When EGFR is blocked, the phosphorylation levels of AKT and mTOR are enhanced, and the activity of the PI3K-AKT-mTOR pathway is significantly increased, there by establishing TKI resistance [13-15]. Another example is C-MET, when C-MET is amplified, the downstream PI3K-AKT-mTOR pathway may also be activated, thereby triggering TKI resistance [16,17]. Thus, this is similar to a river, wherein if the main river is blocked, the formation of tributaries is inevitably given sufficient time. Alternative pathways are also important mechanisms of TKI resistance.

The mechanisms of resistance in tumor cells are extremely complex, and many mechanisms still remain unclear. In addition to the above three mechanisms, there are other mechanisms influencing the formation of TKI resistance, such as the conversion between different pathological types as well as other drug-related pathways. These mechanisms remain poorly understood.

2. Effects of radiation on genetic alterations

Radiation mainly targets DNA, and therefore, radiation is an important weapon for altering genes. Previous studies have demonstrated the effects of radiation on DNA damage repair, the expression of cell cycle proteins and apoptosis-related proteins, and the growth and proliferation of tumor cells [18-20]. These genes may be cross-linked with EGFR pathway, thereby affecting TKI resistance and the efficacy of treatment after the development of resistance. However, due to the complexity of the tumor pathways, further research in this area is expected.

2.2. Changes in radiation sensitivity-related genes during irradiation cause radiation resistance

The radiation sensitivity of tumor cells is different from that of normal cells, and several genes are involved in this sensitivity. For example, when EGFR is highly expressed in tumor cells, the tumor tends to have a high level of resistance to radiation therapy. When radiation acts on the tumor cells, EGFR can enter the nucleus by a coupling process. In this process, Ku70/80 and phosphatase-21 can enter the nucleus together with EGFR, resulting in an increase in DNA-PK activity. This subsequently increases the radiation resistance of the tumor cells[21,22]. In addition, cell lines with KRAS mutations may also regulate the expression of EGFR ligands, thus affecting the PI3K-AKT pathway and causing radiation resistance[23]. In fact, the survival of cells with different expression levels of sensitive genes following irradiation involves the process of killing tumor cells by radiation and the process of self-selection in tumor tissues under external conditions, thus establishing radiation-resistant cells. The genetic characteristics of radiation-resistant cells may also have an impact on the resistance and efficacy of TKI.

3. The interaction of radiation-related genetic alterations and TKI resistance mechanisms

Previous studies have shown that the radiation sensitivity of various lung cancer cell lines with EGFR mutations was higher than that of the wild-type [24]. In addition, the results of a clinical study also suggested that when the lung cancer patients with brain metastasis underwent whole-brain radiotherapy, EGFR mutation was an independent factor that influenced the clinical response[25]. Further research demonstrated that the radiation sensitivity of NSCLC with EGFR mutation is closely related to its non-homologous end joining (NHEJ) dysfunction. After ionizing radiation, EGFR mutant cell lines and human bronchial epithelial cells (HBECs) with ectopic mutation in the EGFR gene could not effectively conduct EGFR nuclear translocation. Then the EGFR was unable to bind to the DNA-PK repair protein, thus greatly diminishing the DNA damage repair ability of the NHEJ pathway and enhancing radiation sensitivity [26]. The Ras/Raf/MEK/ERK and PI3K/AKT pathways on which the mutant EGFR is dependent are important means of repair via homologous recombination (HR); however, no relevant research on the relationship between EGFR mutations and HR has been reported yet. In addition, under radiation, the proteins for DNA damage repair (e.g., DNA-PKcs and Rad51) may also differ in their expression level or function [27]. All these potential mechanisms require further study.

3.3. The presence of cross-signaling pathways for radiation and TKI resistance

3.4 Influence of the schedule of radiotherapy and TKI application on the mechanisms of drug resistance

In clinic practice, the key problem about the combination of TKI and radiotherapy was the combination mode especially for optimal timing of these therapeutic regimens like in treatment of thoracic radiation and brain metastases. Magnuson WJ et al. demonstrated that the use of upfront RT or upfront EGFR-TKI is associated with different OS in patients with EGFR-mutant NSCLC who develop brain metastases [33,34]. It may be that these mechanisms affect the combination schedule and effect. Similarly, if radiotherapy was used first, the tumor gene may have changed, and then TKI was applied. The mechanism of drug resistance was also based on the gene after radiotherapy. By the same token, if patients first used TKI and then radiotherapy, or used together, the final resistance mechanism may also be different. In addition, the mechanism of drug resistance was a dynamic process. The schedule of participation should have an impact on the drug resistance mechanism after radiotherapy combined with TKI treatment.

4.1. Identifying the breakthrough point in the study of the impact of radiation on TKI resistance mechanisms 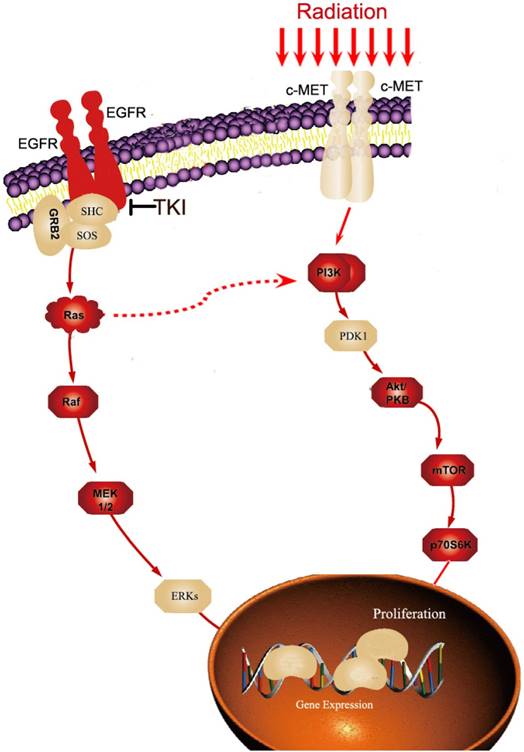 4.2. Detection of the resistance mechanisms under the combined effect

First, for either TKI or radiation, the resulting genetic alteration of the tumor cells has its own independent process. The changes in its mechanism under the combined effect may be different from those under the single treatment. Therefore, accurate identification of the temporal effects of gene alterations under the combined effects of the two treatments is one of the difficulties in determining the resistance mechanisms. Second, the current detection of resistance mechanisms requires the accumulation of a large number of specimens to obtain a relatively precise conclusion. However, in clinical practice, patients receiving combined therapy often require long-term treatment, and thus, re-sampling for pathological detection at the disease progression site is often difficult, leading to a greater challenge in the detection of resistance mechanisms. Third, the selection of the detection methods is also a matter of concern. If the specimens are not easily available, blood tests appear to be the ideal alternative. However, the sensitivity of blood tests may introduce a new issue to the study of resistance mechanisms [34-36].