A Prognostic Nomogram for Cervical Cancer after Surgery from SEER Database

Methods: A total of 8202 cervical cancer patients with pathologically confirmed between 2004 and 2014 were obtained from the Surveillance, Epidemiology, and End Results (SEER) database. All the patients were divided into training (n=3603) and validation (n=4599) cohorts based on consecutive age of diagnosis. Demographic and clinical pathological factors were evaluated the association with overall survival (OS). Parameters significantly correlating with OS were used to create a nomogram. An independent external validation cohort was subsequently used to assess the predictive performance of the model.

Results: In the training set, age at diagnosis, race, marital status, tumor grade, FIGO stage, histology, size and LODDS were correlated significantly with outcome and used to develop a nomogram. The calibration curve for probability of survival showed excellent agreement between prediction by nomogram and actual observation in the training cohort, with a bootstrap-corrected concordance index of 0.749(95% CI, 0.731-0.767). Importantly, our nomogram performed favorably compared to the currently utilized FIGO model, with concordance indices of 0.786 (95% CI, 0.764 to 0.808) vs 0.685 (95%CI, 0.660 to 0.710) for OS in the validation cohort, respectively.

Conclusions: By incorporating LODDS, our nomogram may be superior to the currently utilized FIGO staging system in predicting OS in cervical cancer patients after surgery.

Traditionally, lymph node status is considered as one of the most important clinical parameters in the treatment determination and prognosis for cervical cancer[2]. The number of positive lymph node (PLNs) is the main factor affecting the 5-year overall survival rate of cervical cancer patients[3, 4]. The current International Federation of Gynecology and Obstetrics(FIGO) staging system does not assess lymph node status, though this feature is a prognostic factor and the 7th edition of the American Joint Committee on Cancer(AJCC)/Union for International Cancer Control(UICC) staging system only classifies the lymph nodes as N0 (negative) or N1 (positive)[5, 6].Currently, lymph node status is always based on PLN regardless of the number of resected lymph node (RLNs) in cervical cancer patients[7, 8]. In early stage cervical carcinoma, the 5-year overall survival rate of patients with lymph node positive was reported to be around 50%, while that of non-lymph node metastasis was more than 90%[9]. However, in the clinical practice clinicians demonstrate that lymph node status might not sufficiently be reflected by the number of the positive lymph nodes.

Recently, the lymph node ratio (LNR) that is the ratio of PLNs to RLNs, and log of odds between PLNs and the number of negative lymph node (LODDS) have emerged as alternative predictive factors for outcomes and showed superiority to lymph node status-based assessment in pancreatic cancer[10, 11], oral cancer [12, 13], non-small cell lung cancer [13],colorectal cancer[14], ovarian cancer[15], breast cancer[16]. LNR was also studied in ovarian cancer and found to be superior to both PLN and RLN in predicting survival [17, 18]. LODDS is defined as log ((the number of PLNs +0.05)/ (the number of negative nodes +0.05)). While this parameter has been validated in predicting survival for breast cancer, its utility in cervical cancer still remain unclear [19-21].

In this study, we hypothesized that LODDS might be an important prognostic predictor and has better predictive performance than LNR in cervical cancer patients. In addition, a nomogram incorporating LODDS may be superior in this respect to the currently-utilized FIGO score staging system.

We identified cervical cancer cases from the SEER program of the National Cancer Institute (http://seer.cancer.gov/). Inclusion criterion is that all patients who were pathologically confirmed with cervical cancer from the SEER database from 2004 to 2014. Exclusion criteria are as follows: unknown age of diagnosis; uncertain race; unknown marriage status; undetermined grade; unknown stage; unspecified neoplasms; unknown tumor size; unknown or incomplete lymph node status. Finally, a total of 8202 cervical cancer patients were included in this study. These patients were divided into training and validation cohorts based on consecutive age of diagnosis (training cohort between 2004 and 2008, N=3603; validation cohort between 2009 and 2014, N=4599). In our study, 'married' was recorded as married and unmarried but having domestic partner; single was recorded as 'single'; separated, divorced and widowed were classified as “others”. Except squamous cell neoplasm and adenomas and adenocarcinomas, other histology types were recorded as “other”.

Categorical measurements were described as count and percentage, while continuous measurements were presented as mean and range. The chi-square was used to compare the categorical measurements, while t test for continuous ones. The optimal cutoff point for LODDS was determined by ROC curve in training cohort with the package of survivalROC in R. The nomogram was built with potential risk factors (P <0.05) based on multivariate Cox analysis in the training cohort with the package of rmsin in R. The predictive performance of the nomogram was measured by concordance index (C-index) and it compared nomogram-predicted survival probability with observed Kaplan survival probability. C-index comparisons between the nomogram and FIGO staging system were performed using thercorrp.cens package in Hmisc in R. The larger the C-index, the more accurate for the prognostic prediction. The predictive performance was validated by an independent external cohort. All statistical analyses were performed in R version 3.3.3 (http://www.r-project.org/).

In order to facilitate the application of LODDS in clinical practice, we dichotomized LODDS into high LODDS and low LODDS based on the optimal cutoff from ROC curve. In our training cohort, the optimal cutoff was -4.394. We further validated the predicting performance of binary LODDS in an independent external dataset.

Independent Prognostic Factors of OS in the Training Cohort 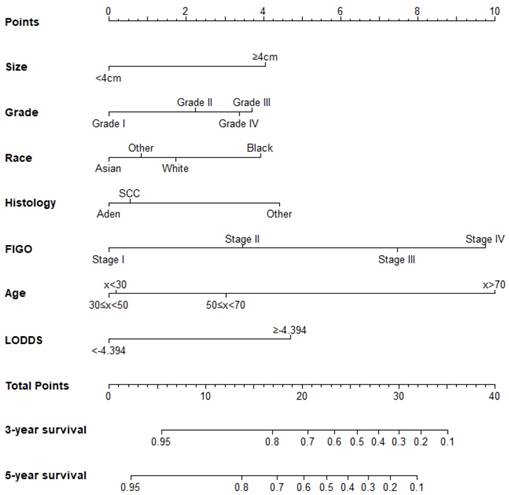 The present study suggested that age at diagnosis, race, grade, FIGO stage, histology, tumor size, LODDS were independent prognostic factors of OS in cervical cancer after surgery. The nomogram was created based on these prognostic factors and was used to predict the 3-year and 5-year OS after surgery in the cervical cancer patients. In the training and validation cohorts, the nomogram showed better predictive performance than the FIGO staging system for OS.

To our knowledge, PLNs have been reported as a prognostic factor for cervical cancer. However, PLNs, part of RLNs, do not fully reflect the disease state in all situations[26]. Therefore, it is important to take simultaneously PLNs and the number of negative lymph nodes consideration for predicting the prongosis of cervical cancer. LODDS is an intuitive indicator that is reflective of both PLNs and the number of negative lymph nodes and it has been used to predict the prognosis of survival in other cancers. From out study, it is found that LODDS is an independent prognostic factor of cervical cancer and we take -4.394 as the optimal cutoff point for the LODDS based on ROC curve analysis from the training cohort. Meanwhile, we fully verify the nomogram accuracy with this optimal cutoff in an independent external cohort. From the created nomogram, females younger than 30 years old have higher score than older than 30 but younger than 50 years old, though this former group have no significance.

FIGO staging is the most common staging system for cervical cancer, so we compared C-index of the nomogram with that of FIGO stage and found that the C-index for the nomogram to predict OS were 0.749, 0.786 respectively in the training cohort and the validation cohort and higher than FIGO. In addition, the calibration plots represented that a perfect match between the nomogram predicted probability and the actual probability calculated by Kaplan-Meier analysis, especially for 3-year survival. These results showed that our nomogram could be used in practical work with less bias and better accuracy. In addition, we used the nomogram to calculate 3-year and 5-year survival rate individually so that the nomogram can help clinical make a more reasonable follow-up plan.

There are still several limitations that must be considered though the nomogram model demonstrated good accuracy for predicting OS. Firstly, the C-index of the nomogram is good but not excellent. Secondly, there are many factors may influence that may influence prognosis of postoperative cervical cancer patients so that further research should be carried to improve the nomogram.

In summary, our study demonstrated that age at diagnosis, race, grade, FIGO stage, histology, tumor size, LODDS are independent prognostic factors of OS in cervical cancer. In addition, we created the nomogram based on LODDS to predict estimate 3- and 5-year OS among postoperative cervical cancer patients which had good accuracy. 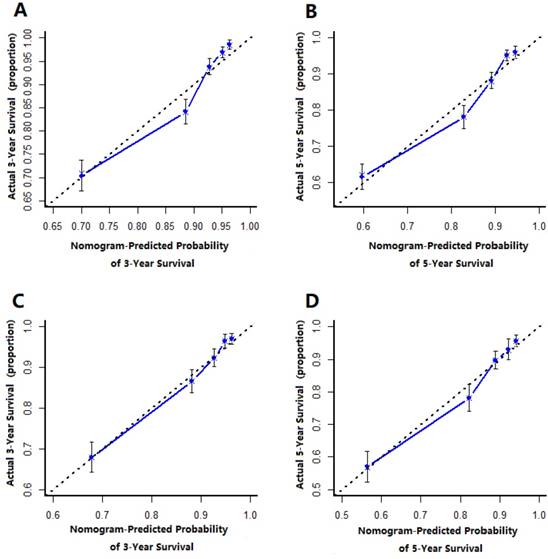 6. Edge SB, Compton CC. The American Joint Committee on Cancer: the 7th edition of the AJCC cancer staging manual and the future of TNM. Annals of surgical oncology. 2010;17:1471-4