Background: Tumor deposits are one of the promising factors among the different edition of Tumor, Node, Metastasis classification. Despite improvement in the treatment of various types of metastatic disease the source and prognostic significance of tumor deposits in staging has not been deliberating the agreeable opinion. We investigated the possibility of tumor deposit as independent prognostic factor and evaluating its prognostic value in colorectal carcinoma patients.

Conclusion: We have shown that TDs are not equal to lymph node metastasis with respect to biology and outcome. Tumor deposits are an independent adverse prognostic factor in CRC patient who have undergone radical resection.

Colorectal cancer is one of the most prevalent malignancy in Gastrointestinal tract (GIT) worldwide. It is the 2nd most common cause of death in western society with an estimated 140,250 new cases and an estimated 50,630 deaths for both the sexes in united states[1]. It is the third most common cause of cancer death globally, and both the sexes have an approximately 5% chance of developing bowel cancer in their lifetime[2]. Colorectal cancer is most frequently diagnosed among adults aged 65 to 74 years; the median age at death from colorectal cancer is 73 years [3]. Generally, persons over age 50 are more vulnerable to develop the disease; however the prevalence is rising in the younger population globally[4]. Colorectal cancer mortality rate are decreasing overall globally despite increase in incidence[5], yet, in some countries, probably due to fewer resources in screening for the disease, incidence rates and mortality are increasing[6]. Good prognosis is observed in colorectal cancer if diagnosed early, and it is likely to respond to effective treatment, resulting in increased survival time, less morbidity, and cost efficiency treatment.

Since 20th century, peri colorectal adipose tissue in colorectal cancer has been recognized as tumor deposits[7]. Tumor deposits are fairly small bits of tumor that are found in the adipose tissue outside the colon or rectum, but are not in lymph nodes. Discussion about tumor deposits regarding nodal staging has created an international debate. The TNM 6th edition states that tumor deposits in pericolic and meso-rectal fat with primary tumor are counted in positive lymph node group, but irregular tumor deposits with a form consistent lymph nodes and venous invasion are placed in the T-category [8]. The American Joint Committee on Cancer Staging Manual 7th Edition (AJCC 7th TNM) and college of American Pathologist cancer protocol has defined pericolic or perirectal fats having discontinuous tumor spread, extravascular spread with venous invasion or totally replaced lymph nodes strongly suggest the tumor deposits[9, 10]. T category lesions (T1 and T2) lacking positive lymph nodes but having tumor deposits has been classified as pN1c[9]. The aim of cancer staging is to deliver the evidence and guidelines for making accurate clinical decisions in treatment of cancer patients and giving prognosis opinions. Several researchers have shown that the presence of TD is associated with poor disease-free survival (DFS) and overall survival (OS)[11].

In the present study we retrospectively analyzed the medical records of all newly diagnosed CRC patients between February 2011 to June 2015 in Shanghai East Hospital, affiliated with Tongji University. The diagnosis of CRC was confirmed according to the histological evidence contained in the 7th edition of the TNM/AJCC classification. The presence of tumor deposits was reviewed for all patients along with other pathological factors. Irregular deposits, either microscopic or macroscopic, spotted in pericolic or perirectal adipose tissue in the bowel specimen without lymphocytic entireties or in the mesocolic/mesorectal specimen with no association of organized lymphoid tissue and without thick bundles of collagen fibers were counted as tumor deposits (TNM6). Similarly, cancer deposits adjacent to metastatic lymph nodes presumed to be in the process of lymph node metastasis but limited in lymphatic or venous structure or having tumor foci less than 5 mm from the predominant edge were not supposed to be tumor deposits[12-14]. Every patient slide was reviewed, and their baseline information, along with age, sex, tumor grade, histological type, invasion depth, number of lymph nodes excised, number of positive lymph nodes, vascular invasion and perineural invasion were collected for final analysis.

Patients were followed up regularly according to NCCN guidelines. Physical examination, and serum tumor markers, including CEA, were achieved every 3 to 6 months. Colonoscopy was performed at the 1st and 2nd year after surgery. CT-scan- chest/abdomen/pelvis surveillance was performed annually. As this study described the prognosis of patients with CRC, we determined DFS events and performed the analysis. Disease-free survival (DFS) was defined as the time from treatment to first recurrence, death of any cause or until the date of last follow up.

Statistical evaluation was conducted with SPSS 23.0 (SPSS, Chicago, IL), χ2 test and multivariate logistic regression analysis were used to analyze the relationship between clinicopathological parameters and tumor deposits. The presence of TDs (using various definitions in the literature) and their relation to survival was carried out using Kaplan-Meier curves, and the difference of variables were compared using log-rank tests. Univariate analysis was used to figure out the association between various prognostic predictors and DFS. The prognostic factors with P<0.10 in univariate analysis were further analyzed through multivariate analysis by using Cox proportional hazard model using stepwise selection to identify independent predictors. All confidence intervals (CIs) were stated at the 95%confidence level. Two-sided P-values were calculated, and for independent prognostic predictors associated with DFS, P<0.05 was considered statistically significant.

Analysis of disease free survival according to the status of tumor deposit in CRC patients. 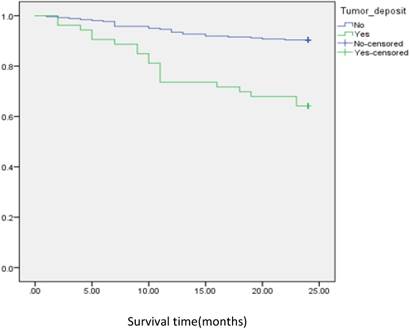 Analysis of disease free survival according to the status of tumor deposit in metastatic CRC patients with positive lymph node. 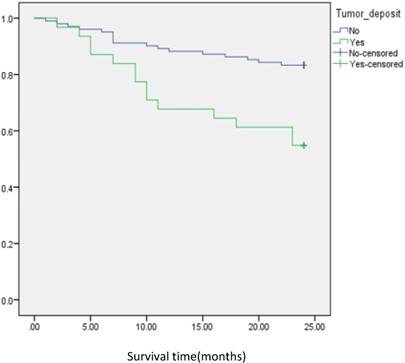 In the past few decades, there has been considerable improvement in overall survival rate in CRC patients; however, multiple questions remain to be solved regarding histopathological and predictive factors. Despite the presence of TDS in some studies that have demonstrated independent prognostic value, it is not sufficient to clear the confusion.

Analysis of disease free survival according to status of tumor deposit in metastatic CRC patients with negative lymph node. 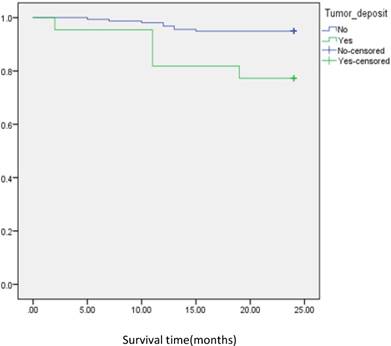 Analysis of disease free survival according to status of tumor deposit in metastatic CRC patients with positive lymph node count <5. 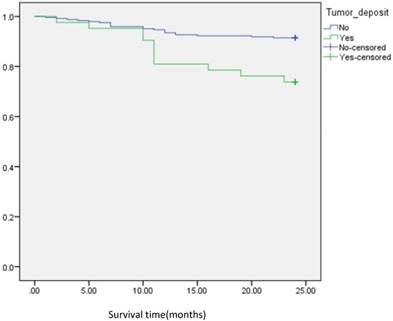 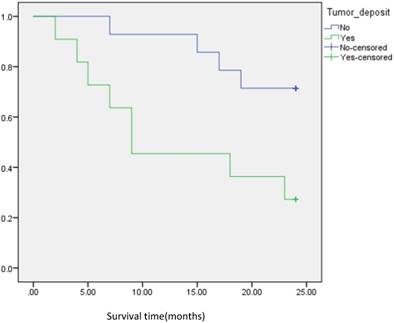 The existence of PTDs has been termed “vascular tumor dissemination” since 1935; however there was uncertainty with discontinuous adenocarcinoma along with lymph nodes[7]. Based on patient survival data, the 1997 TNM staging system for colorectal cancer put forward the idea of 3mm rule regarding positive tumor deposits. A PTD greater than 3 mm was classified as regional lymph node metastasis, and PTDs equal to or less than 3mm were classified as discontinuous T3 adenocarcinomas[15]. This interpretation was replaced in TNM 6th edition which described the number of the nodules. The form and smooth contour of TDs without histological evidence of lymph nodes were reported as LNMs, whereas irregular TDs were defined as venous invasion and T-category[8]. The current TNM/AJCC 7th Edition defines primary carcinomas with tumor deposits in peri-colorectal adipose tissue and lymph drainage sites with no histologic evidence of lymph node residues as possibly indicating discontinuous spread, venous invasion or a totally replaced lymph node.

In such circumstances, the TDs would otherwise be recognized as T1 or T2 without changing T-classification, likewise, TDs nodules are included in N1c category stage III[9, 16]. The modification in definitions of TNM/AJCC staging has created a confusion concerning patients' prognosis and postoperative chemoradiotherapy.

In this study, we investigated the prognostic significance of TDs in Colorectal cancer. Ono C et al. reported that TDs occur from 17% to 55% in colon and 6% to 64% in CRC[17] .Similarly, mayo at el exhibit that TDs is associated with worse 3-years OS in patients of any known and unknown N categories.[18]. However, Some studies observed diagnostic clarity and prognostic accuracy with positive tumor deposits, regardless of contour classification based on N-type, make the tumor staging system efficient[19]. In contrast, the prognostic information of TDs will be missed if TDs are allocated with nodal category N1c and only TDs in the absence of LNM are considered[20]. Our Data signify that TDs are an independent prognostic factor associated with metastatic diseases, along with vascular invasion and the number of lymph node metastases among CRC patients. This result illustrates that the relationship between TDs accompanying with neural invasion and lymph node metastasis might be an invasive epicenter which appears from lymphatic channels and nerve sheath infiltration as an aggressive tumor cell. In similar articles, Ratto C et al. has described the question about the origin of aggressive tumor cells[21].

This study justifies the validity of positive TDs with a worse outcome for CRC patients. Similar findings from separate studies have demonstrated that TD-positive patients have a tendency toward worse outcomes than TDs negative patients[22]. In addition, several research studies have demonstrated the prognostic value of TDS but have not clarified whether TDs should be considered as positive lymph node in CRC[11, 22, 23]. At the same time, some research has focused on considering TDs independently from lymph node metastasis (LNM) because of possible differences in the impact on survival between these two modes of discontinuous spread[24, 25]. Accordingly, there remains confusion whether TDs should be considered as positive lymph node in CRC using the N1a, N1b or N2 category. For any known or unknown N category, our data showed that TDs are associated with worse 2-years DFS. Mayo et al. has similar speculation regarding N category and association of TDs with worse survival outcome. TDs may be associated with a risk of all cause death or cancer specific death similar to positive lymph node in all N categories[18].

Several findings suggest the increasing numbers of PTDs in CRC patients are associated with decreased survival and intra-abdominal metastases[26]. The origin of TDs is diverse, it is accepted that PTD have a component of large vessels, perineural or intravascular adenocarcinoma[26, 27]. Our analyses ascertain that TDS are not LNMs, they should be considered independent prognostic indicators which give a concise layout concerning progression of the disease and various endpoints. Furthermore, TDs along with vessels and nerves exhibit worse prognosis if compared with LNMs alone.

In conclusion PTDs in pericolonic and mesorectal adipose tissue are invasive adenocarcinoma nodules, developing along large vessels, nerves or straight out from intravascular growth. The presence of tumor deposits was an independent adverse prognostic factor for CRCs patients. The result showed TDs are associated with disease free survival (DFS) in the patient cohort who underwent radical resection separate from lymph node metastasis, regardless of number and size of metastases. Our study was a single- institution retrospective study with a small sample size. To minimize interobserver variation, more exploration and research need to be done to give patients more recognizable diagnosis and resolve a disputes or controversies concerning tumor deposits.

13. Nagayoshi K, Ueki T, Nishioka Y, Manabe T, Mizuuchi Y, Hirahashi M. et al. Tumor deposit is a poor prognostic indicator for patients who have stage II and III colorectal cancer with fewer than 4 lymph node metastases but not for those with 4 or more. Diseases of the colon and rectum. 2014;57:467-74