Background: Oxaliplatin and capecitabine (CapeOX) combined with cetuximab is rarely used to treat advanced and metastatic colorectal cancer (mCRC). The present study aimed to clarify the clinical benefits of this treatment regimen when used as a first-line therapy in patients with expanded RAS/BRAF/PIK3CA wild-type mCRC, using the data and tumor specimens from two previously published Phase II clinical trials.

Conclusions: Patients with RAS/BRAF/PIK3CA wild-type mCRC had a sufficient RR following first-line treatment with CapeOX + cetuximab. These results suggest that this combination therapy should be considered as a treatment option for patients with advanced mCRC.

The chemotherapeutic agent cetuximab binds to the extracellular domain of the epidermal growth factor receptor (EGFR), thereby inhibiting ligand binding and preventing signaling pathways required for cell proliferation, survival, and metastasis [1]. In the clinical setting, cetuximab improves the survival outcome of patients with metastatic colorectal cancers (mCRC) either in combination with cytotoxic agents or as a monotherapy [2-4]. However, cetuximab monotherapy provides no clinical benefits to mCRC patients with KRAS mutations [5]. BRAF, PIC3CA, and extended RAS mutations are also predictors of poor tumor response to cetuximab [6-8].

Cetuximab treatment is often provided with cytotoxic doublets. Combination therapy using oxaliplatin and orally administered capecitabine, known as CapeOX (or CAPOX), uses the central venous access port less frequently than combined 5-fluorouracil/leucovorin (5FU/LV) and oxaliplatin (FOLFOX) therapy [9]. This confers a significant advantage to patients as they are less likely to suffer catheter-related complications, such as infection, deep venous thrombosis, and catheter obstruction. Due to the comparable efficacy of CapeOX to FOLFOX treatment [10], the CapeOX regimen is often chosen as patients prefer to avoid continuous infusion.

Despite the advantages of CapeOX therapy, guidelines for the management of patients with mCRC published by the European Society for Medical Oncology (ESMO) discourage the use of therapies combining capecitabine with an EGFR antibody [11]. These guidelines were based on evidence showing that treatment with cetuximab + CapeOX has no beneficial effects in these patients [12]. In contrast, a phase II clinical trial we conducted found that combining cetuximab with the oxaliplatin-based FOLFOX or CapeOX treatments yielded positive response rates (RR) of 64.9% (24/37 patients) and 72.0% (18/25 patients), respectively, in patients with KRAS and BRAF wild-type mCRCs [13]. Our subsequent phase II trial focusing on a combined CapeOX plus cetuximab treatment in patients with KRAS exon 2 codon12/13 wild-type mCRC had only a 50% RR (95% CI, 33.8-66.2%), even though the safety profile was acceptable [14].

It is possible that the efficacy of combined CapeOX plus cetuximab treatment as a first-line therapy for mCRCs may indeed be inferior, as suggested by a large phase III clinical trial [12]. However, we believe that the low response rate in our second phase II trial [14] may be due to the coincideental recruitment of patients with mCRC harboring mutations that we had not identified. Thus, in the present study, we extended the mutation status of mCRCs to include RAS, BRAF, and PIK3CA mutations. Using this new information, we re-analyzed the clinical efficacy data for CapeOX plus cetuximab treatment from our previous phase II clinical trials.

Gene mutation status was evaluated using the tissue samples obtained when patients were recruited. Extra tissue samples were not collected and additional biopsies were not performed for the current study. DNA was extracted from formalin-fixed, paraffin-embedded tumor tissues [16]. KRAS mutations in codons 12, 13, and 61 [14], and BRAF and PIK3CA mutations were detected by direct sequencing as previously described [17-19]. Extended RAS (KRAS and NRAS) mutations were evaluated using the RASKET KIT [20]. Additionally, microsatellite instability (MSI) was analyzed by using the MSI Analysis System, Version 1.2 according to the manufacturer's instructions (Promega, Madison, WI).

Flow diagram depicting the selection of patients with expanded RAS/BRAF/PIK3CA wild-type mCRCs and patients with mCRCs with any mutation. A total of 139 patients were recruited at interim registration for the FLEET study. Of these, 69 patients with KRAS exon 2 codons 12/13, and exon 3 codon 61 mutations and the BRAF V600E mutation were excluded. Of the remaining 70 patients, 62 participated in the FLEET study. Clinical course data were available for this study. A total of 40 patients with KRAS exon 2 codons 12/13 wild-type mCRC were registered in the FLEET2 study. Relevant clinical data were also available for this study. The mutation status of RAS/BRAF/PIK3CA was analyzed in 102 eligible patients recruited for the FLEET and FLEET2 studies. The numbers next to the gene mutation refer to the number of patients with that particular mutation. It should be noted that one patient had both A146T and H1047R mutations, and another patient had D594G and H1047R mutations, simultaneously. Consequently, 88 patients with extended RAS wild-type, BRAF wild-type, and PIK3CA wild-type mCRCs were identified. 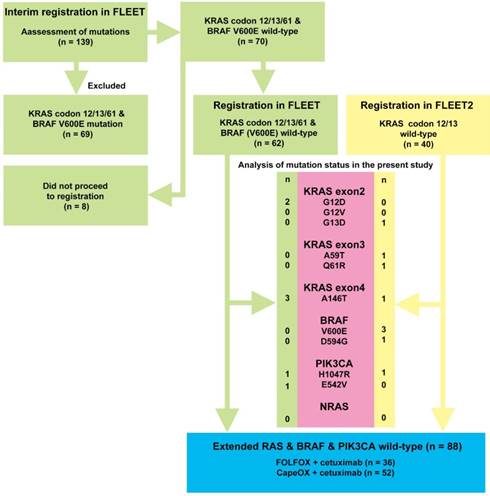 Unless indicated otherwise, data show the number of patients in each group, with percentages in parentheses. Other metastatic sites include the peritoneum, bone, and local recurrences within the pelvic cavity.

Maximum changes of tumor diameters from baseline. Tumor shrinkage was significantly larger in patients with RAS/BRAF/PIK3CA wild-type mCRCs (blue and green bars) than in patients with any mutation (red bars). Patients treated with FOLFOX + cetuximab appeared more frequently on the left-hand side of this plot suggesting an excellent response to the treatment. Patients treated with CapeOX and cetuximab mainly occupied the middle part of this plot. Patients with any mutation mainly accumulated on the right-hand side of the plot. Despite this, two patients with mutant-type mCRCs still had quite a good response toward combination therapy. 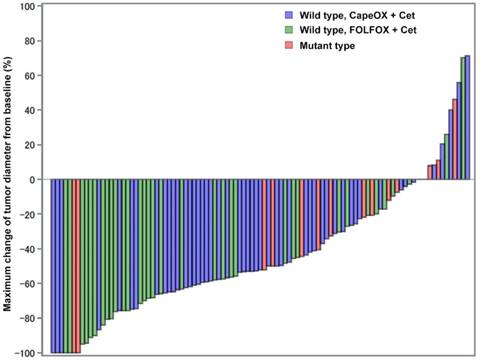 Data are provided as the number of patients in each group or as median values with 95% confidence intervals in parentheses.

Pharmacokinetic studies provide further support for combined CapeOX plus cetuximab treatment. Rachar and colleagues demonstrated that the plasma concentrations of capecitabine and its metabolites were not affected even when it was administered with cetuximab [22]. It is also unlikely that co-administration of oxaliplatin, capecitabine, and cetuximab alters the plasma concentration of any of these three agents because no metabolic interactions between these agents have been described [23]. Taken together with our current findings, these pharmacokinetic data plus our concerns about the COIN study, and the lack of other relevant studies demonstrating inferiority of CapeOX plus cetuximab compared to FOLFOX plus cetuximab lead us to suggest that CapeOX plus cetuximab is a potential candidate for use as an active first-line treatment for patients with extended RAS/BRAF/PIK3CA wild-type mCRC. The convenience of this regimen, which has the advantage of not needing infusion catheter placement, further strengthens our claim.

The second message is that the maximum tumor shrinkage observed in patients treated with CapeOX plus cetuximab was smaller than that observed in patients treated with FOLFOX plus cetuximab. In the past, surgical intervention for unresectable hepatic metastasis was an uncommon clinical practice. However, the emergence of bevacizumab and cetuximab in addition to cytotoxic doublets improved conversion rates, and eventually improved overall survival rates [24, 25]. These results suggest that optimal chemotherapy regimens should be provided as first-line treatments, during which time the tumor size must be frequently assessed to gauge whether it is ready for resection [11]. In this context, our results may suggest that CapeOX plus cetuximab treatment is not a suitable strategy for patients with liver-limited unresectable metastases in which significant tumor shrinkage might allow curative resection. However, we should note that several patients receiving CapeOX plus cetuximab still showed significant tumor shrinkage, as shown in Figure 2. Further studies are required to examine whether the differences in tumor shrinkage observed in the present study result in altered conversion rates.

High levels of microsatellite instability (MSI-H) are found in approximately 5% of patients with colorectal cancer. MSI-H are associated with poor prognosis, which may be attributable to co-existing BRAF mutations [27]. In the present study, three out of four patients with MSI-H did not have a BRAF mutation. Two of these three patients had a lukewarm response (stable disease) to treatment, with a maximum tumor size change of -20% and -30.1%, respectively. These results may suggest that MSI-H is a predictor of poor response to treatment regardless of BRAF mutation status. However, this is purely speculative due to the small number of patients.

The limitations of the present study include the small number of patients, the lack of information concerning the original tumor site (left-right), missing information regarding the interval between curative resection of primary tumors to detection of recurrence, and/or the lack of clinical information on patients with BRAF mutation mCRC recruited in the FLEET study. These factors may potentially influence the clinical course of the treatment [28, 29], and alter the interpretation of the results. Especially, a retrospective study focusing on the location of the primary tumor revealed that patients who had a left-sided tumor had a better prognosis than those who had a right-sided tumor, showing a clear clinical benefit of cetuximab treatment in patients with left-sided tumors [30]. However, few studies have addressed this idea, and further research is needed. An analysis using data from the 153 patients treated with cetuximab-containing chemotherapy for metastatic colorectal cancer did not show a clear difference in PFS between right- and left-sided tumors [31]. The authors noted that effects of tumor location on clinical outcomes might have been masked in this analysis for two reasons: lack of information regarding oncogene mutations and/or epigenetic alteration, and the inclusion of different lines of treatments. Therefore, including sidedness of the primary tumor as a variable in the present study would have provided further insight into the relationships between cetuximab efficacy, gene mutations, and primary tumor sidedness.

This study was supported by the non-profit organization Epidemiological and Clinical Research Organization (ECRIN). This work was achieved thanks to all of the patients and investigators involved.

3. Bokemeyer C, Bondarenko I, Makhson A. et al. Fluorouracil, leucovorin, and oxaliplatin with and without cetuximab in the first-line treatment of metastatic colorectal cancer. J Clin Oncol. 2009;27:663-71

21. Adams RA, Meade AM, Madi A. et al. Toxicity associated with combination oxaliplatin plus fluoropyrimidine with or without cetuximab in the MRC COIN trial experience. Br J Cancer. 2009;100:251-8