Down-Regulated microRNA-34a Expression as a Prognostic Marker for Poor Osteosarcoma in Mice: A Systematic Review and Meta-Analysis

Background: In children and adolescents, osteosarcomais the most common malignant bone tumor with a high mortality rate. New therapeutic strategies are urgent to be explored. Studies have proven that microRNAs (miRNAs) in malignant tumors often appear dysregulation, this provides a direction for exploring the new therapeutic strategies for cancers. The aim of this meta-analysis is to summarize and analyze whethermicroRNA-34a(miRNA-34a) could be a prognostic marker for osteosarcoma in mice.

Methods: We searched PubMed, Web of Science, Embase, Wan Fang Database, China Knowledge Resource Integrated Database, VIP Database, and SinoMed since their initiation date to January 24, 2018. After screening based on inclusion and exclusion criteria, eight articles were included for the final analysis.

Results: Our results showed that tumor volume and tumor weight were inhibited by restoring the down-regulated expression of miRNA-34a in the xenograft mouse models.

Conclusions: Down-regulated miRNA-34a expression is a prognostic marker for poor osteosarcoma. We should be more committed to investigate the clinical significance of miRNA-34a in osteosarcoma patients.

Osteosarcoma is the most common primary bone cancer arising from metaphysis of the long bones, which mainly comes from young people and adolescents, accounting for about five percent of pediatric cancers. Despite the fact that there are aggressive tumor resection, combinatorial chemotherapy and radiotherapy treatments, the five-year survival rate of osteosarcoma patient without metastasis is only about sixty percent to seventy percent [1, 2]. The survival rate of patients with metastasis or relapse is still below 20%[3].Therefore, it is essential to develop new therapeutic approaches for osteosarcoma treatment.

MicroRNAs (miRNAs) are a class of non-coding RNAs, including 19 to 25 nucleotides, and regulate the translation and degradation of mRNAs through imperfect base pairing with 3′-untranslated region (3′-UTR) of the target mRNAs at post-transcriptional level[4, 5]. MiRNAs play important role in cellular physiologic processes, such as proliferation, differentiation, apoptosis, thus can act as oncogenesis or tumor suppressor genes in different tumors[6]. There are three members in microRNA-34 (miRNA-34) family (miRNA-34a, miRNA-34b and miRNA-34c). They are part of the p53 network and whose expression is directly induced by p53 in response to DNA damage or oncogenic stress. In the recent years, some studies indicate that miRNA-34a may act as a tumor suppressor by regulating apoptosis in several tumors[7, 8].

The purpose of this study is to evaluate the potential function of miRNA-34a as an independent prognostic marker for osteosarcoma based on the published literatures, and to investigate the methodological quality of the existing studies, thus to guide the preclinical experimental design and the future clinical trials.

Two reviewers (W.Y.W and S.P.H) independently searched literatures out of PubMed, Web of Science, Embase, Wan Fang Database, China Knowledge Resource Integrated Database, VIP Database, and SinoMed since their initiation date to January 24, 2018, without restrictions of the languages, publication status or publication dates. Based on the issue to be resolved, the following key words were used: (miRNA-34a OR microRNA-34a) AND (Osteosarcoma).

According to the inclusion and exclusion criteria, two reviewers (J.L.C and H.F.R independently screened the literatures by reviewing the titles, abstract and full texts. Disagreements were determined by a third author (Y.P.Y.). Only literatures conformed to the standard were included in this meta-analysis.

Studies that estimate the therapeutic effects on osteosarcoma in mouse models by restoring the abnormally expressed miRNA-34a were searched. Records only having in vitro experimental data and the clinical cases were excluded.

Any intervention methods to restore the altered miRNA-34a expression in mouse osteosarcoma models were collected.

The formula of tumor volume calculation [9]:

Tumors were removed and weighed when mice were sacrificed at the end of experiments.

We conducted pair-wise meta-analysis for studies, which directly compared the influence on tumor growth between restored miRNA-34a expression and the control (abnormally expressed miRNA-34a) to determine the pooled relative effect of each intervention for the measurement outcomes (tumor volume and tumor weight), and the mean difference (MD) of the post-intervention value was determined.

In this meta-analysis, tumor volume and tumor weight were compared respectively. Meta-analysis was performed using Review Manager Software version 5.3 (software update; The Nordic Cochrane Centre, Copenhagen, Denmark). I2 and p value were calculated to evaluate the heterogeneity. Heterogeneity was existed if p value<0.10 by the chi-square (x2) test. The results indicated a high level of heterogeneity when I2 >50%, the data from studies should be pooled using the random-effects model. When I2<50%, data from studies should be pooled using the fixed-effects model. When same outcomes were measured using different instruments across studies, we used a standardized mean difference (SMD) in the meta-analysis to combine continuous data.

As shown in figure 1, the process of document retrieval is as follows. Firstly, we identified88 articles in the databases using the search strategy described in the section of the method, and excluded 24 duplicates from the initial articles. Twenty-four articles were further excluded after screening the titles, abstracts, publication types. Then, according to reading the full texts, 32 articles were excluded. Finally, eight articles were included in our final analysis, seven of the articles were reported in English, and one of them was reported in Chinese [10-17].

The flow diagram of the literature identification and selection process. 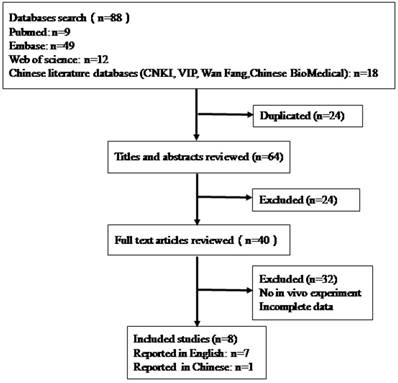 Quality evaluations of the included studies

All the eight included literatures reported that miRNA-34a was the tumor suppressor, however, different outcome measures (tumor volume or tumor weight) and different osteosarcoma cell lines (MG-63, Saos-2, 143B, SOSP-9607)and different inoculation sites to produce xenograft models (intratibial inoculation or subcutaneous inoculation) were reported. Therefore, a high heterogeneity could be produced. To minimize the heterogeneity, stratifications were performed based on these factors. Meanwhile, random-effects models or fixed-effects models were used for the analysis.

There were eight studies that used tumor volume as the major outcome measure in this meta-analysis, and all of them reported that miRNA-34a functioned as tumor suppressor [10-17].Therefore, all the data from these eight studies were extracted and pooled for analysis. There are 53 mice in the experimental group and 71 mice in the control group. The result of the forest plot using the random-effects model showed that the tumor volume in osteosarcoma xenograft was decreased after up-regulation of miRNA-34a expression, thus recovery of miRNA-34a expression to the normal level could inhibit osteosarcoma growth in vivo. The pooled MD = [-2.93]; confidence interval [CI]: [-4.15, -1.70]; P<0.00001 (Figure 2).

In these eight studies, three of them applied osteosarcoma xenograft models produced by subcutaneous inoculation of osteosarcoma cells[13, 14, 16].There were 23 mice in the experimental group and 41 mice in the control group. The result of the forest plot using the random-effects model suggested that tumor volume was significantly decreased by up-regulation of miRNA-34aexpression.The pooled MD = [-3.18]; 95% confidence interval [CI]: [-5.61, -0.75]; p =0.01(Figure 3, upper part).

The characteristics of studies included in this meta-analysis.

Quality evaluation of the included literatures.

Osteosarcoma xenograft models induced by intratibial injection of osteosarcoma cells were used in other five studies[10-12, 15, 17]. There were 30 mice in the experimental group and 30 mice in the control group. A random-effects model was used also due to the high heterogeneity among the included studies, and the tumor volume was significantly decreased after the decreased tumor suppressor miRNA-34a was restored (pooled MD = [-2.74]; 95% confidence interval [CI]: [-4.07, -1.41]; p<0.0001; Figure 3 lower part).

From the comparison in the figure 3, the overall effects on inhibiting tumor volume by upregulation of miRNA-34a expression was better when the osteosarcoma xenograft models were produced by subcutaneous injection than by intratibial injection.

Among all eight studies that used tumor volume as the major outcome measure in this meta-analysis. Two studies used MG-63 to produce osteosarcoma xenograft models[14, 16]. There were 12 mice in the experimental group and 24 mice in the control group. The pooled MD = [-3.68]; 95% confidence interval [CI]: [-7.60, 0.25]; p =0.07 (Figure 4, part 1).The result demonstrated that up-regulation of miRNA-34a expression could not inhibit the tumor volume produced by MG-63. 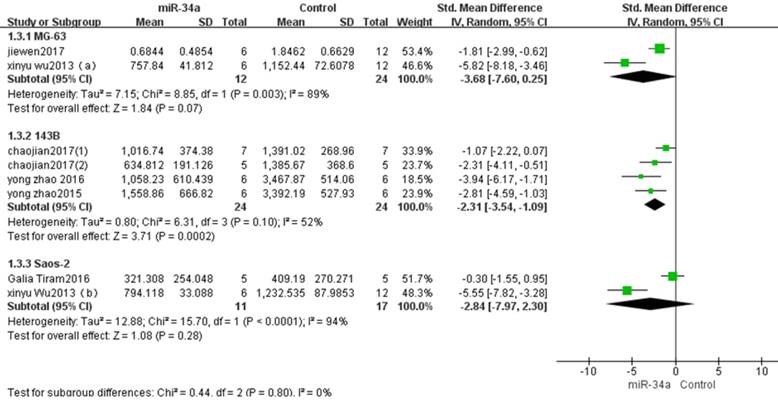 Osteosarcoma xenograft models induced by intratibial injection of osteosarcoma cells were used in three studies [10, 11, 15]. There were 19 mice in the experimental group and 19 mice in the control group. A fixed-effects model was used also due to the low heterogeneity among the included studies, and the tumor weight was significantly decreased after the decreased miRNA-34a was restored. (pooled MD = [-2.52]; 95% confidence interval [CI]: [-3.46, -1.58]; p <0.00001; Figure 6).

Only 1 study used SOSP-9607 cell line to produce osteosarcoma xenograft models, therefore the data could not be pooled for reanalysis. This study confirmed that miR-34a inhibits the development of osteosarcoma in vitro and in vivo”.

The results of our present meta-analysis demonstrated that tumor volume and tumor weight in the xenograft mouse models were significantly decreased by upregulation of miRNA-34a expression. The overexpression of miRNA-34a inhibited osteosarcoma cell growth both in vitro and in vivo. Therefore, we confirmed that miRNA-34a could act as a tumor suppressor in osteosarcoma.

Osteosarcoma, as the most common primary malignant bone tumor, has high mortality rate and metastasis rate. With the progress of neoadjuvant chemotherapy, the 5-year survival rate in patients without metastasis is less than 70 percent[18], while the survival rate of patients with metastasis or relapse is still lower than 20%[3]. Therefore, it is essential to develop new therapeutic strategies for osteosarcoma.

In recent years, miRNA is a hot topic in the field of osteosarcoma research. Many literatures suggest that miRNAs play important roles in cell proliferation, apoptosis and differentiation. MiRNA-34a was reported low expression in human cancer cells. Cell proliferation was inhibited, cell cycle progression was arrested and cell apoptosis was induced by restoring of the down-regulated miR-34a expression [19, 20]. MiRNA-34a is proven to be the mediator of tumor suppression via transcriptional regulating p53 and NOTCH, as well as epithelial-mesenchymal transition (EMT) and TGF-β signaling pathways[21].These results indicate that miRNAs-34a may be a therapeutic target for osteosarcoma.

It would be surprising if many studies were performed by different researchers in different laboratories with different techniques, all of them ended up by measuring the same fundamental parameters. Furthermore, animal studies are usually small size (with a sample size of about ten in each group). Therefore, the heterogeneity is acceptable, the challenge is to decide on the most fitting method to evaluate heterogeneous studies. When heterogeneity cannot be ignored, one analytical method is to integrate the data into a random-effects model, which hypothesizes that the effects being estimated in diverse studies are not equal, however follow some distribution.

Therefore, we systematically collected all available literatures of miRNA-34a on osteosarcoma in the mouse models and performed a meta-analysis. This is the first meta-analysis to evaluate the potential value of miRNA-34a serving as diagnostic and prognostic bio-marker for osteosarcoma. We carried out a systematic literature search that included both English and Chinese databases to make sure the comprehensiveness of the studies that were assessed. Two researchers reviewed the studies individually, evaluated the methodological quality, and extracted the data to evade the bias. Though this is not a comprehensive list of all therapies that have ever been tried in pre-clinical models of osteosarcoma, but rather, a systematic review and meta-analysis of specific therapy that are being considered for human translation.

Although all included publications and data were collected strictly based on the inclusion/ exclusion criteria in this meta-analysis to reduce the bias and improve the quality of the article, some inevitable factors still existed. As we can see Tables 1 and 2, one studies did not explain gender of mice, no study has described sample-size calculation, allocation concealment, blinded assessment of outcomes and animals excluded from analysis.

In conclusion, an important finding in this meta-analysis is that miRNA-34ahas good anti-osteosarcoma potential thus may have future value as a therapeutic and prognostic biomarker in osteosarcoma. This will provide a powerful evidence for the future development of animal experiments and new therapeutic targets for clinical treatment of osteosarcoma. However, more reliable animal experiments and clinical trials need to be carried out before a miRNA-based treatment could be translated from animal studies to human use.