Methods: The subjects of this study were patients diagnosed as synchronous Krukenberg tumors of gastric origin in the period between December 2004 and December 2015. Patients were classified in accordance with treatment modality: metastasectomy group (metastasectomy combined with chemotherapy) and non-metastasectomy group (chemotherapy alone). Clinicopathological characteristics together with treatment records were investigated in detail and their relationship with survival outcomes was examined.

Gastric cancer ranks as the fifth most common cancer and the third most common cause of cancer death worldwide [1]. Metastasis and high recurrence rate are the main reasons for poor prognosis of patients with gastric cancer. Krukenburg tumor is a metastatic tumor of the ovary that primarily arises from gastrointestinal tract [2]. It is reported that the incidence is approximately 0.3% to 6.7%. However, incidence rates up to 33%-41% have been reported by autopsy studies [3,4]. Ovarian metastasis is correlated with worse prognosis; additionally, it is a main cause of treatment failure in patients with advanced gastric cancer [5]. Systemic chemotherapy provides symptom-relief and improves survival of patients with ovarian metastasis; however, treatment efficacy and overall survival are still unsatisfactory [2,6]. Some researchers have investigated the benefit of metastasectomy for synchronous Krukenberg tumors of gastric origin [7,8]. Nevertheless, there is no clear consensus on the benefit of ovarian metastasectomy, although it may be beneficial in a subset of patients [9]. A well-defined treatment strategy for synchronous Krukenberg tumors of gastric origin is yet to be established. In our series, we explored the association between metastasectomy of Krukenberg tumors, clinicopathological features, and overall survival in order to delineate a reasonable treatment strategy for these patients.

We retrospectively reviewed the clinical data pertaining to gastric cancer patients with synchronous ovarian metastasis who underwent metastasectomy or received systemic chemotherapy as the initial treatment at the Zhejiang Cancer Hospital (Hangzhou, China) between December 2004 and December 2015.

All patients underwent imaging examinations to evaluate the extent of disease and resectability. The decision to perform metastasectomy was based on consensual opinion after comprehensive assessment of patient by a multidisciplinary team. Postoperative residual disease state in individual patients was categorized as gross residual disease (R2), positive margin of resection (R1), or complete resection with negative margins (R0). Postoperative complications were defined prospectively as any deviation from a pre-determined post-operative course within 30 days of surgery and classified according to the Clavien-Dindo severity classification (CDSC)[10]. Adverse events were evaluated using the Common Terminology Criteria for Adverse Events, version 3.0 (CTCAE, Ver. 3.0).

Patients underwent routine follow-up evaluation once every 3 months for the first 3 years, followed by once every 6 months during 3 to 5 years. Overall survival (OS) was defined as the time interval from the date of pathological diagnosis of gastric cancer to the date of death or most recent follow-up. The cutoff date for OS was December 31, 2017.

From December 2004 to December 2015, a total of 4923 female patients with gastric cancer were treated at the Zhejiang Cancer Hospital in Hangzhou, China. Of these, 272 patients had synchronous ovarian metastasis. 169 patients were excluded because they had extensive peritoneal dissemination and/or other distant metastasis.

Clinicopathological characteristics and features of synchronous ovarian metastasis from gastric cancer were enumerated in Table 1. The two groups were comparable with respect to tumor location, differentiation, ascites, tumor marker levels, TNM stage and expressions of ER and PR.

Kaplan-Meier analysis of overall survival based on treatment for gastric cancer patients with synchronous Krukenberg tumors. 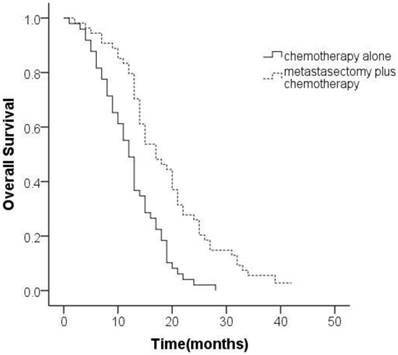 Univariate and multivariate analysis of prognostic factors for OS

Kaplan-Meier analysis of overall survival based on curative resection of synchronous Krukenberg tumors from gastric cancer. 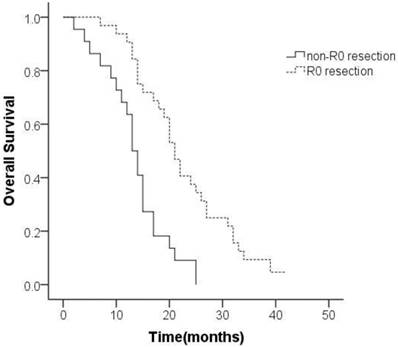 Representative images of negative (A) and positive (B) ER-β expression. 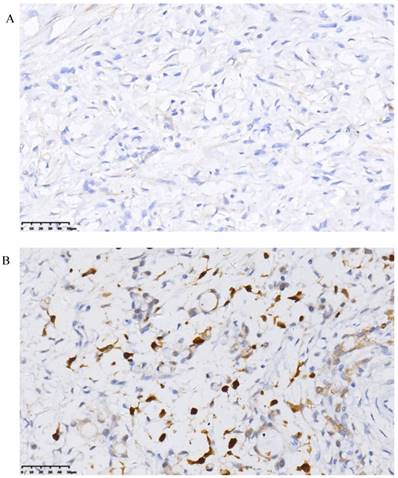 Association between expression of sex hormone receptors (SHR) and survival

Representative images of negative (A) and positive (B) PR expression. 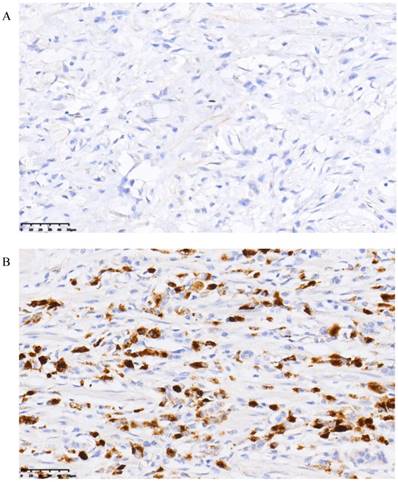 Paclitaxel, S-1 and oxaliplatin were the most commonly used chemotherapeutic agents in this study population. Median duration of chemotherapy in the metastasectomy group (3.4 cycles, range 1-6 cycles) was shorter than that in the non-metastasectomy group (4.5 cycles, range 3-8 cycles); however, there was no statistical difference (P>0.05). Treatment-related adverse events and grade 3 or 4 toxicity occurred in 66.0% (68/103) and 35.9% (37/103) of patients, respectively. Among hematological toxicity of grade 3 or 4, leucopenia/neutropenia was the most frequent (24.3%) followed by thrombocytopenia (7.8%).The most common non-hematological toxicities were elevated levels of serum aspartate aminotransferase (3.9%), elevated serum bilirubin concentrations (1.9%) and rash (1.9%).

Survival curves of patients with expression status of ER-β. 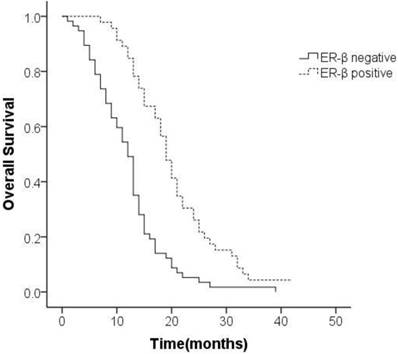 Survival curves of patients with expression status of PR. 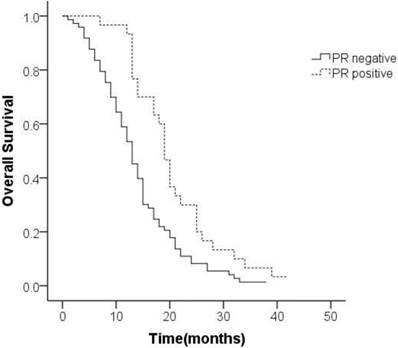 A total of 9 (16.7%) patients developed postoperative complications: anastomotic leakage (n=3), pneumonia (n=2), abdominal abscess (n=2), delayed gastric emptying (n=2), and hemorrhage (n=1). In a vast majority of these patients, the complications were successfully resolved with conservative treatment; nevertheless, reoperation was performed in one patient due to intraperitoneal hemorrhage.

The prognosis of ovarian metastasis originated from gastric carcinoma has been disclosed to be worse than that from other primary gastrointestinal tumors [11,12]. Although chemotherapy is one of the main therapeutic modalities for advanced gastric cancer with ovarian metastases, the curative effect has been unsatisfactory (reported median survival: 7-11 months) [13]. There have been very few reports with respect to surgical treatment. Some recent retrospective studies indicate that metastasectomy of Krukenberg tumors may positively influence the prognosis of these patients [7-9]. Nevertheless, a reasonable therapeutic strategy for Krukenberg tumors that originate from gastric cancer is yet to be established.

A retrospective study from Lu et al. analyzed 85 participants diagnosed as advanced gastric carcinoma with ovarian metastases since 2000 to 2010.The results showed that the median survival in the resection group was 14.1 months as against 8 months in the non-resection group [7]. Another study in Korea reported superior OS of patients treated with metastasectomy plus chemotherapy as compared to that of patients who received chemotherapy alone (18.0 months vs. 8.0 months for patients with synchronous Krukenberg tumors). Nonetheless, the significance of the findings may be affected by the disproportion of the two groups [8].

In our series, outcomes of 103 gastric cancer patients with synchronous ovarian metastasis were retrospectively analyzed. Patients who underwent metastasetomy experienced significantly better OS as compared to their counterparts in the non-metastasetomy group. In both groups, the sample size was relatively large and the clinicopathological characteristics were comparable. Consistent with the results of previous studies, we conclude that metastasectomy should be the recommended strategy for gastric cancer patients with synchronous ovarian metastasis.

Evaluation of prognostic factors may help identify patients who could benefit from treatment. Independent risk factors for OS included metastasectomy, presence of signet ring cells, peritoneal carcinoma, and expressions of ER-β and PR. Krukenberg tumors are often accompanied by variable degrees of peritoneal metastasis, which could result in ascites, intestinal obstruction, and cachexia, so as to adversely affect the quality of life of these patients [14]. Currently, there is no clear consensus on the optimal treatment strategy for gastric cancer with ovarian metastasis, particularly for patients with peritoneal metastases. Nonetheless, cytoreductive surgery plus chemotherapy may confer a survival benefit for these patients [15,16]. In our series, local peritoneal lesions were resected with ovariectomy and then followed by systemic chemotherapy. Further analysis displayed that the prognosis of patients with non-R0 resection was markedly worse than that of patients with R0 resection. Consequently, improved outcomes of Krukenberg tumors can be achieved with surgical resection without massive residual lesions. As one of the major therapeutics, chemotherapy could enhance living quality and prolong OS [17]. Combination or single agent chemotherapy (taxanes, platinum, fluoropyrimidine, and epirubicin) was shown to be effective for Krukenberg tumors with concomitant peritoneal dissemination [18,19]. A European study demonstrated the efficacy of hyperthermic intraperitoneal chemotherapy (HIPEC) in these patients [5]; we are also conducting a related clinical study (NCT02549911), and these need to be validated in the future.

The present study had several limitations. First, it was a retrospective, single center study. Further, the effect of some inherent selection bias on our analyses cannot be ruled out. Nevertheless, the relatively large sample size is a strength of our study. Moreover, this is the first study that evaluates the prognostic relevance of SHR in patients with synchronous Krukenberg tumors of gastric origin. Our findings may help facilitate the formulation of reasonable treatment strategies for these patients.

In our series, metastasectomy combined with appropriate chemotherapy was correlated with prolonged survival time for patients with synchronous Krukenberg tumors of gastric origin. Metastasectomy, presence of signet ring cells, peritoneal carcinomatosis, and expressions of ER-β and PR were identified as prognostic factors for survival. Further studies are required to validate our conclusions, and establish reasonable treatment strategies for these patients.

This study was supported by the Natural Science Foundation of Zhejiang Province of China (LY18H160032 to Pengfei Yu).

13. Kiyokawa T, Young RH, Scully RE. Krukenberg tumors of the ovary: a clinicopathologic analysis of 120 cases with emphasis on their variable pathologic manifestations. Am J Surg Pathol. 2006;30(3):277-99