Esophageal cancer is one of the most aggressive cancers worldwide with a high death rate and is ranked as one of the top five deadliest malignancies in China [1-3]. Its two subtypes; esophageal squamous cell carcinoma (ESCC) and esophageal adreno-carcinoma (EAC) have distinct pathological and aetiological characters. Of all esophageal cancer cases, more than 90% of patients in China suffer from ESCC [4]. Despite the improvement in diagnostic techniques as well as advancement in therapeutics, it is usually diagnosed at a late stage. Late diagnosis and aggressiveness of the disease have made it lethal and the overall five-year survival rate is around 15%-25% [5,6]. Early diagnosis and effective therapeutic modalities are the critical issues, and thus can help to reduce the mortality rate. Identification of novel biological markers can play an important role in achieving this goal. It is therefore necessary to understand the disease pathogenesis and all molecular changes which occur. Lack of specificity and sensitivity are the problems associated with already identified biological markers. Therefore, the identification of new biological markers which can be used for early diagnosis and prognosis of esophageal cancer is urgently required.

Non-coding RNAs were identified for the first time in 2002. A large spectrum of RNAs is produced as a result of transcription including protein-coding RNAs and non-protein coding RNAs. Research evidence has showed that non-coding RNAs are important biological regulators which affect the phenotype of the cell from normal to cancerous [7-9]. A new class of non-coding RNAs has been identified as long non-coding RNAs (lncRNAs). These RNA molecules are longer than 200 nucleotides with limited or no protein-coding potential but play important roles in different biological pathways and processes like growth, differentiation, proliferation etc. [10-12]. Research evidence indicates that variation in expression level of lncRNAs takes place due to stimuli while the role of lncRNAs as a scaffold at DNA level is also documented showing that they cause modification in chromatin and regulates transcription and translation processes. They regulate the expression of many genes and their epigenetic role is documented in different studies [13-15]. Dysregulated expression of lncRNAs is linked with many human diseases and cancers, including esophageal cancer. They play an important role in modulation of tumor-suppression as well as oncogenic pathways. Most of the lncRNAs have shown tissue-specific and cancer-specific expression [13,16,17]. This advancement has opened a new research direction for researchers to investigate their role in different diseases, especially in cancer. H19 was the first lncRNA identified and described as a tumor suppressor gene and its role has been investigated in different cancers such as breast cancer, lung cancer, cervical cancer, esophageal cancer and bladder cancer [18,19]. CCAT2, POU3F3, SPRY4-IT1, and HOTAIR are few important potential biomarkers which have been studied and have shown prognostic value for ESCC [20-23]. Previous research regarding the functions of lncRNAs in different cancers have proved that lncRNAs are important regulators of cancer initiation and progression by affecting cell proliferation, cell cycle regulation, migration, and invasion [24-26].

One of the previous studies investigated the expression profile of LINC01234 along with two other lncRNAs and identified the three-lncRNA signature as a prognostic marker for ESCC patients. This study found a significant difference in expression, in esophageal squamous cell carcinoma (ESCC) tissues and normal esophageal epithelial tissues [27]. Differential expression of LINC01234 has also been reported in lung cancer tissues and normal lung tissues as well as in head and neck cancerous and normal tissues [28]. There is no research about the role of LINC01234 in cancer cell progression therefore, there is need to explore the role of this lncRNA in different biological processes.

The human esophageal cancer cell lines KYSE-450, EC-109, CEC2, EC-9706, and KYSE-180 were obtained from Chinese Center for Disease Control and Prevention along with immortalized cell line HaCaT. These cell lines were maintained in DMEM (Hyclone, Thermo Scientific) supplemented with 10% FBS (Gibco, Life Technologies), 100 units/ml penicillin and 100 mg/ml streptomycin. All the cell lines were maintained in humidified and sterile atmosphere of an incubator at 37 °C with CO2 (5%).

Embryonic esophageal epithelial cells of human were transformed into malignant cells in our laboratory with the help of HPV18-E6/E7- Adeno-associated virus (AAV). In the first step, epithelial cells were infected with HPV18 E6E7 then tumor-promoting factor TPA was added as the second step [29]. After 76 passages, the transformation of normal esophageal cells into cancer cells was observed. Elevated expression of LINC01234 was detected in Affymetrix cDNA Chip result of these epithelial cells provided evidence that it may play some important role in causing esophageal cancer [30].

Total RNA was extracted from Cell lines and DNA was removed according to manufacturer's instructions, by using Trizol (Invitrogen, Life Technologies) and DNase kit (Promega) respectively. cDNA from RNA was synthesized by using Reverse Transcription kit (Promega according to manufacturer's protocol. Applied Biosystems ViiA™ 7 (Life Technologies) was used for amplification of cDNA by quantitative real-time PCR (qRT-PCR) with SYBR Select Master Mix (Life Technologies). 2ul cDNA was used with a total reaction volume of 8ul (per well) for qRT-PCR in 384 well block plate. For qRT-PCR, two sets of primers were designed by Beacon Designer 7 Software and which are given in supplementary material as Table S1. For the relative expression levels of LINC01234, GAPDH was used as an endogenous control while HaCaT was used as reference sample. Each sample was used in triplicates for qRT-PCR. The following reactions conditions were used for amplification: denaturation at 95 °C (10 min), followed by 40 PCR cycles at 95 °C (15s) and 60 °C (1 min).

To silence the lncRNA LINC01234, three small interfering RNAs (siRNAs) and one negative control (si-NC) were constructed (RiboBio, China). Cells were collected after trypsinization and 25×104 cells per well were seeded on six-well plates. After one day, cells were transfected with three siRNAs and the negative control. For this purpose, FuGENE HD Transfection Reagent (Promega) was used. After 48 hours of transfection, qRT-PCR was used to determine the interfering efficiency of siRNA, and the siRNAs showing maximum silencing efficacy were used for all experiments. Sequences of siRNAs are provided in supplementary material as Table S2.

To determine cell migration, esophageal cancer cells transfected with si-LINC01234 or si-NC were seeded into 6-well plates and allowed to grow to 90-95% confluence. Wounds were introduced into monolayer cells using a 200ul sterile pipette tip. Wounded monolayer cells were washed three times with PBS to remove cell debris and then cultured. The speed of wound closure was monitored and photographed at different time intervals.

Costar chambers with transwell insert (Corning Incorporated, USA) having 8 μm pore size were used for cell invasion assay. 100uL of diluted Matrigel (Corning) was used to coat the permeable support. After two hours, 5 × 105 / mL cells transfected with si-LINC01234 or si-NC were suspended in serum-free medium and 200 μl were seeded in the upper chamber coated with matrigel, while 750uL DMEM with FBS (20%) was added in the lower chamber. Then cell invasion chambers were placed in the incubator for 24 hours. After incubation, methanol was used to fix the invaded cells and crystal violet (0.1%) was used to stain the cells. Non-invading cells in the upper chamber were carefully removed with the help of wet cotton swabs. Then invaded cells were imaged and counted at three different fields under an inverted microscope.

Cells were transfected with si-LINC01234 or si-NC in 6-well plate. After 48 hours, cells were trypsinized and seeded on 96-well plates (2000/well). Cell counting kit8 (Dojindo) was used according to the manufacturer's protocol for the cell proliferation assay. The proliferated cells were quantified in triplicate at 450 nm after every 12 hours intervals.

For colony forming experiments, CEC2 cells at a density of 1000 cells/well were seeded onthe six-well plate after transfection with si-LINC01234 or si-NC, maintained in DMEM medium containing FBS (15%). The medium was changed after 3 days interval. After 12 days, methanol and crystal violet (0.1%) was used to fix and stain the colonies respectively. Visible colonies were counted manually after taking photographs.

After 48 h transfection, cells were trypsinized and harvested from six-well plates then collected after centrifugation. Cell pellets were washed with PBS (cold) and then cells were stained with FITC-Annexin V and propidium iodide (4A Biotech, China). Viable and dead cells, as well as early & late apoptotic cells were quantified and analyzed by FACS Calibur and Cell Quest Pro software (BD Bioscience, USA). The negative control group was used to compare relative ratios of the early and late apoptotic cells with knockdown LINC01234 CEC2 cells.

All biological experiments were performed in triplicate and data analysis was performed by using GraphPad Prism 7. Data are shown as mean ± SD. Statistical significance was assessed using the Student T-test. *p < 0.05 was defined to be the significant difference.

Gene Chip (Affymetrix) reported up-regulation of LINC01234 when normal esophageal cells were transformed into cancerous cells after 76 passages through HPV18 E6E7-AAV (Gene chip result is provided in supplementary material as Figure S1). This predicts that HPV may have some relationship with esophageal cancer and some role in up-regulation of LINC01234. This also provided the evidence that LINC01234 may have some regulatory role for causing esophageal cancer.

We down-regulated the expression of LINC01234 with the help of silencing its expression in CEC2 cell line, using three small interfering RNAs (siRNAs) and one scrambled siRNA (si-NC). At 48 h post-transfection, the efficiency of the siRNAs was checked by qRT-PCR using two primers for LINC01234. SiRNA-2 was observed to have the highest knockdown efficiency with both primers. Therefore, siRNA-2 was chosen for further experiments. LINC01234 expression was down-regulated by approximately 70% in CEC2 cells by si-2 when compared with the siNC (Figure 1B, P < 0.05).

We performed cell wound healing assay to investigate the role of LINC01234 in the regulation of cell migration in human esophageal cancer cells. The migration ability of cells was assessed after specific time intervals with treatment (si-LINC01234) and without treatwment (si-NC). Wound healing assays showed that the migratory rate of esophageal cancer cells transfected with si2-LINC01234 was significantly less compared with si-NC (Figure 2). 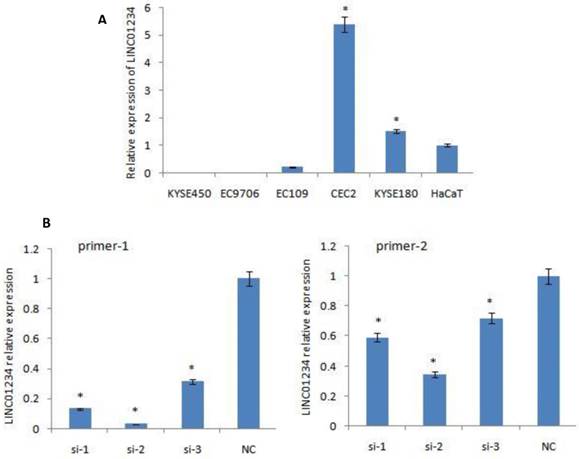 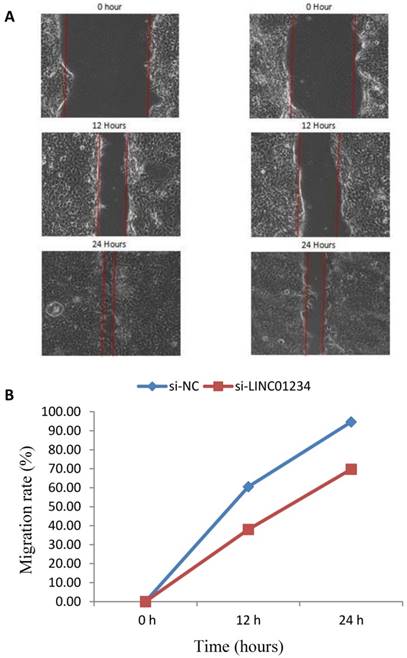 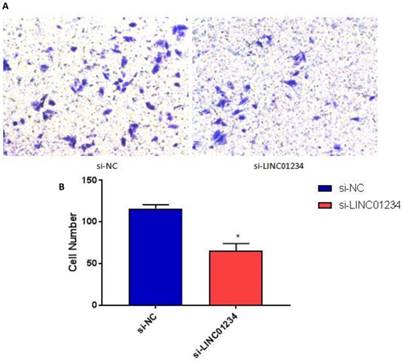 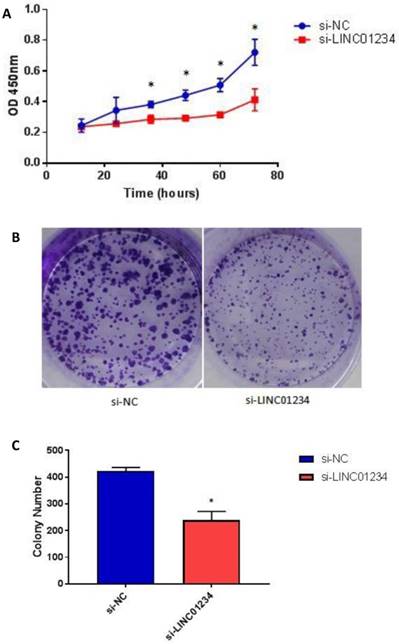 Effect of Knockdown of LINC01234 on Apoptosis

We investigated the role of lncRNA LINC01234 in apoptosis with the help of flow cytometric analysis. Apoptotic rate of CEC2 cells transfected with si-LINC01234 was elevated as compared to si-NC. We used to compare relative ratios of the early and late apoptotic cells. (Figure 5). 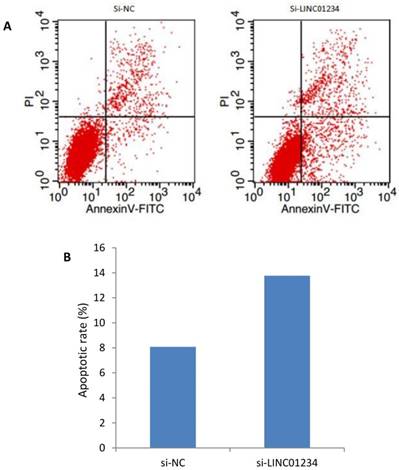 Esophageal cancer is one of the leading causes of death due to cancer, so it is important to find new molecular targets for its diagnosis, prognosis and treatment which can then play an important role for disease diagnosis, prognosis, and therapeutics. In the past decade, more and more data is providing strong evidence of the importance of non-protein coding regulatory RNAs along with protein-coding RNAs [15].

lncRNAs have gained attention in recent years due to evidence indicating their role in carcinogenesis in different studies. They are associated with disease progression and development by playing a role in migration, invasion, and proliferation. Abnormal expressions of lncRNAs have been studied in different cancers. Unfortunately, we have little knowledge about lncRNAs and their role in esophageal cancer because study regarding their functions in different cancers is still at its initial stage. Only a few lncRNAs have been studied in detail and most of them are still to be explored more in detail [10,12,31].

This study identifies that lncRNA LINC01234 has the potential of carcinogenesis in esophageal cancer that may act by cell proliferation, migration, invasion, and apoptosis. To the best of our knowledge, there is no article reporting the role of LINC01234 in cell proliferation, migration, and invasion for esophageal carcinoma. However, the downstream regulator involved in LINC01234-mediated cell migration and invasion of esophageal cancer cells still needs to be explored. Thus, much more work is still required to determine the detailed mechanisms of its functions in ESCC and the potentiality of LINC01234 as a therapeutic target for esophageal carcinoma.