Thyroid transcription factor-1 (TTF-1) is overexpressed in up to 95% of primary lung adenocarcinoma while negative for almost all squamous cell carcinomas. TTF-1 expression has been investigated as a prognostic factor in non-small-cell lung cancer (NSCLC) with conflicting results. We conducted this meta-analysis to gain a better insight into the prognostic role of TTF-1 in patients only with non-squamous (non-SQ) NSCLC. A systematic computerized search of the electronic databases including PubMed, PMC, EMBASE, Web of Science, and Cochrane Library was performed. From 21 studies, 6,451 patients were included in the combined analysis of hazard ratios (HRs) with 95% confidence intervals (CIs) for overall survival. Compared with patients with non-SQ NSCLC showing negative TTF-1 expression, those with tumors harboring TTF-1 overexpression had significantly better survival (HR = 0.49, 95% CI: 0.42-0.57, p < 0.00001). Subgroup analyses revealed that TTF-1 expression significantly correlated with a better prognosis in stage I (HR = 0.65, 95% CI: 0.50-0.84, p = 0.0008) as well as stage III-IV non-SQ NSCLC (HR = 0.38, 95% CI: 0.29-0.49, p < 0.00001). In conclusion, this meta-analysis demonstrates that TTF-1 overexpression is a favorable prognostic factor in patients with non-SQ NSCLC. The subgroup analyses indicate that TTF-1 is a good prognostic marker for survival not only in early-stage but also in advanced non-SQ NSCLC.

Lung cancer remains the leading cause of cancer-related death worldwide [1,2], despite recent advances in diagnostic and therapeutic techniques. For patients with advanced or metastatic non-small-cell lung cancer (NSCLC), systemic chemotherapy can provide a modest but significant improvement of survival [3]. Systemic treatment for NSCLC has dramatically progressed with the introduction of molecular targeted agents in the last 15 years. Recently immune checkpoint inhibitors have emerged as a promising option in the treatment of advanced NSCLC [4].

Several clinical and disease-related factors have been suggested as independent prognostic factors for survival in NSCLC: performance status (PS), age, sex, weight loss, stage, histologic subtypes, and gene expression profiles [5,6]. For most of these factors, however, the discriminant value is insufficient to guide the optimal therapeutic strategy for an individual.

Thyroid transcription factor-1 (TTF-1) is a master regulatory transcription factor for tissue specific genes [7]. TTF-1 is normally expressed in the thyroid, lung, and brain during embryogenesis and plays a physiologic role in their development. In the normal lung, TTF-1 plays a decisive role in the maintenance of the functions of terminal respiratory unit cells [8]. TTF-1 expression by immunohistochemistry (IHC) in primary lung cancers is dependent on the histological subtypes, as demonstrated by 70-80% of adenocarcinomas (ADCs) and 80-90% of small-cell carcinoma while negative for virtually all squamous cell carcinomas (SQCCs). TTF-1 is commonly used to distinguish primary lung ADC from tumors of other sources that have metastasized to the lung. However, its role in the lung carcinogenesis remains unclear. An animal study demonstrated that upregulation of TTF-1 correlated with favorable survival and downregulation was linked to loss of differentiation, enhanced tumor seeding ability, and increased metastatic potential [9].

Although the role of TTF-1 as a marker for ADC in the differential diagnosis of primary lung cancers has been well documented, its prognostic significance in patients with NSCLC has still been inconclusive [11-36]. While Puglisi et al. observed a detrimental effect of TTF-1 expression in resected NSCLC [11], the relationship between TTF-1 and survival was not found in other observational studies [12, 14, 16-19, 23, 27, 31, 32, 37]. However, others investigators reported that TTF-1 positivity was associated with a better prognosis [13, 15, 20-22, 25, 26, 28-30, 33-36, 38]. These discrepant results indicate that the prognostic significance of TTF-1 in NSCLC remains controversial.

The previous meta-analyses reported that TTF-1 expression correlated with a better survival in NSCLC [39,40]. Although TTF-1 IHC staining is negative for almost all SQCCs, however, they included patients with this histological subtype of NSCLC in the analysis. Therefore, their results could not reflect exactly the prognostic significance of TTF-1 in non-squamous (non-SQ) NSCLC. We performed this updated meta-analysis to gain a better insight into the prognostic role of TTF-1 expression in patients only with non-SQ NSCLC.

This meta-analysis was conducted according to the Preferred Reporting Items for Systematic Reviews and Meta-Analyses (PRISMA) guidelines [41]. A systematic computerized search of the electronic databases including PubMed, PMC, EMBASE, Web of Science, and Cochrane Library (up to July 2018) was performed. The search used the following terms variably combined: “thyroid transcription factor-1” or “TTF-1” AND “non-small-cell lung cancer” or “NSCLC” or “lung cancer”. The related articles function in the PubMed was used to identify all relevant articles. The references reported in the identified studies were also reviewed to complete the search.

Two investigators (BJK and HSK) extracted independently the data from each eligible article. If these two authors did not agree, the principle investigator (JHK) was consulted to settle the dispute through discussion.

The following data were extracted from the included studies: the first author, year of publication, country, inclusion period, sample size, disease stage, histology, cut-off criteria of TTF-1 expression, and survival data. When there were both univariate and multivariate analysis for survival, the data were extracted from multivariate analysis. If data were not reported in the original article, items were treated as “not available.” We did not contact the authors of the primary study to request additional data.

The survival outcomes were stratified according to the status of TTF-1 expression (negative vs. positive). Statistical values were obtained directly from the original articles. When papers had no HR and its 95% CI, the Engauge Digitizer software was used to estimate them from Kaplan-Meier curves. The RevMan version 5.3 was used to combine the data. For quantitative aggregation of the survival outcomes, HRs and their 95% CIs were combined to give the effective value. Subgroup analysis was performed according to the disease stage (I or III-IV). The heterogeneity across studies was estimated by the Q statistics and I2 inconsistency test. The fixed-effect model (Mantel-Haenszel method) was used for pooling homogeneous outcomes (p ≥ 0.1 and I2 ≤  50%), and the random-effects model (DerSimonian-Laird method) was selected when significant heterogeneity was detected (p  <  0.1 or I2 > 50%). The significance of the pooled HR and OR was determined by the Z-test, and an observed HR < 1.0 implies better survival for patients with positive TTF-1 staining.

The possibility of publication bias was assessed with visual inspection of the funnel plot [42]. For quantitative analyses, Egger's linear regression test was performed using the statistical software packages R (www.r-project.org) [43]. Statistical significance was considered for a p-value of less than 0.05 for summary HR and publication biases.

A total of 880 potentially relevant articles were initially found, but 835 of them were excluded after careful screening of the titles and abstracts. Of the remaining 45 potentially eligible studies, 24 were further excluded by the inclusion criteria. Finally, 21 studies were included in the meta-analysis [18-38]. Figure 1 shows the search flow diagram of this meta-analysis. 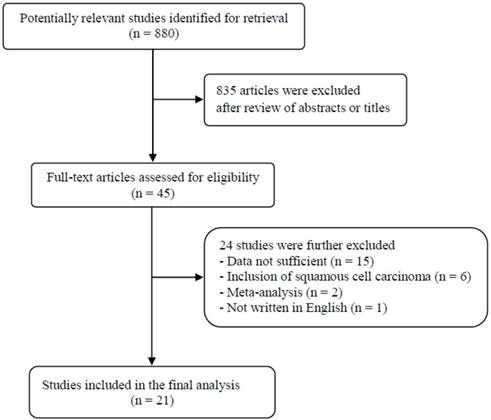 Impact of TTF-1 expression on survival

Subgroup-analyses according to the disease stage

In clinical practice, TTF-1 is most commonly used to distinguish primary lung ADC from non-pulmonary cancers that have metastasized to the lung [44]. TTF-1 expression by IHC has been detected in up to 95% of ADC of the lung, depending on the techniques, cut-off value of positive staining, and stage [29,37]. However, the vast majority of SQ NSCLCs and most extrapulmonary tumors lack TTF-1 expression [45].

Summary of the 21 included studies 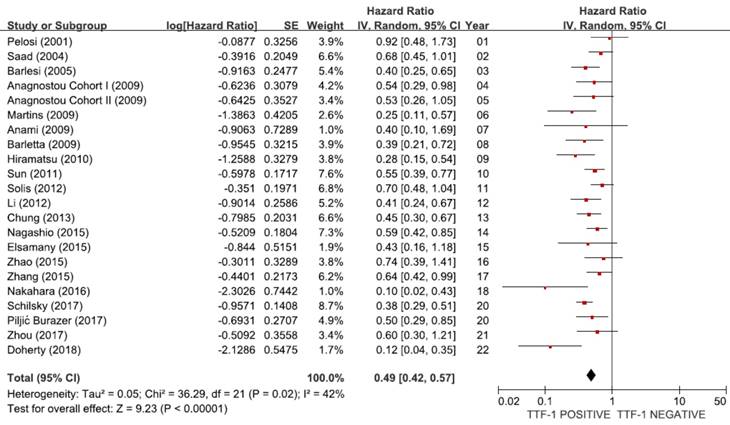 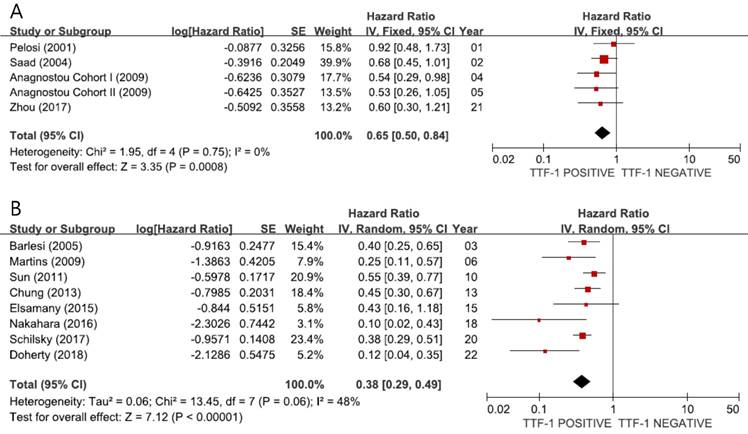 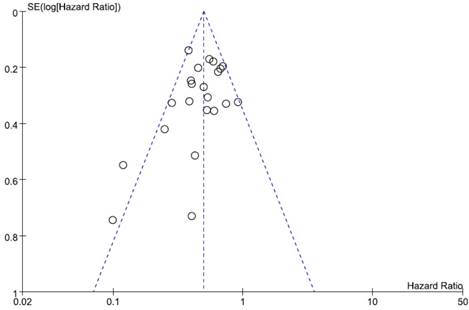 In the current meta-analysis, we investigated the prognostic value of TTF-1 expression in patients only with non-SQ NSCLC. We combined 21 published studies including 6,451 patients to yield summary statistics. The result revealed that TTF-1 expression had a significant correlation with favorable survival in patients with non-SQ NSCLC (HR = 0.49, p < 0.00001). Subgroup analysis demonstrated that TTF-1 overexpression had a significant favorable impact on survival in stage I (HR = 0.65, p = 0.0008). Because most patients included in our study did not receive adjuvant therapy, this finding indicates that TTF-1 can be an independent prognostic factor to delineate those who need to be further treated after surgery for patients with early-stage non-SQ NSCLC. In addition, when the analysis was restricted to stage III-IV, the prognostic impact of TTF-1 remained significant with the lower combined HR (0.38, p < 0.00001). These findings suggest that TTF-1 is a good prognostic marker for survival not only in early-stage but also in advanced non-SQ NSCLC. On the basis of the results from the current meta-analysis, TTF-1 needs to be selected for prospective studies with multivariate analysis including the known prognostic factors in NSCLC such as PS and stage.

Our study has several inherent limitations. First, the included studies showed considerable diversities in the techniques used for IHC. They used un-identical monoclonal antibodies at different concentration and dissimilar staining protocol. In addition, the cut-off criteria for positive TTF-1 staining was also various among studies. The wide range of incidence of TTF-1 positivity among studies (from 12.2% to 95.5%) might be attributable to the different IHC methods and criteria for TTF-1 overexpression. Therefore, it is still necessary to define the standardized methods to evaluate exactly the prognostic role of TTF-1 in non-SQ NSCLC. Second, this meta-analysis included the studies with non-SQ NSCLC regardless of EGFR mutation status. EGFR mutation is the strongest prognostic factor in non-SQ NSCLC. However, we could not evaluate the prognostic impact of TTF-1 according to the EGFR mutation status due to the insufficient data. Third, more than half studies were retrospectively performed and therefore might carry the biases of the retrospective design. Fourth, as we mentioned above, there were two meta-analyses regarding the prognostic impact of TTF-1 in NSCLC in the literature [39,40]. They included all subtypes of NSCLC from studies published between 1999 and 2012. However, we have improved upon the previous meta-analyses by adding 10 more recent studies published after 2013 [29-38] and the meta-analysis was performed in patients only with non-SQ NSCLC. Therefore, we assume that our results reflect more actually the prognostic impact of TTF-1 in non-SQ NSCLC. Finally, articles published only in English were included, which might bias the results.