Background: Little is known about the clinical features of breast cancer with synchronous hepatic metastases (BCSHM). In this retrospective study, we aimed to feature the incidence and survival outcome of BCSHM.

Methods: Data from the 2016 SEER*Stat database (version 8.3.2) was used. The effect of patient and tumor characteristics on the odds of developing of BCSHM was analyzed. Survival was investigated using Kaplan-Meier and Cox regression analyses. A competing risk model was also applied to further investigate cancer-specific survival.

Conclusion: In conclusion, patients with BCSHM had a poor survival, and only 13.5% of them were alive more than 3 years. Young patients with HER2+ tumors had higher risk for developing BCSHM, but with better prognosis.

Breast cancer (BC) is the most commonly diagnosed cancer in the world and remains the leading cause of cancer-related death in women[1, 2]. About 5-8% of BC patients develop metastatic disease at initial diagnosis[3, 4], and about 30% of women diagnosed with non-metastatic disease will relapse [5-7], depending on the initial stage, the biology of the tumor, and the type of treatment. The incidence of hepatic metastases ranked third in the distant metastasis, about 1-8%, after bone metastases and lung metastases[8, 9]. Distant metastasis of BC usually occurs later in the natural course of BC, most of them will be detected after a median of 3.2 years of initial cancer diagnosis[10]. Data on survival according to metastatic site in patients with a BC are absent, and as a result, specific information on survival of patients with hepatic metastases is unknown.

We extracted the data in SEER database and included patients diagnosed with invasive breast cancer from 2010 to 2014 in order to provide real representative data of recent years and sufficient follow-up time for survival analysis[13]. Patients with breast cancer in situ or unclear information about the presence of BCSHN were excluded. Subsequently, we excluded patients diagnosed by autopsy or death certificate, as well as patients without follow-up records. This study was approved by the Institutional Review Board of Sun Yat-sen University Cancer Center and written informed consent was exempted because patients cannot be identified.

Incidence was defined as the number of patients diagnosed with BCSHM divided by the total number of breast cancer patients. The incidence of BCSHM in patients with metastatic breast cancer was also calculated. In order to study the effect of tumor subtypes on the incidence and median survival of BCSHM, absolute numbers and incidence proportions of BCSHM were calculated and analyzed according to tumor type stratification. Breast cancer molecular subtypes were categorized as hormone receptor (HR) -positive/human epidermal growth factor receptor 2 (Her2)-negative, HR+/Her2+, HR-/HER2+ and triple-negative (HR negative and HER2 negative). Incidence proportions were also calculated after stratification by race, sex, age at diagnosis, pathological grade, etc. According to the SEER database, the race was classified as white, black, Asian or Pacific Islander, and American Indian/Alaska Native.

Multivariate logistic regression was used to determine whether age, sex, and race are associated with the presence of BCSHM at cancer diagnosis; other variables in the model include marital status, insurance status, pathological grade, molecular subtype, and extrahepatic metastases. The presence of bone, lung and brain metastases at diagnosis can be obtained in the SEER database and used to characterize the degree of systemic disease in the patient in this study. The Kaplan-Meier method was used to calculate the survival estimate. Multivariate Cox regression was performed using the same variables as the logistic regression model mentioned above to identify covariates associated with increased all-cause mortality. Statistical analysis was performed using SPSS statistical software (SPSS IBM STATISTICS 21), apart from the Kaplan-Meier curve by SAS 9.4 software (SAS Institute, Cary, NC) and breast cancer-specific mortality using a competing risk analysis model by cmprsk package of R software (version 3.4.1).

In the entire cohort, 3468 patients with BCSHM, reflecting the incidence of BCSHM, accounted for 1.44% of the all patients with BC, and 25.8% of the subgroup of metastatic diseases.

Breast cancer-specific mortality in patients with BCSHM among newly diagnosed breast cancer was also shown in Table 3. Table 4 showed the median survival of subclasses that are stratified by site of extrahepatic metastasis. In general, the median survival of patients involved in more extrahepatic metastases was poor. We also found that the presence of BCSHM at the time of initial diagnosis was associated with shorter survival time compared with patients with metastatic diseases without liver involvement (Table 4).

To the best of our knowledge, the current study is by far the largest study for assessing the incidence and prognosis for de novo liver metastasis from breast cancer. In this large cohort study, data from 240 911 breast cancer were analyzed, and we identified 3468 patients with de novo live metastasis, accounting for 1.44% of all breast cancer patients. Higher BCSHM Incidence proportions were among patients with younger age, black race, HER2+ subtypes, triple negative subtypes, unmarried status, uninsured status, higher pathological grade. The presence of BCSHM has a negative effect on the prognosis of patients and the survival of patients with BCSHM is subtype-dependent.

It was reported that the incidence of BCSHM among metastatic BC varied from 20% to 35%[14, 15]. The incidence of BCSHM among subgroup with metastatic diseases was 25.8% in this study, consistent with the previously reported results. Almost half of all BCSHM were HR+/HER2- tumors. As patients with HR+/HER2- tumors accounted for approximately two-thirds of all BC patients, the odds of developing of BCSHM of HR+/HER2- tumors is lower than other subtypes. In this study, patients with HR-/ HER2+ and HR+/HER2+ tumors were most often diagnosed with synchronous hepatic metastases (4.24% and 2.78% of patients had BCSHM). In addition, in the subgroup of metastatic disease, most of these patients had BCSHM (43.8% and 35.8%). To date, previous studies have explored patterns of recurrence and metastasis of breast cancer subtypes. Our study is the first large-scale study to specially explore BCSHM and tumor subtypes. Interestingly, the direction of association between hepatic metastasis and subtype is similar in our study of BCSHM and previous studies of recurrent hepatic metastasis: hepatic metastasis including BCSHM and liver relapse is particularly higher in HER2+ subtypes [6, 16].

Few studies specifically describe which patients are more likely to have BSHHM. In addition to the tumor subtype, younger age, black race, unmarried status, uninsured status, and higher pathological grade are relevant factors for the developing of BCSHM in this study and were described earlier as relevant factors for advanced disease[17-21]. Some studies also describe possible genetic changes as relevant factors for distant metastasis of BCs[22]. Unfortunately, data on genetics and Ki-67% are not yet available in our study[18].

Kaplan-Meier curves of survival among patients with hepatic metastases at the initial diagnosis of breast cancer. A. Overall survival of patients with BCSHM. B. Survival curves stratified by different molecular subtypes. C. Survival curves stratified by BCSHM and non-BCSHM among metastatic diseases. D. Survival stratified by the extent of extrahepatic metastatic diseases which is classified by the number of metastatic sites to the bone, lung, or brain. HER2, human epidermal growth factor receptor 2; HR, hormone receptor. + Denotes positive; - denotes negative. 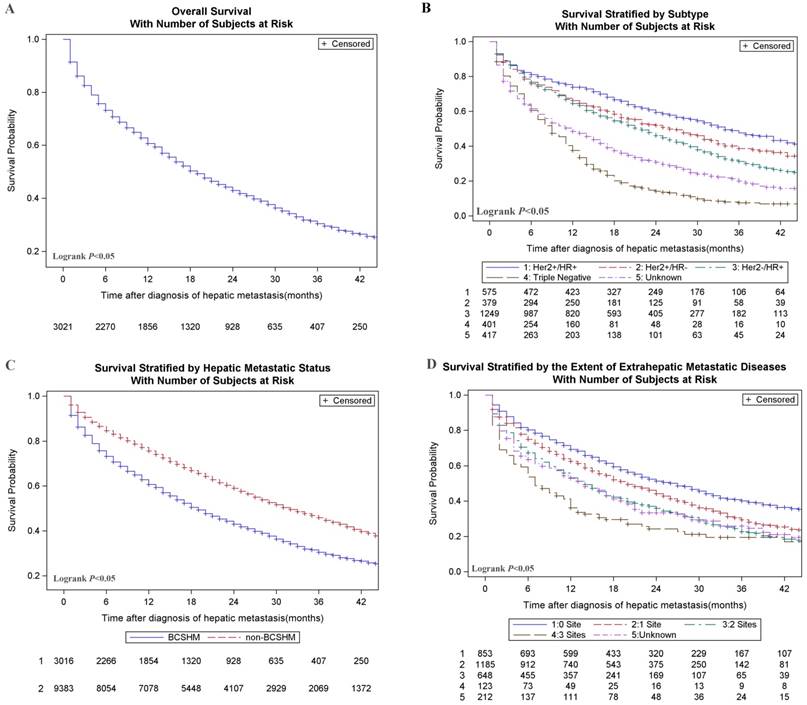 The median survival after BCSHM diagnosis was 14 months, but significant differences were found based on tumor subtypes. HR+/HER2+ patients had the longest survival time (median survival, 31.0 months), and triple-negative breast cancer was associated with the worst survival (median survival, 8.0 Month). We found that HR+/HER2+ subtype BCSHM patients had a better survival rate than HR+/ HER2- subtype, whereas HR-/ HER2+ subtype had better survival rates than triple negative subtype. This difference may be due to the introduction of HER2-targeted therapy because all patients in our study were diagnosed after 2010. Previous studies have demonstrated the efficacy of trastuzumab in metastatic breast cancer[23-25]. In agreement with previous studies[26, 27], triple negative breast cancer had the worst prognosis, and in our BCSHM subgroup this phenomenon remained. Hopefully, new therapies, including PARP inhibitors and immunotherapy, have been shown to improve the survival of triple-negative breast cancers, but further research is needed if these new therapies can improve the prognosis of triple-negative BCSHM[28, 29].

One notable finding is that although elderly patients have a lower risk of developing BCSHM than younger patients, the prognosis of elderly with BCSHM is significantly worse than in younger patients. The possible cause of our results was that older patients tend to have poor adherence to standard treatment regimens compared with young patients, and inadequate treatment may lead to higher mortality rates. Another possibility is that older patients with BCSHM may be have some severe comorbidities that affect their ability to fully benefit from the treatment or fail to accept some treatments with serious side effects[30].

Interestingly, married patients are less likely to have BCSHM than unmarried women and have a lower risk of breast-related death. In addition, the lack of health insurance increases the incidence of BCSHM and the risk of death. These indicated that marital status and insurance status may affect how cancer patients get access to health services. It is conceivable that both unmarried and low-income patients have a more vulnerable support network, which may have contributed to the detection of their tumor only after it had metastasized. On the other hand, these factors may in turn affect access to advanced therapies and adequate diseases management. In fact, although the treatment of BC is becoming more effective, it also becomes more complicated and expensive at the same time. Some new drugs, such as monoclonal antibodies, immunomodulators and proteasome inhibitors, have recently been approved for advanced breast cancer and may further increase the cost of treatment and exacerbate these differences[31].

The Median Survival of Patients with Breast Cancer Stratified by Sites of Metastases.

Our research also involves several implications for future clinical research and practice. First, special attention should be paid to the socio-demographic factors that increase the incidence and mortality of BCSHM. Our results show that black ethnicity, unmarried status, and uninsured status have a relatively higher risk of developing hepatic metastases and a high risk of death. In designing randomized controlled studies, researchers should pay attention to adjusting these confounding factors. Second, patients with unknown molecular typing have a higher risk of BCSHM and poorer survival and also indicating the important role of molecular type in guiding therapies. Unlike previous studies, our results show that younger patients with BCSHM have a better prognosis. Future research is needed to further evaluate and optimize the treatment and management of elderly patients with metastatic breast cancer.

We also acknowledge that this study is limited by its inherent nature. First, since the SEER database does not provide information on the number and size of hepatic metastases, we can not analyze the impact of the size and number of metastases on the prognosis of patients. Future research based on more complete databases should be used to address this important issue. Second, we were unable to evaluate the effect of treatment on the prognosis of patients with BCSHM, since information about liver surgery, endocrine therapy, and HER2-targeted therapy was not recorded in the SEER database, which may help to analyze some of the differences observed in survival based on prognostic variables. Finally, we were not able to analyze other important factors such as performance status, BMI index, and smoking status that may affect morbidity or prognosis because the SEER database did not provide these data.

In conclusion, about 1.43% of BC patients have BCSHM. The incidence and prognosis of BCSHM vary with age, ethnicity, and subtype. Young patients with HER2+ tumors had higher risk for developing BCSHM, but with better prognosis. Advanced age and triple-negative subtype predict worse prognosis. Low socioeconomic status is associated with an increased risk of hepatic metastases and worse prognosis.