Due to peritoneal metastasis and frequent recurrence, ovarian cancer has the highest mortality among gynecological cancers. Epithelial to mesenchymal transition (EMT) contributes to ovarian tumor metastasis. In this study, we report for the first time that metal regulatory transcription factor 1 (MTF1) was upregulated in ovarian cancer, and its high expression was associated with poor patient survival and disease relapse. Knockout of MTF1 using lentiviral CRISPR/Cas9 nickase vector-mediated gene editing inhibited EMT by upregulating epithelial cell markers E-cadherin and cytokeratin 7, and downregulating mesenchymal markers Snai2 and β-catenin in ovarian cancer SKOV3 and OVCAR3 cells. Loss of MTF1 reduced cell proliferation, migration, and invasion in both SKOV3 and OVCAR3 cells. Knockout of MTF1 upregulated the expression of the KLF4 transcription factor, and attenuated two cellular survival pathways, ERK1/2 and AKT. Our studies demonstrated that MTF1 plays an oncogenic role and contributes to ovarian tumor metastasis by promoting EMT. MTF1 may be a novel biomarker for early diagnosis as well as a drug target for clinical therapy.

Ovarian cancer is a malignancy of women with high mortality. In the US alone, over 15,000 patients die and 20,000 new cases are diagnosed each year1,2. Ovarian cancer patients have no apparent symptoms at early stages, and the disease advances to the late stages before diagnosis. Ovarian tumors metastasize to multiple peritoneal organs from primary organ ovaries and frequently recur due to chemoresistance3-5. The epithelial to mesenchymal transition (EMT) is a biological process characterized by loss of epithelial cell polarity and cell-cell junctions, and the gain of migratory and invasive properties. Accumulating evidence indicates that EMT contributes to tumor metastasis and chemoresistance6-11. Therefore, identifying the genes or pathways involved in EMT will provide a novel approach for cancer therapy. EMT is regulated by multiple transcription factors including Snai1/2, ZEB1/2, and twist112, and signaling pathways including TGFβ, ERK1/2, AKT, Notch, and WNT/catenin13-16. For the first time, we have identified the metal responsive transcription factor 1 (MTF1) contributing to EMT in ovarian cancer cells.

MTF1 is a zinc finger transcription factor that promotes cell survival by activating downstream target genes, including the metal binding protein metallothionein (MT1), matrix metalloproteinases (MMPs), the zinc efflux protein ZnT-1, and the zinc influx regulator ZIP-117-20. MTF1 and its regulated gene MT1 can be activated by zinc and copper in the presence of p53 in breast cancer cells, but not in p53 inactivated cells21. MTF1 has not been well investigated in human cancers. MTF1 is upregulated in breast, lung and cervical cancers22. However, in ovarian cancer the role of MTF1 is largely unknown. MTF1 is regulated by zinc and copper, and the ratio of copper versus zinc and CA125 together have been used as biomarkers for ovarian cancer diagnosis 23,24. MTF1 is a biomarker for the prediction of the disease recurrence in advanced-stage head and neck carcinoma25.

The paraffin-embedded (FFPE) blocks of fully de-identified ovarian serous carcinoma were obtained from the Tissue Services Core of the University of Tennessee Health Science Center (UTHSC). Hematoxylin and eosin (H&E) staining was performed by Histology Core of UTHSC and reviewed by a pathologist.

The lentiviral CRISPR/Cas9 nickase-mediated MTF1 gene editing vectors were constructed by synthesizing and annealing two gRNAs and subcloning them in the BsmII site of lentiviral Lentiguide-puro vector (#52963, Addgene). Two gRNA sequences, 5' GCCATTTGAGTGTGACGTGC and 5' CCTTCGTGTGCACTCGCACG, were designed to target upstream and downstream regions of exon 2 of MTF1. CRISPR/cas9 nickase was driven by EF1a promoter in LentiCas9-blast vector (#52962, Addgene). Lentivirus was produced by packaging in 293FT cells as published previously26. MTF1 stable KO cell lines were established by transducing the SKOV3 or OVCAR3 cells lentiCas9-blast Cas9 nickase vector and selected with 10 μg/ml blasticidin, and subsequently transduced with the lentiviral CRISPR/Cas9 nickase-mediated MTF1 gRNA vector and selected with 5 μg/ml puromycin. LentiCas9-blast was used as the control vector without gRNAs.

SKOV3 or OVCAR3 cells (8,000 cells/well), transduced with lentiviral CRISPR/Cas9 nickase for MTF1 gRNA and control vectors, were seeded into 96-well plates and cultured for 24, 48, and 72 h. MTT reagent (10 µl) was added to each well and incubated for ~4 h. Then reaction was stopped by adding 100 µl detergent reagent and the plates were incubated at room temperature in the dark for 2 h. Cell proliferation was assessed by measuring the absorbance at 570 nm wavelength.

MTF1 KO and control SKOV3 and OVCAR3 cells were plated into 6-well plates (400 cells/well) and cultured for 10 days. Cell colonies were stained with crystal violet and the number of colonies was counted.

The cell migration assay was performed using modified transwell chambers (BD Falcon™, San Jose, CA) inserted into 24-well cell culture plates. SKOV3 or OVCAR3 stable KO and control cells (3 × 104) were suspended in 300 µl serum-free DMEM and added into the upper chamber. DMEM containing 10% FBS (serving as the chemoattractant) was added into the lower chamber of each well and incubated for 24 h. The medium and non-migrated cells in the upper chamber were removed, while the migrated cells on the lower side of the membranes were fixed with methanol and stained with crystal violet. Pictures were taken at 10x magnification, and cells from at least three different fields were counted.

SKOV3 and OVCAR3 MTF1 stable KO and control cells (5 × 105) were seeded in serum-free DMEM onto inserts precoated with Matrigel (BD BioCoatTM) using 24-well Tumor Invasion System (BD BioSciences, San Jose, CA). DMEM containing 10% FBS was added to the bottom chamber of the invasion system as the chemoattractant for 24h. The transwell inserts were fixed with methanol for 20 min, and stained for 5 min with H&E. Pictures were taken at 10x magnification and invaded cells were counted from at least three different fields.

To evaluate the correlation of MTF1 mRNA expression with ovarian patient survival, we queried TCGA data based on RNA-seq using The Human Protein Atlas. The expression level of MTF1 was quantified using the FPKMs (number Fragments Per Kilobase of exon per Million reads) with a detection threshold of 1 FPKM. The median and maximally separated Kaplan-Meier plots are presented by comparing low and high expression groups in log-rank in the Human Protein Atlas27.

Significant differences were determined from at least two independent experiments performed in triplicate by Student's t-test and data were presented as mean ± SD. P < 0.05 was considered significant.

MTF1 function has not been well investigated and its role is completely unknown in ovarian cancer. To determine the function of MTF1 in ovarian cancer cells, we examined cell proliferation in MTF1 KO and control SKOV3 and OVCAR3 cells by performing MTT assays. Knockout of MTF1 significantly reduced cell proliferation in both SKOV3 and OVCAR3 cells compared to control cells at all three time points (24, 48, and 72 h) (Fig. 3A, B). We also examined cell survival using cell colony formation assays; knockout of MTF1 led to significant inhibition of colony formation in both SKOV3 (Fig. 3C) and OVCAR3 cells (Fig. 3D). Our data indicate that knockout of MTF1 in ovarian cancer cells led to inhibition of cell proliferation and colony formation. 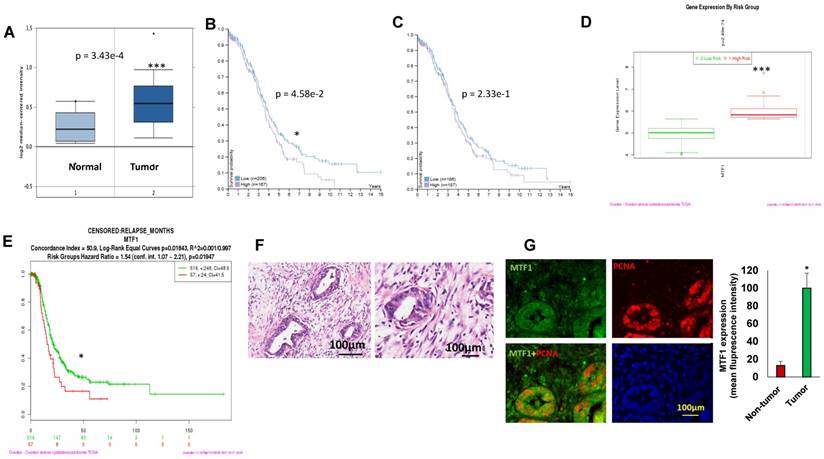 We showed previously that the transcription factor KLF4 inhibits EMT by attenuating the TGFβ pathway in ovarian cancer cells31. To understand the molecular mechanism underlying MTF1-mediated EMT, we examined KLF4 expression in both MTF1 KO and control SKOV3 and OVCAR3 cells by Western blot. We found that KLF4 expression was upregulated in MTF1 KO cells compared to control (Fig. 4A). We also examined two cellular survival pathways, including ERK1/2 and AKT in MTF1 KO and control SKOV3 and OVCAR3 cells. Loss of MTF1 led to attenuation of phospho-ERK1/2 and phospho-AKT in both cell lines, but total ERK1/2 and AKT were not significantly altered, as compared to control cells (Fig. 4B, C). Our results indicated a novel molecular mechanism underlying MTF1 mediated EMT that MTF1 transcriptionally repressed KLF4 expression and attenuated two cellular survival pathways ERK1/2 and AKT, thus inhibited EMT in ovarian cancer cells (Fig.4D). 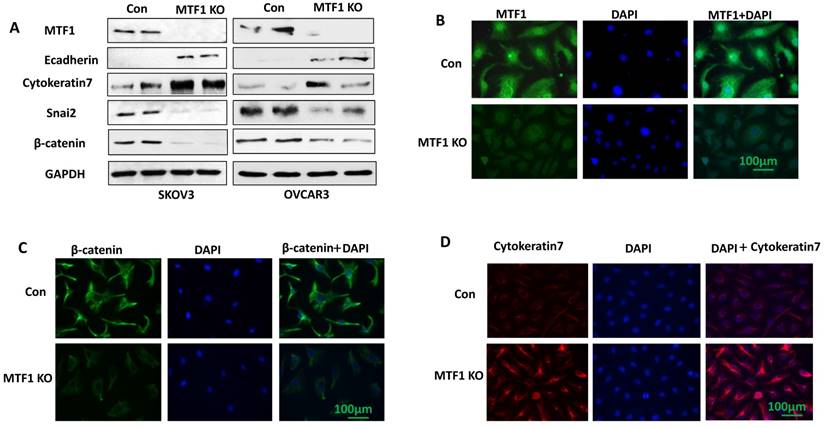 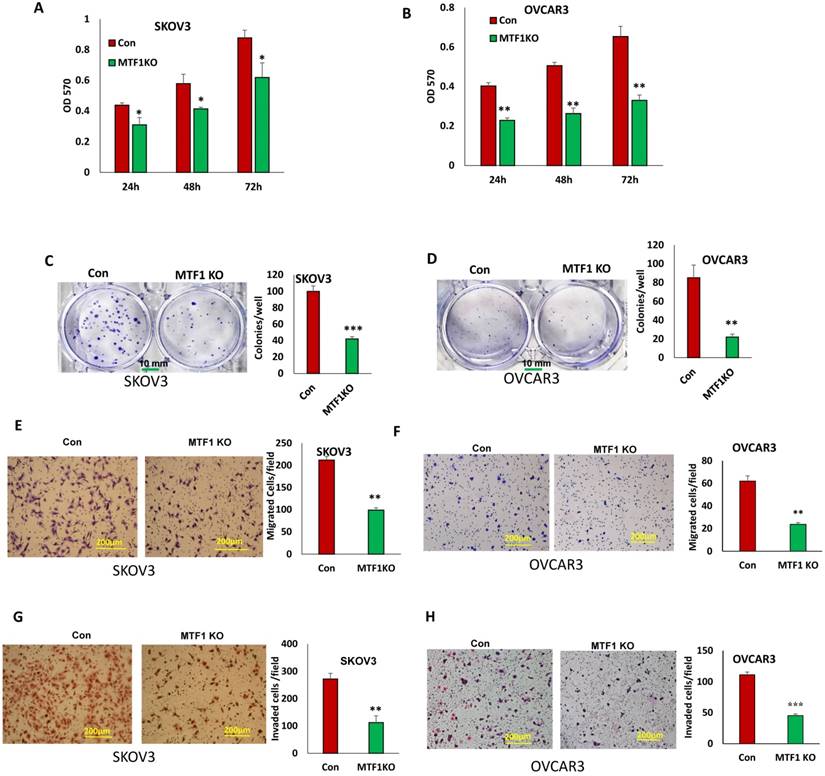 Knockout of MTF1 expression inhibited EMT in ovarian cancer cells. Knockout was accomplished using lentiviral CRISPR/Cas9 nickase vector-mediated gene editing. EMT acquisition contributes to aggressive cellular behavior, and is associated with tumor metastasis and chemoresistance. Our studies suggest that MTF1 may contribute to tumor metastasis and chemoresistance, thus leading to ovarian cancer relapse. Thus, MTF1 may be a promising drug target for ovarian cancer therapy. In particular, a small molecule inhibitor of MTF1 APTO-253 was recently approved for phase I clinical trials to treat several other cancers33. We examined the function of MTF1 in ovarian cancer SKOV3 and OVCAR3 KO and control cells by performing cell functional assays, and found that knockout of MTF1 resulted in reduced cell proliferation, colony formation, migration, and invasion in both SKOV3 and OVCAR3 cells.

MTF1, as a metal regulatory transcription factor, regulates gene expression by binding to the metal regulatory element (MRE) within the promoter of target genes, in response to excess zinc and other stresses 34,35. Although we do not yet know how MTF1 functions in response to zinc, we found that zinc can induce dose-dependent expression of MTF1 in ovarian cancer cells (data not shown). We are in the process of investigating the signaling of zinc/MTF1 axis in contributing to ovarian cancer metastasis and chemoresistance. However, we found that knockout of MTF1 resulted in upregulation of KLF4 expression in both ovarian cancer SKOV3 and OVCAR3 cells (Fig. 4A), indicating that MTF1 negatively regulates KLF4 expression. KLF4 functions as a tumor suppressor and inhibits EMT in ovarian cancer cells by targeting the TGFβ pathway31. Therefore, it is possible that MTF1 in its function as a transcription factor regulates KLF4 expression through transcriptional repression, which is a hypothesis requiring further analysis. MTF1 reportedly not only activates downstream target genes but also can repress the downstream target genes by interacting with co-repressors35. Interestingly, KLF4 was identified as one of target genes of MTF1 in human adenocarcinoma cell line HT-2936. Therefore, one of the molecular mechanisms underlying MTF1-mediated EMT in ovarian cancer cells may be through negatively regulating KLF4 expression. Previous studies showed that activation of ERK1/2 and AKT pathways contributes to EMT in numerous human cancers, including ovarian cancer16,37-40. Our studies indicated that knockout of MTF1 attenuated the ERK1/2 and PI3K/AKT pathways in both SKOV3 and OVCAR3 ovarian cancer cells. MTF1 can also regulate EMT by targeting these two pathways, although it is unknown whether and how MTF1 regulates these pathways via repressing KLF4 expression. Further studies are required to reveal the exact mechanism how MTF1/KLF4 axis regulates EMT in ovarian cancer cells.

This study was supported by a grant (1R21CA216585-01A1) from National Institute of Health and grant from West Cancer Center to Dr. Yue. This study was partially supported by a grant from the National Natural Science Foundation of China (No. 81272503) to Dr. Zheng and the content is solely the responsibility of the authors and does not necessarily represent the official views of the sponsoring organizations. 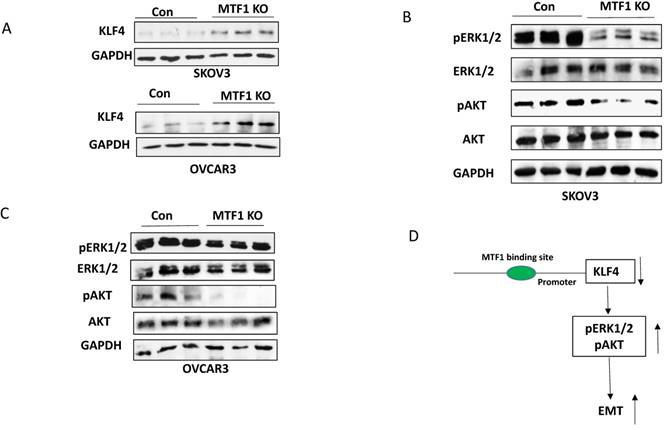