Overexpression of FNDC1 in Gastric Cancer and its Prognostic Significance

Objectives: The aims of this study were to compare the expression of fibronectin type III domain containing 1 (FNDC1) in gastric cancer (GC) and normal gastric tissue, to explore the prognostic significance of FNDC1 expression in patients with gastric adenocarcinoma, and to analyze FNDC1-related signaling pathways.

Methods: The expression level of FNDC1 was initially predicted using the Oncomine and Cancer Genome Atlas databases. A Kaplan-Meier plotter database was mined to examine the clinical prognostic significance of FNDC1 mRNA in patients with GC. Subsequently, immunohistochemistry was used to measure FNDC1 protein expression levels in tissue from 90 cases of GC and paired adjacent normal tissue. Kaplan-Meier univariate and Cox multivariate survival analyses were used to determine the prognostic role of FNDC1 expression.

Conclusions: FNDC1 was highly expressed in GC, and high expression of FNDC1 was an independent predictor of poor prognosis in patients with GC. FNDC1 co-expressed genes were largely enriched in extracellular matrix-receptor interactions, which are closely related to tumor metastasis.

Gastric cancer (GC) is the fifth most common malignant tumor of the digestive tract and the third most common cause of cancer-related death worldwide[1, 2]. Most patients with GC are diagnosed at advanced stages of the disease, and thus have lost the best opportunities for treatment[3]. Despite gradual declines in the incidence of and mortality from GC in recent years, the overall prognosis of GC has not improved significantly[4]. Thus, exploring highly specific and sensitive biomarkers and identifying new molecular targets may not only help clinicians predict prognosis, but also help clarify the mechanism underlying gastric tumorigenesis, which has profound significance for the development of new drug targets.

Fibronectin type III domain containing 1 (FNDC1) is a protein-coding and disease-related gene, also known as AGS8, FNDC2, or MEL4B, which contains the conserved fibronectin type III domain of fibronectin (FN)[5-7]. FN is an important type of extracellular matrix (ECM) protein and a well-known regulator of tumorigenesis that is involved in cell proliferation, migration, and invasion in several human tumors[8-10]. Liu et al.[11] reported that FN may play a critical role in the modulation of cell proliferation and invasion via mTOR signaling activation in gallbladder cancer progression. Moreover, Vizoso and colleagues[12] found that breast cancer cells with distant metastases frequently expressed intracellular FN, and that FN expression by tumor cells was associated strongly with matrix metalloprotease expression by stromal mononuclear inflammatory cells, which may represent crosstalk that is of prognostic relevance in breast cancer. However, a limited number of studies have examined the function of FNDC1. Although reports have described the potential role of FNDC1 in inflammation and hypoxia-induced apoptosis of cardiomyocytes[13, 14], the expression levels of FNDC1 in malignant tumors, especially in GC, have not been well defined.

Therefore, in the present study, the Cancer Genome Atlas (TCGA) and Oncomine databases were used to compare the expression levels of FNDC1 mRNA in GC and normal gastric tissue. In addition, the Kaplan-Meier plotter database was used to evaluate the prognostic significance of FNDC1 expression in patients with GC. Moreover, a tissue microarray (TMA) was used to examine the expression level of FNDC1 protein in 90 GC cases, and its prognostic value was further investigated using Kaplan-Meier and Cox survival analyses.

The cancer-related public databases Oncomine and TCGA were used to predict the expression levels of FNDC1 in GC and normal gastric tissue. In the Oncomine database, we entered the gene name “FNDC1” and chose the differential gene analysis module (GC versus normal) to retrieve the results. Expression of FNDC1 between primary GC and normal gastric tissue was also reviewed using the GEPIA browser (http://gepia.cancer-pku.cn/), which is an online tool for the analysis of data provided by TCGA and the GTEx projects[15]. The association between FNDC1 expression and overall survival (OS) was analyzed by data mining in the Kaplan-Meier plotter database (http://kmplot.com), which is an online database that enables validation of survival-associated GC biomarkers using transcriptomic data from 1065 patients[16]. The median FNDC1 expression was used as the cutoff. Hazard ratios with 95% confidence intervals and log-rank P values were calculated.

The genes co-expressed with FNDC1 in GC (absolute Pearson's r ≥ 0.5) were identified using the cBioPortal database (http://www.cbioportal.org/). Then, the co-expressed genes were loaded into ClueGo in Cytoscape for analysis of Kyoto Encyclopedia of Genes and Genomes (KEGG) pathways[17]. Only pathways with P values ≤ 0.05 were included.

Relationship between FNDC1 levels and clinicopathological parameters of GC patients.

A human TMA (cat no. HStmA180Su09) containing paired tumor and normal tissue samples from 90 cases was purchased from Shanghai Outdo Biotech Co., Ltd. (Shanghai, China). Detailed clinical characteristics, including patient age and sex, tumor size, histologic differentiation, and TNM stage, are shown in Table 1. All patients with GC received radical surgery between December 2009 and June 2010, with ultimate follow-up through June 2016. Patients who underwent chemotherapy or radiotherapy before the surgery were excluded from the study.

Immunohistochemistry and interpretation of the results

Immunohistochemical staining was performed according to the manufacturer's protocol to examine the expression levels of FNDC1 in GC and matched normal tissue. An FNDC1 rabbit polyclonal antibody was purchased from Absin Corporation (abs127634a; Absin, China) and used at a dilution of 1:500. Two pathologists independently evaluated immunostaining of each tissue section in a double-blind manner. The immunoreactive score (IRS) for each slice was calculated by multiplying the staining intensity in four gradations (0, negative; 1, weak; 2, moderate; 3, strong) with the percentage of positive cells in five gradations (0, negative; 1, < 10%; 2, 10%-50%; 3, 51%-80%; 4, > 80%), each specimen was measured in three different magnification fields[18]. IRS ranged from 0 to 12, with IRS > 4 indicating high FNDC1 expression and IRS ≤ 4 indicating low FNDC1 expression. 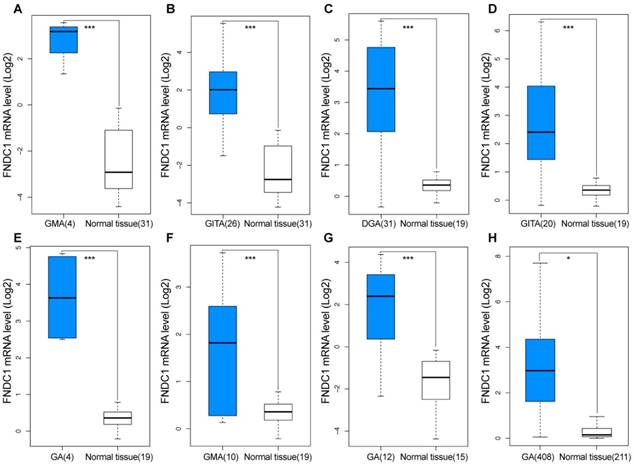 The SPSS 24.0 software (SPSS, Inc., Chicago, IL, USA) was used to analyze the experimental data. Quantitative data were presented as means ± standard deviations. The differential expression levels of FNDC1 mRNA between the GC group and the normal tissue group from TCGA and Oncomine databases were analyzed using the independent-samples t test. The chi-squared test was performed to analyze the relationship between FNDC1 expression level and clinicopathological parameters. IRS scores of FNDC1 staining in tumor and adjacent non-tumor gastric tissues were compared by Wilcoxon rank-sum test. Kaplan-Meier survival analyses were performed using the log-rank test, and a Cox regression model was established for a multivariate survival analysis to determine prognostic factors using variables that were significant in the univariate analysis. P values < 0.05 were considered to indicate statistical significance.

Overexpression of FNDC1 mRNA and protein levels in GC

TCGA and Oncomine database data were used to examine the differential expression levels of FNDC1 mRNA between GC and normal gastric tissue. The FNDC1 mRNA expression level was dramatically higher in GC tissue than in normal gastric tissue (all P < 0.05, Figure 1A-H). To confirm the predictive results, immunohistochemical assays were performed to examine FNDC1 protein levels in 90 cases of GC with paired adjacent tissue (Figure 2A, B). The mean ± standard deviation IRS scores of FNDC1 in cancerous tissue and adjacent normal tissue were 5.822 ± 2.368 and 4.526 ± 2.219, respectively. The IRS scores of FNDC1 in tumors were much higher than those in adjacent non-tumor gastric tissues (P < 0.001; Figure 2C and Supplementary Table S1-S2), indicating that the expression level of FNDC1 protein was significantly higher in GC tissues than in paired normal tissues.

Relationships between FNDC1 and clinicopathological parameters of patients with GC

FNDC1 immunoreactivity was higher in gastric cancer tissues than in adjacent normal tissues. (A) Representative high expression of FNDC1 in GC tissue (HE, 200

); (B) Representative low expression of FNDC1 in matched adjacent normal tissue (HE, 200 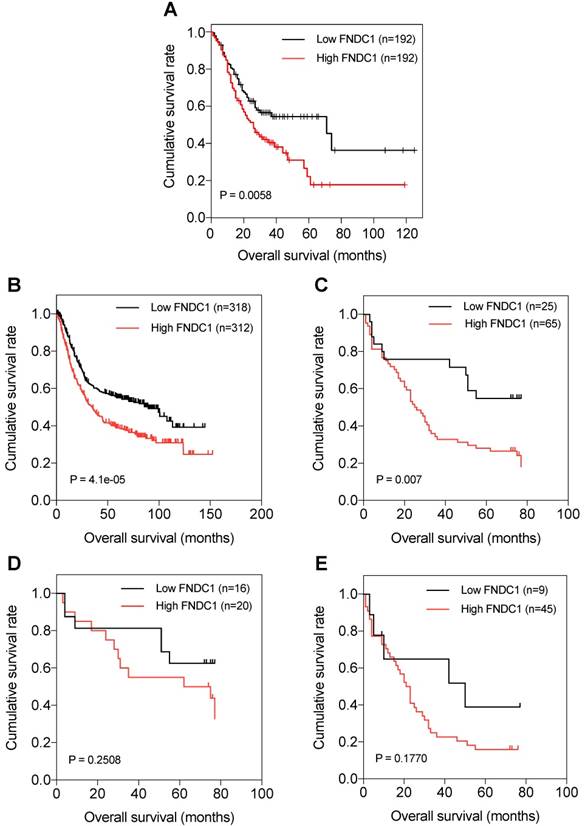 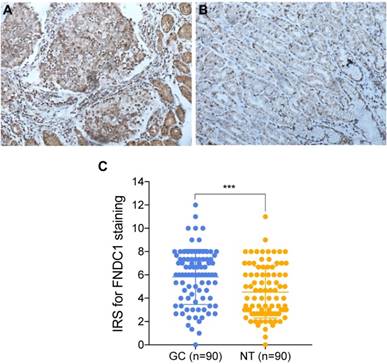 Cox univariate survival analysis of FNDC1 and other clinicopathological parameters in GC patients.

Cox multivariate analysis of FNDC1 and other clinicopathological parameters in GC patients. 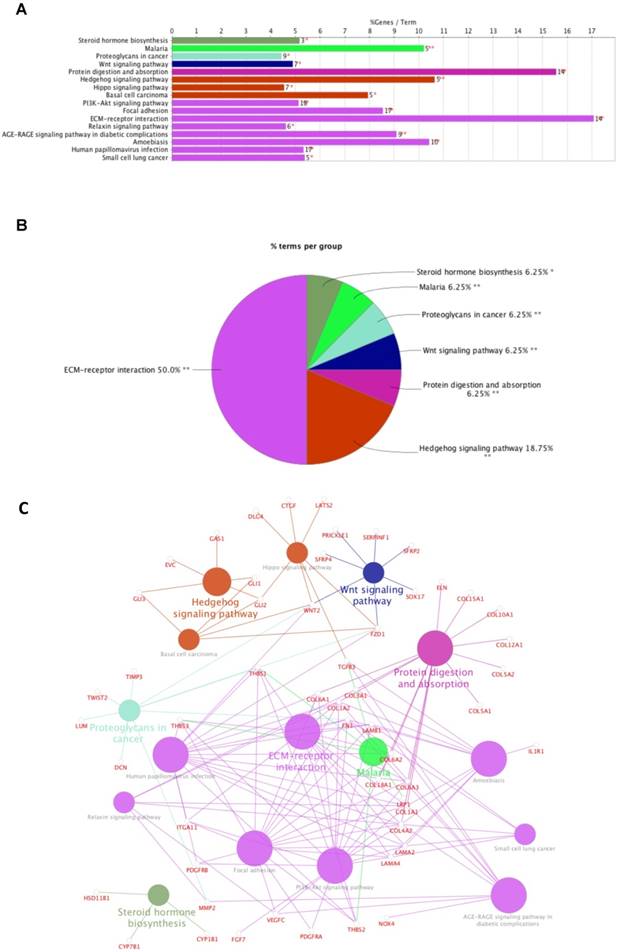 KEGG pathway analysis of FNDC1 and its co-expressed genes in TCGA-STAD.

The FNDC1 gene is located in the 6q25.3 human chromosomal region, and was first identified as a differentially expressed mRNA from human dermal fibroblasts. The biological function of FNDC1 has yet to be well defined, and the majority of studies concerning FNDC1 have shown it may play an important role in inflammation. The minor (T) allele of SNP rs2392989 was reported to confer a higher risk of acute otitis media and to be correlated with higher expression of FNDC1[6]. In addition, FNDC1 expression in the mouse middle ear was upregulated upon lipopolysaccharide treatment, which is known to be a potent inducer of inflammation through stimulation of transforming growth factor-

, and interleukin-1 signaling[19]. To date, the only functional study of FNDC1 in human cancer was reported by Das and colleagues[5]. They discovered that miR-1207-3p was significantly under-expressed in prostate cancer (PCa) cell lines in comparison with normal prostate epithelial cells, and that increased expression of microRNA-1207-3p significantly inhibited proliferation and migration, and induced apoptosis of PCa cells via direct targeting of FNDC1. They also revealed significant overexpression of FNDC1, fibronectin (FN1), and the androgen receptor in human PCa cell lines and tissue, which was correlated positively with aggressive PCa. However, the expression level of FNDC1 and its potential clinical significance in GC have not been well defined.

In the current study, we first used bioinformatics to predict the high expression of FNDC1 in gastric adenocarcinoma tissue compared with normal gastric tissue using the Oncomine and TCGA public databases. Then, immunohistochemistry was used to verify that FNDC1 protein expression levels were significantly higher in the GC tissue group compared with the normal tissue group. These results were consistent with those of bioinformatic predictions and suggested that FNDC1 acts as an oncogene by promoting the development of gastric adenocarcinoma. Subsequently, the clinical prognostic significance of FNDC1 gene expression levels in patients with GC was examined. First, differential expression levels of FNDC1 protein were associated significantly with sex and TNM stage in patients with GC. Moreover, a Kaplan-Meier univariate survival analysis showed that, compared with those with low FNDC1 mRNA and protein expression levels, patients with GC with high FNDC1 expression levels had remarkably shorter OS. A multivariate Cox analysis showed that high expression of FNDC1 and advanced TNM stage were independent predictors of unfavorable prognosis in patients with GC. Our results also showed that the genes co-expressed with FNDC1 in GC were most enriched in ECM-receptor interactions. It is well known that the complex interactions between tumor cells and the ECM may play important roles in tumor metastasis, including cell differentiation, migration, cytoskeletal reorganization, and morphological transition[20, 21]. According to previous reports[22, 23], FN is considered a key element in ECM components and plays an important role in cancer cell proliferation, differentiation, and migration. As FNDC1 contains the conserved fibronectin type III domain of FN, we inferred that FNDC1 may play an important role in human cancer tumorigenesis. All of these findings indicate that FNDC1 was over-expressed in GC tissue and that high levels of FNDC1 expression could indicate poor prognosis for patients with GC. Thus, this gene may be a key target involved in the growth and metastasis of GC.

However, this study is not without limitations. First, the cases used were collected non-sequentially, which may have resulted in selection bias and influenced the final statistical results. Next, tissue from only 90 cases was used in this study, which was a small sample. In addition, some clinicopathological data associated with GC, such as disease-free survival, were not included. Lastly, although KEGG pathway analysis indicated that the genes co-expressed with FNDC1 were enriched in ECM-receptor interactions, the detailed underlying molecular mechanisms have not been determined. The above limitations should be addressed in future studies.

In conclusion, our study revealed that FNDC1 was highly expressed in GC, and overexpression of FNDC1 was an independent predictor of reduced prognosis in patients with GC. FNDC1 co-expressed genes are largely enriched in ECM-receptor interactions, which are related to tumor metastasis. FNDC1 may be a potential prognostic biomarker and therapeutic target for GC in the future.