Long non-coding RNAs (lncRNAs) are dysregulated in various cancers. However, the clinical relevance and functional roles of AFAP1-AS1 in colon cancer (CC) have not been clarified. We analyzed the lncRNA expression patterns in Gene Expression Omnibus (GEO) datasets and the Cancer Genome Atlas (TCGA) RNA-seq datasets, and found that the expression level of AFAP1-AS1 was significantly elevated in CC tissues. High levels of AFAP1-AS1 were associated with poor disease-free survival and overall survival in CC patients. In vitro experiments demonstrated that AFAP1-AS1 knockdown significantly inhibited the cell invasive and migration capability in CC cell line HT-29. AFAP1-AS1 knockdown also increased the expression of E-cadherin and ZO-1 while inhibited the expression of Vimentin, MMP9, ZEB1 and β-catenin, suggesting that AFAP1-AS1 is involved in the epithelial-mesenchymal transition (EMT) process of CC. Further studies confirmed that AFAP1-AS1 knockdown also affected the actin-cytokeratin signaling pathway. Thus, AFAP1-AS1 might be a potential novel diagnostic marker and therapeutic target for CC.

Colon cancer (CC) is a common digestive system's cancer that ranks fourth in cancer-associated mortality in the world and has increasing morbidity each year [1, 2]. Although encouraging progress for diagnosing and treating CC has been achieved, the underlying mechanisms of tumor development have yet to be fully elucidated.

Long non-coding RNAs (lncRNAs) are a kind of non-coding RNA longer than 200 nucleotides and lack significant open reading frames (ORFs) [3, 4]. Previous studies show that lncRNAs function in many biological processes, including cell differentiation, proliferation, and apoptosis [5, 6]. Recently, studies have shown that dysregulated lncRNAs also play important roles in human cancers [7-13]. Several lncRNAs are upregulated in CC tissues and cell lines relative to normal samples and therefore serve as oncogenes. BCAR4 promotes tumor growth and metastasis in CC by activating the Wnt/β-catenin signaling pathway [14]. HOTAIR is associated with the epithelial-mesenchymal transition (EMT) in CC and functions as a prognostic marker [15]. HNF1A-AS1 greatly enhances cell metastasis [16]. However, some lncRNAs, such as HOXB-AS3 [17] and CASC7 [18], are down regulated in CC, indicating they may act as tumor suppressers and potential targets for clinical diagnosis, prognosis and therapy.

In this study, we found a candidate CC biomarker, AFAP1-AS1, by analyzing lncRNA gene expression data in the TCGA RNA-Seq and GEO datasets. AFAP1-AS1 was significantly elevated in CC tissues relative to normal tissues. We aimed to determine the expression level and prognostic significance of AFAP1-AS1 in CC as well as investigate the underlying molecular mechanisms.

The sequences of the two siRNAs that targeted AFAP1-AS1 were siRNA1, 5'-GGGCTTCAATTTACAAGCATT-3' and siRNA2, 5'-CCTATCTGGTCAACACGTATT-3'. Sequences of non-target negative controls (NC) were obtained from Life Technologies. The cells were cultured in 6-well plates over night. And then these cells were transfected with either 50 nM of siRNA1 or siRNA2 or NC using Lipofectamine RNAiMAX Reagent (Invitrogen, Breda, The Netherlands) in accordance with the manufacturer's instructions.

The total RNA was extracted using Trizol agent according to the manufacturer's instructions. SYBR_PremixExTaq II kit (Takara, Dalian, China) was used to carry out the reactions. The CFX96 Real-Time PCR Detection System (Bio-Rad, Hercules, CA, USA) was used to measure the relative expression levels of each gene. The gene-specific primers used were as follows: AFAP1-AS1, 5'-AATGGTGGTAGGAGGGAGGA-3' and 5'-CACACAGGGGAATGAAGAGG-3'; E-cadherin, 5'-GAGAACGCATTGCCACATACAC-3' and 5'-AAGAGCACCTTCCATGACAGAC-3'; Vimentin, 5'-TGCCAACCGGAACAACGAT-3' and 5'-AATTCTCTTCCATTTCACGCATC-3'; MMP-9, 5'-AAGGGCGTCGTGGTTCCAACTC-3' and 5'-AGCATTGCCGTCCTGGGTGTAG-3'; ZEB1, 5'-GATGATGAATGCGAGTCAGATGC-3' and 5'-CTGGTCCTCTTCAGGTGCC-3'; β-actin, 5'-TCACCAACTGGGACGACATG-3' and 5'-GTCACCGGAGTCCATCACGAT-3'. β-actin was used as an endogenous control.

We performed wound healing assays to assess the migration capacity of tumor cells as described previously [23-26]. Briefly, after transfection, the cells were seeded into 6-well plates (5×105 cells/well) and incubated for 24 h. When the cell cultures reached 95% confluency, a 10 μl tip was used to create a scratch in the cell monolayer. Images were captured at different time points after scratching (0 h, 24 h and 48 h) by microscopy to measure gap closure after wounding.

Transwell Cell Culture Inserts (BD Biosciences, New Jersey, USA) were used to measure the invasive capacity [27-29]. In brief, HT-29 cells (1×105 cells in 100 μl of 2% FBS medium) were seeded on the top chamber and then placed into 24-well plates. The bottom well contained 800 µl of growth medium with 15% FBS. After the cells were incubated for 36 h at 37°C, the cells on the upper surface were removed, while the cells that invaded through the filter pores were fixed in 4% paraformaldehyde for 30 min and stained with gentian violet. Invaded cells were imaged using a microscope, and the cell number was counted in 5 randomly selected high-power fields.

All the numerical data are expressed as the mean ± standard deviation (SD). Student's t-tests were used to analyze the data. Curve fitting analyses were performed with GraphPad Prism Software (GraphPad Software, San Diego, CA, USA), and the results of the analyses were considered significant if P< 0.05.

LncRNA AFAP1-AS1 is upregulated in CC

We measured the expression level of AFAP1-AS1 in 4 CC cell lines (SW480, SW620, HCT116, and HT-29) by qRT-PCR. Since HT-29 had the highest AFAP1-AS1 expression level (Figure 3A), we selected this cell line for further study. Two siRNAs targeting AFAP1-AS1 were transfected into HT-29 cells. The second siRNA (siRNA2) had a greater knockdown effect as measured by qRT-PCR (Fig. 3B). To elucidate the role of AFAP1-AS1 in CC, siRNA2 or a negative control (NC) siRNA was transfected into HT-29 cells. Migration studies revealed that the gap distance in the siRNA2-treated group was much longer than the NC group, suggesting that the knockdown of AFAP1-AS1 inhibited cell migration ability (Figure 3C & 3D). Transwell matrigel invasion assay was used to assess the effects of AFAP1-AS1 knockdown on cell invasion. As expected, the number of invading cells in the AFAP1-AS1 knockdown group was much lower than the number in the NC group (Figure 3E &3F).

High AFAP1-AS1 is associated with poor prognosis in CC patients. CC patients with high AFAP1-AS1 have shorter overall survival (OS, A) and disease-free survival (DFS, B). Data were obtained from the TCGA-COAD RNA-Seq dataset within the GEPIA database. The Kaplan-Meier method was used to calculate curves. 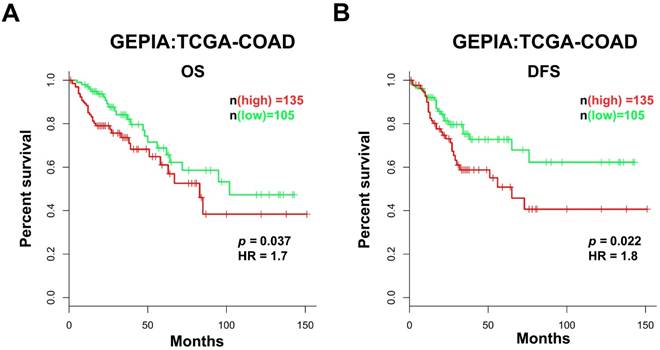 Previous studies have demonstrated that down regulation of AFAP1-AS1 suppressed tumor migration and invasion by regulating EMT-related genes. Future studies should investigate which signaling pathways are involved in tumor progression. In a previous study, we showed that RHOA, RAC2, RAB10 and RAB11A were significantly upregulated, while RHOC, RAB11B and LASP1 were down regulated after silencing AFAP1-AS1 in nasopharyngeal carcinoma cells [30]. We therefore measured these molecules in CC cells. Western blotting analysis showed that CTTN, RHOA and RAB1B were elevated, while MPRIP was lower after silencing AFAP1-AS1 (Figure 4C).

Emerging evidence indicates that lncRNAs play important roles in multiple physiological and pathological processes, including tumor development [31-37]. AFAP1-AS1, also known as LOC84740, is located on chromosome 4p16.1 and acts as an antisense lncRNA regulator of the AFAP1 gene [30]. AFAP1-AS1 was originally identified in esophageal adenocarcinoma [38], is frequently upregulated in CC and serves a vital role in a variety of tumor types, including pancreatic cancer, hepatocellular carcinoma and lung cancer [39-42]. In liver cancer, AFAP1-AS1 is highly expressed and promotes cell growth by activating the RHOA/RAC2 pathway [43].

Previous studies confirmed via qRT-PCR that AFAP1-AS1 was frequently highly expressed in colorectal cancer (CRC) tissues and that AFAP1-AS1 is a potential diagnostic biomarker for CRC patients [44]. In the present study, we collected data from different platforms to determine the expression tendency of AFAP1-AS1 and its prognostic value in CC. Our analysis is consistent with that of previous studies; AFAP1-AS1 was elevated in CC tissues. Our findings also confirmed that AFAP1-AS1 expression was highly correlated with poor prognosis. These findings suggest that AFAP1-AS1 may act as an oncogene in CC. We found that HT-29 cells had a higher expression level of AFAP1-AS1. Therefore, HT-29 cells were used to further explore the role of AFAP1-AS1 in CC. We found AFAP1-AS1 knockdown significantly suppressed cell migration and invasion ability. We also determined that AFAP1-AS1 acts as a tumor promoter. EMT was characterized by cancer cell migration and invasion. E-cadherin suppression is the first step of EMT initiation, resulting in reduced cell adhesion. Our data suggest that AFAP1-AS1 knockdown causes the upregulation of E-cadherin while inhibiting Vimentin, MMP9 and ZEB1 mRNA expression. Furthermore, AFAP1-AS1 knockdown increases E-cadherin and ZO-1 protein levels while decreasing β-catenin, Vimentin, MMP9 and ZEB1. These findings provide evidence for the anti-metastasis action of AFAP1-AS1 silencing.

In conclusion, we found and confirmed that AFAP1-AS1 is upregulated in CC. AFAP1-AS1 knockdown significantly suppressed CC progression by regulating the actin-cytokeratin signaling pathway and EMT-related genes, indicating that AFAP1-AS1 may be a novel therapeutic target for CC.

AFAP1-AS1 knockdown inhibits cell migration and invasion. (A) AFAP1-AS1 expression levels across four CC cell lines were measured by qRT-PCR. (B) Expression levels of AFAP1-AS1 in HT-29 cells were measured by qRT-PCR after transfected with siRNAs targeting AFAP1-AS1 (siRNA1 and siRNA2), or a scrambled negative control (NC). qRT-PCR results indicated that the siRNA2 had the strongest inhibitory effect. (C) Representative images of cells that migrated into the scratched area and (D) the gap distance of each groups at 0 h, 24 h and 48 h. (E) Representative images of invasive cells transfected with NC or with siRNA2. (F) Measurement of the relative number of invaded cells in each group.*P< 0.05, **P < 0.01, ***P < 0.001. 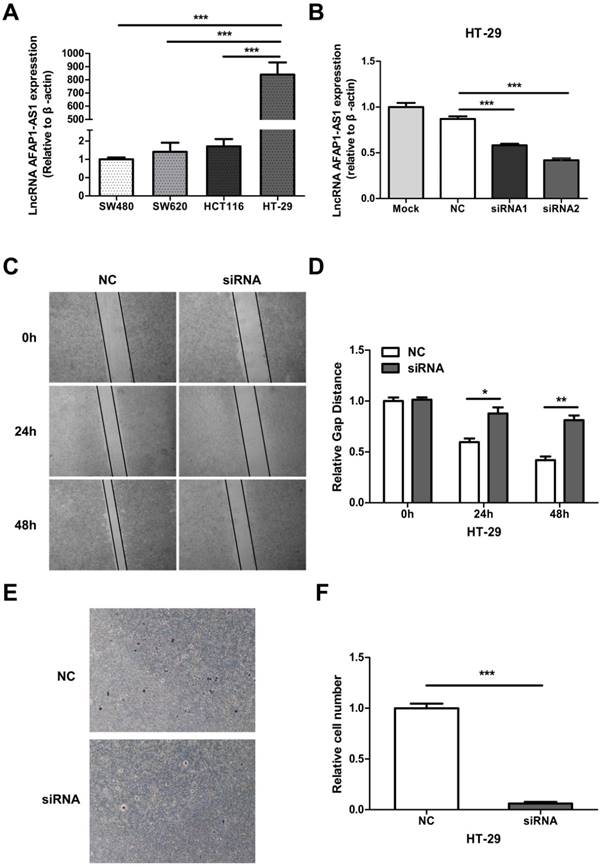 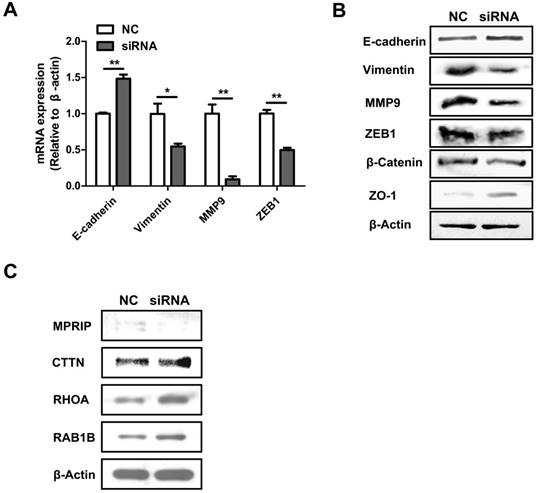