This study is an unbiased genomic screen to obtain functional targets for increased effectiveness of dasatinib in pancreatic cancer. Dasatinib, a multi-targeted tyrosine kinase inhibitor, is used in clinical trials for treatment of pancreatic cancer; however, intrinsic and acquired resistance often occurs. We used a dasatinib-resistant pancreatic cancer cell line SU8686 to screen for synthetic lethality that synergizes with dasatinib using a pooled human shRNA library followed by next generation sequencing. Novel genes were identified which when silenced produced a prominent inhibitory effect with dasatinib against the pancreatic cancer cells. Several of these genes are involved in the regulation of epigenetics, as well as signaling pathways of the FOXO and hedgehog families. Small molecule inhibitors of either histone deacetylases or nuclear exporter had marked inhibitory effect with dasatinib in pancreatic cancers, suggesting their potential therapeutic effectiveness in this deadly cancer.

Pancreatic cancers are increasing in frequency, representing the fourth most common cancer in the United States and globally the seventh most malignancy [1]. Peak incidence of the disease is in the sixth and seventh decades of life. Causes of pancreatic cancer are unknown, but it is associated with chronic pancreatitis and diabetes [2, 3]. Genomic abnormalities include frequent mutations of KRAS, TP53, CDKN2A, and SMAD4 [4-7]. Genetic alteration in a core set of 12 cellular signaling pathways (60-100%) are involved in pancreatic cancer [8]. Pancreatic cancer has a high mortality rate and ninety-five percent of patients die within five years. No biomarkers for early diagnosis are available; and at diagnosis, the disease is usually no longer curable by surgery. Chemotherapy with either gemcitabine or in combination with other drugs (e.g. paclitaxel, erlotinib) has limited activity against this cancer [9, 10]. Multi-targeted kinase inhibitor dasatinib retards growth of human pancreatic adenocarcinoma cells in an orthotopic nude murine model [11] and inhibits metastasis in a murine model of pancreatic ductal adenocarcinoma [12].

We used MISSION LentiPlex Human Pooled shRNA Library SHP001 containing more than 75,000 shRNA constructs targeting 15,000+ human genes (Sigma, St. Louis, MO) (Supplementary Figure 1). At day 0, human pancreatic cancer cell line SU8686 was seeded in 150 mm tissue culture dishes at a density that by the next day the cells were between 30 to 40% confluent. At day 1, the cells were infected with lentivirus for 24 hr. Viral titer of 0.3 MOI (multiplicity of infection) was used to obtain a single viral infection per cell. At day 2, the virus was removed and replaced with regular culture medium. At day 3, cells were incubated under selection with puromycin (5 μg/ml, 48h). At day 5, culture medium containing puromycin was removed and replenished with fresh medium without puromycin. At day 7, cells reached confluence and were passaged at 1:4 for subsequent dasatinib treatment and 1:8 for controls. At day 8, dasatinib (10 ng/ml) was added to the cells. After 5 days of incubation, both control and dasatinib-treated plates reached confluence, and cells were harvested for genomic DNA using QiaAMP DNA micro kit (Qiagen, Valencia, CA). Hairpins from genomic DNA were retrieved with PCR (forward primer: ATCTTGTGGAAAGGACGAAAC; reverse primer: ACCTCGAGACAAATGGGCAGTA) and 114 bp products were purified for deep sequencing with SOLEXA (Illumina, San Diego, CA). Sequencing and data analyses were performed at the Core Facility in National University of Singapore. (Supplementary Figure S2).

For clonal growth on plastic, cells were seeded at a density that resulted in 30-40% confluence in 6-well plates on the following day. For colony formation in soft agar, 3,000 cells were seeded in the top layer of 0.25% agar with a bottom layer of 0.5% agar. After addition of drugs, the plates were incubated for 14 days. Cells were stained with 0.1% crystal violet and photographed. Number of colonies was counted with ImageJ (http://imagej.nih.gov). Data represent the average of two independent experiments each done with triplicate wells. 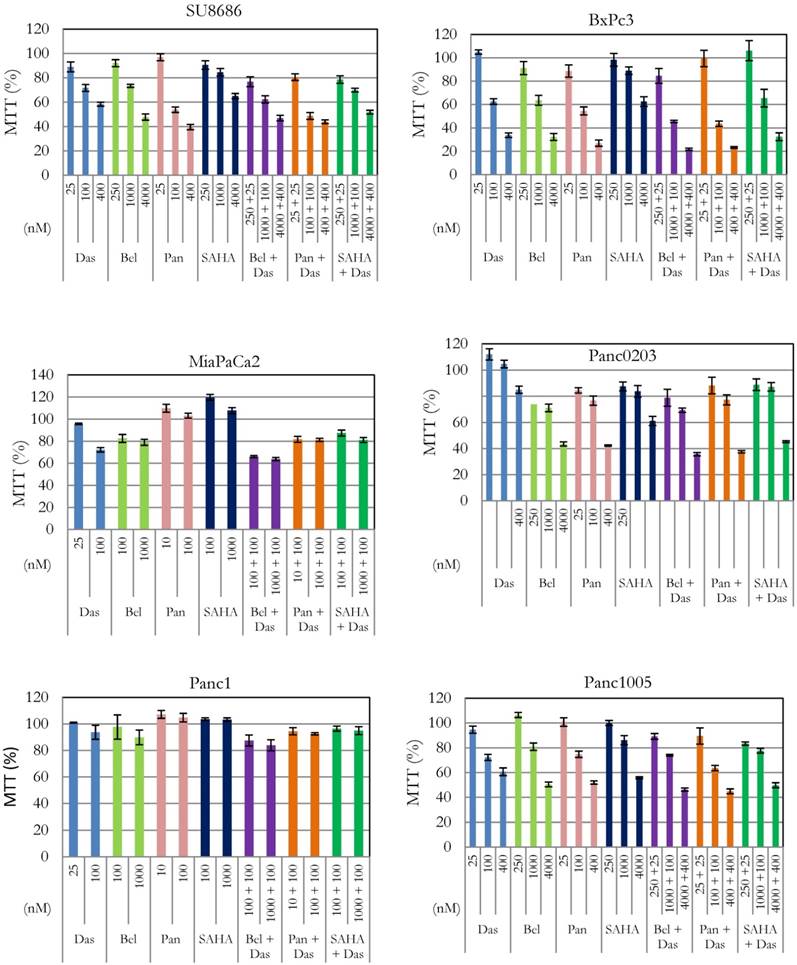 The 410 genes from the primary screen were categorized by PANTHER (protein analysis through evolutionary relationships) classification system. Twelve biological processes were enriched in relation to dasatinib resistance (Supplementary Figure S3). Not surprisingly, “metabolic process” was over-represented (182 genes) since metabolic phenomena related to chemo-resistance is well established. Genes attributed to the “apoptotic process” (16 genes) and “response to stimulus” (46 genes) were likewise represented. Pathway analysis of these 410 genes using PID (pathway interaction database) indicated multiple pathways were related to dasatinib-resistance (Table 1). Notably XPO1 (nuclear protein exporter) was involved in several pathways including signaling through FOXO, hedgehog, and canonical NF-κB as well as signaling events mediated by HDAC class 1 (Table 1). XPO1 and other key components of these pathways may be targeted for potential synergistic effects with dasatinib.

Silencin the HDAC pathway enhanced dasatinib activity. In our previous studies, we have shown anti-proliferative activity of HDAC inhibitors (belinostat, panobinostat, vorinostat) against pancreatic cancer cells [16, 17]. Effect of interaction between these inhibitors and dasatinib was examined in six pancreatic cancer cell lines (SU8686, Panc0203, Panc1005, BxPc3, MiaPaCa2, Panc1) (Figure 1). Cell proliferation was synergistically inhibited in the presence of dasatinib at low concentrations (25 or 100 nM) and each of the three HDAC inhibitors against SU8686, Panc1005, Panc0203, BxPc3, MiaPaCa2, and Panc1 (Table 2). These results suggested that concomitant inhibition of HDAC signaling may be an effective complement to dasatinib in pancreatic cancers.

Analysis of drug interaction between dasatinib and HDAC inhibitors

Effect of siRNA-mediated gene silencing of either MAX or XPO1 on human pancreatic cancer cell proliferation and dasatinib sensitivity. Six human pancreatic cancer cell lines (SU8686, MiaPaCa2, Panc1, BxPc3, Panc0203, Panc1005) were transfected with siRNAs against either MAX or XPO1 (siMAX or siXPO1) and treated with dastainib (10-9 - 10-6 M). A. Without dasatinib treatment, proliferation of siMAX-transfected and siXPO1-transfected cells was compared to siCON-transfected cells by MTT assays. B. siRNA transfected cells were treated with dasatinib (10-9 - 10-6 M), and cell viability was measure by MTT assays. For each cell line, cell growth was normalized to itself without dasatinib treatment. *Values of IC50 were extrapolated from dose curves using Graphpad Prism software. 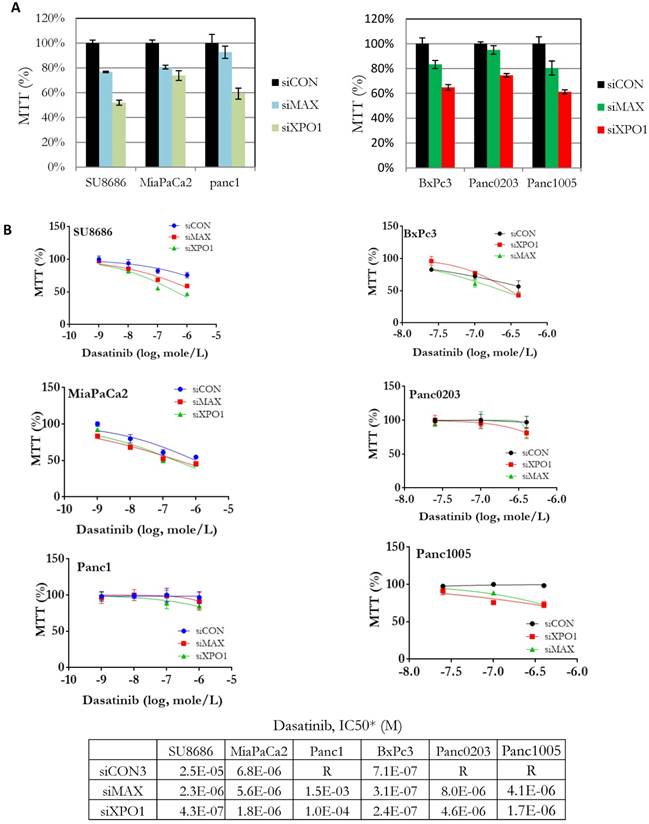 Incubation of pancreatic cancer cells (MiaPaCa2, Panc1) with KPT-330 (selinexor) (10 μM, 36 hr) decreased levels of XPO1, increased the apoptotic-related proteins BIM and BAX, but did not change the expression of the anti-apoptotic proteins BCL-2 or BCL-XL (Figure 4A). Protein levels of proliferation-related proteins, MYC and SURVIVIN, also decreased (Figure 4A). Because dasatinib is a multi-target ATP-competitive kinase inhibitor, we investigated the phosphorylation levels of 4 kinases (pSRC, pFAK, pERK, pAKT) since these 4 kinases are highly activated in human pancreatic cancer. Single agent dasatinib suppressed pSRC but KPT-330 did not. Combination of both dasatinib and KPT-330 slightly enhanced the suppression of pSRC (Figure 4B). Dasatinib did not inhibit pFAK but KPT-330 did. Combination treatment of dasatinib and KPT-330 showed enhanced inhibition of pFAK (Figure 4B). KPT-330 down-regulated pAKT and combined therapy prominently enhanced the down-regulation (Figure 4B). Either dasatinib or KPT-330 alone suppressed pERK1/2 and their combination enhanced suppression of pERK1 (Figure 4B). Taken together, combination of KPT-330 plus dasatinib enhanced de-phosporylation of the SRC, AKT, ERK, and FAK kinases. 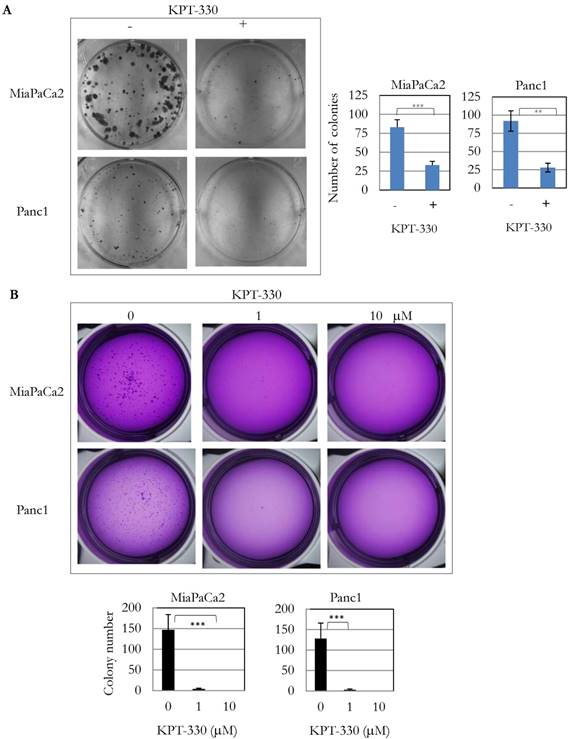 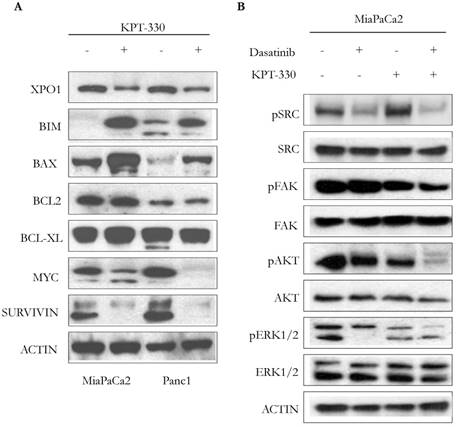 Although dasatininb has some efficacy against pancreatic cancer, the majority of patients are either refractory to this therapy or quickly acquire resistance during treatment. Thus pancreatic cancer remains a clinical challenge if it cannot be cured by surgery. Using a large shRNA library screen and next-generation sequencing as a platform, 729 depleted shRNAs corresponding to 410 genes were identified in the dasatinib treated cells. Pathway analysis suggested targeting mTOR signaling (p = 0.000126), hedgehog signaling (p = 0.001), FOXO family (p = 0.001), or canonical NF-κB pathway (p = 0.049) may prominently inhibit pancreatic cancer cell proliferation when combined with dasatinib. We particularly focused on the synthetic lethal interaction between dasatinib and an inhibitor of either HDAC or XPO1.

One component required for signaling by HDACs as well as FOXO and canonical NF-κB involves transport across the nuclear membrane through XPO1 [20, 21]. Leptomycin B, an inhibitor for XPO1, was found to have anti-cancer activity but caused too much systemic toxicity [22]. This prompted the synthesis and development of a series of selective inhibitors of nuclear export (SINE) [KPT-185, -276, and -330] which have anti-proliferative activity against a wide variety of cancers including ovarian cancer [23], hepatocellular carcinoma [24], lung cancer [25], and several haematological malignancies [26]. KPT-330 (selinexor) has been and is used in several clinical trials in solid and hematopoietic malignancies including acute myeloid leukemia [27, 28], multiple myeloma [29], chronic myelogenous leukemia, and non-Hodgkin lymphoma [30] . Many key proteins (e.g. FOXOs, NPM, and p53) are aberrantly localized or altered in their abundance by this family of inhibitors [31-33]. Functionally, we showed that pancreatic cancer cells were sensitive to KPT-185, -276, and -330; and furthermore, the anticancer potency of KPT-330 (selinexor) was enhanced in hypoxic conditions (the normal condition of pancreatic cancer cells) (Supplementary Figure S7). KPT-330 (selinexor) suppressed colony formation of pancreatic cancer cells in vitro as well as those growing as xenografts in immuodeficient mice corroborating a previous study [21]. More importantly, KPT-330 (selinexor) over a wide range of concentrations was synergistic with dasatinib, the multi-targeted kinase inhibitor in their anti-proliferative activity against pancreatic cancer cells both in vitro and in a xenograft model. KPT-330 also synergized with gemcitabine in human pancreatic cancer cell lines (Supplementary Figure S8), corroborating a previous study [34]. In this study, KPT-330 up-regulated apoptotic molecules and down-regulated anti-apoptotic molecules in pancreatic cancer cells. The combination of dasatinib plus KPT-330 markedly decreased the phosphorylation of SRC, FAK, ARK, and ERK kinases.

Growth of pancreatic cancer cells in the presence of the combination of the XPO1 inhibitor (KPT-330) with dasatinib. A. MTT assays of three pancreatic cancer cell lines (SU8686, MiaPaCa2, Panc1) treated with either single drug (KPT-330 or dasatinib) or a combination of both. Cell viability was normalized to control without drug treatment. Das: dasatinib. B. Combination index (CI) was calculated for the drug combinations with Calcusyn as described in Materials and Methods. CI value > 1 (antagonist), = 1 (additive effect), < 1 (synergism). 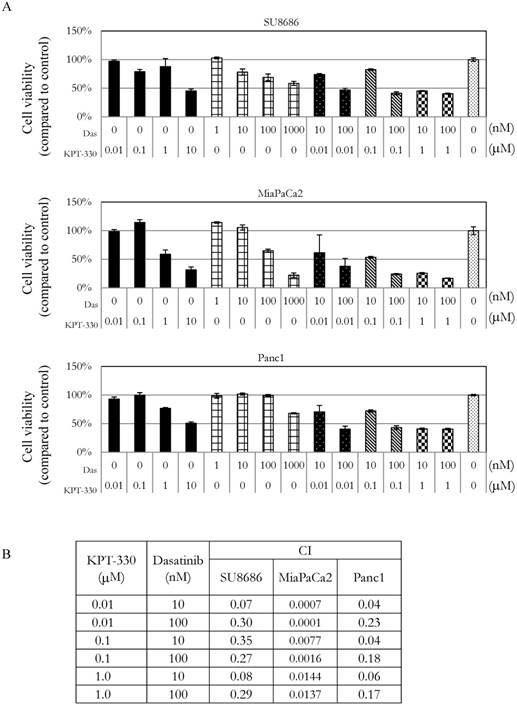 KPT-330 was synergistic with dasatinib in the inhibition of pancreatic tumor growth in vivo. MiaPaCa2 cells were injected subcutaneously in immunodeficient mice. After the tumors became palpable, mice were treated with KPT-330 (10 mg/kg by oral gavage), dasatinib (10 mg/kg intraperitoneally), combination of KPT-330 and dasatinib, or diluent control, as described in Materials and Methods. A. At the end of the experiments, tumors were weighed. Student t-test was used to compare the difference among the tumors. ns: nonsignificant; *: p < 0.05; **: p < 0.01. B. Immunohistochemical staining with Ki-67 and phosphorylated ERK (pERK) on xenografts. Image magnification, 20x; scale bar, 100 μm. Representative slides are shown. 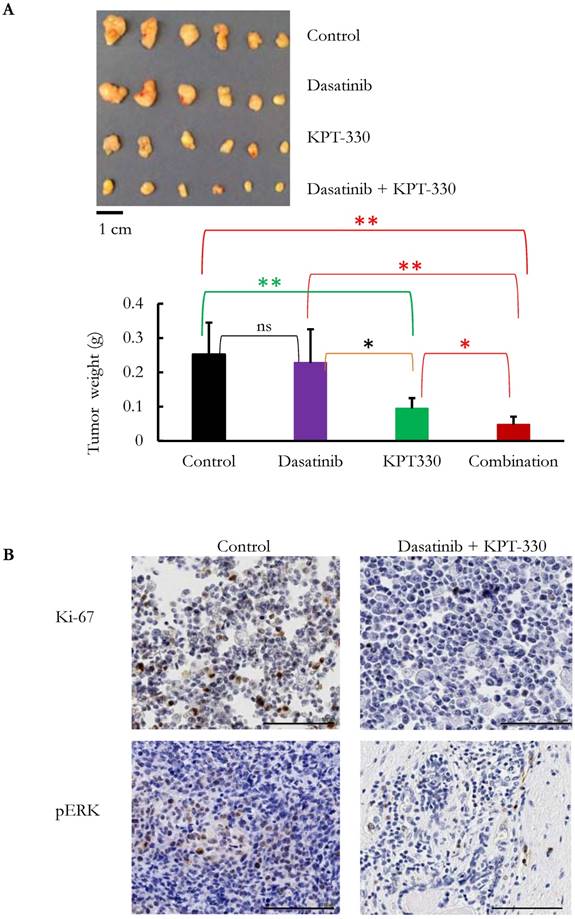 Incidence of pancreatic cancer is increasing globally and an efficient non-surgical therapeutic treatment of is urgently needed. Phase I study of dasatinib when combined with gemcitabine showed partial response in 25% of patients [35] and phase II study indicates dasatinib does not have clinical activity as a single agent in metastatic pancreatic cancer [36]. Recent pre-clinical studies suggest targeting TGFβ together with dasatinib may be a novel therapeutic approach for pancreatic cancer [37, 38]. In this study, we identified two pathways that mediated synthetic lethality with dasatinib. The first is HDAC inhibitors which have been approved by the FDA for other cancers. The second is KPT-330 (selinexor) which blocks protein and RNA transport from the nucleus. The key anti-cancer targets of the drug are probably multiple; we showed that two pro-apoptotic proteins (BAX, BIM) markedly increased, while anti-apoptotic protein (SURVIVIN) as well as the pro-growth protein (MYC) decreased in the pancreatic cancer cells. In summary, either HDAC inhibitors or KPT-330 (selinexor) combined with dasatinib appeared should be explored in surgically failed pancreatic cancers.

Cell lines were cultured with three XPO1 inhibitors for 72 and cell viability was measured by MTT assay. *IC50s were extrapolated from MTT data using Graphpad Prism software as described in Materials and Methods. R: resistant.

This work was funded by the Singapore Ministry of Health's National Medical Research Council (NMRC) under its Singapore Translational Research (STaR) Investigator Award to H. Phillip Koeffler, the National Research Foundation Singapore and the Singapore Ministry of Education under its Research Centres of Excellence initiative. This study was partially supported by a generous donation from the Melamed family and the Samuel Oschin Comprehensive Cancer Institute (SOCCI) at Cedars-Sinai Medical Center through the Eleanor and Glenn Padnick Discovery Fund in Cellular Therapy Project".