Background: PDZ-binding kinase/T-LAK cell-originated protein kinase (PBK/TOPK) plays a critical role in tumorigenesis and cancer progression. However, the prognostic roles in cancer patients are inconsistent or even controversial. Therefore, we performed a meta-analysis to investigate the prognostic value of PBK/TOPK in cancers.

Conclusions: The findings suggest that PBK/TOPK protein expression might serve as a prognostic tumor marker in cancers.

PBK (PDZ-binding kinase), also known as T-lymphokine-activated killer cell-originated protein kinase (TOPK), is a 322 amino-acid and mitogen- activated serine/threonine protein kinase [1-2]. PBK/TOPK protein is generally difficult to detect in normal tissues but frequently elevated in cancer tissues, such as breast cancer, lymphoma and bladder cancer [3-5]. Furthermore, PBK/TOPK has been reported to play vital roles in inflammation, cell apoptosis, and cell-cycle regulation and high expression of PBK/TOPK contributes to tumor growth, proliferation, and metastasis [6-9]. Accumulating evidence has reported that PBK/TOPK protein expression was correlated with clinical outcomes in various solid cancers, such as colorectal cancer, cholangiocarcinoma and lung cancer [10-12]. However, the potential prognostic value of PBK/TOPK in human solid tumors is inconsistent and even contradictory. For example, Hayashi et al [13] reported that over-expression of TOPK protein was significantly related with poor prognosis in glioma, which was consistent with the results conducted in lung adenocarcinoma by Wei et al [12], but there was no significant association between PBK/TOPK protein expression and OS in prostate, gastric and epithelial ovarian cancer [14-16]. Conversely, PBK/ TOPK up-regulation was reported to be correlated with longer overall survival in cholangiocarcinoma and oral squamous cell carcinoma [10,17].

To date, there is no study to comprehensively assess the correlation between PBK/TOPK protein expression and prognosis in cancer patients. And considering the limited number of individual study and varied results. Herein, we conducted the meta-analysis with published data to clarify the influence of high PBK/TOPK expression and its impact on the outcomes of different cancers as well as provide an overview of the current roles of PBK/TOPK in tumor prognosis and as a promising therapeutic target.

To evaluate the quality of studies, the Newcastle- Ottawa Scale (NOS) was applied. We assigned the studies of high quality a scored ≥6.

In the meta-analysis, the pooled HRs and their 95% CIs were calculated to investigate the impact of PBK/TOPK expression on the survival of patients using STATA (Version 11.0; StataCorp, College Station, TX). I2 test and Q test were used to assess heterogeneity among the studies, Phet<0.10 and/or I2 > 50% indicates obvious heterogeneity among studies, and then the random effect model was used for significant heterogeneity. Otherwise, a fixed-effect model was applied. Egger's test and Begg's test were conducted to assess potential publication bias. Sensitivity analysis was carried out to explore the stability of the combined results. A p-value < 0.05 was considered as statistically significant.

The study selection procedure is outlined in Figure 1. According to the selection criteria, the potential relevant full-texts were reviewed and further examined. Finally, 20 [10-29] eligible studies which fulfilled all inclusion criteria were selected into this systematic review and meta-analysis.

A total of 20 studies with 3470 patients reported the relationship between PBK/TOPK protein and OS in various cancers. The random-effects model was applied for large heterogeneity existed (I2 = 71.7%; Phet =0.000). As shown in Figure 2, the overall results showed that high PBK/TOPK expression was significantly correlated with poorer OS in various cancers (HR: 1.69, 95% CI: 1.33-2.04). 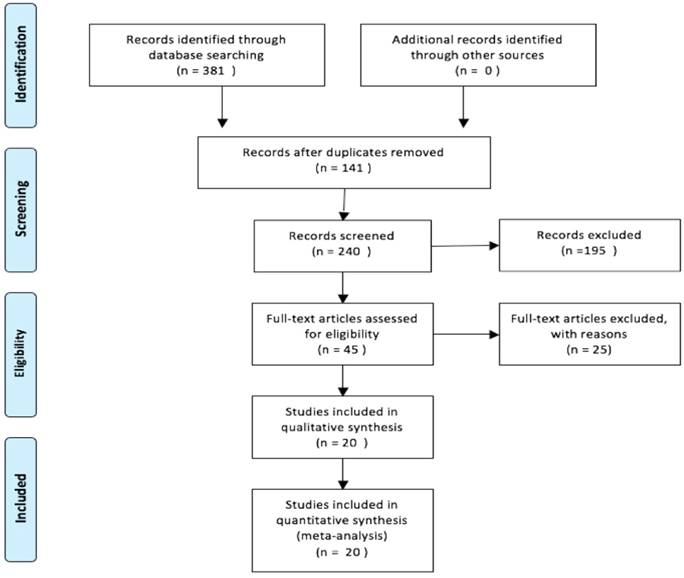 Forest plots of PBK/TOPK protein and OS in various cancers. 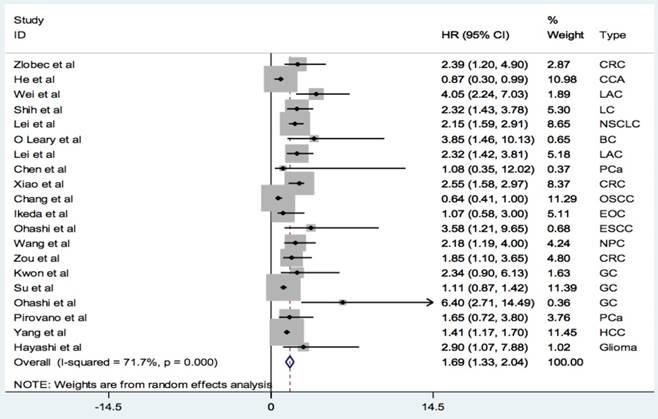 Characteristics of eligible studies in this meta-analysis.

The pooled HR for secondary outcomes in cancer patients are presented in Table 3.

The results (Figure 5) showed that the exclusion of any individual study did not change the statistical significance, suggesting the robustness of our results. 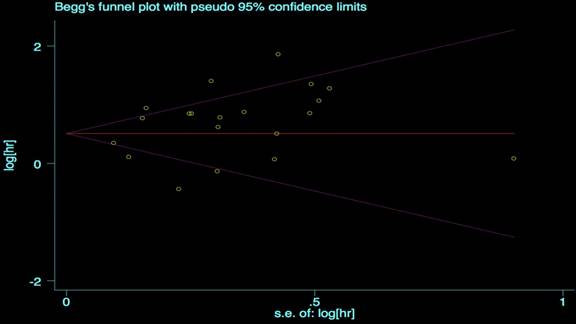 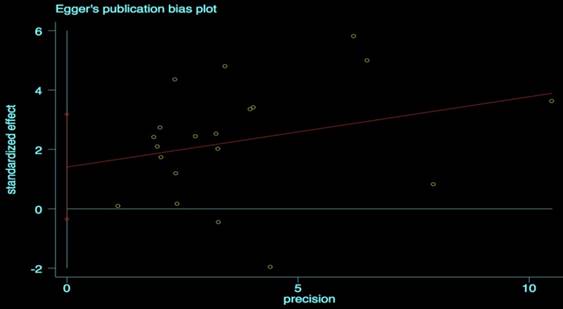 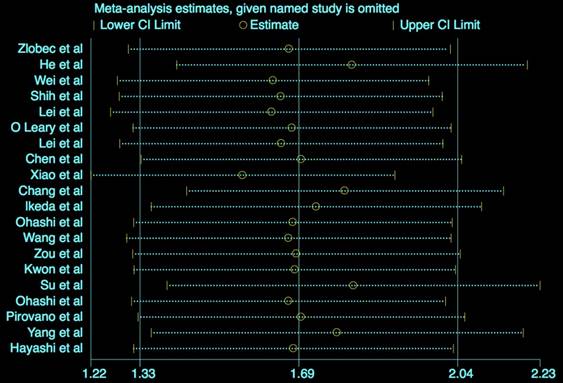 Meta-analysis results of the relationship between PBK/TOPK protein and OS.

Analyses of secondary outcomes for PBK/TOPK protein in tumors.

Since the prognosis potential of PBK/TOPK protein in human solid cancers is inconsistent and debatable, a quantitative meta-analysis is employed in our study. To our knowledge, this is the first meta-analysis to comprehensively evaluate the effect of PBK/TOPK protein level on prognosis in various tumors. By searching against several online databases, a total of 20 observational studies were ultimately included in our work altogether 3470 subjects, containing 12 different cancer types. After analyzing the data extracted from those eligible articles, we revealed that PBK/TOPK protein expression level was associated with clinical outcomes in solid tumors.

The pooled HR results suggested that a high expression level of PBK/TOPK protein was significantly associated with poor OS (HR: 1.69, 95% CI: 1.33-2.04) in human cancers. According to different cancer types, we found the prognostic value of PBK/TOPK in LC (HR=2.30, 95% CI: 1.79-2.81) and CRC (HR=2.39, 95% CI: 1.81-2.97). But no significant differences were found between PBK/TOPK expression and OS in prostate and gastric cancer, this might be for the relatively small number of studies and needed to be explored by future larger studies. As for different ethnicities, the current findings showed that PBK/TOPK expression might be a significant prognostic predictor in Asian patients but not in Caucasian populations, the findings of different ethnic background should be confirmed by future multi-center researches. In addition, we also found that PBK/TOPK protein might be an independent predictor for OS in human cancers (HR=1.88, 95% CI:1.42-2.34). Meanwhile, the relationships between PBK/TOPK protein level and secondary outcomes were also investigated, and PBK/TOPK was found to be a useful prognostic factor for RFS (HR: 1.63, 95% CI: 1.02-2.24) and DFS (HR: 1.69, 95% CI: 1.16-2.23), but not significant for PFS (HR: 2.56, 95% CI: 0.80-4.32). Generally, PBK/TOPK exhibited the potential clinical utility as a candidate molecular marker in human malignancies.

This present study showed that PBK/TOPK expression was associated with patients' clinical outcomes. A number of researches have studied the roles of PBK/TOPK in cancer development, PBK/TOPK acts as an oncogene in multiple cancers and contributes to tumor progression [8, 21, 23, 30-31]. PBK/TOPK is reported to be highly expressed in cancer tissues and cell lines, and high PBK/TOPK expression tends to indicate higher biological malignant aggressiveness [19, 32]. TOPK knockdown could significantly inhibit tumor growth, invasion and metastasis in vitro and in vivo, conversely, PBK up-regulation displays multiple tumorigenic properties, it could promote cell growth, metastasis and enhance tumor transformation [23-26, 30-31]. PBK/TOPK also correlates with drug response and tumor resistance and showed to be the valid target for antineoplastic kinase inhibitors and serves as a potential therapeutic target for various cancers, such as CRC [33-36], lung cancer [37-38], breast cancer [39] and prostate cancer [40-41].

Nevertheless, there are several limitations in our study. First, we only included the studies published in English or Chinese, and most of the studies included came from the Asian countries. Second, the total sample size was not sufficient enough and all enrolled were retrospective studies. Third, the prognostic potentials of PBK/TOPK protein in other special types of cancers were needed for further investingation. Fourth, there was obvious heterogeneity for OS. Finally, the definition of PBK/TOPK protein overexpression varied in different studies.

In summary, the current meta-analysis indicates that elevated PBK/TOPK protein expression is correlated with poor cancer prognosis, and PBK/TOPK protein might be a promising candidate to predicate the cancer survival. If replicated in future larger-scale, multicenter prospective studies, this finding may support the clinical value of PBK/TOPK as a biomarker in tumors.