Deregulated Wnt signaling initiates most cases of colorectal cancer (CRC). Butyrate, a product of dietary fiber, hyperactivates Wnt signaling, resulting in induction of CRC cell apoptosis, which may in part explain the protective action of fiber. Nonsense mediated decay (NMD) of mRNAs containing premature stop codons (PTCs) affects tumorigenesis and upregulates Wnt signaling in human embryonic stem cells. However, it is unknown how NMD affects Wnt activity in CRC cells that exhibit constitutively activated Wnt signaling. We hypothesize that expression of genes that contain PTCs modulates Wnt signaling and response to butyrate in CRC cells. Amlexanox is a clinically utilized anti-allergic and anti-inflammatory drug that inhibits NMD and promotes PTC read-through. Therefore, Amlexanox is a relevant agent for assessing the role of NMD and PTC read-through in the response of CRC cells to butyrate. To test our hypothesis, we treated HCT-116 CRC cells with Amlexanox and determined effects on Wnt signaling levels, apoptosis, and response to butyrate. Amlexanox enhanced basal Wnt signaling levels; however, it repressed butyrate-induced Wnt signaling hyperactivation and suppressed apoptosis. To evaluate the contribution of NMD and altered expression of PTC-containing genes to these effects, we upregulated NMD by overexpression of up-frameshift protein 1 (UPF1), and observed effects opposite to these of Amlexanox (i.e., Wnt signaling hyperactivation by butyrate was enhanced and levels of apoptosis were increased). Our results support the possibility that altered expression of PTC-containing genes affects butyrate sensitivity of CRC cells.

Deregulated Wnt signaling is a key feature of most CRCs. The preventive activity of dietary fiber against CRC is associated with its fermentation product, the histone deacetylase inhibitor (HDACi) butyrate [9-15], which induces CRC cell apoptosis in part by hyperactivating Wnt signaling [11-18]. Wnt activity can be exogenously stimulated in human embryonic stem cells, and in such cells, NMD upregulates Wnt signaling and the expression of genes targeted by the pathway [19]. However, it is unknown how NMD affects Wnt activity in CRC cells that exhibit constitutively activated Wnt signaling; for example, NMD may influence the ability of butyrate to hyperactive Wnt signaling and modulate CRC cell apoptosis.

Certain reagents promote PTC read-through, and are selective for PTCs, not affecting wild-type termination codons [20-25]. However, optimized production of functional protein from PTC-containing transcripts should combine PTC read-through with NMD inhibition, which would increase the levels of PTC-containing mRNAs subject to read-through translation. Amlexanox, a clinically relevant anti-allergic and anti-inflammatory drug, both promotes PTC read-through and suppresses NMD [21]. We evaluated how Amlexanox influences Wnt signaling and apoptosis in the MSI+ HCT-116 CRC cell line, in the presence and absence of a physiologically relevant concentration of butyrate. To validate our results, we determined whether stimulation of NMD, and decreased expression of PTC-containing genes, achieved through overexpression of UPF1, exhibited effects on Wnt signaling and apoptosis opposite to those of Amlexanox.

Amlexanox, butyrate, and NMDI-14 were from Sigma; Ataluren was from Selleckchem. HCT-116 cells were from Cancer Research UK. NMD vectors were from Dr. Andreas Kulozik, TOP/FOP luciferase reporters were from Dr. Hans Clevers, and pRLTK was from Promega. Control and Rent1 (UPF1) CRISPR activation vectors were from Santa Cruz Biotechnology. Transfection and luciferase assays were conducted as previously described [11-18]. Stable transfections were selected with 200 μg/ml hygromycin, 20 μg/ml blasticidin, and 5 μg/ml puromycin; selective agents were from Santa Cruz Biotechnology. Description of the TOPFlash/FOPFlash system and UPF1 CRISPR is in Supplementary Information.

Western blot and caspase 3/7 assays were performed as previously described [11-18]. Antibodies to CBP, p300, and Rent1 (UPF1) were from Santa Cruz. Actin antibody was from Sigma. Band images were adjusted for brightness and contrast to enhance visualization.

NMD can be measured by a beta-globin-Renilla luciferase NMD reporter. Amlexanox is capable of both NMD inhibition and PTC read-through, and this drug is already used in the clinic for its anti-allergic and anti-inflammatory properties [21]. We therefore determined the optimal concentration of this agent for HCT-116 cells.

Titration of Amlexanox determined that 100 μM and 150 μM were most effective (data not shown); 100 μM was subsequently used for all experiments. In HCT-116 cells, 100 μM Amlexanox resulted in a two-fold increase in expression (P < 0.002) from the NMD (PTC) reporter vector compared to control (Fig. 1).

Amlexanox stimulates expression from a NMD reporter vector. HCT-116 CRC cells were cotransfected with a wild-type or NMD (PTC) reporter vector and a control vector for normalization, and were treated with 100 µM Amlexanox (AM100) or mock treated (Ctl) for 48 hr. Cells were assayed for luciferase expression, measuring normalized readings of the NMD (PTC) reporter values divided by those of the wild-type reporter. Data from three independent experiments. Bars, SDs. 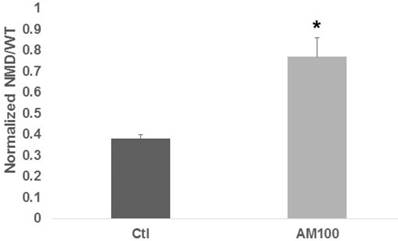 Both basal Wnt activity and the fold upregulation of Wnt activity by butyrate were affected by Amlexanox (Fig. 2A). Amlexanox treatment enhanced basal Wnt activity (Fig. 2B) by 1.9-fold (P < 0.008) and the fold-upregulation of Wnt by butyrate in the presence of Amlexanox (Fig. 2C) was 55% of that observed in mock-treated cells (P < 0.02). Wnt signaling hyperactivation causally correlates to CRC cell apoptosis [10-17]. We observed the expected butyrate-induced upregulation of apoptosis (3.2-fold, P < 0.001), as measured by caspase 3/7 activity, in HCT-116 cells not exposed to Amlexanox (Fig. 2D); however, treatment with Amlexanox completely abrogated caspase 3/7 activity. Differences in caspase activity between control and Amlexanox treated cells were statistically significant (P < 0.001), both in the presence and absence of butyrate.

CBP and p300 are Wnt signaling coactivators that influence response to butyrate in CRC cells [13-15,18]. HCT-116 cells exhibit hemizygous expression of p300; the expressed allele produces a PTC-containing mRNA that partially escapes NMD because the PTC is in the last exon, producing a truncated but functional protein [26-29]. A fraction of HCT-116 cells also exhibit a heterozygous truncating mutation of CBP [27]. Considering the role of CBP and p300 in the response to butyrate and the presence of PTCs in these genes, we evaluated whether Amlexanox affects the levels of these factors in HCT-116 cells. However, no differences in the expression of CBP and p300 were observed (Fig. S1).

Amlexanox affects butyrate-modulated Wnt signaling and apoptosis of CRC cells. (A) Wnt signaling. HCT-116 cells transfected with the TOPFLASH or FOPFLASH Wnt signaling reporters and pRLTK normalization vector. Cells were treated with 100 µM Amlexanox (AM100) or mock-treated (Ctl) for 24 hr, and then mock-treated or treated with 100 µM Amlexanox (AM100) and/or 5 mM butyrate [labeled as B] and (AM100B) for a further 24 hr. (B) The basal Wnt activity from (A) is shown to better visualize differences between Ctl and AM100. (C) The fold up-regulation of Wnt activity after exposure to butyrate based upon the data in (A). (D) Apoptosis assays were performed as previously described [11-15]; cells were treated as in (A). Data from three independent experiments. Bars, SDs. 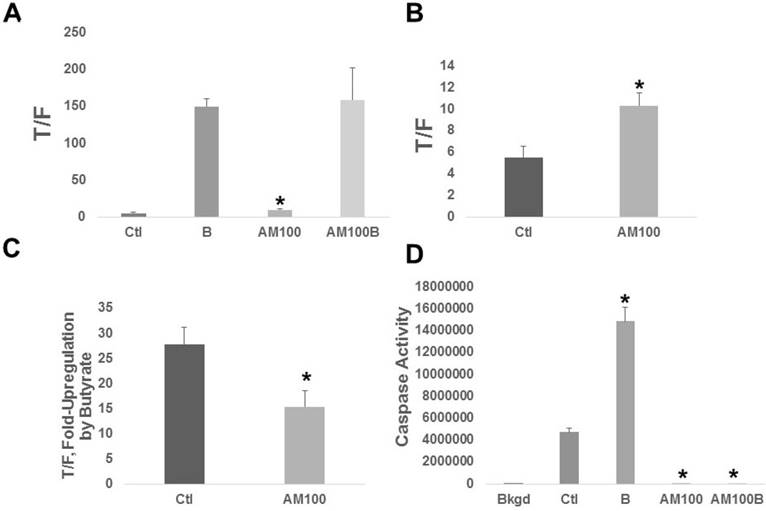 Upregulation of UPF1 in HCT-116 cells. (A) Representative Western blot showing expression of UPF1, CBP, and p300. (B) NMD assayed by the reporter system as in Fig. 1. Data are from nine independent experiments. (C) Wnt signaling assayed as in Fig. 2. (D) The fold up-regulation of Wnt activity after exposure to butyrate from the data of (C). (E) Apoptosis assays were performed as previously described [11-15]. For (C-E), data from three independent experiments are shown. Bars, SDs 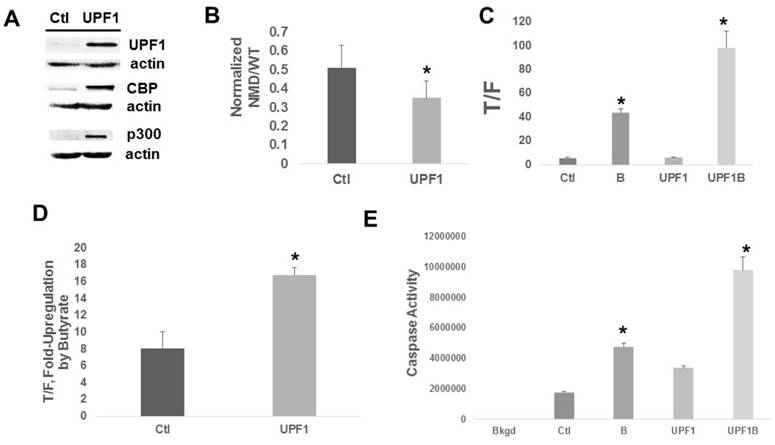 To further evaluate NMD inhibition and PTC read-through in the anti-apoptotic effects of Amlexanox, we investigated a specific inhibitor of NMD, NMDI-14 [31]; a specific read-through activator, Ataluren [21-24]; and the combination of these agents. Unexpectedly, treatment with NMDI-14 (alone or with Ataluren) potentiated NMD in HCT-116 cells as demonstrated by decreased expression from the reporter (Fig. S2A). The apoptotic data (Fig. S2B) suggest that the suppression of apoptosis observed with Amlexanox is likely due to its PTC read-through activity, since this anti-apoptotic effect was replicated by Ataluren. Considering this finding, we evaluated the effect of Ataluren on basal and butyrate-induced Wnt activity (Fig. S2C). Ataluren treatment resulted in slight suppression (P < 0.005) of basal Wnt activity (Fig. S2C,D), a greater than two-fold decrease (P < 0.005) in the levels of butyrate-induced Wnt activity (Fig. S2C), and a modest inhibition of the fold-induction of Wnt activity by butyrate (P = 0.053) (Fig. S2C,E).

Amlexanox treatment did not alter expression of CBP and p300, which mediate effects of butyrate on Wnt signaling [11,13,14]. Possibly, Amlexanox-mediated modulation of Wnt activity is due to effects on the expression of other factors and/or on the binding-association of factors (e.g., beta-catenin with CBP and p300). NMD also affects a fraction of mRNAs that encode functional proteins; up to 5-10% of the human transcriptome can be regulated by NMD [30]. Therefore, altered NMD activity could influence the expression of genes involved in modulating Wnt signaling and response to butyrate.

Enhancing NMD (i.e., suppressing expression of PTC-containing genes) through UPF1 overexpression resulted in the opposite effect on butyrate-mediated Wnt signaling hyperactivation compared to Amlexanox (Fig. 2 versus Fig. 3). However, despite effects on Wnt signaling, overexpression of UPF1 did not affect the fold-change of apoptotic activity in butyrate-treated cells. Considering that CRC cell apoptosis has both Wnt-independent and Wnt-dependent components, one possibility is that modulation of NMD affects the Wnt-independent component of apoptosis. An alternative explanation is that Wnt signaling hyperactivation in control-transfected cells is already optimal for maximal Wnt-dependent apoptosis, and therefore higher levels of Wnt activity may not increase apoptosis further. These data suggest that enhanced expression of PTC-containing transcripts modulates CRC cell apoptosis, with possible clinical implications.

Whereas Amlexanox and UPF1 overexpression had opposite effects on apoptosis and Wnt signaling in butyrate-treated HCT-116 cells, we observed that the increase in basal Wnt activity by Amlexanox was not reciprocated by a suppression of basal Wnt activity in UPF1-overexpressing cells. In addition, Amlexanox did not affect CBP and p300 levels; whereas, UPF1 did so. Therefore, Amlexanox and UPF1 may exert effects on cell physiology independent of NMD and may have Wnt-independent and Wnt-dependent effects. However, the data of Figs. 2 and 3 indicate that altered expression of PTC-containing genes plays a role in the effects of Amlexanox and UPF1 in HCT-116 cells. In addition, the data obtained with Ataluren (Fig. S2B) suggest that it is the read-through component of Amlexanox activity that is most responsible for suppressed apoptosis. Further, the Wnt activity data (Figs. 2, S2) suggest that the effects of these agents on HCT-116 cell apoptosis may be Wnt-independent. Finally, the comparison of the data from Fig. 1 to that of Fig. S2A strongly suggests that optimal expression from PTC-containing genes, as modeled by the NMD reporter, requires both NMD suppression and read-through activation.

Our findings indicate that Amlexanox may interfere with the preventive activity of butyrate. However, the maximal serum concentration of Amlexanox in clinical use is two orders of magnitude lower than that in our study [32]. The long-term effects of continuous low dosage Amlexanox exposure on colonic physiology requires further investigation. Discussion on our findings in relation to the work of El-Bchiri et al. [6] and on the activity of Amlexanox as an HDACi [33] is included in Supplementary Information, as is the discussion of the NMDI-14 and Ataluren experiments.

This work was supported by funding from Geisinger Commonwealth School of Medicine. We acknowledge Drs. Kulozik and Clevers for supplying vectors.