Introduction: Colon cancer with different sidedness (right vs. left) and histology (mucinous vs. non-mucinous) may represent different disease entities. We investigated whether the prognostic values of sidedness and histology differed according to each other.

Materials and Methods: We analyzed 81342 patients with stage II-IV colon cancer from the Surveillance, Epidemiology, and End Results database between 2004 and 2012. Patients were divided into four subgroups on the basis of sidedness and histology: non-mucinous right-sided, non-mucinous left-sided, mucinous right-sided, and mucinous left-sided subgroups. Among each tumor stage, median overall survival (mOS) was compared between these subgroups after inverse probability propensity score weighting to handle confounding factors.

Conclusions: In stage III/IV colon cancer, the prognostic value of sidedness differed according to histology, and vice versa. By contrast, neither should be considered in risk stratification for stage II colon cancer.

Colorectal cancer is one of the most common malignancies and among the leading causes of cancer-related deaths worldwide. [1] Researchers have recently focused on analyzing the diversity of molecular profiles within the large intestine; [2] there is also renewed interest in clinicopathologic features as prognostic and predictive indicators, such as side (i.e., right vs. left) of the primary tumor [3] and histologic type (i.e., mucinous vs. non-mucinous). [4]

Previous studies have shown that compared to patients with left-sided colon cancer (LSCC), those with right-sided colon cancer (RSCC) tend to be older and of the female gender, and have poorly differentiated and advanced stage tumors. [5-7] Additionally, RSCC exhibits a different molecular profile from LSCC. [8-10] However, data comparing prognosis between RSCC and LSCC are conflicting, particularly when patients are stratified by tumor stage. [3, 6, 7, 11, 12]

Mucinous adenocarcinoma (MAC) is a tumor comprising more than 50% extracellular mucin. [13] MAC is more often correlated with right sidedness, advanced stage at presentation, and peritoneal dissemination, and has different molecular biological patterns than non-mucinous adenocarcinoma (NMAC). [4, 14-16] However, the prognostic value of the mucinous histology remains controversial. Several studies reported that MAC was associated with poor prognosis, [16-18] while others did not confirm this conclusion. [4, 19-21]

To our knowledge, data are scarce regarding the prognostic impact of sidedness and histology stratified by each other. We suspect that non-mucinous RSCC, non-mucinous LSCC, mucinous RSCC, and mucinous LSCC might represent different disease entities. In the present population-based study of patients with stage II-IV colon cancer, we aim to investigate whether the prognostic impacts of tumor side and histology on patient survival differ according to each other.

Using the National Cancer Institute's Surveillance, Epidemiology, and End Results (SEER) database (18 registries), we identified 254040 patients with colon cancer diagnosed between January 2004 and December 2012. As presented in Figure 1, 81342 patients met the inclusion criteria for this study. Because SEER is public-use data, no institutional review was sought and informed consent was waived.

Patients with cancer of the cecum, ascending colon, and transverse colon were defined as having RSCC, and patients with cancer of the descending or sigmoid colon were considered as having LSCC. NMAC was defined on the basis of the third edition of the International Classification of Diseases for Oncology histology codes 8140, 8144, 8210, 8211, 8221, 8261, 8262, and 8263 and MAC, on the basis of the codes 8480 and 8481. Patients were further divided into four subgroups on the basis of sidedness and histology (S-H): non-mucinous RSCC, non-mucinous LSCC, mucinous RSCC, and mucinous LSCC.

This study is based on SEER database which is public-use data, thus no institutional review was sought and informed consent was waived.

Flowchart of patient selection process for the study cohort.

The χ2 test was used to compare baseline clinicopathologic features between the S-H groups. To allow for more accurate measurement of the prognostic impact of sidedness and histology, we used an inverse probability propensity score weighting approach for multiple groups (≥ 2) [22] with stratification for tumor stage to generate a weighted cohort in which the clinicopathologic features (i.e., age, sex, race, marital status, year of diagnosis, SEER region, tumor grade, T and N stage, and total evaluated lymph node count) were balanced between each pair of S-H groups. Propensity score methods are useful to reduce or minimize the effects of confounding when estimating the effects of treatments, exposures, or interventions in observational or non-randomized interventional studies. [23] It has been shown that that both the inverse propensity score weighting and propensity score matching allow for the estimation of the causal effect with minimal bias. [24] As compared with the propensity score matching approach, inverse propensity score weighting can be more flexibly applied to comparison between multiple groups and hence was used in the current study. [22, 25]

After inverse propensity score weighting, OS was compared between the RSCC and LSCC groups and between the MAC and NMAC groups, as well as among the S-H groups. Survival curves for patients in different groups were generated using the Kaplan-Meier method and compared using the log-rank test. Cox proportional hazards models with inverse propensity score weighting and robust sandwich variance estimators [26] were used to assess the associations of sidedness, histology, and S-H group with hazard ratios (HRs) for death. Interaction tests were performed to determine whether the impacts of sidedness and histology on OS were significantly influenced by each other using Cox proportional hazards models.

After inverse propensity score weighting, patient characteristics were well balanced between each pair of the four S-H groups in all three stage subgroups (Supplementary Tables A-C).

Prognostic interaction between tumor side and histology 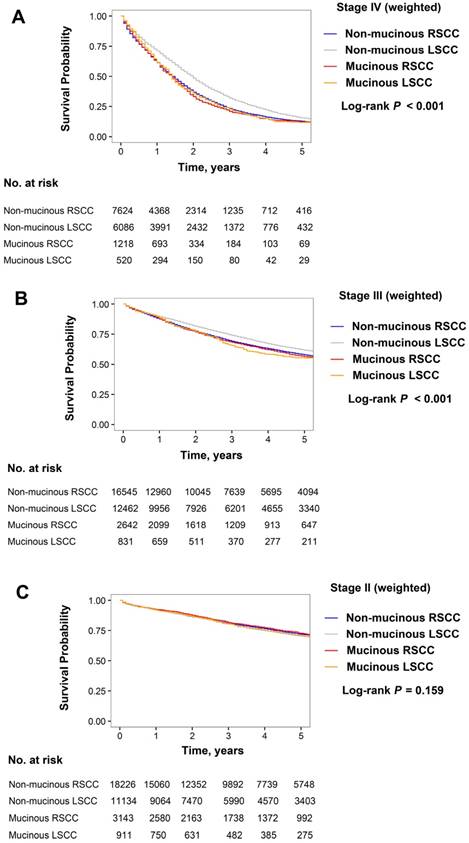 For sensitivity analysis, we repeated the primary analyses after excluding patients with transverse colon cancer (10536 cases) or re-classifying these patients into the LSCC group. Additionally, we repeated the analyses after excluding patients in the tails of the distribution of propensity scores. [27] Under these circumstances, the conclusions were consistent with those of the primary analyses (data not shown).

To the best of our knowledge, this is the first study that demonstrates that the prognostic impacts of tumor side and mucinous histology are affected by each other in stage III-IV colon cancer; that is, the prognosis for non-mucinous LSCC was significantly better than that for non-mucinous RSCC and that for mucinous LSCC, whereas the survival was similar between left-sided and right-sided MAC, and between mucinous and non-mucinous RSCC. In contrast, the survival was comparable among the four S-H subgroups for stage II colon cancer.

Since clinicopathologic factors are optimally balanced by inverse propensity score weighting, tumor biology most probably drives the complex association of sidedness and histology with survival. Not only unfavorable molecular features (e.g., BRAF mutation, KRAS mutation, and CpG island methylation) but also favorable ones (e.g., deficient DNA mismatch repair [dMMR], chromosome stability and diploid) are more common in RSCC and MAC. [8, 9, 16, 28-32] As shown previously, the overall percentage of dMMR was up to 22% in stage II colon cancer, [33] which could partially balance out the negative prognostic impact of right sidedness and mucinous histology in the stage II subgroup. Moreover, the efficacy of chemotherapy and biologic agents may differ according to tumor side and histology, particularly in stage IV colon cancer. In the post hoc analysis of the FIRE1 trial, LSCC showed greater benefit from first-line cytotoxic chemotherapy than RSCC. [34] Additionally, reports of subgroup analysis from the FIRE3 and CALGB/SWOG 80405 trials suggest that patients with RSCC benefit less from anti-EGFR therapy than those with LSCC. [3, 35] Moreover, it was reported that MAC showed a poorer response to cytotoxic chemotherapeutic regimens than NMAC. [15, 16, 36] In the present study, the presence of either right sidedness or mucinous histology was correlated with an 8-month decrease in median OS and an over 25% increase in risk of death as compared with non-mucinous left-sided tumors in the stage IV subgroup, and the prognoses were similarly poor for stage IV non-mucinous RSCC, mucinous RSCC, and mucinous LSCC (16.5 months for all). Taken together, these findings suggest that both sidedness and histology should be considered during clinical decision-making processes and adopted as risk-stratification factors for advanced colon cancer. Moreover, recent studies suggest that despite dismal prognosis, the Commonsense Molecular Subtype 1 (predominantly right-sided tumors) and MAC are more likely to have a higher mutation count and stronger immune infiltration and activation.[2, 37] Therefore, further researches are warranted to investigate whether right-sidedness and/or mucinous histology can be used as additional markers to dMMR or high microsatellite instability for selecting candidates for PD-1 blockade. [38, 39]

The present study has some limitations. First, only limited data on patient-level characteristics have been provided by the SEER database, whereas data on patient comorbidities and performance status, tumor molecular features, and chemotherapy and chemotherapeutic regimens are unavailable. Because we assessed OS as the endpoint, medical comorbidities or other competing causes of death might influence our results. Still, OS is the most valuable endpoint for cancer patients and has no difference in definition between hospitals. Moreover, although the definition of the mucinous histology has been standardized, there might be variations in the diagnosis depending on the interpretation of the individual pathologist, which might result in misclassification. Despite these limitations, given the large sample size and the population-based nature of the SEER database, we are able to perform adequately powered survival analyses stratified by tumor side, histology, and stage, which is hard to achieve with single-institution studies.

We feel grateful that this work was supported by the Natural Science Foundation of Guangdong Province [grant number 2014A030312015]; Science and Technology Program of Guangdong [grant number 2015B020232008]; Science and Technology Program of Guangzhou [grant number 15570006, 201508020250, 201604020003]. We also thank the staff members of the National Cancer Institute and their colleagues across the United States and at Information Management Services, Inc., who have been involved with the Surveillance, Epidemiology, and End Results (SEER) Program.

5. Saltzstein SL, Behling CA. Age and time as factors in the left-to-right shift of the subsite of colorectal adenocarcinoma: a study of 213,383 cases from the California Cancer Registry. J Clin Gastroenterol. 2007;41:173-7

27. Stürmer T, Rothman KJ, Avorn J, Glynn RJ. Treatment effects in the presence of unmeasured confounding: dealing with observations in the tails of the propensity score distribution - a simulation study. Am J Epidemiol. 2010;172:843-54