Gastric cancer (GC) is the fourth most common cancer and the second leading cause of cancer-related death in the world (1). Although GC mostly occurs in the 50-70 age groups and the overall incidence of GC has declined in last decade, the incidence rate in younger patients has increased (2, 3). Compared to the older age group, the clinicopathological features and prognosis of young GC patients remain controversial. Some studies have revealed that the prognosis of GC is worse in younger patients due to delayed diagnosis or more advanced stage (4-6). However, other studies state that the prognosis in the young patients is comparable to the older patients (7-9), or even better(10, 11). The controversy findings may result from many reasons, including sample size, ethnicity, and different definitions of young age group. Most literatures defined young age as below 40 or 45 years(5-7, 9, 12-19), while others used 30, 50, 60 or even 70 (4, 8, 10, 11, 20-23). The difference of cut-off value for ages may lead to different outcomes of analysis. Besides, in clinical practice, we found that the proportion of extremely young patients (20-30 years old) was increasing, and prognosis of this age group was poor. To investigate the association between age and prognosis, we reviewed the epidemiologic and clinicopathological characteristics of GC patients based on Surveillance, Epidemiology, and End Results (SEER) population-based data.

Another cohort from the Sun Yat-sen University Cancer Center (SYSUCC) was used as external validation data. It included all the gastric adenocarcinoma cancer patients who received therapy and had full record of follow-up in SYSUCC during 2000 and 2013 (Supplementary table 1). The study protocol for the Chinese cohort was approved by the independent Ethics Committees at SYSUCC.

For the Race/Ethnicity, we reclassified the patients into 5 groups: “Caucasian”, “African American”, “Asian”, “Others” and “Unknown”.

The study population was based on the SEER cancer registry. We restricted eligibility to patients with gastric adenocarcinoma (including mucinous adenocarcinoma and signet ring cell carcinoma) from 1973 to 2014 with an age≥18. We excluded cases without follow-up records (survival time code of 0 months).

The patients' demographic and tumor characteristics were summarized with descriptive statistics. Comparisons of categorical variables were performed using the Chi square test, and continuous variables were compared using Student's t test. The primary endpoint of this study was 5-year cause specific survival (CSS), which was calculated from the date of diagnosis to the date of cancer specific death. Deaths attributed to gastric cancer were treated as events and deaths from other causes were treated as censored observations. Survival function estimation and comparison among different variables were performed using Kaplan-Meier estimates and the log-rank test. The independence of the prognostic factors was adjusted for other known factors including age at diagnosis and tumor stage. All of statistical analyses were performed using the Intercooled Stata 13.0 (Stata Corporation, College Station, TX). Statistical significance was set at two-sided P < 0.05.

This study with SEER data was deemed exempt from institutional review board approval by Sun Yat-sen University Cancer Center and informed consent was waived. The study protocol for the Chinese cohort was approved by the independent Ethics Committees at SYSUCC.

We identified 79,505 GC patients diagnosed between 1973 and 2014 with an age≥18. The median age of the whole population was 68 years old (mean±SD: 66.43±13.74). We divided the patients into 11 age groups (every 5 years of age). Since the number of patients younger than 30 was small, we combined these patients into one group. If the median overall survival between two adjacent groups were significantly different, the youngest age of the latter group was set as the cut-off value (Table 1). Based on the cut-off points, all the patients were divided into 4 groups as follows: young age patients: 18-34 years; middle-age patients: 35-64 years; elderly patients: 65-74 years; extremely elderly patients: >74 years. Young age patients accounted for 1.72% (1369/79505) of all GC patients.

Variables showing a trend for association with survival (P < 0.05) were selected in the cox proportional hazards model. Tumor location, ethnicity, tumor size (≥5cm), surgery and TNM stage were identified as independent prognostic factors in young GC patients by both univariate and multivariate analysis.

Cause specific survival among patients with different age groups from SEER data. 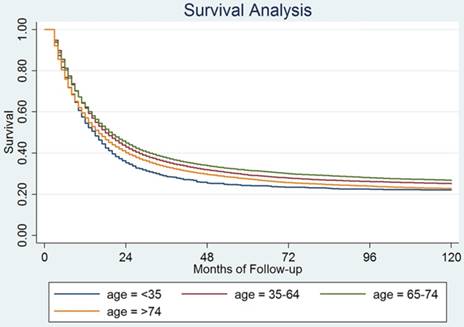 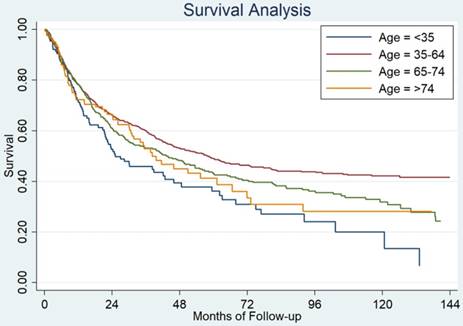 During the last few decades, the incidence of GC has declined in most countries. However, there is a rising trend in the incidence of GC in young age patients (2). Our study also showed that the proportion of young GC patients had increased in the last 4 decades. It has been suggested that GC in young patients has different clinical features and tumor behavior from older gastric cancer. Most common reported features by literatures included female dominance, location in upper third area, undifferentiated and diffuse histologic types, advanced stage at diagnosis (5-7, 9, 10, 15, 23, 28, 29). In our study, the percentage of female patients in the young patient subgroup was higher than that in other age groups. The male-to-female ratio in the young age group was 1.14, in contrast to 2.16 in middle age group and 2.08 in elderly group. The reason for higher proportion of female in the young age group remains controversial. Sex hormone especially estrogen has been suggested to play a role in pathogenesis of GC (14, 30-33). Some studies reported the protective effect of estrogen in GC (30, 32, 33), while others claimed the opposite (14, 31). Chung et.al suggested that the excessive exposure of estrogen without the counter effect of progesterone may increase the risk of GC (14). Further studies are needed to clarify the underlying mechanism of female dominance in young age GC patients.

Regarding histologic classifications, previous studies have showed poor-differentiated or undifferentiated and diffuse-type gastric cancer predominated in young age patients (7, 9, 14, 15, 23, 34). Our study also showed a higher proportion of diffuse type and poor differentiated gastric cancer in the young age group. Previous studies indicated that intestinal-type and well differentiated GC originates from intestinal metaplasia or atrophic gastritis, which is associated with infection by Helicobacter pylori. This progression from infection of H.pylori to pre-malignant stage and finally malignant tumor may take many years (35-37). However, the diffuse-type adenocarcinoma or poor-differentiated gastric cancer may develop without passing all these stages. Young age patients have fewer years to pass through these stages, which may partially explain why diffuse-type and poor-differentiated is more common in the young age group. Moreover, it has been reported that diffuse type GC is associated with E-cadherin deregulation upon genetic alterations (38), and E-cadherin gene (CDH1) mutations are more common in young age GC (39). According to the definition of hereditary diffuse gastric cancer, diffuse gastric cancer patients who are younger than 40 years old have met the criteria (40). Hence the genetic factors may play an important role in the development of GC in young age patients.

To explore the factors that contribute to the worse survival in pretty young GC patients, we carried out the univariate and multivariate analysis. We found that location of tumor, ethnicity, tumor size, surgery and TNM stage were independent risk factors in young age patients. Previous studies have suggested various clinicopathological factors, including tumor location, tumor size, depth of invasion, lymphovascular invasion, peritoneal metastasis, distant metastasis, curative resection, CEA and CA125 level, and TNM stage (5-7, 10, 14, 17-19, 23, 34, 41). Curative resection was the most common risk factor seen in these studies. Several studies found that the prognosis of young age patients after curative surgery was comparable or better than the old age patients (5, 23, 41, 42), and prognosis of advanced stages was worst in young age patients than the old age patients (29, 43). However, few young age patients present with alarm symptoms and they do not receive regular screen by gastroscopy. More patients in young age group were diagnosed at stage IV and lost the chance for curative resection. Considering genetic factors may play a role in development of early gastric cancer, it is reasonable to offer earlier screening to young people with family history. Further studies are warranted to figure out the high risk factor for gastric cancer and based on these to design the screen strategy in high risk young people. It is also important to find out more effective screen methods, such as liquid biopsy or superfine gastroscopy.

There were some limitations to this study. Firstly, it was a retrospective study. Secondly, as this study overlapped long time frame and AJCC staging system for gastric cancer changed, the current study couldn't reflect the stages and clinical practice of gastric cancer in previous years. Thirdly, the SEER database does not include data on signs and symptoms, family history, level of tumor markers, chemotherapy, and other factors that might affect prognosis. Further studies are needed to elucidate the mechanism for poor prognosis of young age patients.

This study demonstrated that gastric cancer patients <35 years old had a poor prognosis. Location of tumor, ethnicity, tumor size, surgery and TNM stage were independent risk factors on prognosis for young patients. Early detection of gastric cancer is very important in all patients but in young patients it is of paramount importance.

We would like to thank the staff members of the National Cancer Institute and their colleagues across the United States and at Information Management Services, Inc., who have been involved with the Surveillance, Epidemiology and End Results (SEER) Program.

8. Pisanu A, Podda M, Cois A, Uccheddu A. Gastric cancer in the young: is it a different clinical entity? A retrospective cohort study. Gastroenterol Res Pract. 2014;2014:125038