Background/objective: Uveal melanoma (UM) is the most common intraocular malignancy and has a high tendency to metastasize to the liver. Although primary tumours can be successfully treated, there is currently no effective treatment for metastatic UM. To gain insight into the genetics of UM, we performed the targeted next-generation sequencing (NGS) of UM samples from a non-Caucasian population.

Results: Recurrent coding mutations were found in the known UM drivers GNAQ and GNA11. FOXO1, PIK3R1 and HIF1A were also found to harbour somatic mutations in more than 20% of patients, a result that may indicate previously undescribed associations between these genes and UM pathogenesis. Patients with HIF1A and FOXO1 mutations exhibited worse overall survival (OS). In multivariate analysis, FOXO1 mutation was an independent prognostic factor for OS (P<0.05) that was associated with an increase in the risk ratio by a factor of 1.35. Notably, we found that HIF1A and FOXO1 mutations were associated with metastatic transformation of UM (P<0.05 and P<0.001, respectively).

Conclusion: Our findings from analyses of targeted NGS data shed new light on the molecular genetics of UM and facilitate the exploration of mutations associated with metastatic potential.

Uveal melanoma (UM) is the most common intraocular malignancy and can arise at three sites: the iris, the choroid, and the ciliary body. [1]UM tumours are highly aggressive and exhibit a high tendency to metastasize to the liver. [2]Due to a lack of effective systemic therapy, the median survival time of patients with metastatic UM is 12.5 months. [3]

Dramatic breakthroughs in the treatment of cutaneous melanoma (CM) have been achieved over the past decade. Targeted therapy such as the use of BRAF and MEK mutation inhibitors can improve overall survival (OS) for CM patients who harbour specific mutations. [4] However, the development of targeted therapy for UM is hampered by a lack of understanding of genetic changes associated with UM. Therefore, investigating potential high-frequency mutations in UM is crucial and could provide benefits for direct clinical applications.

Based on genomic, transcriptomic, and proteomic high-throughput screening of UM samples, several driver genes for UM have been detected. The molecular alterations associated with UM differ from those associated with CM. Driver mutations related to the pathogenesis of UM, such as mutations in GNAQ, GNA11, and BAP1, have also been revealed; these mutations are distinct from those related to CM. [5-7] GNAQ or GNA11 mutations lead to constitutive activation of the mitogen-activated protein kinase (MAPK) pathway and represent early events in tumourigenesis in UM. [8]BAP1 mutations are strongly associated with the progression and metastasis of UM. [7]Most research on the molecular landscape of UM has focused on Caucasians, and little data are available for other races. Asian CM patients significantly vary from Caucasian CM patients with respect to genetic profiles and clinical characteristics; [9-11] however, the genetic mutations associated with UM in non-Caucasian populations remain unclear.

To gain insight into the genetics of UM, we performed the targeted NGS of UM samples from a non-Caucasian population. We evaluated 35 mutated genes in the MAPK and PI3K/AKT pathways. We then analysed correlations between mutation status and clinicopathological features, with a particular focus on metastatic transformation. Our findings can facilitate the selection of more appropriate therapeutic treatments for UM in clinical practice, especially for patients with a high risk of metastasis.

Matched Formalin-fixed, paraffin-embedded (FFPE) tumor tissues and blood samples were obtained from 107 Chinese UM patients who visited Peking University Cancer Hospital. All of these samples were collected between June 2009 and December 2017. Clinical data, including gender, age, tumour side, tumour thickness, metastasis status, and survival (with follow-up continuing until September 2018, loss to follow-up or patient death), were collected. Diagnoses of UM were confirmed histopathologically for all patients. This study was approved by the medical ethics committee of Peking University Cancer Hospital & Institute and was conducted according to the Declaration of Helsinki Principles.

Associations between mutations in MAPK pathway genes and patients' clinicopathological features were analysed. We found that HIF1A mutation was significantly correlated with tumour metastasis (Table 2, P<0.05).

Associations between mutation status of genes in the MAPK and PI3K/AKT pathways and OS for uveal melanoma patients in univariate Cox regression analyses. 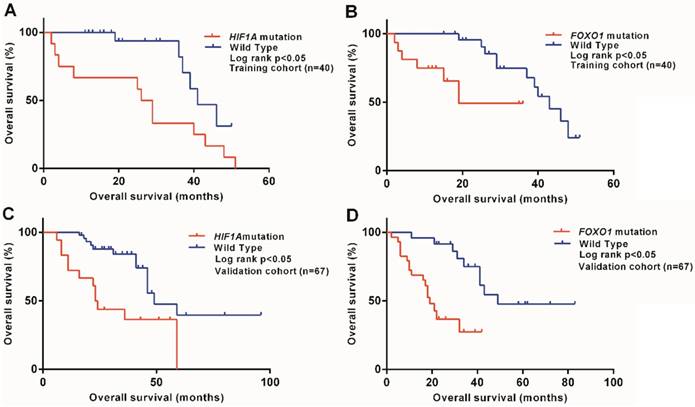 We evaluated associations between mutations in PI3K/AKT pathway genes and patients' clinicopathological features and found that FOXO1 mutation was associated with metastatic transformation (P<0.001).

Cox analyses were performed to investigate the prognostic value of gene mutations in the PI3K/AKT pathway. In univariate analyses, FOXO1 mutation status was significantly correlated with worse OS for UM patients (P<0.05), as shown in Table 2. Parameters that were significant in univariate analyses were assessed in a multivariate Cox analysis. In this multivariate analysis, FOXO1 mutation was an independent prognostic factor for OS (P<0.05) that was associated with an increase in the risk ratio by a factor of 1.35, as shown in Table 3.

With respect to genetic mutation profiles, UM is different from CM in that BRAF and NRAS mutations are not predominant. Instead, 83% of UM patients harbour mutations in GNAQ or GNA11.[6] The reported frequencies of GNAQ mutation range from 42-49% in Caucasian populations. [5 8 13] In the cohort examined in this investigation, the gene mutation rate for GNAQ was 46.7%, which was similar to previously reported rates in Caucasian populations. Although the GNA11 mutation rate was reported to be 32.6% in a Caucasian population, [13] this rate was only 21.5% in the current study, a much lower frequency than that observed in the Caucasian cohort. It remains unclear whether this discrepancy in the frequency of GNA11 mutation was attributable to ethnic differences.

UM is extremely deadly due to its high metastatic potential. Several biomarkers for predicting UM metastasis have been studied, such as BAP1, EIF1AX and SF3B1. [14-16] In our cohort, we found that HIF1A and FOXO1 mutations were associated with metastatic transformation of UM (P<0.05 and P<0.001, respectively).

Tumour hypoxia is a prominent characteristic of the tumour microenvironment and could activate a series of genes that mediate metastasis.[17] Several studies have demonstrated the role of hypoxia in the metastatic behaviour of melanoma.[18] HIF1A (hypoxia-inducible factor 1 alpha) is an essential regulator of the hypoxic stress response.[19] Furthermore, the association between HIF1A and melanoma metastasis has already been studied.[20] Hanna found that inactivation of HIF1A led to decreased melanoma metastasis.[20] Chang also demonstrated that HIF1A was an accurate predictor of UM metastasis in a Caucasian population.[21] Consistent with these previous results, we found that HIF1A mutation was significantly associated with tumour metastasis in UM. Cox univariate analyses also indicated that HIF1A mutation was significantly associated with outcome for UM.

There are four FOXO (Forkhead box class O) proteins: FOXO1 (FKHR), FOXO3a (FKHRL1), FOXO4 (AFX) and FOXO6. These proteins play crucial roles in regulating series of tumour-related processes.[21] Nakamura found that FOXO1 is a critical effector of PTEN-mediated tumour suppression.[22] Zhang showed that in prostate cancer, inactivation of FOXO1 could drive the promiscuous expression of Runx2 target genes involved in cell migration and invasion and promote tumour progression.[23] Dong found that in hepatocellular carcinoma, FOXO1 could suppress the ZEB2-induced epithelial-to-mesenchymal transition (EMT) to inhibit tumour metastasis.[24] In our cohort, the FOXO1 mutation was significantly associated with metastatic transformation of UM. The FOXO1 mutation was also found to be an independent prognostic factor for UM in both univariate and multivariate analyses.

The prognosis of patients with UM remains dismal due to a lack of effective treatment. Overall, 80% of UM patients have mutations in the GNAQ and GNA11 genes, which constitutively activate the MAPK and PI3K/AKT pathways; therapies targeting downstream effectors of these pathways, such as MEK, AKT, and protein kinase C (PKC), are currently being investigated. Unfortunately, the results to date have been disappointing. Selumetinib, a highly selective inhibitor of MEK, improves progression-free survival (PFS) in UM, but no OS benefit has been observed. [25]Efforts to optimize the efficacy of targeted therapy remain ongoing.

In conclusion, in this study, we showed for the mutation patterns of UM in a non-Caucasian cohort, with a focus on gene mutations that affect key molecules in the MAPK and PI3K/AKT pathways. These findings illustrate the distinct biological mechanisms underlying UM pathogenesis and metastatic transformation and may provide evidence to improve targeted therapy for UM.