Objectives: The receptor for advanced glycation end products (RAGE) is an oncogenic trans-membranous receptor expressed in many cells. The aim of this study was to clarify the association between RAGE gene 4 single nucleotide polymorphisms (SNPs) and the risk, invasion, metastasis and overall survival of gastric cancer.

Conclusions: RAGE gene SNP rs1800625 was significantly associated with gastric cancer risk, and rs1800625 and rs184003 were related to tumor clinical stage, indicating that RAGE gene may be a gastric cancer-susceptibility gene.

Gastric cancer is a major cause of cancer-related deaths worldwide, and it is the fifth most common malignancy [1-3]. Gastric cancer has a high incidence rate in East Asia, and in particular nearly 42% of global gastric cancer cases occur in China [4]. Despite advances in diagnosis and treatment, the prognosis for patients with advanced gastric cancer remains dismal.[5] Gastric carcinogenesis is a complex, multistep and sequential process [6]. Like other malignancies, many factors may contribute to the development of gastric cancer, such as nutrition, dietary habits, salt consumption, excessive alcohol intake, tobacco smoking, Helicobacter pylori (H.pylori) infection, chronic gastritis, atrophyintestinal metaplasia and dysplasia [7-12]. Besides these factors, a large number of studies have demonstrated that the development of gastric cancer is partly under genetic control [13-15]. Recently, several promising genes have been identified as potential gastric cancer susceptibility genes. An important one is the receptor for advanced glycation end products (RAGE) gene.

RAGE is an oncogenic multidisciplinary trans-membranous receptor expressed in a number of cells. As a member of immunoglobulin superfamily of receptors, RAGE carries unique properties that make it a key component in the pathogenesis of many diseases and their impediments, such as inflammation, vascular diseases and different malignancies [16-18]. In addition, numerous clinical studies confirmed that the expression of RAGE was associated with prostate cancer [19], gastric cancer [20], gallbladder cancer [21], pancreatic cancer [22], lung cancer [23], colorectal cancer [24] and oral squamous cell carcinoma [25]. Besides, growing evidence suggests that some single nucleotide polymorphisms (SNPs) in RAGE gene were related to the angiogenesis and tumor metastasis [25], and blocking RAGE signal can inhibit the growth and metastasis of glioma cells [26]. Gu et al. reported that mutation of RAGE gene rs2070600 was associated with a significantly higher risk of gastric cancer [15]. Based on above observations, it is reasonable to hypothesize that RAGE gene is a promising candidate of gastric cancer. To test this hypothesis, we here genotyped four well-characterized SNPs in RAGE gene, rs1800625 (T-429C), rs1800624 (T-374A), rs2070600 (Gly82Ser) and rs184003 (G1704T), to see whether their genetic variation can alter the risk of gastric cancer and associate with its invasion, metastasis and overall survival.

This study was approved by the Research Ethics Committee of Fujian Provincial Cancer Hospital.

This study included 387 patients who had gastric cancer confirmed by histopathology at Fujian Provincial Cancer Hospital between January 2008 and December 2010, and all patients received no chemotherapy or radiotherapy. Of the total 387 patients recruited in this study, 18 patients were lost to follow-up, 369 patients with gastric cancer were assessed in final analysis. Another 493 cases of the same period who took physical examinations at this hospital were selected by a random number table method as control group, and they were matched with patients on age (± 5 years old), sex and place of residence. All study subjects were Han Chinese who lived in Fujian Province for more than 10 years, and had no blood relationship with each other. Tumor histological grade was determined according to the American Joint Committee on Cancer (AJCC) system (2010) and the International Union against Cancer (UICC). Written informed consents were obtained from all patients and controls.

The adjacent tissues of gastric cancer specimens from patients were embedded in paraffin using standard methods. Then, genomic DNA was extracted according to the Tiagen DNA kit instructions. Controls provided 5 ml venous EDTA anticoagulant blood according to Beijing BioTeke of the whole blood extraction DNA kit operating instructions. The amount of DNA was detected by UV spectrophotometer, and absorbance values (A values), A260 and A280 were measured with the ratio ranging from 1.8 to 2.0.

To test the accuracy of PCR-LDR method, a total of 96 DNA samples were randomly selected from the total sample, and they were genotyped using the same method, with exactly the sample findings for duplicated samples.

Statistical analysis was performed using the SPSS software version 19.0 (SPSS Inc). Continuous variables were expressed as mean ± standard deviation (SD). Statistical significance was tested by a chi-square (χ2) or the Fisher's exact test. Satisfaction of all genotypes with the Hardy-Weinberg proportions was calculated in control groups. Linkage disequilibrium was depicted using the Haploview software version 4.2. The genotypes of four examined SNPs in RAGE gene were explored by unconditional logistic regression analyses to obtain odds ratio (OR) and its 95% confidence interval (CI). Survival curves were calculated according to the Kaplan-Meier method and compared using the log-rank test. A two-sided p-value < 0.05 were considered statistically significant.

The final analysis included 369 cases and 493 controls who were frequency matched as previously described. About 70.7% of gastric cancer patients were male, and patients aged 60 years or over accounted for 48.5%. 69.0% of controls were male, and controls aged 60 years or over accounted for 48.1% (Table 2). There were no significant differences in age and sex between patients and controls (p>0.05). The genotype distributions of four SNPs in controls were checked by the Hardy-Weinberg equilibrium test (Table 1), and no deviations were noticed (all p>0.05).

The linkage disequilibrium of four studied SNPs is presented in Supplementary Figure 1. In logistic regression analyses, RAGE gene rs1800625 TT genotype was associated with a significantly reduced risk of gastric cancer (OR: 0.72; 95% CI 0.55-0.95; p=0.021) after adjusting for age and sex, and the power to reject the null hypothesis that this OR equals 1 was 66.1% (Table 3). Additionally, the T allele also reduces the risk of gastric cancer (OR: 0.67; 95% CI 0.46-0.97; p=0.032), with study power of 82.4%. In contrast, there were no significant differences in the genotype and allele distributions of the other three polymorphisms between the cases and controls with the increase risk for the development of gastric cancer (all p>0.05).

Considering the association between SNPs and clinical features of patients with gastric cancer, we analyzed whether the variation of SNPs were linked to TNM stage and lymph node metastasis. In our study we found that the polymorphisms of RAGE gene rs1800625 and rs184003 were associated with tumor clinical stage (p=0.010, p=0.032, respectively) (Table 4). However, no evidence demonstrated that the SNPs of RAGE gene was related to Lymph node metastasis of gastric cancer (all p>0.05). As shown in Table 4.

Demographic characteristics of the study subjects

aThe p was calculated after adjusting for age and sex under logistic regression model.

RAGE activates central cell pathways including mitogen-activated protein kinase, Cdc42 / Rac and nuclear factor-nB signaling by binding to ligands [17,28,29]. Previous studies demonstrated that the association between RAGE genetic polymorphisms and gastric cancer risk [15]. In this study, we found that RAGE gene rs1800625 TT genotype and T allele were significantly associated with a reduced risk of gastric cancer. In addition, accumulating evidence shows that the expression of RAGE gene may be strongly related to the invasive and metastatic activity of gastric cancer [19,20]. Our findings indicated that two SNPs in RAGE gene, rs1800625 and rs184003, were associated with tumor clinical stage. Besides, the patients who carried the T gene of rs1800625 had significantly longer survival time. 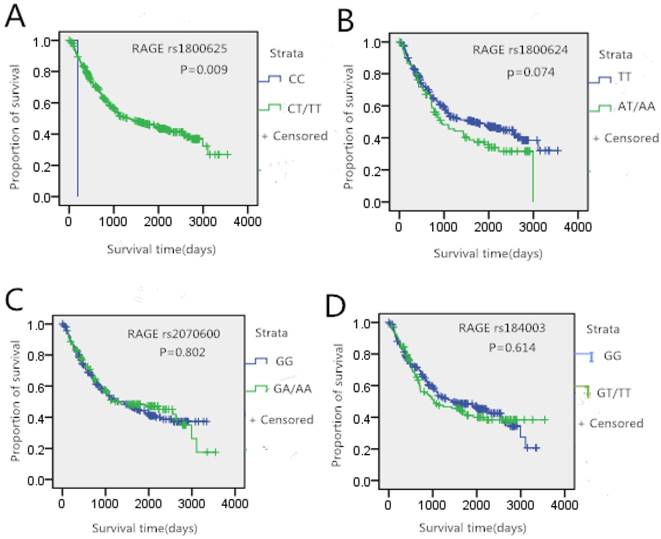 Gu et al. found that this SNP was associated with the increased risk of gastric cancer among subgroups of younger subjects aged ≤ 58 years [15]. On the other hand, Li et al. reported that the rs2070600 AG genotype was significantly associated with an increased risk of gastric cancer among nonsmokers, nondrinkers and gastric cancer patients [1]. However, our results did not show similar results, and may need a large sample size and more detailed risk factor information to validate.

Several limitations for this study should be acknowledged. First, we only genotyped four well-defined SNPs in RAGE gene, and other SNPs were of additional interest in association with the risk and prognosis of gastric cancer. Second, the sample size involved was not large enough to derive a reliable estimate, and so our findings needed to be confirmed in large, well-designed studies. Third, only Chinese subjects were enrolled for analysis, and the extrapolation of our findings to the other ethnic groups was limited.

This study was supported by the Natural Science Foundation of Fujian Province (Grant nos. 2016J01508), Joint Funds for the innovation of science and Technology, Fujian province (Grant number: 2017Y9090) and the Ministry of Health P.R. China (Grant no. WKJ2016-2-05).