Conclusion: The current study suggested that the addition of LAT to EGFR-TKI could provide satisfactory survival benefit for EGFR-mutant NSCLC patients with oligoprogression during first-line EGFR-TKI treatment.

Lung cancer is the leading cause of cancer-related death worldwide.1-2 Non-small cell lung cancer (NSCLC) accounts for more than 80% of all cases. Epidermal growth factor receptor (EGFR) plays a critical role in cancer cells proliferation and survival. EGFR activating mutations occur more frequently in Asian patients compared with Caucasian patients.3-5 Landmark clinical trials have demonstrated the superior progression-free survival (PFS) and quality-of-life of EGFR tyrosine kinase inhibitors (TKIs) over the standard platinum-based doublet chemotherapy in NSCLC patients with EGFR activating mutations.6-12 Several EGFR TKIs (gefitinib, erlotinib, icotinib and afatinib) have been the standard first-line therapy in patients with EGFR-mutant NSCLC. However, acquired resistance would occur in patients who initially responded to EGFR TKI, after median PFS of 10-14 months.6-12 Radiological progression does not always imply that all metastatic sites share the same cause of resistance. Some tumor sites might still be sensitive to EGFR TKI beyond Response Evaluation Criteria in Solid Tumors (RECIST) disease progression. The potential tumor heterogeneity suggests that continuation of EGFR TKIs may provide additional benefit in patients with slow progression.13-15

We conducted a retrospective study on patients with stage IIIB/IV EGFR-mutant NSCLC who had oligoprogressive disease during the first-line EGFR-TKI therapy from March 2011 to February 2016 at Shanghai Pulmonary Hospital. Recruited patients met the following criteria: they had diagnosis of pathologically confirmed NSCLC with confirmed activating EGFR mutation (exon 19 deletion or exon 21 L858R mutation), with stage IIIB/IV disease according to the 7th edition of the American Joint Committee on Cancer staging system, were 18 years or older, with an Eastern Cooperative Oncology Group (ECOG) performance status (PS) score of 2 or less, had received EGFR-TKI as first-line therapy, with five or fewer metastases, not including the primary tumor during the first-line EGFR-TKI therapy. The oligoprogressive lesions were radically treated with LATs. Oligometastatic disease was defined as the presence of ≤ 5 lesions in 1 to multiples organs during EGFR TKI therapy. Never-smoker was defined as a person who had smoked fewer than 100 cigarettes during his/her lifetime. Patients received continuous EGFR-TKI therapy until symptomatic extracranial progression, rapid progression, worsening ECOG PS or life-threatening complications as examples of those who may not be suitable for continued TKI therapy or clinicians believed that patients could not benefit from continuation of TKI therapy. The treatment response was evaluated 6-8 weeks after the initiation of therapy and then every 2 months according to RECIST 1.1. The EGFR-TKIs used in this study included gefitinib (250 mg, once a day), erlotinib (150 mg, once a day), and icotinib (125 mg, three times a day). EGFR mutations were tested by an amplification refractory mutation system as described in our previous studies (Amoy Diagnostics Co., Ltd., Xiamen, China).19 All mutational analyses were performed at the Thoracic Cancer Institute, Tongji University Medical School, Shanghai, People's Republic of China.

Descriptive statistics were used to summarise patient characteristics by treatment group. PFS1 was calculated from time of initiation of TKI therapy to first RECIST 1.1 defined progress disease (PD). PFS2 was calculated from time of initiation of TKI therapy to off-TKI PD. Overal survival (OS) was calculated from the date of lung cancer diagnosis to death from any cause or was censored at the last follow-up date. Kaplan-Meier curve and 2-sided log-rank test were used for univariate survival analyses. The Cox proportional hazards model was used for uni- and multivariate survival analyses to calculate the hazard ratio (HR) and corresponding 95% confidence intervals. Subgroup analysis was also carried out with age, gender, ECOG PS, hitology, Disease stage, metastases number, mutation type, EGFR TKIs, reponse to EGFR TKIs in 6 months and oligoprogressive symptom as the stratification factors. P values were 2-sided and considered significant if < 0.05. All statistical analyses were performed using the SPSS statistical software, version 22.0 (IBM Corp., Armonk, NY).

A total of 206 patients with oligoprogressive diseases harboring EGFR mutations were included, who were treated with first-line EGFR-TKI within the study period. The patient characteristics were presented in Table 1. The majority of patients (174/206, 84.5%) had histology of adenocarcinoma and the median age was 58 years. Briefly, 58.3% of patients were female, 74.3% had ECOG PS 0 or 1, 81.1% had stage IV disease, 60.7% were never smokers, 38.3% had only one site metastases, 56.8% had exon 21 L858R mutation and 68.0% had partial or complete response.

Kaplan-Meier plot of (A) PFS1, PFS2 and (B) OS for all patients in this study cohort. Abbreviations: mPFS, media progression-free survival; mOS, media overal survival. 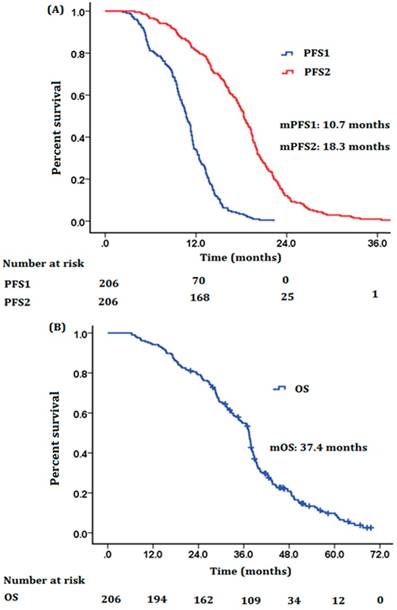 The most common toxicities of EGFR TKIs therapy included skin rash, diarrhea, neutropenia, fatigue, nausea, vomiting, and pneumonitis. The majority of toxicities were grade 1 to 2 (G1-2). G3 skin rash occurred in 11 (5.3%) patients. G3 diarrhea occurred in 8 (3.9%) patients. G3 pneumonitis was observed in 3 (1.5%) patients. No G4 or G5 toxicity was recorded. The majority of adverse events attributing to LATs occurred to lung. G3 radiation pneumonia was reported in 3 patients within 3 months after SBRT. There was no other documented G3/4 adverse event due to the addition of radiotherapy. 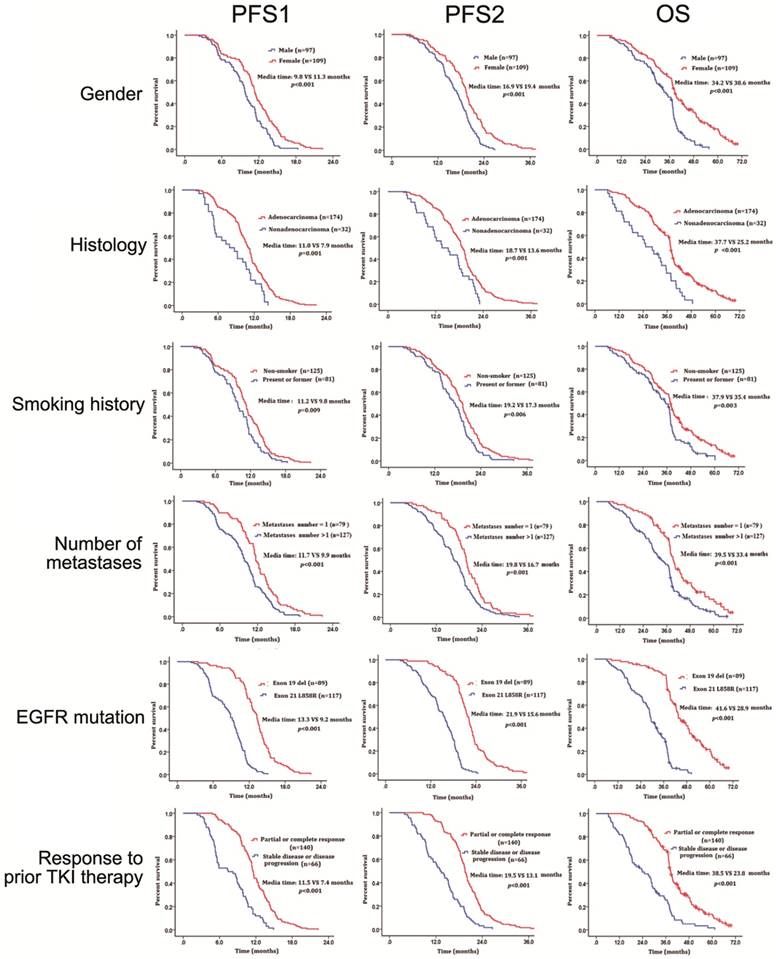 Multivariable analysis of covariables associated with PFS and OS.

Almost all patients receiving EGFR-TKI therapy will eventually experience disease progression. Premature discontinuation of EGFR TKI therapy may result in rapid progression of symptoms and tumor regrowth, while reintroduction of TKI therapy could slow tumor growth again.20 Preclinical data indicated that coexistence of EGFR-dependent and EGFR-independent clones arising in vitro from the same environmental stress.21 On removal of selective pressure by discontinuation of EGFR-TKI therapy, the TKI-sensitive clones may regrow and result in rapid PD with the potential risk of flare-up of symptoms. Therefore, continue EGFR-TKI treatment beyond RECIST progression may prolong survival benefits in clinically selected patients. ASPIRATION has demonstrated a potential improvement in median PFS with continuation of erlotinib beyond progression.22 However, the characteristics of those patients who continued erlotinib therapy and those who did not were not balanced. Significantly more patients who had recurrent disease, ECOG PS 0 or 1 at PFS1, longer median PFS1, improved depth of response, and a longer median time from best overall response to PFS1 continued erlotinib therapy than those who did not. IMPRESS reported that continuation of gefitinib after radiological disease progression on first-line gefitinib did not prolong PFS in patients who received platinum-based doublet chemotherapy as subsequent line of treatment.23 Therefore, the patient population who could benefit from continuing EGFR-TKI therapy remained controversial.

Patients who developed local or slow/minimal progression (oligoprogression) during EGFR-TKI treatment present unique clinical characteristics which could benifit from continual EGFR-TKI plus LAT. Lo 13 et al showed that continuation of EGFR-TKI therapy plus locoregional treatment (surgery and radiotherapy) after PD, delayed the need for second-line chemotherapy by 3 months. In a retrospective analysis by Weickhardt 24 et al, 25 paitents (15 ALK positive cases, 10 EGFR mutant cases) continuing TKI therapy with LAT beyond PD significantly extended PFS. However, the sample size of these studies was too small. To our knowledge, this is one of the largest single institutional analyses in the literature of NSCLC patients with EGFR mutant who developed oligoprogresson and received LAT during first-line EGFR-TKI therapy. The median PFS1 from the study was consistent with previous studies of first-line EGFR-TKI therapy in EGFR mutation-positive NSCLC. 6-12 The median PFS2 was 18.3 months and the median OS was 37.4 months in this whole cohort, which were similar to those observed in the retrospective studies. 24-26 The results of mPFS2 and mOS in the current study were longer than that in the ASPIRATION study (14.1 months in median PFS2, 31.0 months in median OS),22 suggesting that first-line EGFR TKIs therapy plus LATs might provide better outcome in EGFR-mutant NSCLC patients who had oligoprogressive disease. Therefore, continual EGFR TKI as systemic treatment plus additional LAT for progressive sites may be appropriate in EGFR-mutant patients with oligoprogresson in clinical practice.

There are several limitations that should be acknowledged. Firstly, this is a single arm retrospective study in a single institutional, which inevitably results in a selection bias. Secondly, this study did not use predefined treatment strategies according to the different progression pattern types. The actual treatment strategy utilized with regard to continuing EGFR TKI treatment plus LAT or switching to a cytotoxic chemotherapy or third-generation EGFR TKI after the RECIST-PD assessment was at the discretion of the physician. Thirdly, re-biopsy was not performed in most patients to investigate possible mechanisms of acquired resistance such as the presence of EGFR T790M mutation, MET amplification, or transformation to small cell lung cancer. Perhaps most importantly, we do not have a comparator to judge the true benefit from EGFR-TKIs continuation treatment or LAT.

This study provided rationale for considering the approach of continuation of first-line EGFR-TKI therapy plus LAT in EGFR-mutant NSCLC patients after oligoprogression. Combination of EGFR TKI plus LAT could provide additional benefits for these patients. Further multicenter, prospective studies are needed to confirm the benefit of continuation of first-line EGFR TKI and LAT after oligoprogression.