Long non-coding RNAs (lncRNAs) are a special kind of non-protein-coding RNA transcripts > 200 nt in length [3]. In recent years, cancer biomarker research has focused on ncRNAs, particularly on lncRNAs, which play an important role in regulating gene expression [4-7]. In addition, many studies have reported that lncRNAs are related to malignant phenotypes of cancer cells [8-11]. It has also been reported that expression of lncRNAs is correlated with cancer grading and staging. Therefore, lncRNAs are considered to special regulatory elements for the development of cancer. However, investigation of dysregulation and function of lncRNAs in cancer has just begun and more research is urgently needed for deeper understanding of the lncRNA regulatory network.

SNHG7 is a newly discovered lncRNA that is closely related to the development and carcinogenesis of several tumors, such as lung cancer [12], renal cell carcinoma [13] and hepatocellular carcinoma [14]. In our study, we found that SNHG7 was up-regulated in bladder cancer tissues compared to the paired adjacent normal tissues. We also found that expression of SNHG7 was higher in high-grade than low-grade tumor tissues. SNHG7 was more abundant in invasive than in non-invasive tumors. Therefore, we supposed that SNHG7 might be a potential effective biomarker in bladder cancer that could enable effective molecular-targeted therapy.

We collected 40 tumor specimens from the patients diagnosed with urothelial bladder carcinoma who were treated with partial or radical cystectomy. We preserved bladder cancer and paired adjacent normal tissues from patients by snap-freezing in liquid nitrogen immediately after surgical removal. Each patient agreed to donate their tumor tissues for our study and we obtained written informed consent from them. Our study was approved by the Institutional Review Board of our hospital.

lncRNA-SNHG7 siRNA of was synthesized by Genepharma (Suzhou, China). The siRNA sequences: (sense) 5'-GCUGGAAUAAAGAGUAACAUU-3'; (antisense) 5'-AAUGUUACUCUUUAUUCCAGC-3'. We also purchased the negative control siRNA from Genepharma. We incubated the cells and transfected lncRNA-SNHG7 siRNA or negative control siRNA into cells when they were grown to 70%-80% confluence in tissue culture plates, using Lipofectamine 3000 Transfection Reagent (Invitrogen).

Cell proliferation was evaluated using Cell Counting Kit-8 (CCK-8; Beyotime Institute of Biotechnology, Shanghai, China). The cells were cultivated in 96-well plates for 24 h with normal medium. The cells were transfected with lncRNA-SNHG7 siRNA or negative control siRNA when the cells grew to 70%-80% confluence with Lipofectamine 3000. Ten microliters of CCK-8 (5 mg/ml) was added to each well after transfection at 0, 24, 48 and 72 h. The cells were incubated for 1 h and OD450 was measured using a microplate reader (Bio-Rad, Hercules, CA, USA). Finally, the OD450 values were converted to cell numbers by utilizing standard curves.

Apoptosis was evaluated utilizing the Caspase-3 ELISA Kit (R&D, Minneapolis, MN, USA). The cells were cultivated in 96-well plates for 24 h with normal medium. The cells were transfected with lncRNA-SNHG7 siRNA or negative control siRNA when the cells grew to 70%-80% confluence with Lipofectamine 3000. At 48 h after transfection, apoptosis was evaluated by measuring and analyzing the activity of caspase-3. The microplate reader (Bio-Rad) was used to measure OD450. We calculated the ratios between the OD450 values of lncRNA-SNHG7 siRNA transfected cells and those of negative control siRNA transfected cells.

Bladder cancer cell lines were transfected with lncRNA-SNHG7 siRNA or negative control siRNA when the cells grew to 70%-80% confluence. The monolayer cells were scratched and then cultivated under normal conditions. We measured the migration distance at 0, 12 and 24 h after scratching for each bladder cancer cell line.

A total of 104 SW780, T24, UMUC and 5637 cells (~150 µl) were collected with serum-free medium and spread into the upper chamber. We filled the lower chamber with 600 μl of medium that contained 10% FBS. We pre-coated the membrane with Matrigel (Corning Inc., Corning, NY, USA) for 6 h at 37° C. The plates were incubated at 37° C and allowed to grow for 24 h. After 24 h, the membranes were fixed with pre-cooled methanol and stained with crystal violet. 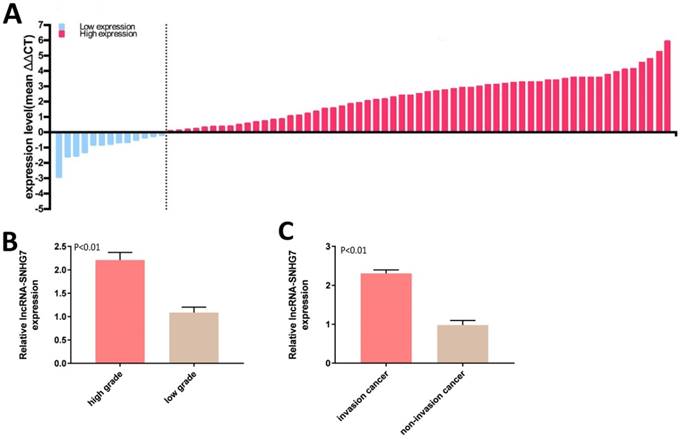 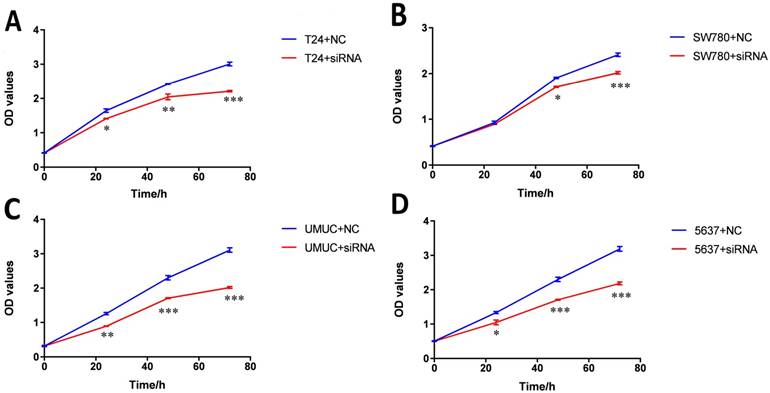 Inhibition of cell proliferation by knockdown of lncRNA-SNHG7

Changes in motility of bladder cancer cell lines SW780, T24, UMUC and 5637 were detected and analyzed by wound healing assay. We transfected lncRNA-SNHG7 and negative control siRNA into all the bladder cell lines and cultured them for 48 h. We performed the wound healing assay in monolayer culture and then cultured the cells under normal cell culture conditions. Decreased cell motility was observed in SW780, T24, UMUC and 5637 cell lines (Fig. 4). We concluded that silencing lncRNA-SNHG7 repressed the motility of cancer cells.

Changes in invasiveness of SW780, T24, UMUC and 5637 cell lines were measured by Transwell assay. We transfected lncRNA-SNHG7 and negative control siRNA into all the bladder cell lines and cultured them for 48 h. We collected the cells and used them for the Transwell assay, which showed that suppression of lncRNA-SNHG7 repressed the motility of cancer cells (Fig. 5).

In order to explore the potential downstream targets that induced the above phenotypic changes after inhibition of lncRNA-SNHG7, we utilized western blotting to measure the protein expression levels of Bax, p21 and E-cadherin, which are known to be involved in the development of bladder cancer. As previously reported, Bax protein plays an important role in inducing apoptosis and is inhibited in a variety of tumors [16]. To demonstrate the relationship between lncRNA-SNHG7 and Bax protein, we used western blotting to detect the expression level of Bax after knockdown of lncRNA-SNHG7. Compared to the negative control group, the cells transfected with lncRNA-SNHG7 siRNA showed up-regulation of Bax (Fig. 6). p21 is a hallmark of cell cycle regulation and acts as an inhibitor of cell growth [17]. Western blotting showed that expression of p21 was significantly increased when lncRNA-SNHG7 was suppressed by siRNA (Fig. 6). As shown in a previous study, E-cadherin serves as a strong suppressor of cell migration [18]. We also found that expression of E-cadherin was obviously increased after silencing lncRNA-SNHG7 (Fig. 6). These data suggested that Bax, p21 and E-cadherin genes might serve as potential downstream targets of lncRNA-SNHG7, and that lncRNA-SNHG7 plays a role in regulating bladder cancer cell phenotypes by down-regulating expression of Bax, p21 and E-cadherin protein.

At present, cancer therapy is a major challenge worldwide. In order to decrease the severe adverse effects of traditional cancer therapy, molecular-targeted therapy has aroused widespread attention. Therefore, exploring tumor-related targets is essential for the development of molecular-targeted therapy in cancer. Recent studies have indicated that lncRNAs can be key players in the development of cancer formation. lncRNAs are highly correlated with several human diseases through regulation of DNA methylation, transcription and chromatin remodeling [5, 19, 20]. Furthermore, increasing evidence shows that lncRNAs are correlated with the expression of some genes [21, 22]. Therefore, it has been confirmed that lncRNAs have significant clinical potential to be a group of cancer biomarkers and effective therapeutic targets [23, 24].

Knockdown of lncRNA-SNHG7 induced apoptosis. Transfection of lncRNA-SNHG7 or negative control siRNA into bladder cancer cells for 48 h. We determined the changes in apoptosis using ELISA. Apoptosis induction was observed in lncRNA-SNHG7 siRNA-transfected bladder cancer cell lines SW780 (A), T24 (B), UMUC (C) and 5637 (D) using ELISA (P < 0.01). Data are shown as mean ± SD. We performed each experiment in all cell lines in triplicate for three independent times. 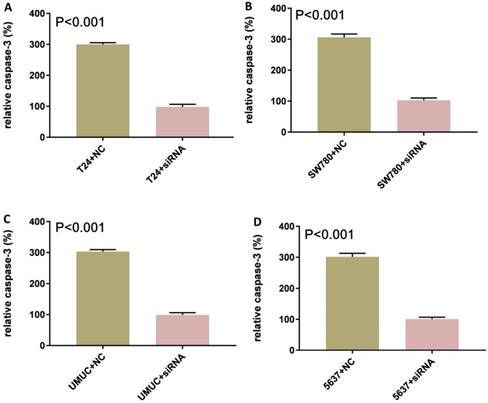 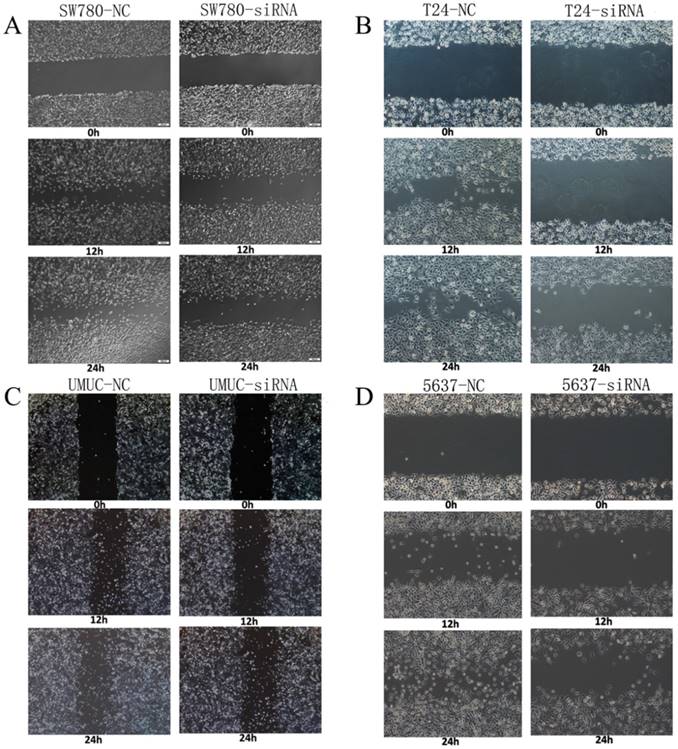 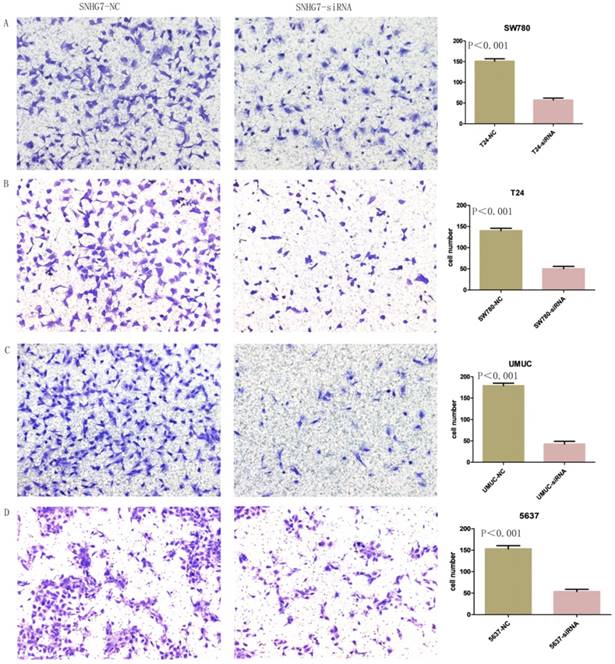 21. Mattick JS, Gagen MJ. The evolution of controlled multitasked gene networks: the role of introns and other noncoding RNAs in the development of complex organisms. Molecular biology and evolution. 2001;18:1611-30