Purpose: To evaluate the infection incidence in breast cancer patients whether they have a major autoimmune disease or not.

This retrospective cohort study reviewed a database of cancer patients who had been newly diagnosed with female breast cancer from January 2000 to December 2016 at Taichung Veterans General Hospital. The inclusion criteria for breast cancer patients with autoimmune disease were: (1) who had undergone a complete pretreatment staging workup, and (2) had pathologically confirmed breast cancer. The major autoimmune diseases included SS, RA, and SLE. The clinical outcomes and treatments, including surgery, radiotherapy, chemotherapy, hormone therapy, and monoclonal antibody therapy, were collected from our database. Other confounding factors, including diabetes mellitus (DM), hypertension (HTN), white blood count (WBC), liver function, and renal function, were also recorded and analyzed. The lab data, including WBC, liver function, and renal function, were collected within one month from the date of diagnosis and during the course of chemotherapy, radiotherapy, hormone therapy, or monoclonal antibody therapy. The abnormal lab data grading was performed according to Common Terminology Criteria for Adverse Events (CTCAE) 3.0. The hospitalized infection diagnosis was done according to international classification of diseases (ICD) code, and the infection diagnosis included infection of respiratory tract, urinary tract, skin and soft tissue, gastrointestinal tract, liver, biliary tract, cardiovascular system, bacteremia and septicemia, along with other opportunistic infections.

The study was approved by the Institutional Review Board of Taichung Veterans General Hospital.

The endpoints were infection incidence and overall survival (OS). The infection incidence was calculated from the date of cancer diagnosis to the date of any infection diagnosis reported in the medical records. Some patients may have had several infection events at different times, so we also calculated accumulation infection incidence (person-years). The OS was calculated from the date of cancer diagnosis to the date of death from any cause, or the date of last follow-up. Survival status was defined according to whether a patient was alive or dead at the date of the last follow-up. Chi-square test was used to compare categorical variables and the Mann-Whitney U test was used to analyze the continuous variables. Survival times were estimated using the Kaplan-Meier method, while the Log-rank test was used for comparisons between the groups. Factors which displayed a tendency to affect outcomes in the univariate analysis were incorporated in the multivariate analysis. A Cox proportional hazard model was used for multivariate analysis. The statistical analyses were performed using SPSS software, version 22.0. A p value less than 0.05 was considered statistically significant. 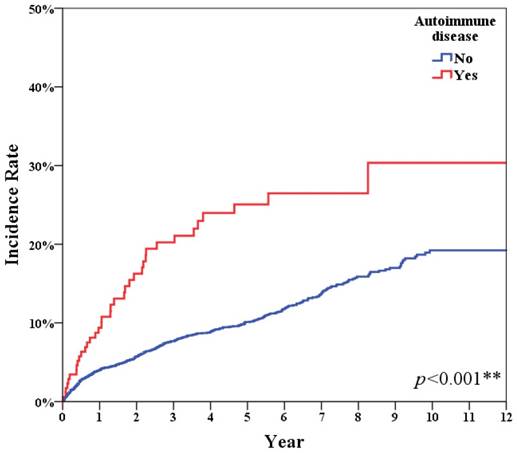 &Continuous data were expressed as median and IQR. Mann-Whitney test.

Comparison of clinical characteristics between patients with and without infection diagnosis.

Survival rate according to patients with or without autoimmune disease (p=0.366). 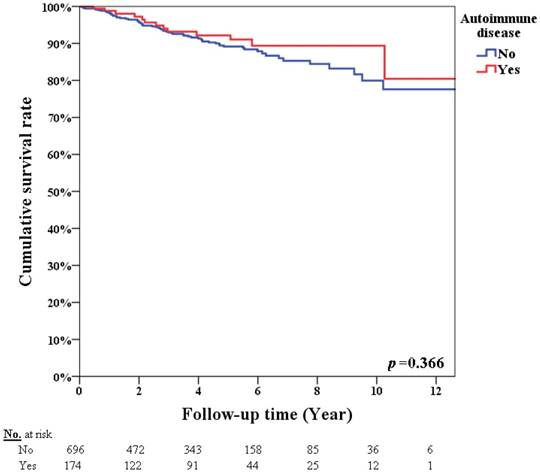 Autoimmune disease was a potential predictor of infection incidence after adjusting for clinical confounding factors.

This study was supported by Taichung Veterans General Hospital.

The study was approved by the Institutional Review Board of Taichung Veterans General Hospital.

5. Fairweather D, Frisancho-Kiss S, Rose NR. Sex differences in autoimmune disease from a pathological perspective. The Am J of pathol. 2008;173:600-609