More than 50% of worldwide esophageal squamous cell carcinoma (ESCC) patients are located in China [1]. There is no consensus about the combined therapeutic strategy for ESCC in China due to lack of randomized controlled trials (RCT). Although the multidisciplinary therapeutic strategies have been explored for many years in both western countries [2-7] and Japan [8], the treatment is quite different from region to region based on the results of local RCTs.

The North American intergroup trial for ESCC (Radiation Therapy Oncology Group, RTOG Trial 8911 or USA Intergroup 113) [2, 3] suggested that there was no survival benefit from NAC for ESCC, whereas the Japan Clinical Oncology Group trial (JCOG9907) [8] showed promising results for the same procedure. The survival benefit of neoadjuvant chemotherapy (NAC) for ESCC remains controversial worldwide [9, 10]. Due to contradictory evidence outside China and the lack of RCT in China, we collected data from published articles and found the quality control of surgical procedures in the RCTs was poor [11]. At that time, lymph node sampling and transthoracic esophagectomy, transhiatal esophagectomy were acceptable in some trials. Surgery was the only local control method that existed in the NAC strategy. Different surgical procedures and ranges of lymphadenectomies may mask the benefits of chemotherapy and significantly affect the survival rate.

In light of past RCTs [2-5, 8], we have designed a retrospective analysis in our institute. The main concern of this study was to declare the survival benefit of NAC-platinum plus paclitaxel (TP) over the primary surgery based on quality controlled and standardized surgical procedure. Minimally invasive esophagectomy with total two-field lymphadenectomy was the only used surgical procedure.

The Ethics Review Committee of Henan Cancer Hospital/The affiliated Cancer Hospital of ZhengZhou University approved this study officially. The approval number is 2016ct081. Patients' personal data were obtained. The consecutive patients were retrospectively evaluated between 06/2011 and 12/2014. The inclusion criteria were as follows: i) Thoracic ESCC; ii) Clinical staging T2-4aN0-2; iii) MIE with total two-field lymphadenectomy; iv) With follow up, without clinical missing data. The TNM Classification of Malignant Tumors 7th edition was adopted for the clinicopathological profiles [12].

All patients received a right thoracolaparoscopic esophagectomy and at least 2-field lymph node dissections. Cervical lymphadenectomy was performed when suspicious lymph node metastasis was reported on a color ultrasound. First, the patient was placed in a left semi-prone-position. The thoracic esophagus was mobilized and the lymph nodes were dissected. The regional lymph nodes included the mediastinal lymph nodes (left recurrent laryngeal never, right recurrent laryngeal nerve, paraesophageal, paratracheal, subcarinal, supradiaphragmatic and posterior mediastinal lymph nodes). Then the position was modified to a supine position. A 2-3 cm left cervical incision was made. Muscle sparing methods and blunt dissection were used to expose the cervical esophagus. In the abdominal part, laparoscope was used for gastric mobilization. A 3-cm gastric tube was made with linear staplers (TLC, Ethicon, USA) and perigastric lymph nodes (celiac, left gastric artery, common hepatic artery and splenic artery lymph nodes were dissected. Finally, the gastric conduit was delivered to the neck to be sewn with the distal esophagus by using a hand-sewn 3 layered anastomosis (Li's anastomosis) [13]. Figure 1 showed the standard extent of lymph nodes dissection. 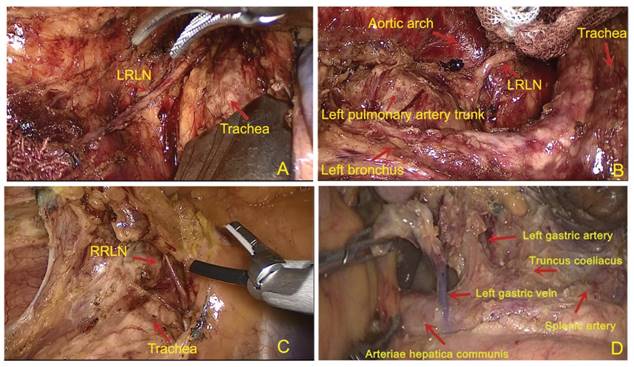 The SPSS 23.0 software for Windows (SPSS, Chicago, IL, USA) was used to perform the statistical analysis. The propensity score (PS) matched analysis was used to reduce the bias. PS was calculated to fit with variables, including age, sex, length of tumor, location of tumor, clinical T stage, clinical N stage and clinical TNM stage. The characteristics and pre-therapy data between the groups were compared using Student's t-test for all quantitative data and both a chi-square test and a Mann-Whitney U test for qualitative data. Categorical variables were compared by Fisher's exact test. The Kaplan-Meier method was adopted to analyze overall survival (OS) with a log-rank test. We reported survival rates and Hazard ratios with 95% confidence intervals (CIs). The OS was defined as the time from the operation in the surgery group and the first date of NAC to the death or most recent follow-up. A two-sided P value of 0.05 was defined as statistically significant.

Between 06/2011 and 12/2014, there were 279 consecutive patients who meet the criterion; 83 received NAC and 196 primary surgery. After PS matched analysis, there were 76 matched primary surgery patients (Figure 3). The characteristics of the 159 patients after PS matching were summarized in Table 1. The primary data was comparable. The NAC group had much earlier pathological stage (P<0.001).

CR to NAC were observed in 16 (19.3%) patients, partial responses (PR) in 48 (57.8%) patients, SD in 17 (20.5%), and progressive disease (PD) in 2 (2.4%). Therefore, the overall clinical response rate was 77.1%. During the same period, there were 6 excluded NAC patients. One patient after NAC (clinical effect, stable disease, SD) underwent R1 resection because of the invasion of aorta. Five patients didn't received surgery after NAC; three got progressive disease (PD) clinically and underwent definitive chemoradiotherapy. Two got clinical complete response (CR) after NAC, refused to do surgery and accepted definitive chemoradiotherapy.

Side effects of NAC

Operation data for both groups

Response evaluation of the patients with ESCC to NAC

Our study demonstrated that NAC with TP followed by MIE with total two-field lymphadenectomy improved OS comparing with primary surgery. There are 2 possible reasons for the better NAC results. First, NAC-TP got a high clinical (77.1%) and pathological (20.5%) response rate. Second, the standarlized two-field lymphadenectomy MIE. In a study assessing the outcome of NACR followed by surgery, en bloc esophagectomy was compared with a transhiatal esophagectomy. The more radical surgery was an independently better survival factor, regardless of the response to NACR [17]. Another study on NACR for patients with ESCC showed that the degree of lymph node dissection significantly influenced the OS [18]. Compared with NACR, NAC didn't have the effect for local control. The quality of the operation was more important in NAC than NACR for EC [19]. In the 3 large multicenter clinical trials on NAC, too little attention was given to standardize the surgical procedure [19]. All the cases included in our study represent the results of a single surgeon's experience. That was easy to standardize surgical procedure.

The side effects toxicity of TP-NAC was tolerable. Hepatorenal disorder (grade 1) was the most common side effect (44.6%) in the present study. Only 1 (1.2%) patient had Grade 4 bone marrow depression. The vomiting and stomatitis were another common side effect, occurring in 4.8% of the patients (4 cases). The adverse effects of weekly paclitaxel and a 21-day cycle of cisplatin were mild. Due to the overall mild non-hematological and hematological toxicities, the weekly TP regimen was tolerable for many patients. 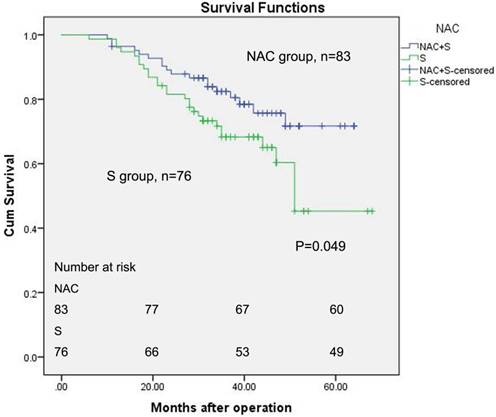 Between 06/2011 and 12/2014, there were 279 consecutive patients who meet the criterion; 83 received NAC and 196 primary surgery. After PS matched analysis, there were 76 matched primary surgery patients. Finally, there were 159 patients included in this study. ESCC, esophageal squamous cell carcinoma; NAC, neoadjuvant chemotherapy; PS, propensity score. 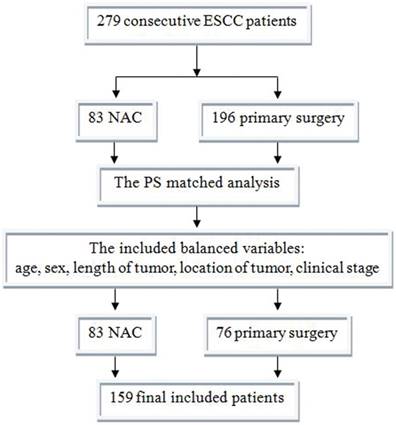 The rates of pCR in patients treated with NAC ranged from 2% to 17% in previous reports of this combined strategy [11], whereas we achieved a pCR rate of 20.5% for primary tumors and the lymph nodes, which was relatively high. In previously reports, NACR could achieve a 20%-40% pCRT rate. The high pCR rate might be explained by the fact that the TP regime was adopted in this study, whereas in the past CF was mostly adopted. More and more studies have reported that paclitaxel cell toxicity is effective for treating squamous cell carcinoma (SCC) [20]. Based on the retrospective data and clinical experience, weekly paclitaxel was tolerable, might have been related to the high pCR rate. As a retrospective study, there must be some selection bias, which may also have contributed to the high pCR rate. That was also the reason why we wanted to start a RCT.

The ESCC mostly occurs in less-developed regions of the world. More than 50% of the ESCC cases were located in China (53%, 210 000 cases) [1]. Henan province carried the highest burden of ESCC in China [21]. Based on huge patient number, in light of past trials and the results of our studies, we designed the multicenter RCT in China [22]. Compared with past trials, we emphasized standard surgical procedures and a standard range of lymphadenectomy. The recruitment of 528 cases will be done within 2.5 years ClinicalTrials.gov Identifier: NCT02395705. Hopefully, it will provide a conclusion for the using of NAC with total two-field lymphadenectomy for ESCC.

NAC with TP followed by MIE with total two-field lymphadenectomy is better than primary surgery in terms of OS without additional serious adverse events. This combined therapy might be a highly recommended treatment modality for patients with stage II/III ESCC.

4. Allum WH, Stenning SP, Bancewicz J, Clark PI, Langley RE. Long-term results of a randomized trial of surgery with or without preoperative chemotherapy in esophageal cancer. Journal of clinical oncology: official journal of the American Society of Clinical Oncology. 2009;27(30):5062-5067