Objective: To evaluate the clinical value of Ki67 by RT-PCR, we investigated the concordance of Ki67 expression by IHC and by RT-PCR, and assessed their prognostic value in HR+/HER2- early breast cancer.

Conclusions: Ki67 assessed by RT-PCR assay was weakly correlated to Ki67 by IHC. Using 5.68 as cutoff point, Ki67 by RT-PCR had shown potential as a prognostic biomarker in HR+/HER2- early breast cancer.

Ki67 as the most commonly used proliferation marker, was first detected in 1983 as a nuclear protein in Hodgkin's lymphoma cell line [1]. Its expression varies throughout the cell cycle. Ki67 is highly expressed in M phase of the cell cycle, but not in G0 phase [2]. In the era of individualized treatment, Ki67 evaluated by immunohistochemistry (IHC) is increasingly used to assess tumor proliferation, classify different tumor subtypes, predict benefit of different treatments, and help decide the use of adjuvant chemotherapy in conjunction with conventional prognostic markers for early breast cancer [3-6]. However, Ki67 is still controversy as a biomarker because of the inter-observer variability in the assessment and undefined optimal cut point as a continuous variable [7-10].

The 21-gene expression assay including 16 cancer-related genes and 5 reference genes, was developed as a multi-gene array to assess the residual risk after surgery in early breast cancer patients with HR-positive, HER2-negative and node-negative disease from three independent cohorts [11]. Recurrence score (RS) was significantly correlated with the incidence of breast cancer recurrence and the likelihood of patients' benefit from adjuvant chemotherapy [11-13]. The proliferation group in the 21-gene expression assay consists of Ki67, STK15, Survivin, CCNB1 and MYBL2. The expression of Ki67 as well as the other genes in this setting is based on quantitative reverse-transcriptase polymerase chain reaction (RT-PCR) using RNA extracted from formalin-fixed and paraffin-embedded tissue (FFPE), which might be the potential solution to problems of inter-observer variability and analytical subjectivity in Ki67 scoring.

The aim of the present analysis was to retrospectively assess the value of RT-PCR as an objective alternative to IHC for Ki67 scoring. We assessed the correlation between the proliferation group in the 21-gene expression assay and Ki67 by IHC, analyzed the impact of clinic-pathological factors on the concordance, and evaluated the prognostic value of RT-PCR assessment of Ki67 in 1259 HR+/HER2- early breast cancer patients.

The current study has received approval from the independent ethics committee of Ruijin Hospital. All patients provided written informed consent.

IHC measurement of all samples was independently performed by two pathologists. In the pathology laboratory of Ruijin Hospital, ER and PR status were evaluated on FFPE tissue blocks by IHC using the ER/PR PharmDX kit. Tumors were classified as ER- or PR-positive when ≥1% invasive tumor cells showed definite nuclear staining, irrespective of staining intensity [14]. HER2 expression was assessed with the HercepTest kit and scored as 0, 1+, 2+, or 3+, according to American Society of Clinical Oncology (ASCO)/CAP guidelines [15]. Tumors scored as 2+ were retested with fluorescence in situ hybridization (FISH) using the PathVysion HER2 DNA probe kit. Cases were considered HER2-positive if scored 3+ by IHC and/or amplified by FISH (HER2/CEP17 ratio ≥2 or average HER2 copy number ≥6.0 signals/cell) [15].

IHC measurement of Ki67 was visually scored on FFPE tissue blocks concurrently with ER and PR by two pathologists. IHC for Ki67 used the MIB-1 clone. According to the recommendations from International Ki67 in Breast Cancer Working Group, Ki67 index was defined as the percentage of tumor cell nuclear with positive immunostaining from at least three high-power (×40 objective) fields. And if there are clear hot spots, data from these would also be included in the overall score [16].

Three 10-μm sections of macro-dissected FFPE tumor samples were required for each patient used for RT-PCR assay. The expression of 16 cancer-related genes, including Ki67 and other proliferation related gene, were normalized relative to five reference genes (ACTB, GAPDH, GUSB, RPLP and TFRC)[11].

All statistical analyses were carried out in SPSS version 18.0. Correlation of continuous RT-PCR assay measurement of proliferation genes with IHC measurement of Ki67 was determined using Pearson correlation. Agreement of Ki67 expression status by IHC and by RT-PCR was examined by use of Cohen's κ statistics and chi-square tests. The effects of the clinic-pathological variables on agreement of Ki67 status determined by two assays and differences of basic characteristics between training and validation cohorts were examined by use of chi-square tests. The optimal cutoff point for Ki67 by RT-PCR against DFS was determined using X-tile bioinformatics software version 3.6.1 [17-19]. Basic R function sample() was used to divide the study cohort randomly into two cohorts to verify the results.

The standardized definitions for efficacy end points (STEEP) criteria was applied for the endpoint definition [20]. The primary endpoint of this trial was the rate of disease-free survival (DFS), defined as the first event of recurrence of ipsilateral breast tumor, local recurrence, regional recurrence, distant recurrence, contralateral second primary cancer, second primary non-breast invasive cancer, or death without evidence of recurrence. Disease-free survival rate was estimated using Kaplan-Meier estimator and tested with log-rank tests. To evaluate the prognostic value of Ki67 by RT-PCR and classical clinicopathological factors, univariate and multivariate (forward elimination) Cox proportional hazard models for DFS were estimated with each signature tested as a categorical variable. All measurements were associated with 95% confidence intervals (95% CI). Statistical tests were considered significant for P < 0.05.

Distributions of Patient and Tumor Characteristics in all patients, and in training and validation cohorts

Considering the representative value of the median Ki67 index for distribution, we chose to use the median value to determine low expression and high expression group. Table 3 shows the agreement of high and low Ki67 expression levels by IHC (≤14, >14) and by RT-PCR (≤5.30, >5.30). Ki67 status by IHC was positively but weakly correlated with Ki67 status by RT-PCR.

Prognostic value of Ki67 by IHC and RT-PCR

Distribution Pattern of Ki67 Assessed by RT-PCR in Training and Validation Cohorts. 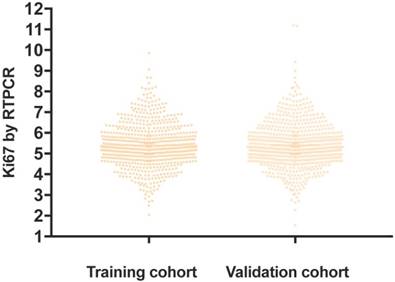 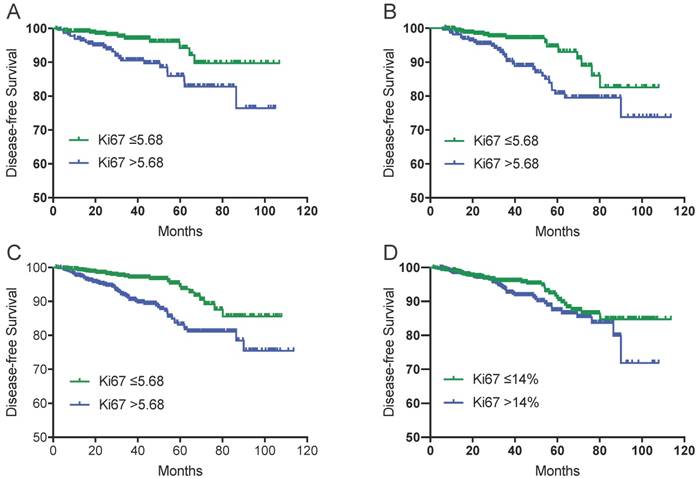 IHC assessment of Ki67 has been proposed as a potential marker to distinguish luminal A and luminal B breast cancer and guide adjuvant chemotherapy in HR+/HER2- early breast cancer [6]. Unfortunately, substantial variability in Ki67 scoring was still observed, leading to continuing pursuit for an objective method for Ki67 scoring to achieve high inter-laboratory reproducibility [8, 21, 22]. Here, we present another method for assessment of Ki67 expression in breast cancer, which is based on RT-PCR assay in the setting of 21-gene expression assay.

Although IHC assesses protein expression, while RT-PCR detects mRNA transcription levels, numerous studies have shown a high degree of concordance between the two assays [23-25]. In the study by Badve and colleagues [23], which compared ER and PR status measured by IHC and RT-PCR with 21-gene expression assay in patients from E2197 study, showed high degree of concordance and suggested RT-PCR using the 21-gene expression assay as an alternative method for determining HR status. In the current study, RT-PCR assessment of Ki67 showed a weak concordance with IHC assessment, which could partly be explained by tumor heterogeneity. According to the International Ki67 in Breast Cancer Working Group's standards [16], the IHC assessment of Ki67 was performed in the 'hot-spot' area whereas the PCR assessment is based on a non-specific portion of the tumor. Another possible reason for the weak correlation may be that epigenetic factors lead to the differences between protein expression and mRNA expression.

The association between recurrence risk and Ki67 expression by IHC and RT-PCR was analyzed. 3-year DFS estimates were obtained for the whole cohort, and separately for training and validation cohorts. Unlike the published data [5, 6], we did not see a statistically significant association between Ki67 status by IHC and disease outcome in the overall cohort. The absolute difference in 3-year DFS was only 3.5% between the patients with low Ki67 and high Ki67 expression. The poor performance of Ki67 status by IHC may be the result of insufficient adjustment for clinic-pathological factors and adjuvant treatment. Patients with high Ki67 expression by IHC were more likely to receive adjuvant chemotherapy, which may weaken the prognostic value of Ki67 status by IHC. On the other hand, a statistically significant prognostic value for Ki67 status by RT-PCR was observed in the training cohort. Low Ki67 expression defined by RT-PCR was associated with a decrease in the relative risk of relapse. Although similar results were observed in the whole population, it still needs more evidence to draw a solid conclusion, considering the multivariate analysis in the validation cohort and different results from another randomly divided sub-population.

This study has several limitations. As a retrospective study, the imbalance of tumor characteristics and adjuvant treatment between subpopulation may impact the prognostic analysis. Although Ki67 status by RT-PCR has shown a better prognostic value, further study with two independent cohorts is needed to verify the prognostic and predictive value of RT-PCR assessment of Ki67 and define the optimal cutoff point. And the main weakness in our study is that the median follow-up is too short to observe the differences of survival in Luminal breast cancer. So further follow-up is needed to evaluate the prognostic value of Ki67 expression by two assays.

In summary, this study demonstrated the potential of Ki67 by RT-PCR as a prognostic marker in HR+/HER2- early breast cancer. Further studies are warranted to verify the prognotic and predictive value of RT-PCR assay measurement of Ki67.