Nucleosome binding protein 1 (NSBP1) is identified as a new member of HMGN family and is abnormally overexpressed in a variety of tumors. However, it remains unclear whether NSBP1 is overexpressed and promotes gastric cancer. In this study we employed RNAi mediated knockdown of NSBP1 to investigate potential oncogenic role of NSBP1 in gastric cancer. In BGC823 and SGC7901 gastric cancer cell lines, we showed that NSBP1 knockdown decreased cell proliferation while increased apoptosis in vitro. Western blot analysis showed that NSBP1 knockdown decreased the levels of anti-apoptotic protein Bcl-2 while increased the levels of pro-apoptotic protein Bax. In addition, NSBP1 knockdown inhibited the growth and increased the apoptosis of SGC7901 cells xenografted in nude mice. In conclusion, this study provides the first evidence that NSBP1 enhances the proliferation while inhibits the apoptosis of gastric cancer cells, and this is related to the regulation of the expression of apoptosis related proteins by NSBP1. These data suggest that NSBP1 plays oncogenic role in gastric cancer.

Nucleosome binding protein 1 (NSBP1, also called HMGN5) is identified as a new member of high mobility group N (HMGN) family, and it regulates a variety of processes such as DNA replication and repair, gene transcription, and epigenetic modifications [1,2]. NSBP1 has been reported to be abnormally overexpressed in several types of tumors such as breast cancer, bladder cancer, prostate cancer, glioma and osteosarcoma [3-7]. However, the expression and oncogenic role of NSBP1 in gastric cancer remain to be determined.

The two shRNAs targeting human NSBP1 gene were synthesized by GenePharma (Shanghai, China). NSBP1 shRNA or control scramble shRNA was inserted into lentivirus vector pSicoR to make recombinant vectors pSicoR-NSBP1-shRNA and pSicoR-scramble-shRNA, which were co-transfected into HEK293 cells with lentiviral package system. The lentiviral particles were collected and titrated. SGC7901 and BGC823 cells were grown to 60-70% confluence and then infected with appropriate amounts of lentivirus to knockdown NSBP1.

The proteins were extracted from SGC7901 and BGC823 cells using ice-cold RIPA buffer supplemented with protease and phosphatase inhibitors. Equal amounts of samples (50 μg) were separated in 10% SDS-polyacrylamide gels and then transferred onto PVDF membranes. After blocking in non-fat milk the membranes were incubated with primary antibodies against Bax, Bcl-2, and β-actin (all from Santa Cruz Biotech, Santa Cruz, CA, USA) at 4ºC overnight, and then incubated with horseradish peroxidase conjugated secondary antibodies at 37ºC for 1 h. The blots were washed and exposed to enhanced chemiluminescence reagent.

SGC7901 and BGC823 cells were infected with lentivirus and then cultured in RPMI 1640 medium. 24 h later, the cells were collected, fixed in 70% ethyl alcohol at 4ºC overnight, then incubated with 10 μg/mL RNAse at 37ºC for 1 h. Next, the cells were washed and resuspended in 400 Annexin V binding buffer (BD Biosciences, San Jose, CA, USA). The cells were then stained with 5 μl Annexin V FITC for 15 min at 4 ºC in the dark followed by stained by propidium iodide (PI). The stained cells were then immediately subjected to flow cytometry analysis.

All animal experiments were conducted following the Guidelines for the Care and Use of Laboratory Animals of Mudanjiang Medical University. Nude BALB/c mice (4-5 weeks old, weight around 20 g) were kept in a pathogen-free facility. Uninfected SGC7901 cells or SGC7901 cells infected with NC shRNA or NSBP1 shRNA were harvested and cell suspensions (1×107 cells) in 1 ml RPMI1640 medium were injected into peritoneal cavity of nude mice. Tumor volume was calculated using the formula: the length × the width2× 0.5.

Nude mice were sacrificed and tumor xenografts were dissected and fixed with 10% formalin for 4 h, and then embedded and cut into sections. Apoptotic cells in tumor sections were analyzed using TUNEL kit (Roche Diagnostic, Indianapolis, IN, USA) following the manufacturer's instructions. Apoptotic cells showed brown nuclear staining, while hematoxylin counterstaining was used to detect all cells in the sections. Five fields were selected randomly from each section and the apoptotic rate was calculated by counting positively stained brown cells and total cells with the nuclei stained blue by hematoxylin.

The expression of NSBP1 is high in gastric cancer cells

To our knowledge, this is the first report that NSBP1 was overexpressed in gastric cancer cells, in agreement with previous studies demonstrating that NSBP1 is overexpressed in numerous tumors and may play an oncogenic role [3-7]. As a new member of HMGN nuclear protein family, NSBP1 could modulate the structure and function of the chromatin and are crucially involved in the regulation of gene transcription as well as DNA replication and repair [2,8]. 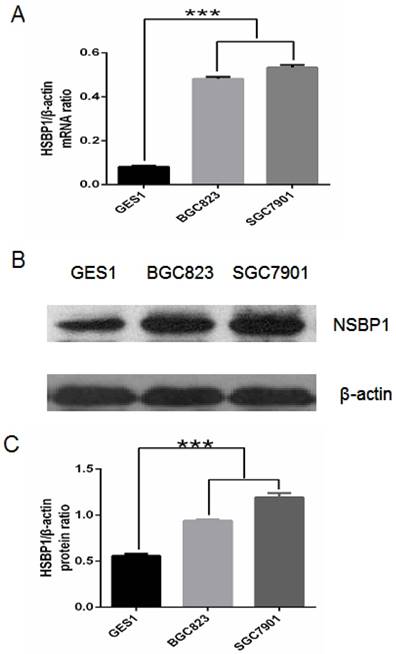 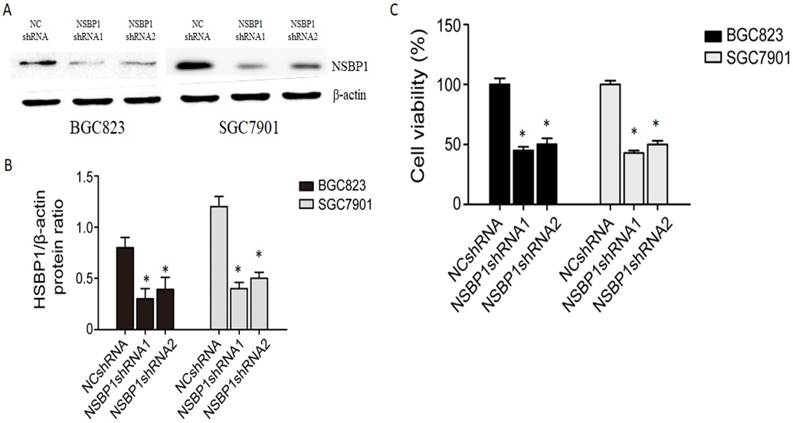 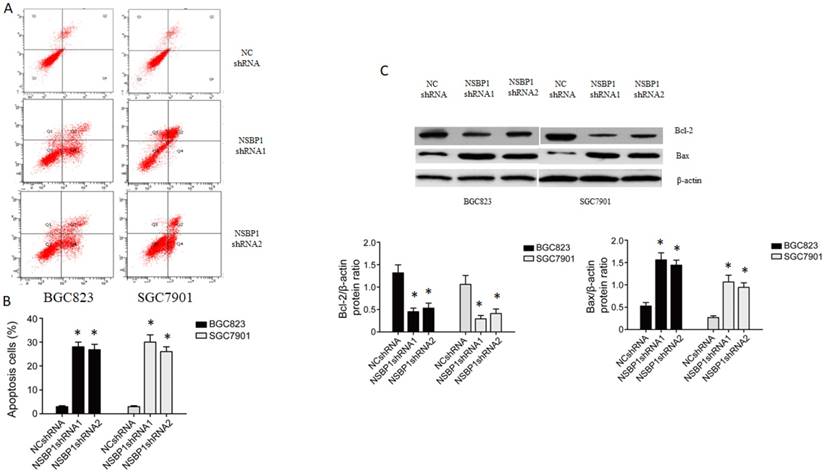 Knockdown of NSBP1 reduced in vivo tumorigenicity of gastric cancer cells. A. Typical tumors dissected from the xenografts in three groups of mice. B. Tumor growth curve of the xenografts in three groups. *P<0.05 vs. NC shRNA. C. Representative TUNEL staining of tumor sections. Apoptotic cells were stained brown and the nuclei were stained blue by counterstaining with hematoxylin. Original magnification 500 ×. D. Quantitative analysis of the percentage of apoptotic cells (n=3). ***P<0.001. 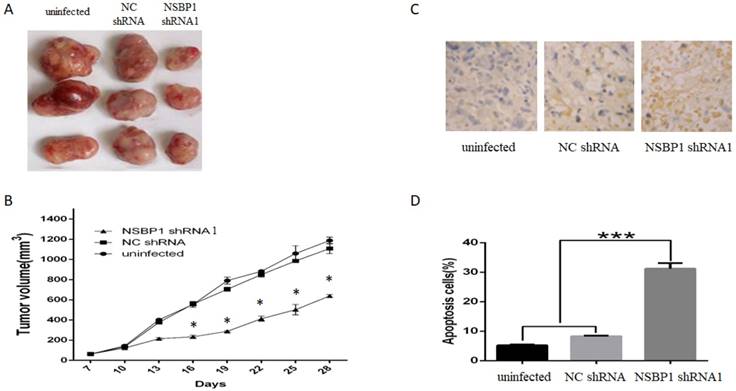 Using a loss of function approach based on shRNA mediated knockdown of NSBP1 in two gastric cancer cell lines, we demonstrated that knockdown of NSBP1 led to reduced proliferation and increase apoptosis of gastric cancer cells, accompanied by the downregulation of anti-apoptotic protein Bcl-2 and the upregulation of pro-apoptotic protein Bax. Collectively, these results indicate that NSBP1 may regulate the expression of apoptosis related proteins to inhibit the apoptosis and promote the proliferation of gastric cancer cells. A very recent study reported that HMGN5/NSBP1 promoted the proliferation and invasion of pancreatic ductal adenocarcinoma via the activation of Wnt/β-catenin signaling [9]. Canonical Wnt/β-catenin signaling is known to inhibit apoptosis and contribute to cancer resistance to chemoradiation therapy [10,11]. On the other hand, another recent study indicated that HMGN5/NSBP1 activated phosphatidylinositol 3-kinase/protein kinase B/the mammalian target of rapamycin pathway to promote renal cell carcinoma growth and metastasis [12]. Therefore, the activation of multiple signaling pathways by NSBP1 may contribute to its oncogenic role in a variety of cancer.

To confirm that NSBP1 is involved in the tumorigenesis of gastric cancer in vivo, we injected SGC7901 gastric cancer cells into nude mice to establish xenograft model. Based on this model we found that knockdown of NSBP1 inhibited tumor formation of the xenografts. Furthermore, we performed TUNEL assay on the xenografts and found that the apoptosis rate significantly increased in xenografts derived from SGC7901 cells depleted of NSBP1. These in vivo data complement the in vitro data and strongly suggest that NSBP1 promotes the tumorigenesis of gastric cancer via inhibiting apoptosis.

In summary, this study provides the first evidence that NSBP1 promotes the proliferation while inhibits the apoptosis of gastric cancer cells, and this is related to the regulation of the expression of apoptosis related proteins by NSBP1. These data suggest that NSBP1 plays an oncogenic role in gastric cancer. Notably, recent studies have shown that lentivirus mediated shRNA against genes with potential oncogenic role provides a new avenue for developing effective therapy for a variety of cancers [16-20]. Therefore, it is promising to develop lentivirus mediated NSBP1 shRNA as a novel therapeutic approach for gastric cancer.