Cloning and characterization of the putative AFAP1-AS1 promoter region

Nasopharyngeal carcinoma (NPC) is one of the most common head and neck cancers arising from the nasopharynx epithelium [1-3]. NPC has a distinctive ethnic and geographic distribution and represents a serious health problem in Southeast Asia and southern China, especially in Guangdong Province [4, 5]. The etiology of NPC is multifactorial, including Epstein-Barr virus infection, heredity and environmental factors [6-9]. NPC tumorigenesis often involves inactivation of several tumor suppressor genes and abnormal activation of several oncogenes [10-13], among which an increasing number of long non-coding RNAs (lncRNAs) have been identified in recent years [14-17]. LncRNAs are more than 200 nucleotides in length and have no open reading frame. Dysregulation of lncRNAs has been shown to be involved in the development and progression of NPC [18-20].

Among many cancer-related lncRNAs, the recently identified actin filament-associated protein 1-antisense RNA1 (AFAP1-AS1) has been the focus of great interest [21, 22]. AFAP1-AS1 is derived from the antisense DNA strand of the AFAP1 coding gene locus, and dysregulated expression of AFAP1-AS1 has been found in many types of cancers, including NPC [23, 24]. In our previous study, cDNA microarray analysis of lncRNA expression showed that AFAP1-AS1 is significantly upregulated in NPC. Consistent with this observation, AFAP1-AS1 expression is also upregulated in NPC tissues [25]. In addition, AFAP1-AS1 knockdown significantly suppresses the metastasis and invasion of NPC [26]. Moreover, high AFAP1-AS1 expression is associated with a poor prognosis of NPC patients [27]. However, to our knowledge, a potential mechanism of high AFAP1-AS1 expression in NPC has not been reported.

The gene sequence of human AFAP1-AS1 was obtained from NCBI. The potential promoter region of the AFAP1-AS1 was predicted using the online promoter prediction software BDGP (http://www.fruitfly.org/seq_tools/promoter.html), Neural Network Promoter Prediction (http://promotor.biosino.org/), and Promoter 2.0 (http://www.cbs.dtu.dk/services/Promoter/). Additionally, CpG Island Searcher (http://www.hugedomains.com/domain_profile.cfm?d=cpgislands&e=com), CpG islands (http://www.ualberta.ca/~stothard/javascript/cpg_islands.html), and CpGProD (http://doua.prabi.fr/software/cpgprod_query) were utilized to find the CpG islands. The potential binding sites of transcription factors in the AFAP1-AS1 gene were identified with the UCSC database.

To better understand the mechanism involved in the high AFAP1-AS1 expression in NPC, we used various bioinformatics tools to analyze the potential promoter region of AFAP1-AS1. The AFAP1-AS1 sequence was obtained from the National Center for Biotechnology Information (NCBI). The 2000-bp region between positions -1600 bp and +400 bp (the transcription start site was designated as +1) was identified and analyzed. The promoter sequence was analyzed by BDGP, promoter 2.0, and Neural Network Promoter Prediction. A CpG island between positions -1145 and -477 was detected using CpG Islands, CpGProD, and CpG Island Searcher programs. Based on this comprehensive bioinformatics analysis, we chose the region between positions -1521 and +220 for further study (Figure 1).

Construction of the reporter vector for the AFAP1-AS1 promoter

To analyze the transcriptional regulation of AFAP1-AS1, we used human peripheral blood-originated genomic DNA as the template to isolate the AFAP1-AS1 promoter region. A band with an expected size of approximately 1741 bp was successfully amplified and verified by electrophoresis in 1% agarose gel (Figure 2A). The fragment was then cloned into the pGL3-enhancer vector and sequenced (Figure 2B). HNE2 cells were transiently transfected with the AFAP1-AS1 promoter construct (pGL3-1521/+220), and the luciferase activity was then measured. As shown in Figure 2C, the pGL3-1521/+220 construct had a higher luciferase activity than the negative control (relative luciferase activity: candidate promoter, 84.490 ± 8.232 vs. negative control, 1.608 ± 0.175, P<0.001), indicating that the -1521/+220 region of AFAP1-AS1 contains the potential promoter. 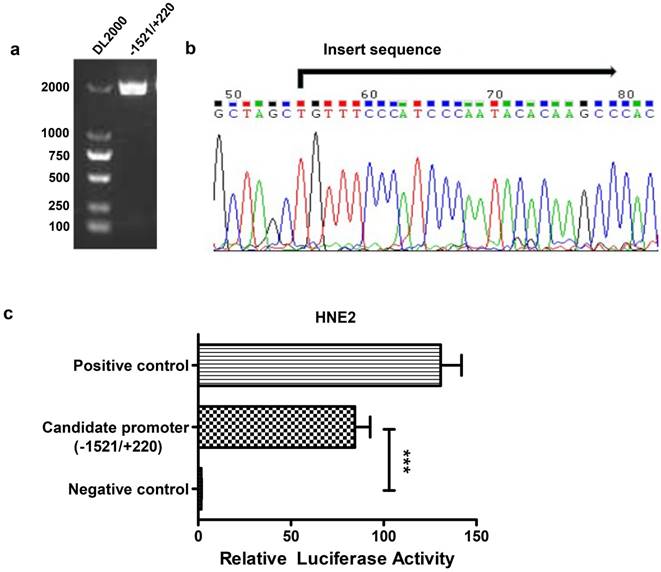 Identification of the potential transcription factor binding sites in the AFAP1-AS1 promoter region. A, Schematic representation of the predicted transcription factor binding in the -1521/+220 region using the UCSC website. B, Expression of c-Myc was measured in HNE2 cells transfected with the c-Myc overexpression vector by qPCR. C, c-Myc upregulates AFAP1-AS1 expression in HNE2 cells transfected with the c-Myc overexpression vector, compared with the control group (NC). D, ChIP assay in HNE2 cells using a c-Myc antibody, followed by quantitative real-time PCR with two sets of primers designed for two c-Myc binding sites of the AFAP1-AS1 promoter region. All ChIP data are shown relative to 10% input (defined as 1). Nonspecific antibody (IgG) served as a negative control. *P< 0.05, ** P< 0.01, ***P< 0.001. 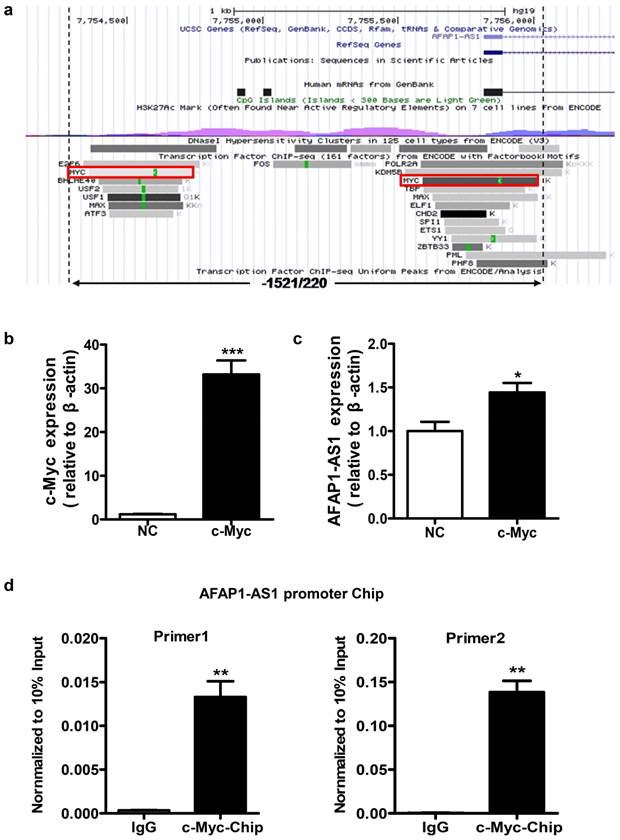 Luciferase reporter assay for the AFAP1-AS1 promoter. A, Schematic illustration of the 5'-deletion and 3'-deletion constructs of the AFAP1-AS1 promoter. B, The pGL3-enhancer and the deletion constructs were transiently transfected into HNE2 cells with pRL-TK. Luciferase activities were measured 48 h after transfection. The results are presented as the relative luciferase activity. Positive control: pGL3-control vector, negative control: pGL3-enhancer vector. The deletion samples were compared to the negative control. Data are shown as the means ± SD of at least three independent experiments. ***P< 0.001, ns: no significance. 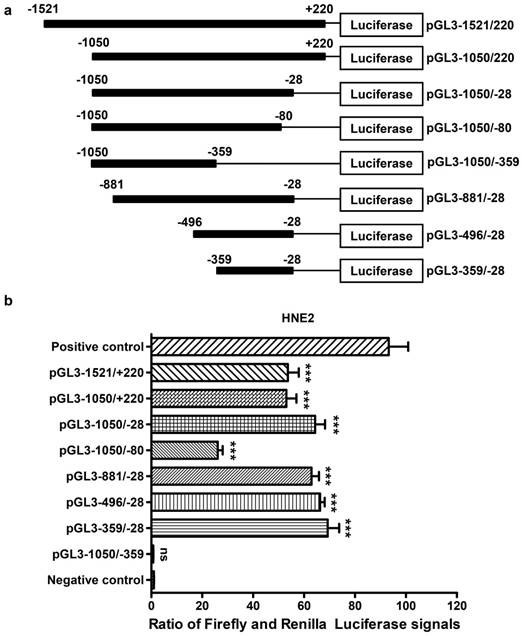 Deletion analysis of the AFAP1-AS1 promoter in NPC cells

Long non-coding RNAs (lncRNAs) are often defined as transcribed non-coding RNAs that are longer than 200 nucleotides and have no significant protein-coding potential [30-32]. In the past, lncRNAs were mistaken for transcriptional “noise”. However, with the advancement of high-throughput technologies, an increasing number of studies have focused on important roles of lncRNAs in a wide range of physiological and pathological processes, especially in cancers [33-35]. LncRNAs may act as tumor suppressors or oncogenes by regulating target gene expression at the transcriptional, posttranscriptional, and epigenetic levels. LncRNAs can affect the initiation, progression, and prognosis of various cancers, including NPC [36-39]. A growing number of lncRNAs have been reported to be closely associated with proliferation, apoptosis, metastasis, and radiation response of NPC cells, including MALAT-1 [40], LINC01420 [41], LOC553103 [42], LOC401317 [43], and AFAP1-AS1 [27].

Long non-coding RNA AFAP1-AS1 is located in the 4p16.1 region of human chromosome 4, derives from the antisense DNA strand of the AFAP1 gene, and can regulate the expression of AFAP1 [27]. AFAP1-AS1 was initially discovered in Barrett's esophagus and esophageal adenocarcinoma in 2013 [44]. Our in-depth study of AFAP1-AS1 functions in NPC and lung cancer progression showed that high AFAP1-AS1 expression might promote cell metastasis and invasion via regulation of the small GTPase Rho/Rac signaling pathway and actin filament integrity [23, 27]. In recent years, numerous studies have demonstrated that high AFAP1-AS1 levels are found in a variety of cancers, including esophageal squamous cell carcinoma [45], non-small cell lung cancer [46], pancreatic ductal adenocarcinoma [47], hepatocellular carcinoma [48], colorectal [49], cholangiocarcinoma [50], gastric [51], and gallbladder cancer [52]. In addition, the dysregulated expression of AFAP1-AS1 is often associated with cell proliferation, cell cycle progression, angiogenesis, invasion, metastasis, radioresistance and poor prognosis of cancers [53, 54].

The mechanisms behind the abnormal AFAP1-AS1 expression in cancers are not well-understood. A single study on AFAP1-AS1 showed that it was hypomethylated and overexpressed in Barrett's esophagus and esophageal adenocarcinoma [44]. Considering that transcriptional regulation is one of the most important components of gene expression regulation [55], we investigated the mechanisms regulating AFAP1-AS1 expression at the level of transcription. Our comprehensive analysis of the CpG island and promoter prediction showed that the -1521/+220 region of AFAP1-AS1 contains the potential promoter, and a luciferase reporter driven by the promoter of AFAP1-AS1 showed high expression in HNE2 cells.

To identify the necessary and required region for the basal transcriptional activity of AFAP1-AS1, a series of deletion constructs based on pGL3-1521/+220 were generated and transfected in HNE2 cells. We found that the reporters driven by the shorter 332-bp fragment (PGL3-359/-28) showed the highest luciferase activity, and the deletion between positions -80 and -28 caused a significant decrease in promoter activity. Moreover, the luciferase expression was almost undetectable with the pGL3-1050/-359 construct. Thus, a region from -359 to -28 was identified as the minimal sequence that contains the core promoter and controls promoter activity. In addition to c-Myc, we also predicted several other putative transcription factor binding sites in the promoter region of AFAP1-AS1. Among these transcription factors, CDH2 [61], ZBTB33 [62], POLR2A [63], KDM5B [64], MAX [28], and ETS1 [65] have been proven to be upregulated in different types of cancers and are closely related to tumorigenesis and tumor progression [66-69]. Remarkably, the ETS1 and Myc promoter signals are well-correlated and share many properties; for example, Myc and ETS1 can collaborate to increase expression of some oncogenic genes [65]. In addition, Myc and KDM5B can form a nuclear complex that promotes expression of several genes associated with tumorigenesis [70]. Furthermore, the Myc/MAX network comprises a group of transcription factors whose distinct interactions result in gene-specific transcriptional activation [71]. Therefore, Myc and other predicted transcription factors may exert a synergistic effect on the regulation of high AFAP1-AS1 expression.

In conclusion, to our knowledge, this study is the first to clone and characterize the promoter region of AFAP1-AS1. We found that the transcriptional factor c-Myc plays an important role in enhancing AFAP1-AS1 expression. Our findings provide new insights into unraveling the underlying mechanism of high AFAP1-AS1 expression in tumorigenesis.