Gastric cancer is the fifth most common malignant tumor in the world and the third most common cause of malignant tumor-related death [1]. Though the overall survival (OS) of gastric cancer patients has improved with the development of standardized D2 lymphadenectomy [2] and subsequent adjuvant chemotherapy in recent years [3, 4], the long-term survival rate is still unsatisfactory. Moreover, the majority of gastric cancer patients in China were diagnosed as advanced gastric cancer (AGC) at an early visit. The overall 5-year OS for AGC patients is below 20%, and it is approximately 30% for those who undergo surgery. Even after curative resection, only 30-50% of patients are still alive after 5 years [5]. Among AGC T4 gastric cancer patients, which includes tumor perforating serosa (T4a) and invasion of the adjacent structure (T4b), patients often suffered from recurrence and had dismal overall survival, even after R0 resection. Several studies have reported potential prognostic factors affecting the survival of T4 gastric cancer patients after curative resection, including lymph node metastasis, venous invasion, peritoneal washing cytology and tumor diameter[6-8]. However, the sample sizes of previous studies were small.

Recurrence is the most important factor affecting the survival of patients with GC. After curative resection for GC, recurrence patterns include local-regional recurrence, distant lymph node metastasis, hematogenous metastasis, and peritoneum implantation. According to soil and seed theory, T4 GC patients are prone to suffering peritoneal seeding. However, there are few studies exploring the recurrence patterns for T4 GC after curative resection.

In the present study, we aimed to clarify the prognostic factors and recurrence patterns for T4 GC after curative resection, which would help clinicians perform the appropriate treatment in order to improve survival.

Between January 2004 and December 2014, a total of 249 gastric cancer patients were treated with curative resection (R0 resection) and diagnosed as pathological T4 stage in Sun Yat-sen University Cancer Center. Standardized D2 lymphadenectomy or expanded resections for gastric cancer (including D2 + lymphadenectomy, or D2 lymphadenectomy plus the resection of other adjacent organs) were performed in these patients with curative resection. Tumors were staged according to the seventh edition of the American Joint Committee on Cancer (AJCC) tumor-node-metastasis (TNM) staging system [9]. Patients were excluded if they received neoadjuvant treatment, were diagnosed as late-stage gastric cancer or underwent R1/2 (microscopically/macroscopically residual tumor) resection. According to NCCN Guidelines [10], our clinicians recommended that all the included patients received adjuvant chemotherapy. However, in clinical practice, whether or not they received adjuvant chemotherapy was determined by the will of the patients.

Statistical analysis was performed using SPSS 17.0 for Windows (SPSS Inc, Chicago, IL, USA). Categorical variables, presented as rate, were compared by the χ2 (Chi-square) test. Continuous data, expressed as the mean ± standard deviation (SD), were compared by Student's t-test. Survival outcomes were analyzed using the Kaplan-Meier method and compared using the log-rank test. Factors that were considered as significant in the univariate analysis (P < 0.05) were included in the multivariate analysis by Cox regression. HR with 95% confidence intervals (CIs) were presented. P < 0.05 was considered statistically significant.

The clinicopathologic characteristics of 249 patients were summarized in Table 1. There were 221 T4a and 28 T4b GC patients receiving curative resection, comprising 165 males and 84 females, with a mean age of 56.10 years (range, 21-82 years). Some 221 patients underwent standard D2 lymphadenectomy, while 28 patients had expanded resection. The postoperative morbidity rate was 6.0%. A total of 184 patients (73.9%) received adjuvant chemotherapy after surgery. As shown in Table 2, the main organs invaded with T4b were the pancreas and spleen. 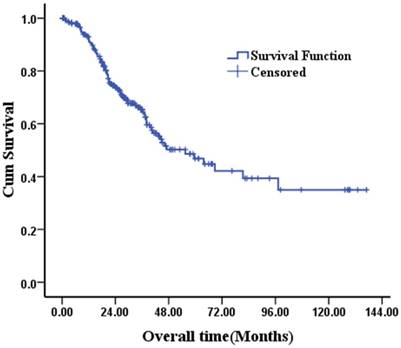 After a median follow up of 25.87 months, a total of 109 (43.8%) patients experienced recurrence. The recurrence rates for T4a and T4b patients were 92/221 (41.6%) and 17/28 (60.7%), respectively. Of these, the recurrence sites were obtained in a total of 90 patients, with a median of 15.90 (range: 1-71.1) months relapsing after curative surgery. The recurrence patterns were shown in Table 4. Among those 90 patients, peritoneal metastasis (62.2%) was the most frequent recurrence site, followed by hematogenous metastasis (26.7%), distant lymph node metastasis (24.4%) and locoregional metastasis (15.6%). The peritoneal metastasis was the most common recurrence pattern, accounting for 88.3% (10/12) recurrence in T4b, and 59.0% (46/78) in T4a. The multivariate analysis showed that the N stage and intraoperative blood loss were the independent risk factors for recurrence (Table 5). 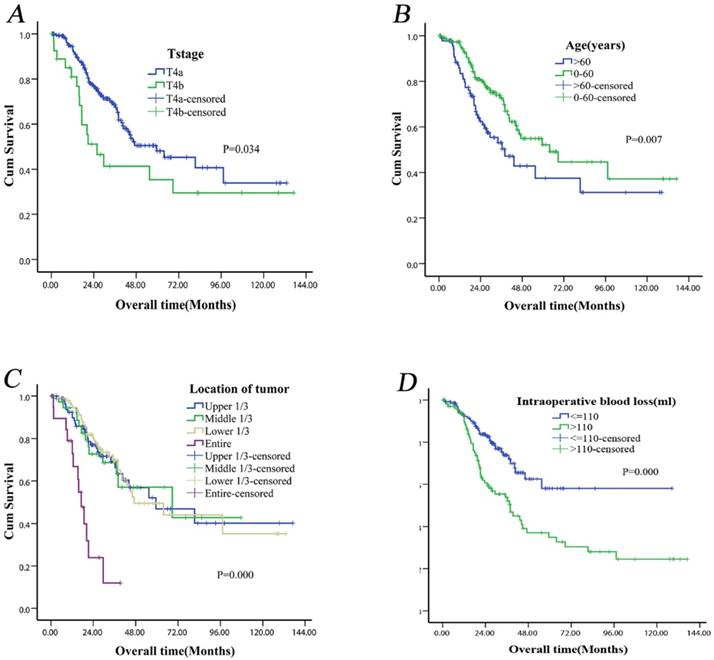 Sites of recurrence in 90 patients.

Even with the development of standardized D2 lymphadenectomy [2] and subsequent adjuvant chemotherapy [4, 11] for gastric cancer, the survival outcomes are still unsatisfactory, causing a third of cancer-related deaths worldwide [1]. Patients often suffer from recurrence after curative resection in the first 5 years, especially T4 patients. Better understanding of the prognostic factors and recurrence patterns for T4 gastric cancer will help clinicians to perform more intensive treatment strategies for high-risk patients. In the present study, our results demonstrated that age, tumor location and intraoperative blood loss were the prognostications of OS for T4 gastric cancer after curative resection. Moreover, peritoneal metastasis was the most common pattern of recurrence.

Several studies [6-8, 12, 13] had reported the prognostic factors for T4 gastric cancer. Fukuda et al [6] reported that number of metastatic lymph nodes, venous invasion and peritoneal washing cytology influenced the prognosis of T4 gastric cancer after potentially curative resection. Li et al [7] found that lymph node involvement was the only prognostic factor of OS. However, the sample sizes of previous studies were small, and they included patients with noncurative resection, such as R1/2 resection. While previous studies did not report the survival discrepancy regarding age, our results indicated that elderly patients (>60 years) had worse survival outcomes. The reasons for this might be considered as follows. First, disorder of immune function in elderly GC patients might relatively weaken antitumor capacity and lead to poor prognosis [14]. Second, compared to young patients, elderly patients cannot tolerate extensive lymphadenectomy and the toxicities of chemotherapy. Therefore, elderly patients get inadequate treatment, which affects survival.

Relationship between the recurrence and clinicopathologic characteristics by univariate and multivariable analysis in T4 gastric cancer patients after curative resection.

Peritoneal metastasis has been considered the terminal stage of gastric cancer, with a median overall survival of less than 6 months [31], accounting for almost 60% of all causes of GC death [32]. Therefore, understanding how to prevent and treat peritoneal metastasis is clinically important. In 1988, Fujimoto et al reported that hyperthermic intraperitoneal chemotherapy (HIPEC) was effective for gastric cancer patients with peritoneal seeding. A large number of studies also reported similar results [33-37]. Moreover, several prospective randomized controlled trials [38-41] also reported that curative resection with HIPEC was a useful treatment to prevent occurrence of peritoneal metastasis in advanced gastric cancer. Theoretically, HIPEC after curative resection could help eliminate free cancer cells and micro metastases in the abdominal cavity for T4 gastric cancer, which might prolong survival of patients. Nevertheless, this remained to be confirmed through well-designed randomized controlled trials.

15. Morner ME, Gunnarsson U, Jestin P. et al. The importance of blood loss during colon cancer surgery for long-term survival: an epidemiological study based on a population based register. Ann Surg. 2012;255:1126-1128

30. Sugarbaker PH, Yonemura Y. Clinical pathway for the management of resectable gastric cancer with peritoneal seeding: best palliation with a ray of hope for cure. Oncology. 2000;58:96-107