Endometrial cancer is the most common gynecological malignancy worldwide and represents the eighth leading cause of cancer related death in women. Type 1 endometrial carcinoma are characterized by positive nuclear estrogen receptor (ER) expression and responsiveness to hormone stimulation. Increasing evidence indicates that prolonged estrogen exposure is associated with initiation of type 1 endometrioid cancers. Estrogen exposure results in an overall physiological response within several hours by a genomic mechanism which depends on estrogen binding to nuclear ER resulting in mRNA transcription and protein synthesis of target genes. Increasing evidence demonstrate that estrogen plays an essential role in type 1 endometrial occurrence, it was found that Protein Kinase C alpha [1], Malate dehydrogenase 2 (MDH2) [2], and Ca(2+) channel subunit alpha 1D [3], et al involve in endometrial cancer uncontrol proliferation. Consistent with others' study, we have stated that estrogen up-regulates FTO expression via activation of the PI3K/AKT and MPAK signal pathways, then further enhances endometrial cancer cell proliferation [4]. Moreover, it was found that notch signal pathway also contributes to estrogen-driven endometrial cancer cellular growth [5]. Although the great progress has been made in understanding how estrogen induces type 1 endometrial cancer, the detailed mechanism has not been revealed.

Aberrant prohibitin expression has been found in various cancer types and associates with tumorigenesis, such as breast, ovarian cancer, and gallbladder cancer [6-11]. Prohibitin has multiple roles in regulating cell biofunctions, including proliferation, mitochondrial respiration activity and aging [12]. Previously, it commonly believes that prohibitin plays an important role to suppress cancer development via inhibiting DNA synthesis [13]. Inversely, a mass of studies verify that prohibitin serve as an oncogene. Overexpression of prohibitin associates with poor prognosis in gallbladder cancer and breast cancer, moreover, it also promotes cancer proliferation and invasion. However, rare information can be available about the role of prohibitin in endometrial cancer development, especially in entrogen-driven proliferation. He B et. al has demonstrated that prohibitin is an estrogen-regulated gene in vitro and vivo, and its expression is induced by estrogen in the uterus [14]. Similar result has been observed in white adipose tissue and liver, and the estrogen-elevated prohibitin may mediated by estrogen receptor [15]. These results suggest that prohibtin involves in estrogen signaling.

The pcDNA-ERɑ plasmid was kindly provided by Dr. Xiaoyue Chen (Department of Obstetrics and Gynecology, Shanghai First Maternity and Infant Hospital, Tongji University School of Medicine). siPHB was purchased from Shanghai GenePharma Co., Ltd. The pcDNA-ERɑ plasmid was transfected in to ishikawa cells in the presence of Lipofectamine™ 3000 transfection reagent (Invitrogen, Carlsbad, CA, USA). Whereas prohibitin small interfering RNA was transfected in to ishikawa cells with hiperfect reagent. The siControl siRNA served as a transfection control. The overexpressing effect of pcDNA-ERɑ or knockdown efficiency of the siRNA were examined by immnuoblotting.

68 cases were enrolled in this study, which comprised 32 benign endometrial tissues and 36 cases of endometrial carcinoma. All the specimens were obtained from the Department of Obstetrics and Gynecology of the Shanghai General Hospital affiliated to Shanghai Jiao Tong University. None of patients in the study had a history of prior radiotherapy or chemotherapy. The use of these specimens was approved by the Ethics Committee of the Medical College, Shanghai Jiao Tong University, China. Pathological diagnoses of endometrial samples were made by two specialized gynecological pathologists based on the World Health Organization (WHO) classification for endometrial cancer in a double-blinded manner. IHC staining was performed as previous described. The sections were incubated with primary antibody against prohibitin (diluted to 1:100; Sigma, St. Louis, MO, USA ). The IHC scores were evaluated as previous described [4].

Total RNA were extracted and reverse transcribed as previously described [4]. Primers for prohibitin and GAPDH genes were synthesized by Invitrogen Bioengineering Corporation (Shanghai, China) (Table 1). The reactions of real time PCR were set up with 10 μl SYBR Green PCR Master Mix (Takara, Shuzo, Kyoto, Japan), 1.0μl 10μM primer mixture, and 2μl cDNA template. The PCR conditions were 95ºC for 5 min, followed by 35 cycles of 94ºC for 1 min, 61ºC for 30 s and 72ºC for 45 s. GAPDH serves as a control to normalize the expression of prohibitin gene. Each real time PCR experiment was repeated three times and a mean value was use for the determination of mRNA levels. The template replaced with water used as a negative control.

Sequences of primers used for amplification of target genes

Ishikawa cells were seeded into 96-well plates at a concentration of 10X104 /ml. After overnight starvation in Opti-MEM medium, various treatments have been performed, and the cells were incubated another 48 hrs. The plates were then routinely processed with SRB staining as previously described [18, 19].

Western blotting was performed as previously reported [4, 19]. Briefly, ishikawa cells with indicated treatments were harvested and lysised with RAPA buffer, after determination of the protein concentration, proteins (50μg) was loaded and separated by SDS-PAGE. After transferring to PVDF membranes, proteins were detected using specific antibodies. Each experiment was repeated at least three times. 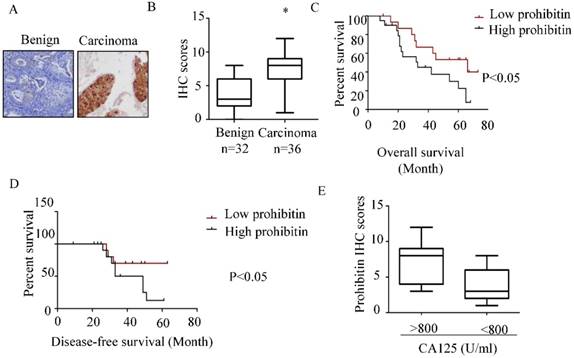 Ishikawa cells were treated with DMSO or estrogen, respectively. The cells were harvested, lysed and boiled in a buffer containing 2% SDS, 150 mM NaCl, 10 mM Tris-HCl, and 1mM DTT. The lysates incubated with beads and probihitin antibody overnight at 4ºC. Immunoprecipitated proteins were analyzed by Western blotting using an anti-Ub antibody.

Prohibitin overexpresses in endometrial cancer and associates with poor prognosis

The expression of prohibitin in distinct tissue types 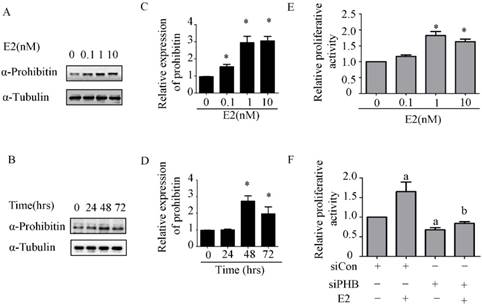 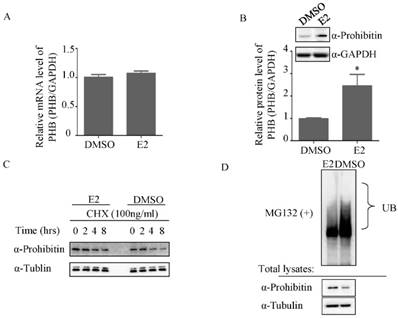 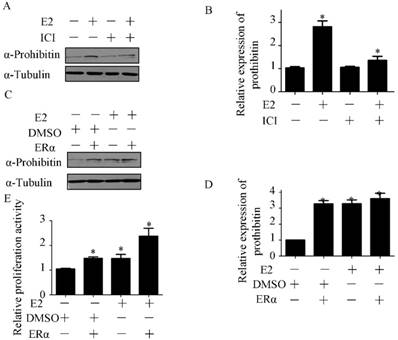 This study was funded by the National Natural Science Foundation of China [grant numbers 81302255].

BY and RYC performed the experiments and wrote the manuscript; XYL, JYS, XMW contributed to the data analysis; ZBZ and XC revised the manuscript, and all authors have read and approved the final version of the manuscript.

26. Chan S. A review of selective estrogen receptor modulators in the treatment of breast and endometrial cancer. Semin Oncol. 2002;29:129-33