With identification of 4292,000 new cases, and 2814,000 cancer related deaths in the year 2015, lung cancer remains the most common malignant tumor type and the leading cause of cancer deaths in China [1]. Based on different biological and morphological characteristics, lung cancer is categorized into two major types; Small cell lung cancer (SCLC) and non-small cell lung cancer (NSCLC). Among these, SCLC accounts for approximately 15% of all lung cancers [2], and is typically characterized by its highly aggressive nature and early tendency to distant metastasis [3]. The Veteran Affairs Lung Study Group (VALSG) classification further categorized SCLC patients into limited stage (LS) and extensive stage (ES) [4]. Unfortunately, due to the development of frequent chemotherapeutic resistance, most LS-SCLC patients, and nearly all ES-SCLC patients, suffer from recurrence and progression, and subsequently result in their poor prognosis [5, 6]. Moreover, due to existence of heterogeneity and variable clinical characteristics, the SCLC prognosis can vary among different patients. Therefore, it is critical and necessary to find an appropriate individual stratified variable, which can help to guide better anti-tumor and palliative treatment options in SCLC patients.

It is widely recognized that variations in patient prognosis in cancer are not solely determined by tumor characteristics, but patient-response factors also play an important role [7]. Over the years, it has increasingly been evident that cancer-associated inflammation, especially the host systemic inflammation response, show close association with disease development and progression, along with patient survival in cancers [8, 9]. Concurrently, the levels of acute-phase proteins, like C-reactive protein (CRP) and albumin (ALB) are assessed in the plasma to evaluate the degree of systemic inflammation [10]. In addition, multiple studies have also demonstrated about the prognostic power of these factors in variety of cancers, independent of disease stage, performance status and clinical characteristics [11]. Besides, some cellular components of the inflammatory response, including lymphocytes and neutrophils, have also been reported to depict predictive value in the outcome of patients with malignant tumors [12, 13].

Interestingly, it was realized early on that combining these factors into some kind of systemic inflammatory based scores, can greatly help to develop some independent prognostic value. Among them, modified Glasgow Prognostic Score (mGPS), which consist of CRP and ALB concentrations, was regarded as a prominent prognostic factor in most cancers [14]. Also, the prognostic nutritional index (PNI), calculated based on albumin level and total lymphocyte count, was also effective at predicting overall survival [15]. Similarly, neutrophil-to-lymphocyte ratio (NLR) was also noticed to be beneficial in predicting the survival in solid tumors [16].

Patients with histologically confirmed SCLC, between January 2006 and December 2011, at Sun Yat-sen University Cancer Center, were included in our study. Other eligible selection criteria were as follows: (a) patients displaying Eastern Cooperative Oncology Group performance status (PS) of 2 or less; (b) are older than 18 years; (c) had available pre-treatment laboratory data, consisting of CRP and ALB levels, along with lymphocyte and neutrophil counts; (d) displayed normal liver function; and (e) had sufficient clinical information. However, the patients were excluded if they; (a) had other types of cancers; (b) had liver disease; (c) had clinical evidence of infection; and (e) had autoimmune disease. The written informed consent was obtained from each patient before the start of study.

Biomarkers and other variables

The PNI was calculated as follows [25]:

The ALI was calculated with the following formula [26]:

The information about other baseline clinical characteristics, consisting of demographic information, performance status (PS), smoking status, body mass index (BMI), cancer stage and therapeutic information, was also collected. The smokers were defined as patients who had more than 100 cigarettes. The SCLC staging was determined according to VALG staging system.

The most frequent chemotherapy administered to the patients consisted of platinum plus etoposide, on day 1 through 3, for 4 or 6 cycles, after every 3 weeks. Some patients even received thorax radiotherapy (TRT) along with chemotherapy. Furthermore, several patients subsequently underwent prophylactic cranial irradiation (PCI).

All the enrolled patients were carefully assessed for therapy response after every two cycles of treatment, using dynamic computed tomography (CT) scan. After completion of the anti-tumor treatment, patients received CT scan every 2 months thereafter, or at the time when any symptoms of possible progression were observed. Tumor response evaluation was carried out according to Response Evaluation Criteria in Solid Tumors (RECIST) version 1.1. Patient overall survival (OS) was defined as the period from the time of pathological diagnosis to the date of death for any cause or last follow-up. Patients who didn't die at the date of cutoff were censored, and the last follow-up date was December 2017.

A total of 591 SCLC diagnosed patients were reviewed at our center, and among them 46 patients did not have any baseline data about patient height or weight, while 94 patients had no information about pre-treatment CRP levels. Therefore, only 451 eligible SCLC patients were included for further analysis in our study (Figure 1). 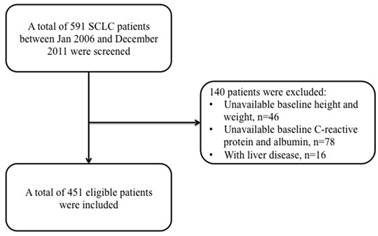 As independent prognostic values of CRP and ALB have been shown above, through both univariate and multivariate analyses, we next tried to explore the potential predictive power of systemic inflammation-based prognostic scores calculated based on CRP and/or ALB levels.

Basic characteristic of all patients and univariate survival analysis

Finally, to compare the prognostic power of these systemic inflammation-based prognostic scores, we performed survival analysis based on cancer stage stratification. Our data showed that prognostic values of mGPS (P<0.001), AGR (P<0.001), PNI (P=0.001) and ALI (P<0.001) had significant association with patients at extension stage, but not at limited stage (P=0.092, P=0.171 and P=0.620, respectively). In contrast, the association between CRP/ALB and OS was noted in both extensive (P=0.013) and limited stage (P=0.005) patients (Figure 4). In addition, we also performed ROC curve analysis, and compared the AUC values to evaluate the differentiation ability of each systemic inflammation-based prognostic score. The CRP/ALB score displayed higher AUC value in comparison to mGPS, AGR, PNI, and ALI scores (Figure 5) (P=0.023).

The links between systemic inflammation and cancer have been explored widely for decades, because epidemiological observation have indicated that inflammatory markers are evident in the tumor microenvironment, and tumors are frequently formed at the sites of chronic inflammation [28]. Recent studies have clearly suggested about the obvious relationships between systemic inflammatory response markers and tumor patients poor outcome [29, 30]. More specifically, our study also confirmed the link of C-reactive protein and hypoalbuminemia with SCLC patient survival, but the molecular mechanism of their role is still not elucidated.

Importantly, our study established that in comparison to the cellular components of white cell counts (lymphocyte and neutrophil), the acute phase proteins (C-reactive protein and albumin) consistently have independent prognostic value. This would mean that markers like mGPS, CRP/ALB and AGR, which were calculated based on C-reactive protein and albumin levels, were definitely superior to those cellular components, including PNI and ALI, in predicting SCLC patient's survival. We believe that our study is the first, which offered detailed insight into systemic inflammation-based prognostic scores in SCLC patients. 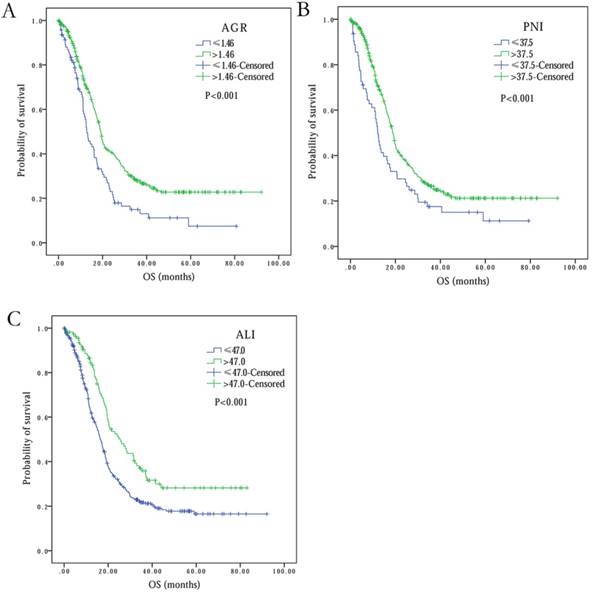 Kaplan-Meier survival curves comparing SCLC patients with CRP/ALB≤0.44 vs. CRP/ALB>0.44 in different stages: (A) in extensive stage, (B) in limited stage.

Comparison of the areas under the receiver operating curves for outcome prediction among the prognostic scores: CRP/ALB, mGPS, AGR, PNI and PS. 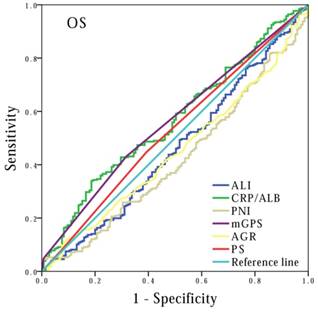 The CRP/ALB ratio was calculated based on the laboratory measurement of CRP and albumin levels. Some studies have revealed that SCLC patients have higher levels of CRP in comparison to non-malignant subjects, and show association with worse patient outcome [34, 35]. Albumin is often considered as a marker for nutritional status of patients in clinic [36], and recent studies have indicated that low baseline albumin levels not only have strong relationship with tumor progression, but also with poor overall survival in lung cancer [37, 38]. However, the biological mechanism of association between CRP, albumin and increased risk of cancer development is not clear. In this context, it is first hypothesized that CRP increase and albumin decrease is probably regulated by proinflammatory cytokines, especially interleukin (IL)-6 and IL-1. These cytokines are also crucial for neoangiogenesis and disease progression, and thus are significantly associated with the increasing risk of lung cancer development [39, 40]. Second, an elevated CRP and reduced albumin levels correlates with increase in weight loss, fatigue and lean tissue, thereby probably resulting in poor performance status and survival in various cancer types [41, 42].

The study by Temel et al. has highlighted the importance of clinicians, in deciding which patients will receive subsequent therapy, and who would receive only palliative care [44]. In fact the clinicians are the one who will make decision about the quality of life and anti-tumor therapy administration in cancer patients. Thus, they importantly need an appropriate prognostic marker, which will subsequently help them to predict between the patients response and the value of anti-tumor therapy. In this context, our study clearly suggested that CRP/ALB ratio is the marker that is powerful enough to act as prognostic score in SCLC patients. The other advantage of CRP/ALB ratio as a prognostic score is economical, as it is based only on two baseline laboratory makers, which are simple and inexpensive. Thus, it can be really helpful in improving SCLC patients stratification.

Finally, our study also has some limitations, including it being a retrospective and single center study, and thus has the potential to suffer from selection bias. However, to reduce the bias, we have recruited consecutive patients. Moreover, multivariate analysis showed CRP/ALB as an independent prognostic factor, after adjustment for other clinical characteristics. Therefore, a multi-center and large-scale prospective validation study would be essentially required to establish these findings independently.

Overall, our study concluded that systemic inflammation response makers are vital predictors of overall survival in SCLC patients. Especially, we observed that CRP/ALB ratio is not only an independent prognostic marker, but also seems to be most optimal score, among all other analyzed systemic inflammation-based prognostic scores, in terms of its predictive power of SCLC patient survival. In addition, CRP/ALB ratio appears to be cost-effective prognostic factor, and can be easily adapted in the clinical practice to stratify the patients for future clinical trials.

29. Balkwill F, Charles KA, Mantovani A. Smoldering and polarized inflammation in the initiation and promotion of malignant disease. Cancer Cell. 2005;7:211-7