Purpose: Circular RNAs (circRNAs) as prognostic biomarkers have spurred considerable interest in several types of tumors. In the present study, we aimed to elucidate the clinicopathological and prognostic values of circRNAs in human cancer.

Conclusion: Our study indicates that circRNAs may serve as important biomarkers for clinicopathologic features and prognosis in human cancer.

Circular RNA (circRNA) is a new class of endogenous non-coding RNA generated from the back-splicing by the canonical spliceosome [1]. Numerous circRNAs seem to be specifically expressed in a given cell type or developmental stage [2]. CircRNAs are characterized by a covalently closed loop structure with neither a 5' cap nor a 3' polyadenylated tail [3, 4]. Moreover, they are inherently resistant to exonucleolytic RNA decay. Taken their conserved and stable characteristics into account, circRNAs might be suitable as required novel biomarkers and therapeutic targets for human cancer [5-7]. Recent studies indicate that circRNAs might regulate transcription process and RNA splicing, function as efficient microRNA sponges, and can be translated into protein driven by N6-methyladenosine (m6A) modification [8, 9]. However, more underlying mechanisms and functions of circRNAs remain largely unknown. CircRNAs have been recently confirmed to have regulative functions in cell function, development of heart diseases, and pathogenesis of neurodegenerative diseases such as Alzheimer's disease [10]. Cancer is a major public health problem worldwide [11, 12]. The function of upregulated or downregulated circRNAs in various cancer types still require further investigation.

In this study, we performed a meta-analysis to summarize the clinicopathological and prognostic values of circRNAs in different types of cancer. Further prospective studies including more kinds of circRNAs in various tumors are warranted in the future.

A computerized literature search was performed in the PubMed Central (PMC), PubMed, Web of Science, EMBASE, Scopus, CBM and the Cochrane Library databases up to Nov 29, 2018. A search strategy was developed based on the following terms: (“circRNA” or “circular RNA”) and (“cancer” or “carcinoma” or “tumor” or “tumour” or “neoplas*”). We additionally hand-searched the references of relevant articles and contacted investigators of certain studies when necessary. To be eligible for inclusion in the meta-analysis, a study must meet the following criteria: (1) case-control study or cohort study; (2) patients had a pathological diagnosis of cancer; (3) assessing the association between circRNA expression, clinicopathological features, and prognosis. Exclusion criteria were as follows: (1) literatures not pertinent to circRNA or cancer; or (2) similar studies from the same author as well as multiple duplicate data in the different works; or (3) animal experiments, case reports, correspondences, reviews, expert opinions, letters; or (4) no available data and the authors could not be contacted.

Two investigators (XH, ZCZ) evaluated the eligibility of all retrieved studies and extracted the relevant data independently. Extracted databases were then cross-checked between the two authors to rule out any discrepancy. Disagreement was resolved by consulting with a third investigator (ZWS). The following data of each collected studies were extracted independently: author, year of publication, circRNA type, cancer type, cases, detection method, role of circRNA and duration of follow-up. The study quality was assessed in accordance with the Newcastle-Ottawa Scale (NOS) (Supplementary Table S1). Eight items were extracted, and each item scored 1. The total scores ranged from 0 to 8. If the scores were≥7, then the study was considered high quality. Our investigation process was in accordance with the Preferred Reporting Items for Systematic Reviews and Meta-Analyses (PRISMA) statement.

The statistical analysis was performed using STATA 14. Pooled odds ratios (ORs) and 95% confidence intervals (CIs) were used to assess clinicopathological parameters, and hazard ratios (HRs) and 95% CIs to estimate overall survival (OS). The between-study heterogeneity was evaluated by using the chi-square test and the I2 statistic. An I2 value of >50% of the I2 statistic was considered to indicate significant heterogeneity [13]. When a significant heterogeneity existed across the included studies, a random effects model was used for the analysis. Otherwise, the fixed effects model was used [14]. Subgroup analyses were performed to detect the source of heterogeneity. We further conducted sensitivity analyses to substantiate the stability of results and detect the potential source of heterogeneity. Publication bias was evaluated qualitatively by inspecting funnel plots and quantitatively through the Begg's and Egger's test. A two-tailed P-value<0.05 implies a statistically significant publication bias.

The study selection process is illustrated in Fig. 1. A total of 248 potential articles were identified from the databases search. Among these articles, 180 were excluded after abstract review, leaving 68 articles for the full-text review. In the review, 36 studies were excluded for the reasons as follows: eleven were eliminated because they were irrelevant to circRNA or cancer, twelve studies were of no relevant outcomes reported, six studies were of reviews, four studies involved non-human experiments, and three studies were excluded because of insufficient data for analysis. Finally, thirty-two studies with a total of 4529 patients that met the inclusion criteria were included in this meta-analysis.

Baseline characteristics of the included studies are presented in Table 1. The publication years of the eligible studies ranged from 2017 to 2018. Cancer types included gastric cancer (n=2), colorectal cancer (n=3), hepatocellular carcinoma (n=6), breast cancer (n=2), bladder cancer (n=5), lung cancer (n=4), osteosarcoma (n=5). The number of patients in each study ranged from 30 to 631. Additionally, the circRNA expression levels were measured by quantitative real time polymerase chain reaction (qRT-PCR). As indicated in Table 1, twenty-one circRNAs were recognized as tumor promoters and eleven were tumor suppressors. Moreover, the mean duration of follow-up ranged from 33 to 140 months. CircRNAs could serve as sponges to regulate gene expression via sequestering miRNAs. Therefore, we included corresponding miRNAs. All included studies screened out circRNAs from tumor tissues. According to the Newcastle-Ottawa Scale (NOS), the quality scores of the included trials ranged from 7 to 8, which indicated a high quality (Additional file 1).

Flowchart of the study selection process. 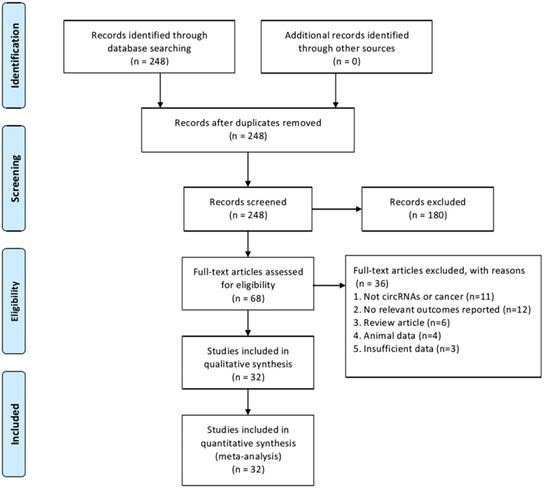 Main characteristics of the studies included in this meta-analysis.

Clinical characteristics of circRNAs in cancer.

The present study revealed a significant association between high expression of circRNAs and clinicopathological and prognostic significance in human cancer. Thirty-two studies involving 4529 patients were incorporated into our meta-analysis. Since the expression of circRNAs were upregulated or downregulated in different cancers, we decided to recognize twenty-one circRNAs as tumor promoters and eleven as tumor suppressors and analysis them respectively. Pooled results showed that high expression of oncogenic circRNAs was significantly associated with poor clinicopathological characteristics including tumor size, TNM stage, differentiation grade, lymph node metastasis and distant metastasis. A significant association between oncogenic circRNAs and a poor prognosis was also detected in our study. Furthermore, we found that high expression of tumor-suppressor circRNAs was correlated with longer survival times and improved clinical characteristics such as tumor size and TNM stage.

Forest plots for OS according to the type of oncogenic circRNAs in cancer. 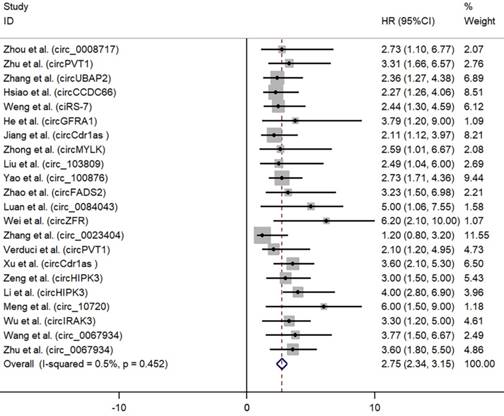 Forest plots for OS according to the type of tumor suppressor circRNAs in cancer. 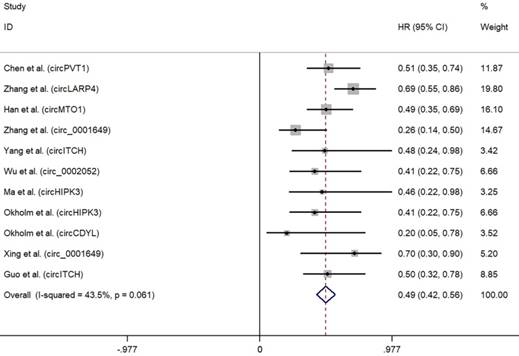 Relatively significant heterogeneities were observed in our study. To explore the source of heterogeneity, we performed sensitivity analysis and found that none of those studies altered the pooled OR significantly, indicating that other unknown factors might be the cause. Furthermore, we predicted that disease type may account for the heterogeneity and the stratified analyses were then performed. Subgroup analysis focused mainly on seven cancer types, including gastric cancer [37, 38], colorectal cancer [18, 19, 31], hepatocellular carcinoma [30, 33, 36, 39, 40, 46], bladder cancer [22, 32, 41, 44], breast cancer [20, 34], lung cancer [23-25, 35], osteosarcoma [15-17, 42, 43]. Because of only one article included for other cancer types, we failed to perform further meta-analysis. Relatively significant heterogeneities were observed in three cancer types including hepatocellular carcinoma, lung cancer and osteosarcoma (I²>50%). Small sample size and limited article included may account for the significant heterogeneity. Neither the Egger test nor the Begg's funnel plot showed significant publication bias for the association between circRNAs expression and clinicopathological and prognostic significances. Even though the results are reliable, additional relevant studies are warranted to further confirm the findings of this meta-analysis.

Four previous meta-analysis by Wang et al. [5], Ding et al. [47], Li et al. [48], and Chen et al. [49] were also performed to detect the association between circRNAs and cancer. As for Li et al., they included 10 articles about circRNAs as diagnostic biomarkers for cancer. In the study of Wang et al., they highlighted the diagnostic value of circRNAs for human cancers especially in HCC diagnosis with 17 publications. Chen et al. just focused on circRNAs as potential biomarkers for the diagnosis of digestive system malignancy. Li et al., Wang et al., and Chen et al. failed to discuss anything about the prognostic and clinicopathological significances of circRNAs. Moreover, limited studies and sample sizes were included in their studies, which decreased the reliability of conclusions. Ding et al. assessed the expression of circRNAs as a promising biomarker in the diagnosis and prognosis of cancers. However, only 11 articles were included in the prognostic meta-analysis. In our study, a computerized literature search was performed and thirty-two studies involving 4529 patients were included. Moreover, we assessed both prognostic and clinicopathological significance of circRNAs expression in cancer patients. A further subgroup analysis in different cancer types were also performed. Nevertheless, large-scale and better-designed trials are warranted to further identify the clinicopathological and prognostic significance of circRNAs expression in cancer.

Despite the promising data, some limitations still should be acknowledged. Firstly, because of limited number of studies, we failed to perform subgroup analysis in terms of different kinds of circRNAs. More circRNAs types and other aspects of cancer including chemotherapeutic susceptibility and relapse should be explored. Secondly, functional studies are needed to clarify the underlying mechanisms of circRNAs in the tumorigenesis. Thirdly, the extensive clinical application of circRNA requires further study. Moreover, the number of subjects in the included studies are relatively small, which might result in a lack of statistical power and prevent a meaningful analysis of the results. With the updating of gene chip and microarray platform technology and an explosion of circRNAs research in cancer, a significant extension of our finding and re-analysis including more patients, could be accomplished in near future. Finally, when not reported in original articles, HRs were extrapolated from the Kaplan-Meier curves or calculated from the provided data within the papers according to the method of Parmar et al. [50], which could introduce potential source of bias. However, this practice has not been shown to yield results significantly different from direct methods of HR estimation.

The present meta-analysis suggests a significant association between high expression of circRNAs and clinicopathological and prognostic significance in human cancer. Additionally, circRNAs may be promising biomarkers and therapeutic targets for cancer. Nevertheless, large-scale studies using standardized approaches are warranted to provide a new insight into the prognostic value of circRNAs.

47. Ding HX, Lv Z, Yuan Y, Xu Q. The expression of circRNAs as a promising biomarker in the diagnosis and prognosis of human cancers: a systematic review and meta-analysis. Oncotarget. 2018;9:11824-36