Background: Angiopoietin-like protein 4 (ANGPTL4) has been demonstrated highly expressed in some cancers, but it also was downregulated in others through DNA methylation. However, the expression status of ANGPTL4 in cancer of cervix remains unclear. Thus, our present study attempts to investigate the role of ANGPTL4 in the prognosis of patients with cervical cancer.

Methods: Immunohistochemistry, western blotting and qRT-PCR were performed to investigate the expressive level of ANPGTL4 in cervical cancer tissues and paired noncancer tissues. The relationship of ANGPTL4 expression and clinicopathological factors was measured by Chi-square test. Overall and disease-free survival (OS and DFS) rates were estimated and compared by using Kaplan-Meier method and log-rank test, respectively. To assess the prognostic significance of ANGPTL4 in cervical cancer patients, the Cox regression model was utilized to process univariate and multivariate analyses.

Results: ANGPTL4 was upregulated in cervical cancer samples and advanced tumor stage, deep stromal invasion, lymph node metastasis, lymphovascular space invasion, as well as poor OS and DFS were shown to be tightly correlated with it. Results of Cox multivariate analysis demonstrated that ANGPTL4 expression was an independent prognostic factor for OS and DFS in cervical cancer.

Conclusion: Upregulated ANGPTL4 seems to be a useful marker for poor prognosis in cervical cancer.

Cervical cancer is among the most common malignancy with the fourth highest incidence in global women. Annually, about 527,600 females are identified with cervical cancer and 265,700 are dead from this disease [1]. According to a recent statistic, approximately 85% of all the new cases of cervical cancer and 90% of all deaths occurred in the developing countries [1,2]. In China, the morbidity and mortality of cervical carcinoma were 7.5/100,000 and 3.4/100 000, respectively and were demonstrated to be higher than commonly developed countries [3]. Although cervical cytology, human papilloma virus screening and early preventive intervention have been broadly used in our routine early monitoring and the strategies were proved to be efficient in reducing the morbidity and mortality [4]. Approximately 15-61% of patients who have developed early-stage disease may occur metastasis and 5-year survival rate of them was only 5% [5]. Therefore, it is urgent to identify some novel biomarkers for detection of the patients with high risk of metastasis and recurrence.

ANGPTL4 (angiopoietin-like protein 4), a member of the angiopoietin-related family, was previously reported to play a crucial role in regulating angiogenesis and glucolipid metabolism [6,7]. Moreover, several previous studies have demonstrated ANGPTL4 exerted multiple even opposite effects in different types of cancerous tissues [8-14]. The upregulation of ANGPTL4 promoted tumor growth, progression, angiogenesis, invasion, metastasis and reduced overall survival [8-12]. ANGPTL4 was also indicated to influence tumor metastasis by targeting both blood vessels and corresponding tumor cells in cell lines of lung cancer and melanoma [12,13]. Moreover, in gastric cancer and urothelial carcinoma, the inhibited influence of ANGPTL4 on the tumor progression was considered as the result of epigenetic silencing by promoter methylation [15,16]. However, the clinical significance of ANGPTL4 in cervical cancer has not yet been well investigated.

In the current study, we first investigated the expression levels of ANGPTL4 in cervical cancer patients. Besides, the correlation between ANGPTL4 levels and clinicopathological characteristics or prognosis of patients with cervical cancer was also clarified.

This study was approved by the Research Ethics Committee of The Affiliated Hospital of Southwest Medical University (approval no: 2016013). Prior written consent was obtained from all the patients.

160 cervical cancer specimens and matched noncancer specimens in the neighborhood were collected from patients (IA2-IIA stage) who underwent radical hysterectomy and lymphadenectomy from February 2009 to December 2011 in The Affiliated Hospital of Southwest Medical University. No patients had received chemotherapy or radiotherapy preoperatively. Diagnosis and grading of all cervical cancers were performed following the latest International Federation of Gynecology and Obstetrics (FIGO) guidelines [2]. The fresh paired specimens were transferred into liquid nitrogen until use and paraffin-embedded samples were also obtained from the department of pathology in our hospital.

All cervical cancer patients were followed-up in person as outpatients periodically. The follow-up time was initiated at the day of surgery and terminated in December 2016 (the study closing date) or death. The patients' ages ranged from 28-68 (median, 47) years old. The median follow-up duration was 59.3 (range, 5-94) months. Overall survival (OS) and Disease-free survival (DFS) were defined as previously described [14].

Immunohistochemistry was carried out according to the protocols described in the previous study [19]. The sections were incubated overnight with the anti-ANGPTL4 antibody (1:100; Abcam, Cambridge, MA, USA) at 4°C. At last, a secondary rabbit anti-goat immunoglobulin antibody (ZSGB-Bio Ltd., Beijing, China) was added to the slides after PBS washing, and the reaction products were visualized by staining with diaminobenzidine (Dako Ltd., Glostrup, Denmark), followed by counterstaining with hematoxylin.

The protein was loaded and separated using 10% SDS-PAGE before transferred to Immobilon-P transfer membranes (PVDF). 5% milk was used for blocking the membranes, which was subsequently incubated with primary antibodies against human-ANGPTL4 (1:1000, Abcam, Cambridge, MA, USA), GAPDH (1:5000, Abcam, Cambridge, MA, USA) overnight. Then wash in TBST and probe with the secondary antibody (anti-rabbit; Proteintech Group, Inc., China). The protein expressions were visualized by enhanced chemiluminescence.

All statistical analyses were calculated by GraphPad Prism® 7.00 (GraphPad, La Jolla, Ca, USA). Associations of the clinicopathological characteristics and ANGPTL4 expression was assessed by using the chi-square test or Fisher's exact test. The Kaplan-Meier method and log-rank test were used to synthesize and compare survival curves according to ANGPTL4 expression. The significance of various parameters for survival was determined by the Cox proportional hazards model. A P value < 0.05 was treated as statistically significant; all P values were two-sided.

The association between ANGPTL4 expression and cervical cancer clinicopathological characteristics

The 160 cervical cancer patients were divided into two groups according to the median expression level of ANGPTL4 mRNA. The correlation between ANGPTL4 expression and different clinicopathological factors of cervical cancer patients was shown in Table 2. We found ANGPTL4 expression was highly correlated with FIGO stage (P = 0.006), lymphovascular space invasion (LVSI, P = 0.039), lymph node metastasis (LNM, P = 0.002) and depth of stromal invasion (P= 0.004), while it was not correlated to patient's age, tumor size, histologic grade, or parametrial extension (P > 0.05; Table 2).

Association between ANGPTL4 expression and clinicopathological characteristics in cervical cancer

ANGPTL4 is a secreted glycoprotein that regulates lipoprotein metabolism, glucose homeostasis, angiogenesis, and wound healing [21-23]. Multiple studies revealed that whether ANGPTL4 behaved as a tumor-suppressor gene or an oncogene depended on the types of cancerous tissues [22]. By binding to integrins, ANGPTL4 promotes NADPH oxidase- dependent O2- production to accelerates tumor growth, which in turn activates phosphoinositide 3- kinase/protein kinase Bα and extracellular signal- regulated kinase (ERK) pathways in an Src-dependent manner [24]. When overexpressed, it promotes neoplasm metastasis via the VCAM-1/integrin-β1 signaling pathway and upregulates metalloproteinases, bone morphogenetic protein 7, and fibronectin [9,25-27]. Moreover, its downregulation inhibits epithelial-mesenchymal transition by suppressing ERK signaling and, consequently, suppresses the proliferation, migration, and invasion of lung tumor cells [12]. In another hand, Ng et al. found fewer copies of the gene encoding ANGPTL4 was expressed in hepatocellular carcinoma tissues compared with non-tumor tissues and the tumor growth, angiogenesis, and metastasis were also suppressed when ANGPTL4 was upregulated [14]. Furthermore, methylation silencing of ANGPTL4 may promote tumor development [28]. Another study by Okochi-Takada et al. also showed that ANGPTL4 acted as a tumor suppressor and inhibited angiogenesis partly by inhibiting ERK signaling [15]. However, no reports have investigated the prognostic role of ANGPTL4 in cervical cancer. 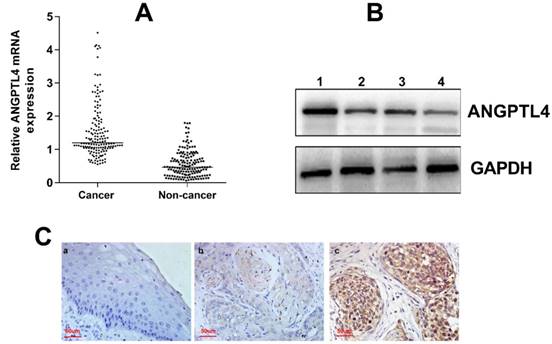 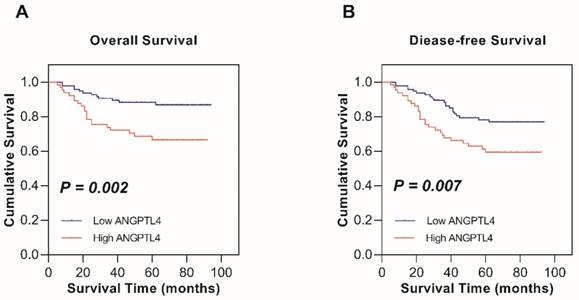 Our findings demonstrated ANGPTL4 expression was upregulated in cervical cancer tissues than in surrounded noncancer tissues. According to previous reports, important prognostic factors in cervical carcinoma included tumor diameter, histological category, LNM, depth of stromal invasion, LVSI and parametrial extension [29]. In some previous studies, ANGPTL4 expression was pointed out to be related to tumor stage, LNM, vascular invasion, depth of stromal invasion, and reduced OS in various cancers [8,10,11]. In our study, upregulation of ANGPTL4 was also shown to be tightly related to tumor stage, depth of stromal invasion, LNM besides LVSI. However, no relationship between ANGPTL4 expression and patient's age, tumor size, parametrial extension, or histological grade was identified. Kaplan-Meier analysis results demonstrated that OS and DFS were significantly decreased in cervical cancer patients with upregulation of ANGPTL4. Moreover, COX univariate and multivariate proportional hazards regression analyses further confirmed that upregulation of ANGPTL4 might act as a biomarker of poor survival for cervical cancer patients.

In conclusion, our findings suggested that ANGPTL4 could be used as a marker of poor prognosis in cervical cancer patients. Otherwise, further investigation is needed to uncover the mechanism of the action of ANGPTL4 on cervical cancer.

Z.L. and D.N. conceived and designed this study. D.N., Q.Z., L.L., and X.M. collected and analyzed the data. D.N. and Q.Z. performed experiment and wrote the manuscript. All authors approved the final manuscript.