Prevalence and Characteristics of hrHPV Infection among 414,540 Women: A Multicenter Study in Central and Eastern China

Objectives: Understanding the prevalence and characteristics of high-risk human papillomavirus (hrHPV) with the large-scale multicenter data based on a US FDA-approved testing method is important to guide ongoing vaccination programs in China.

Conclusion: In pre-vaccination period, A9 was the most dominant hrHPV group, and infections were most likely to occur at younger and older ages. The prevalence of hrHPV varied by cities and age groups, suggesting vaccination programs should be propagated in a population-specific approach.

As one of the most serious health concerns to women all around the world, cervical cancer ranks second in all diagnosed cancers in women from developing countries.[1] Almost all cases of cervical cancers are caused by persistent infection with high-risk human papillomavirus (hrHPV), including HPV types 16, 18, 31, 33, 35, 39, 45, 51, 52, 56, 58, 59, 66, and 68.[2] Early hrHPV screening of the general population is essential for early detection and intervention of CIN and cervical cancers. According to a meta-analysis that studied 1 million women with negative cytology results, the estimated global HPV prevalence was 11.7%.[3] Even though several studies have assessed the prevalence of HPV strains in mainland China,[4-10] most of them focused on HPV genotyping test approved by the National Medical Products Administration (NMPA). So far, NMPA has approved more than 100 HPV DNA test kits [11] with only five high-risk (HR) HPV DNA test kits approved by U.S. Food and Drug Administration (USFDA) since 2003. To unveil HPV prevalence patterns in central and eastern China, we recorded 480,034 tests using Cervista High-Risk HPV Assay (Hologic Inc., Bedford, Mass, USA) in eight large cities in China. Cervista HPV HR is widely used in primary cervical screening in China. It can detect the 14 types of HPV grouped according to phylogenetic relatedness, i.e., viral types with similar DNA sequences. These probe sets are A5/A6 (HPV types 51, 56, and 66), A7 (HPV types 18, 39, 45, 59, and 68), and A9 (HPV types 16, 31, 33, 35, 52, and 58).

This study was based on HPV test results obtained from 11 large hospitals located in 2 districts in central and eastern China. Three hospitals are located in the Wuhan district and eight in the Zhejiang district. (See Table S1 for more details) From October 1st, 2012 to December 31st, 2016, a total of 480,034 cervical specimens were collected at hospital-affiliated gynecological outpatient clinics and test centers. The selection criteria were as follows: (1) had a history of sexual activity; (2) were not pregnant or using vaginal medications at the time of enrolment; (3) had no history of total hysterectomy or cervical resection; (4) provided written consent to undergo HPV testing. Details on the selection process have been described by using flow chart (Figure 1). Information pertaining to HPV DNA tests was obtained from medical archives. This study was approved by the Ethical Committee of Tongji Hospital (TJ-IRB20171001), Tongji Medical College, Huazhong University of Science and Technology, Wuhan, China. The investigation procedure was carried out in accordance with the approved guidelines and the principles expressed in the Declaration of Helsinki.

Cervicovaginal swabs were collected from all participants by a gynecologist according to the standard operation procedure for sampling at the recruitment sites. Cervical specimens were collected in PreservCyt ® Solution, the ThinPrep ® Pap Test preservation system, using a broom-type device (e.g., Rovers Cervex ® Brush, Wallach Papette ® ), or Endocervical Brush/Spatula. The cervical specimens were stored at room temperature (20-30°C) in PreservCyt ® Solution prior to testing. All samples were shipped to the lab for HPV testing within 24 hours. 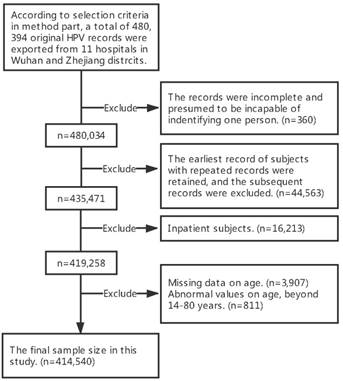 Table 3 and Figure 3A show the distribution of hrHPV infection subdivided into five age groups. In the study population, the age-specific prevalence appeared to be U-shaped with ≤19 years (28.2%, 95% CI: 25.6-30.7) and ≥50 years (21.4%, 95% CI: 21.1-21.7) groups exhibiting higher prevalence than any other age group (all Ps < 0.001, Table S3). Among hrHPV positive cases, A5/A6, A7, and A9 groups accounted for 29.4%, 25.6% and 61.7% respectively. A9 was the most common HPV group in each age group of women. The proportion of single-group infection in hrHPV positive was highest at 30-49 years (85.65%), while multiple-group was highest in the ≤19 and ≥50 years groups (25.2% and 21.1%, respectively). Age-specific hrHPV prevalence varied by regions. Women from Zhejiang district were more likely to contract hrHPV at a younger age (<30 years), while after 30 years of age, hrHPV infection was more common among women from the Wuhan district (Figure 3B). Additionally, the multiple-group infection proportion was higher in the Wuhan district than in the Zhejiang district except ≤19 years group (Figure S1).

This study depicted the prevalence of hrHPV in Central and Eastern China from 8 municipalities. These regions do not share geographical boarders, thus representing totally different regions in this large country. Among all 414,540 tests, 17.8% (73,713/ 414,540) presented hrHPV positive, while reported hrHPV prevalence among Chinese populations varied from 16.51%-30.90%.[4, 6, 7, 13, 14] It is worth noting that there are 6182 tests from women aged <21 years and 99,390 tests from women aged <30 years in the current study. In most clinical guidelines, HPV DNA testing was recommended to include co-testing with cervical cytology in screening only for women ≥30 years, while women aged <21 years are not advised to undergo cervical cancer screening.[15, 16] Therefore, most of these 99,390 tests are unruly and reflect the non-standardized cervical screening protocol in mainland China. It is necessary to regulate the specific scope of application and standard processes of HPV screening. Nevertheless, these data is valuable for tracking HPV epidemics, and its infection and immune mechanisms in teenagers. Furthermore, the lack of nationwide cervical cancer screening in China makes prophylactic vaccinations particularly important. The evidence of HPV prevalence in teenagers is essential and timely in light of the forthcoming implementation of national vaccination programs, especially for determining the optimal age for HPV vaccination in China.

Prevalence of hrHPV infections in 8 cities of central and eastern China: 2012-2016

a P value was calculated by Chi-Square analysis between two districts. The total number of cases with A5/A6, A7 and A9 groups is not equal to the total positive records because of one person might have more than one group infected. The data of Jiaxing Maternity and Child Health Care Hospital was excluded because the group-specific information was not available.

The prevalence of hrHPV gradually decreased from 2012 to 2016. HPV DNA testing was recommended as a triage-reflex testing to further evaluate women with an atypical squamous cells of undetermined significance (ASC-US) cytology result in 2012.[17] Primary hrHPV screening alone was recommended as an alternative to current screening method in 2015.[16] Therefore, as the notable advancement in screening strategy and laboratory testing, the use of hrHPV DNA tests were expanded. Our data also suggested that the number of tested patients involved in the study has mushroomed over time. The annual visits increased tenfold from 2013 to 2016, and the exact visit numbers were 15,443, 101,309, 152,714, and 144,171 for 2013-2016, respectively. This trend indicated that the coverage of HPV DNA tests amplified remarkably and the market share of Cervista increased over time. The observed decline could be explained by either the improvement of the quality assurance/quality control for true positive diagnosis or the mixture of primary screening samples and opportunistic samples. Furthermore, the economic development and enhanced women's health awareness might have also contributed to the increase.

A U-shaped hrHPV prevalence curve across different age groups was observed, with the prevalence peaking in the ≤19 and ≥50 age groups and staying relatively low through 20-49 years, which is consistent with the trend that has been observed in other developing countries.[3, 6, 18] The first peak of HPV infection occurred within the younger age group just after the beginning of sexual activity. Younger women are sensitive to HPV because of the immature immune protection for HPV and frequent sexual intercourse. Zhao et al. [19] conducted a multicenter survey on age of sexual debut and sexual behavior in Chinese women and concluded a trend towards earlier sexual debut and riskier sexual behaviors. The second peak appeared in the ≥50-year-old group. This trend reflected the viral persistence or reactivation of latent HPV due to higher viral loads, higher proportion of multiple-group infection and higher load of integrated HPV16 caused by physiological and immunological disorders related to hormone fluctuations during menopausal transition.[20] Since other studies have claimed that HPV incidence gradually declines with increasing age in developing countries,[3] this kind of difference may come from discrepancy in screening strategies and socioeconomic development. Nonetheless, the exact mechanisms involved in the progression of HPV prevalence require more well-designed studies for validation. 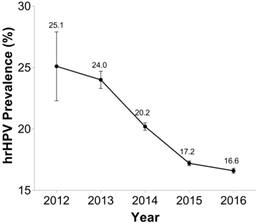 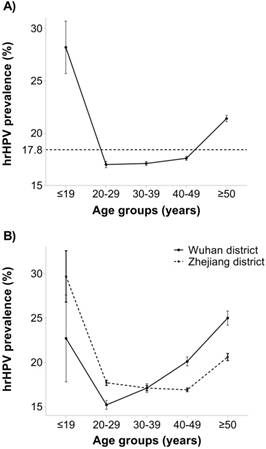 In this study, the A9 HPV group, which included HPV types of 16, 31, 33, 35, 52, and 58, accounted for 61.7% of all hrHPV positives and 11.1% of all tested people. This group was significantly greater than that of the A5/A6, A7 groups. When comparing HPV groups by age, the A9 group was the most prevalent, similar to other reports from China and other Asian regions.[4, 5, 9, 23] The A9 group had the highest proportion of women with hrHPV positive aged 40-49 years old and the lowest for ≤19 year-old women. Differences among the relative hrHPV groups infection might be related to the geographical and biological interactions between various groups, and the host immunological characteristics.[24] The infection of A9 HPV group may show the latent persistence tendency, especially for HPV type 16, the most common HPV genotype in high grade cervical intraepithelial neoplasia (CIN) and cervical cancer. A related study also proposed that using the Cervista A9 alone as the primary screening had reasonable sensitivity and specificity for CIN 2.[25]

The advent of the prophylactic HPV vaccines is a significant public health milestone.[26] However, they were previously unavailable in mainland China until the recent licensing of the bivalent HPV vaccine which covers HPV 16 and 18, and the tetravalent HPV vaccine which covers HPV 16, 18, 6, and 11. Therefore, the current study may provide necessary information for related cost-effective analysis and regional and age-oriented vaccination programs in central and eastern China. Furthermore, the Cervista HPV DNA test was approved by the US FDA and recommended for clinical use in published guidelines, which makes our data more reliable, especially with a considerable database containing nearly half a million visit counts. [15, 16, 27] On the other hand, a comprehensive characterization of the infection status quo will provide both the Chinese government and other stakeholders with the information needed to tailor screening strategies and interventions. However, this analysis of HPV infection has also encountered several potential limitations. First, due to lack of organized cervical cancer screening program in mainland China, some samples recruited in the study came from women with opportunistic cervical lesions. Secondly, the exact prevalence may be biased because of the absence of supporting cytological data and sampling of tissue specimens. Nevertheless, large amounts of data were gathered to overcome these shortcomings. Thirdly, Cervista assay cannot distinguish the exact genotypes, and failed to show the estimated genotype-specific infections. Further analysis with cytological data and tissue specimens is planned.

To the best of our knowledge, this is the largest routine clinical practice reports on HPV prevalence based on a US FDA-approved test method. These findings may help to estimate the burden of hrHPV infection overall and in different age groups, provide necessary information for cost-effective analysis and help in assessing the efficacy of vaccination programs in the future.

This work was supported by Natural Science Foundation of China (81630060, 81772775), National Basic Research Program (973 Program) from Ministry of Science and Technology of the People's Republic of China (2015CB553903), and the research-oriented clinician funding program of Tongji Medical College, Huazhong University of Science and Technology. The funders played no role in the study design, data collection and analysis, decision to publish, or preparation of the manuscript.