Conclusion: Compared to upfront intracranial RT, the salvage RT to oligo-progressive disease allowed patients getting TKI to have similar time on initial TKI and OS despite worse iPFS. The best timing of intracranial RT remains to be further verified.

Lung cancer has the highest mortality among all cancers around the world[1, 2]. The non-small cell lung cancer (NSCLC) comprises more than 80% of lung cancers, and almost 50% of NSCLC are lung adenocarcinoma[3]. About 30% of stage IV NSCLC patients present with brain metastases (BM) at the time of diagnosis[4]. The median overall survival (OS) varies from 3.0-14.8 months according to their graded prognostic assessment (GPA) scores[5]. Whole-brain radiotherapy (WBRT), stereotactic radiosurgery (SRS), or surgical resection, used alone or in combination, is the first line treatment for BM. While therapy to the brain relieves the intracranial symptom and improves the intracranial local control, it may cause neurocognitive toxicity that presents later in the course[6, 7].

The discovery of EGFR mutation introduced new treatment hope for NSCLC. The invention of EGFR-tyrosine kinase inhibitors (TKI) drastically altered the clinical evaluation and treatment options for NSCLC patients. Patients with EGFR mutation have a 50-70% risk for developing BM[8]. A few phase II clinical studies reported that single-agent EGFR-TKI showed promising results in TKI treated-naive patients. The intracranial response rate (iRR) was 75%-88%; median intracranial progression-free survival (iPFS) was 6.6-14.5 months, and median OS was 15.9-21.8 months [9-11]. Subsequently, the question is whether there is enough evidence to defer radiation therapy (RT) until the intracranial progression on TKI. Regrettably, no published phase III clinical trial answered this question. Therefore, we conducted a retrospective analysis to compare the upfront RT role in the treatment of NSCLC harboring EGFR mutation and BM.

The institutional review board at our institution approved the present study. We retrospectively reviewed NSCLC patients treated at our institution from January of 2010 to December of 2016. All patients included in this study met the following criteria: 1) histologically confirmed NSCLC; 2) EGFR-TKI sensitive mutation confirmed by polymerase chain reaction amplification (PCR); 3) MRI confirmed brain metastases; 4) treated with TKI or upfront RT concurrently with/followed by TKI; 5) complete pretreatment baseline data. The exclusion criteria included: 1) prior EGFR-TKI treatment before brain metastases; 2) no follow-up data achievable; 3) Synchronous or metachronous malignancies (except for cutaneous (non-melanomas) carcinoma, thyroid papillary carcinoma, phase I seminoma or cervical carcinoma in situ that were curatively treated).

The following variables were reviewed for analyses: date of birth, gender, smoking history, the Karnofsky Performance Score (KPS) when BM was diagnosed, histology of NSCLC, EGFR mutation type, stage, BM diagnose date, number of brain metastases, maximum size of BM, presence of BM symptom, extracranial metastases status, and the name of EGFR-TKI. The disease-specific Graded Prognostic Assessment (ds-GPA) was calculated according to the published study[5]. The intracranial lesions were evaluated every three months by magnetic resonance imaging (MRI), and the primary lesion and other metastasis sites were monitored by computed tomography (CT) or positron emission tomography-CT if needed every three months. The intracranial objective response rate (iORR) was evaluated using The Response Evaluation Criteria in Solid Tumors (RECIST, version 1.1) [12]. The first progression site and date were recorded with intracranial (primary BM, new lesion or both), extracranial or concurrent failure. The treatment regimens after any progression were documented. Of note, the dates patients started to receive a second-line systematic therapy (SST) were recorded. The most recent follow-up time was recorded.

The patients' characteristics and iORR in the upfront RT group and TKI alone group were compared with the χ2 test or Fisher's exact for categorical variables, and one-way analysis of variance for continuous data. The iPFS was calculated from the date of BM diagnoses to the progression of the primary metastases sites or a new intracranial lesion or both. The sPFS was derived from the date of BM diagnoses to the progress of any site, whether intracranial or extracranial. The time to SST was calculated from the date of BM diagnoses to the initiation of a second-line systematic therapy to the whole body. The OS was derived from the date of brain metastases until the date of death or censored on the last follow up. Kaplan-Meier analysis was used to estimate iPFS, systemic PFS (sPFS), time to SST and OS. The log-rank test was used to compare the data. Considering the competing risk of death to iPFS, we used univariable and multivariable Fine-Grey competing risk regression to compare the cumulative incidence rate of intracranial recurrence rate[13]. Univariable and multivariable Cox proportional hazards analysis examined factors associated with increased risk of death. Significance for inclusion in the multivariate model was set at p < 0.10 and p < 0.05 as a significant predictor of outcomes. Statistical analyses were performed using STATA 14 (Stata, College Station, TX). 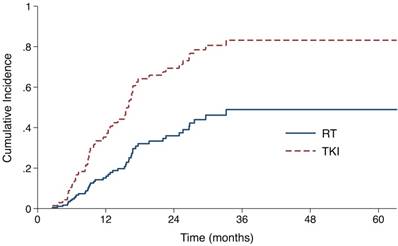 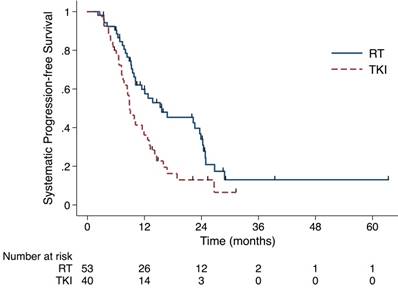 In order to analyze the reason why prolonged iPFS and sPFS failed to benefit the OS in the RT group, we looked into the salvage radiotherapy after the first progression and the length of time that patients stayed in initial TKI. For patients in the RT group, 9 out of 36 (25%) received salvage RT. Among 10 patients experienced intracranial failure as first failure, 5 (50%) patients received intracranial salvage RT. There were 3 and 1 patients got extracranial and simultaneous salvage RT, respectively. For patients in the TKI group, 16 out of 34 (47.1%) patients got salvage RT to failure sites. 12 out of 14 (85.7%) patients who experienced intracranial failure as the first failure received intracranial salvage RT. Also, 1 patient received simultaneous RT salvage, and 3 got extracranial salvage RT. Until the last follow-up, 31 (58.5%) patients in the upfront RT group changed to SST and 83.9% (26/31) of them due to extracranial or both progressions. The corresponding number in the TKI group was 26 (65.0%) and 84.6% (22/26). The median time from BM diagnosis to SST did not differ significantly between upfront RT group (median time, 23.6 months, 95% CI 22.0-25.3 months) and TKI group (median time, 18.9 months, 95% CI 8.4-29.3 months) (P=0.862, Figure 3B).

Compared to the TKI group, we found that the upfront RT significantly lowered the probability of intracranial progression with SHR 0.38 (P=0.006). However, the prolonged iPFS did not translate to the benefit of OS and time to SST. Our data showed that the salvage RT for the oligo-progression of EGFR-TKI significantly prolonged the time patients stayed in initial TKI. Even though the patients in the TKI group had poor iPFS, the salvage RT to the intracranial failure sites helped them get to the similar time to SST and OS compared to the RT group. Some retrospective studies showed the same salvage RT effectiveness. Yu et al. reported that patients with acquired resistance to TKI therapy achieved the PFS with 10 months and time to SST with 22 months after receiving local treatment to their oligo-progression sites[14]. Qiu et al. demonstrated that forty-six patients with oligo-progressive stage III-IV NSCLC after TKI benefited from the local therapy and continued TKI with another seven months[15]. A retrospective matched-cohort study comparing patients with oligo-progressive stage IV NSCLC showed better PFS (7.0 versus 4.1 months) and OS (28.2 versus 14.7 months) in patients receiving radiotherapy compared to patients changing to chemotherapy[16]. Hence, prospective clinical trials examining the efficacy of upfront RT and salvage RT on NSCLC with EGFR mutation and BM are needed. 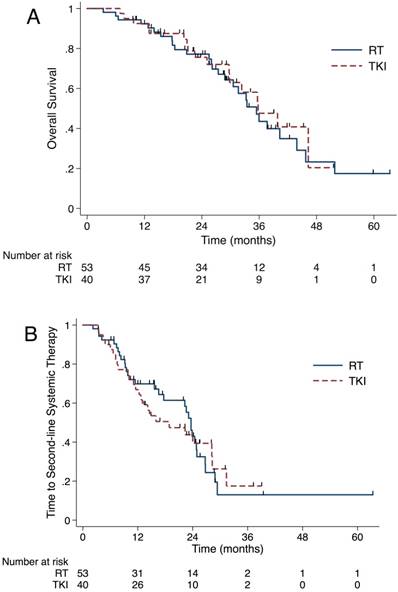 A few other studies also focused on the role of RT combined with TKI as upfront therapy. A retrospective study including 351 patients compared the role of SRS+TKI (n=100), WBRT+TKI (n=120) and TKI alone (n=131) in the effectiveness of iPFS and OS[17]. It is not surprising that the patients in the SRS group had the most extended OS due to their best baseline characteristics. However, their study demonstrated that patients treated with WBRT had a trend for a lower cumulative incidence of intracranial progression (P=0.062) and significantly better OS (P=0.039). As to patients' characteristics, only 22% of patients in WBRT groups had extracranial metastases at the time of brain metastases. Compared to our data that 55% of patients in the RT group had extracranial metastases, the lower extracranial tumor burden in this study might help the benefit from iPFS transformed to OS. What's more, 76% of the 351 patients in this study received second-line systemic therapy right after disease progression in the last follow-up. There was no chance for salvage RT to prolong the time on initial TKI, which might be another reason that the benefit of iPFS can be transformed to OS. Jiang et al. demonstrated adding upfront WBRT to TKI compared to TKI alone didn't prolong the iPFS or OS in a retrospective study[18]. In their study, 65.9% of patients had more than 10 brain metastases and 60.0% of patients have extracranial metastases at the baseline. Compared to the previous study, the much more massive intracranial and extracranial tumor burden probably hid the benefit of iPFS from RT. A meta-analysis, which also included the above two studies, demonstrated the upfront RT helped to prolong the iPFS and OS in the same scenario[19]. It should be acknowledged that all the studies included were retrospective studies and few of them considered the role of salvage RT.

In our study, we found that the use of second-line osimertinib was the only protective factor to OS (HR 0.28, 95%CI 0.10 to 0.78). It is known that osimertinib is the standard regimen in patients whose disease had progressed during first-line EGFR-TKI therapy with T790M-positive advanced NSCLC, including those with CNS metastases[20]. Osimertinib demonstrated greater penetration of the mouse blood-brain barrier than gefitinib or afatinib[21]. In the FLAURA trial, osimertinib showed benefit on PFS in patients with central nervous system metastases with median PFS 15.2 months (95% CI 12.1-21.4 months) over standard EGFR-TKIs with median PFS 9.6 months (95% CI 7.0-12.4 months) (P <0.001)[22]. In the era that osimertinib used as the first line TKI, the role of upfront RT needs more clinical evidence to illustrate.

Although our study shed some lights on the role of upfront RT and salvage local therapy in treating EGFR mutant NSCLC with BM, several limitations should be taken into account. First, this is a retrospective study that has inherent biases despite our effort to narrow down our inclusion criteria and small cohort size. Second, we failed to perform the propensity score-matched analysis to balance the baseline of the two treatment groups due to the small number of patients. Last but not least, we did not account for the potential toxicities associated with local therapies and their impact on quality of life, such as functional independence and cognition.

In conclusion, upfront RT with TKI prolonged the iPFS and sPFS of the patients when compared to TKI alone. The salvage RT helped the TKI alone patients had a similar time on initial first-line TKI despite worse iPFS. Therefore, TKI alone will be recommended if close surveillance and timely salvage local therapy can be achieved. The best timing of intracranial radiotherapy on EGFR-mutant NSCLC with brain metastases patients remains to be verified by large-sample and risk-stratified prospective clinical trials.

13. Fine JP, Gray RJ. A Proportional Hazards Model for the Subdistribution of a Competing Risk. Journal of the American Statistical Association. 1999;94:496-509