Long non-coding RNAs (lncRNAs) are non-coding RNAs longer than 200 nucleotides that function as regulatory factors in many human diseases, including cancer. However, majority of lncRNAs remain to be characterized. In this study, we characterized a novel lncRNA transcript, named UNC5B antisense RNA1 (UASR1). UASR1 is 647bp in length consisting of two exons. This lncRNA is an antisense of intron 1 of unc-5 netrin receptor B (UNC5B) gene. In breast cancer tissues, UASR1 was upregulated. Ectopic expression of UASR1 promoted proliferation and clonogenic growth of breast cancer cells MCF7 and MDA-MB-231. The migration of these cells also increased as demonstrated by wound healing and transwell assays. In contrast, silencing of UASR1 suppressed cell proliferation and migration. Further studies showed that UASR1 activated AKT and AKT-mediated mTOR signaling pathway to stimulate cell proliferation and growth. In these cells, active pAKT, pTSC2, p4EBP1 and pp70S6K were increased. Taken together, our data suggest that UASR1 plays an oncogenic role in breast cancer cells through activation of the AKT/mTOR signaling pathway, being a novel RNA oncogene.

Only 1.5% of nucleic acids in human genome are used for protein encoding, but other 98.5% of the genome does not encode proteins. Some of them are for non-coding RNA transcripts longer than 200 nucleotides, called long non-coding RNAs (lncRNAs) [1, 2]. To date, it is well known that lncRNAs participate in chromatin modifications and transcriptional and translational regulation of protein-encoding genes or regulate protein function and activity through specific binding [3-5].

In tumor tissues, lncRNAs are markedly deregulated and pervasively involved in development and progression of cancers [6-8]. In breast cancer, lncRNAs are abnormally expressed and demonstrate differential expression in subtypes of tumors [9, 10]. Some lncRNAs affect the growth and development of breast cancer by regulating cell proliferation and apoptosis, and others are involved in invasion and metastasis and drug resistance of breast cancer [6]. For instance, H19 is the first lncRNA transcribed by RNA polymerase II and is expressed mainly in human embryonic cells. H19 gene is reactivated and up-regulated during tissue regeneration or tumorigenesis [11, 12]. Oncogene E2F1 is an important transcription factor, promoting cell growth and proliferation, and c-Myc is an oncogene activated in multiple tumors; both E2F1 and c-Myc are stimulating factors of H19 expression, and the H19 lncRNA functions as a downstream effector of c-Myc and E2F1 in tumor development and progression [11]. H19 may play as an oncogene or suppressor depending on tumor types [13].

HOX antisense intergenic RNA (HOTAIR) is overexpressed in multiple malignant tumors, such as breast cancer, liver cancer and colon cancer [14]. In breast cancer, HOTAIR promotes transformation of normal epithelial cells by competitively binding to the tumor suppressor BRCA1 [15, 16]. HOTAIR is upregulated in primary and metastatic breast cancer when compared to the normal breast epithelium, and the expression of HOTAIR is associated with distant metastasis and poor prognosis of patients [17]. Therefore, oncogenic HOTAIR is an independent prognostic factor in breast cancer.

Breast cancer is a leading cause of cancer death in women, and in the United States, over 266,000 new invasive breast cancer cases plus 63,000 new carcinoma in situ (CIS) are diagnosed annually, leading to more than 40,000 cancer death [18]. LncRNAs function as tumor suppressors or oncogenes in the development and progression of breast cancer [19, 20]. Several lncRNAs have been well characterized in breast cancer, such as HOTAIR and BORG [21, 22], but lncRNAs that are involved in breast cancer and their pathogenic role in disease progression remain to be fully understood. In this study, we characterized a novel oncogenic lncRNA, named UNC5B antisense RNA 1 (UASR1). This UASR1 lncRNA, encoded by a gene located at 10q22.1 chromosome, consists of two exons with 647bp in length (Gene ID: 728978). Our data demonstrated that UASR1 promoted growth and migration of breast cancer cells through activation of the AKT/mTOR signaling pathway, functioning as an oncogene in breast cancer.

Plasmid construction. For ectopic expression of UASR1, its cDNA was amplified by RT-PCR and then subcloned into the pCDH-CMV-EF1-copGFP vector (System Biosciences, Mountain View, CA). High Fidelity Phusion DNA polymerase (Thermo Fisher Scientific, FL) was used for PCR amplification, and conventional sequencing was conducted to confirm the DNA sequence. PCR primers for UASR1 subcloning were: forward, 5'-CCCTCCTCAAACACACATCC-3' and reverse, 5'-TTAAGGAAATTAAAAATACC.

Cell transfection and infection. For packaging of lentiviruses, HEK 293T cells were seeded in 10cm dishes. Cells were transfected with UASR1 expression or shRNA plasmids plus packaging plasmids REV, VSVG and GAG for 24h. Then the medium was changed and cells were continued to culture for 48 -72h to collect viral particles [24]. For infection, cells were spread at 60% of confluence and exposed to lentiviruses (MOI=1) with 1:2000 diluted Polybrene (Millipore, Billerica, MA).

Colony formation assays. Cells were harvested by trypsin and seeded in 6‑well plates (100 cells/well). The culture medium was refreshed every three days. Once colonies formed were visible, cells were rinsed twice with phosphate buffered saline (PBS) followed by fixation with 4% paraformaldehyde and staining with Giemsa for 5 min. The number of colonies was photographed and counted.

Wound healing assays. Cells were seeded in 6-well plates at 90% confluence and cultured in medium supplemented with 2% FBS. Scratches were made using a 200μl tip. Migration distance was estimated with photographs taken at each time point [26].

Western blotting. Cells were lysed in a cell lysis buffer (Roche, IN) with a protease inhibitor cocktail followed by centrifugation at 14,000 rpm for 5 min to collect soluble proteins in supernatant. Cell lysates were separated by 10~12% SDS-polyacrylamide gel electrophoresis (SDS-PAGE), transferred onto 0.22μm PVDF membranes (Millipore, CA) [28]. The membranes were incubated with an appropriate primary antibody with gentle shaking at 4˚C overnight. After incubation with a goat anti-rabbit or anti-mouse secondary antibody at 37˚C for 1h. Protein bands were visualized using an enhanced chemiluminescence.

Identification of a novel long non-coding RNA transcript UASR1. Unc-5 netrin receptor B (UNC5B) is a ligand-dependent receptor. In absence of netrins, the intracellular death domain is cleaved by caspase 3 and then combined with death associated protein kinase (DAPK) to induce cell apoptosis; however, in the presence of netrins, the death domain is not cleaved, and apoptosis is inhibited [29]. The lncRNA LOC28978 (Gene ID: 728978) is named UNC5B antisense RNA 1 (UASR1) and we investigated its function in this study. DNA sequence analyses indicated that UASR1 is located in intron 1 of UNC5B gene (Fig. 1A). The intron 1 of UNC5B gene is composed of 66,758bp and UASR1 is located at 5,164 to 4,160bp as an antisense. UASR1 RNA is 647bp in length, consisting of two exons; the intron of UASR1 gene is 358bp in length (Supplementary Figure S1).

Chromosomal location and expression of UASR1 in breast cancer tissues. (A) UASR1 chromosome localization. Data were edited from the web page https://www.ncbi.nlm.nih.gov/gene/?term=728978. (B) UASR1 expression in breast cancer tissues (n=30 pairs). Total RNA extracted from tissues was converted into cDNA for templates. UASR1 RNA levels were determined by quantitative real-time RT-PCR using the SYBR Green technology. ΔΔCt values were used to determine relative expression levels. Data are expressed as fold over the UASR1 level in the matched adjacent normal tissues. 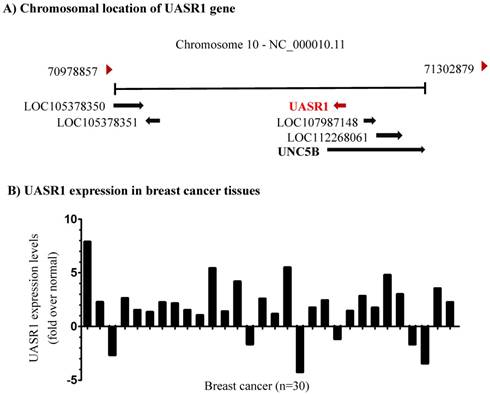 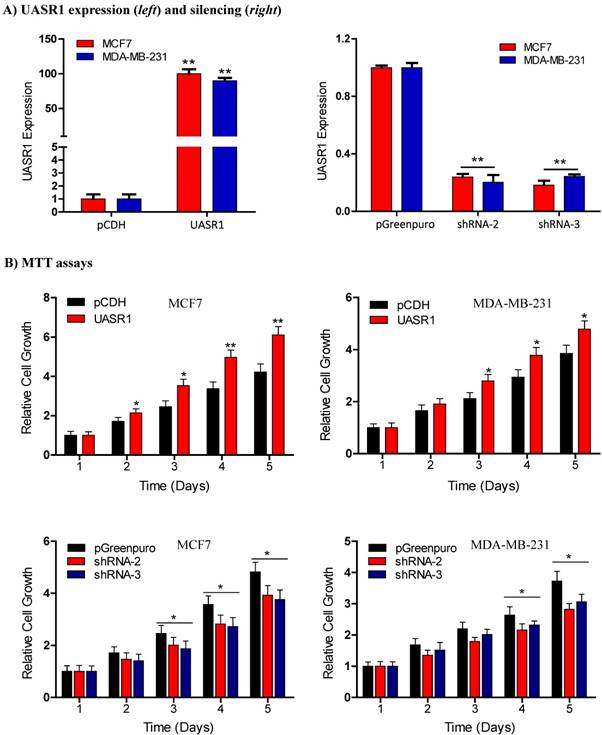 UASR1 promotes growth and proliferation of breast cancer cells. To estimate the biological function of UASR1 in breast cancer cells, we used the lentivirus system to deliver UASR1 cDNA or shRNA for targeted expression or silencing in breast cancer cells MCF7 and MDA-MB-231. Empty vectors were used as controls, and RT-qPCR was used to verify the expression of UASR1 in these cell models (Fig. 2A). We tested three UASR1 shRNAs, and our data showed that shRNA-2 and shRNA-3 effectively knocked down UASR1 expression to 20~30% in MCF7 and MDA-MB-231 cells. The shRNA-1 did not work efficiently (data not shown).

Clonogenic growth is a key feature of cancer cells. We further estimated the effect of UASR1 on clonogenicity of breast cancer cells. As shown in Fig. 3B, UASR1 expression promoted colony formation in MCF7 cells compared to the vector control. In contrast, UASR1 silencing inhibited the colonization of MCF7 cells. Together these data suggest that UASR1 promotes the cell growth and proliferation in breast cancer. 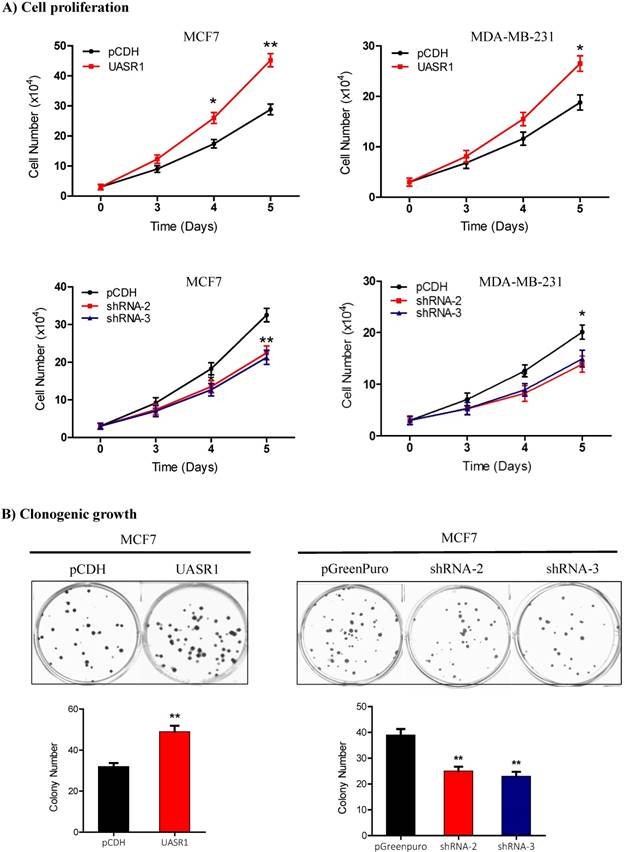 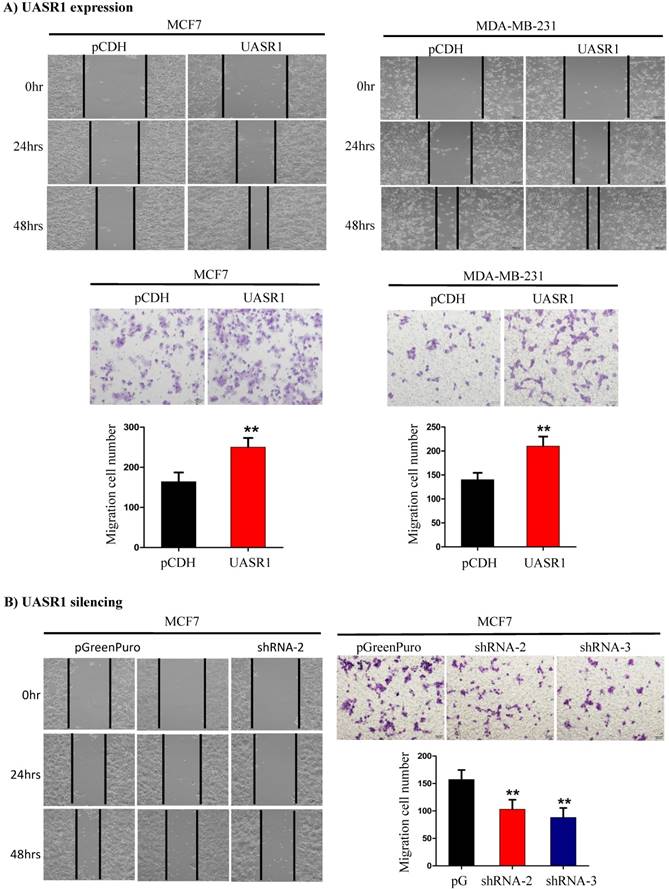 UASR1 promotes cell proliferation and migration through activation of the AKT/mTOR signaling pathway. After we determined the role of UASR1 in growth and proliferation of breast cancer, we moved forward to investigate the underlying mechanism of action. UASR1 is an antisense of UNC5B (intron 1), and thus we first estimated the effect of targeted expression of UASR1 on cellular UNC5B protein levels and neither ectopic expression nor silencing of UASR1 altered UNC5B protein levels (data not shown), indicating that UASR1 does not function via targeting UNC5B.

We thus did a broad exploration on the effect of UASR1 on major cell growth signaling pathways, such as AKT, c-Myc and ERK. As a result, UASR1 notably affected the cellular level of pAKT, but not c-Myc and pERK levels. As shown in Fig. 5A, targeted expression of UASR1 increased pAKT (Thr308 and Ser473) in MCF7 and MDA-MB-231 cells, indicating that UASR1 may regulate cell proliferation by oncogenic AKT signaling pathway. We then explored the downstream targets/effectors of AKT, and the results showed that pTSC2 and pmTOR expression was increased by UASR1 (Fig. 5A). The mTOR is an important serine-threonine protein kinase that regulates the proliferation, survival and migration of cells by activating downstream effectors 4EBP1 and p70S6K and protein translation/synthesis (33, 34). Our results showed that p-4EBP1 and p-p70S6K levels were increased by UASR1 (Fig. 5A). In contrast, UASR1 silencing led to a decrease in the pTSC2, pmTOR, p4EBP1 and pp70S6K in MCF7 cells (Fig. 5B) and MDA-MB-231 cells (Supplementary Fig. S2C). Furthermore, rapamycin (20 nM) abolished the induction of cell proliferation by UASR1 (Supplementary Fig. S3). Taken together, these results suggest that UASR1 promotes proliferation of MCF7 and MDA-MB-231 cells through control of the AKT/mTOR pathway. 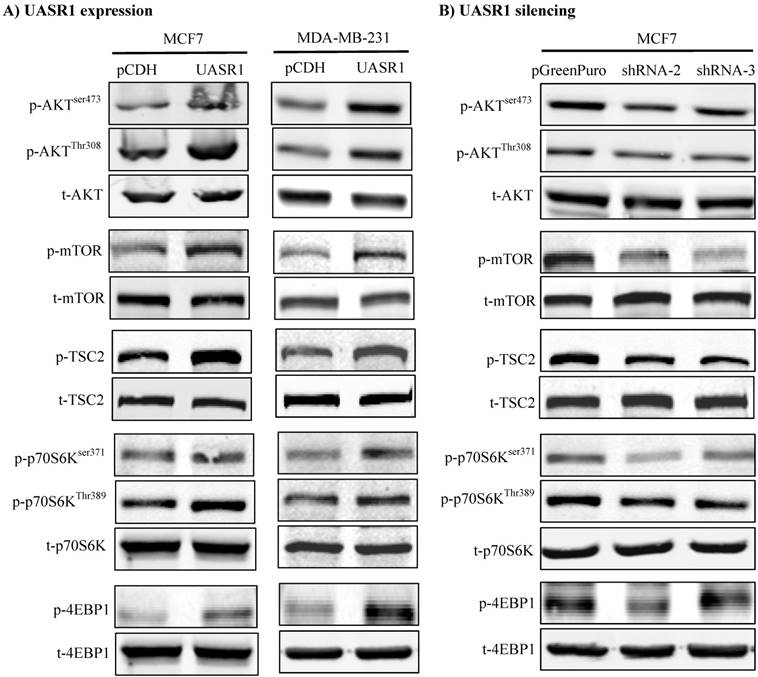 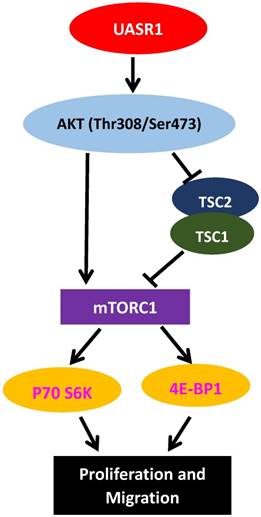 LncRNAs play an important role in tumor development and progression. Abnormal expression of lncRNAs is observed in many types of human cancers, including colorectal cancer, liver cancer, and breast cancer [30, 31]. This study characterized a new lncRNA, UASR1 located in the intron 1 of a tumor suppressor UNC5B gene in the antisense direction. UASR1 was upregulated in breast cancer and promoted growth and migration of breast cancer cells through activation of the AKT/mTOR signaling pathway.

DNA sequence analyses identified UASR1 as an antisense of the intron 1 of UNC5B gene. Targeted expression or silencing of UASR1 did not affect the expression of UNC5B. Thus UASR1 may not function through UNC5B, and we started to explore the UNC5B-independent mechanisms of action of UASR1 in breast cancer cells. LncRNAs function as a tumorigenic regulator through modulating cellular signaling networks [32]. AKT, also called protein kinase B, is a serine-threonine kinase, regulating a major oncogenic signaling in tumorigenesis [33, 34]. Activated PI3K produces second messenger PIP3 on cell membrane, which serves as a docking site through the PH domain of AKT and translocates AKT in cytoplasm to the cell membrane and in turn, 3-phosphoinositide-dependent protein kinase-1 (PDK1) catalyzes Thr308 phosphorylation of AKT. Furthermore, PDK2 phosphorylates Ser473 of AKT to make full activation of AKT. Activated AKT enters the cytoplasm or nucleus and activates or inhibits downstream effectors, such as mTOR, GSK-3β and FOXO1. Our results showed that UASR1 activated AKT with increased phosphorylation at Thr308 and Ser473, but it is currently unknown how UASR1 activates the phosphorylation of AKT. UASR1 may function as an adaptor to couple AKT with kinases for phosphorylation; UASR1 may also bind to AKT and blocks phosphatases for dephosphorylation. Detailed mechanistic study is warranted.

In conclusion, this study characterized a new lncRNA, named UASR1. UASR1 was upregulated in breast cancer tissues and promoted breast cancer cell growth, proliferation, wound healing and migration through activation of the AKT/mTOR signaling pathway. UASR1 plays an oncogenic role in breast cancer and be a potential target for breast cancer management.