Objective: To evaluate the efficacy of induction chemotherapy in young adults with locally advanced oral squamous cell carcinoma (OSCC) and the usefulness of ERCC1 as a prognostic indicator.

The squamous carcinoma of the oral cavity is the most prevalent form of oral malignancies, accounting for > 90% of all oral mucosal malignancies.1 Currently, wide resection and radiotherapy have been considered the gold standards for the treatment of oral squamous cell carcinoma. However, chemotherapy is recommended only for high risk patients after surgery, and the 5-year overall survival (OS) has remained at about 55% over the past three decades.2,3 Recently, induction chemotherapy with docetaxel, cisplatin and fluorouracil has been shown to be useful for nonsurgical management of patients with head and neck squamous cell carcinoma (HNSCC).4 A randomized phase III trial of induction chemotherapy in locally advanced resectable oral squamous cell carcinoma (OSCC) has also demonstrated the favorable pathologic or clinical response to cisplatin-based chemotherapy.3

The optimal treatment options depend on many factors, including the size and location of the primary tumor, cervical lymph node (CLN) status, pathological differentiation, patient's tolerance to treatment and patient's desires.3,5 The prognostic value of age has rarely been studied as oral cancers occur most commonly in middle-aged and older patients, but seldom in young individuals.6 However, recent studies have reported an increased incidence of OSCC in young adults, especially in young white women.7-9 Young adults with OSCC typically have no risk factors like tobacco use, alcohol use, and human papillomavirus infection, which are likely to be clinically and histologically distinct from other OSCCs. 10,11 However, the treatment and outcome of OSCC in young adults remain controversial. Some retrospective studies reported that the outcome and treatment option are similar in young and older OSCC patients,9,12 while some studies reported that young adults had an aggressive clinical phenotype and often required intensive multimodality treatments.13,14

In this study, we retrospectively analyzed the clinical features, treatments, and outcomes of 156 young adults with locally advanced (stage III or IVA, according to the Union for International Cancer Control (UICC) [2002]) OSCC from May 2007 to May 2017 in the 9th Hospital of Shanghai Jiaotong University, a leading center for the treatment of OSCC in China. Specifically, we aimed to (1) define the clinical features of OSCC in young adults; 15 (2) evaluate the efficacy of induction chemotherapy in young adults with locally advanced OSCC, and (3) evaluate whether ERCC1 can be a prognostic indicator of OSCC in young adults.

A total of 156 young adults with locally advanced (stage III or IVA) OSCC (87 males and 69 females aged <40 years at diagnosis) hospitalized in the 9th Hospital of Shanghai Jiaotong University from May 2007 to May 2017 were recruited for this study. The data collected included gender, age, primary site, tumor size, CLN status, therapy mode, ERCC1 expression and survival time. Patients were excluded if they were above 40 years of age, or had unresectable tumors or prior radiotherapy. The primary disease was diagnosed by biopsy. The CLN status was evaluated by clinical examination, ultrasound or radiological examination, including magnetic resonance imaging (MRI) and computed tomography. The final diagnosis was confirmed by the pathological examination after neck resection.

Of the 156 young patients, 89 received induction chemotherapy consisting of docetaxel 75 mg/m2 intravenously on day 1, followed by cisplatin 75 mg/m2 intravenously on day 1 and fluorouracil 750 mg/m2/d as a 120-h continuous intravenous infusion on days 1 through 5. Induction chemotherapy was administered every 3 weeks for two cycles, followed by radical surgery and postoperative radiotherapy. The other 76 patients received only radical resection and radiotherapy. Radical resection of the primary lesion and full neck dissection (functional or radical) with appropriate reconstruction (pedicle or free flap) were performed (Fig. 1). The safety margins of the primary lesion were 1.5 cm away from the palpable margins. However, the safety margins were 1.0 cm away from the marks made before induction chemotherapy in patients who received induction chemotherapy (Fig. 2). Radiotherapy was initiated 4 to 6 weeks after surgery. Standard conformal or intensity-modulated radiotherapy was allowed at a dose of 1.8 to 2 Gy per day, 5 days per week, for 6 weeks (54 to 60Gy in total).

A forearm flap was performed for the reconstruction of tongue. 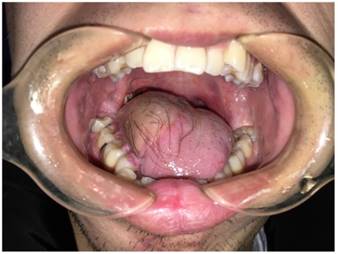 The ERCC1 expression was evaluated by immunohistochemistry using the 8F1 monoclonal antibody (1: 80 dilutions, Neomarkers, USA). A semi-quantitative H-score (intensity * expression) was calculated for ERCC1 expression. To overcome variance in pre-analytic processing, the staining intensity of the nuclei of non-neoplastic basal epithelial cells (internal control, present in all samples) was designated 2+ as previously described. The staining intensity of tumor cell nuclei was compared with the internal control on a scale of 0 to 3+, with 0 representing no staining, and 3+ representing intense staining. The percentage of cells staining for ERCC1 was assigned a weighted expression score as described previously (None=0, 1-9%=1,10-49%=2, and 50-100%=3). The H-score>=6 indicated increased ERCC1 expression, while H-score<6 indicated decreased ERCC1 expression.16,17

The marks was made 1.0 cm away from the tumor border before induction chemotherapy. 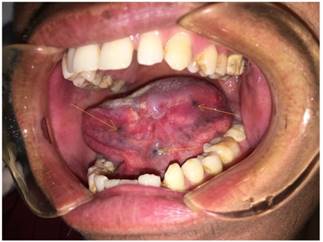 Survival was measured from the date of pathologic diagnosis, and patients still alive in May 2018 or lost in follow-up were censored. The outcome was defined by the overall survival (OS). Statistical analysis was performed using SAS 9.13. The survival rate was calculated by the Kaplan-Meier method. The prognostic variables considered in this study included gender, age, primary site, tumor size, CLN status, ERCC1 expression and therapy mode. The statistical significance of differences between survival curves was established by the log-rank test.

The clinical and epidemiological characteristics of the 156 patients were shown in Table 1. There were 87 males and 69 females with a male-to-female ratio of 1.26: 1. The mean age at presentation was 33.2 years (range: 17-40 years); and the mean follow-up was 72 months (range: 12-132 months). Lesions occurred on tongue in 146 patients, gum in 6 patients and buccal in 4 patients, respectively. The 5-year OS was 51.4% (Fig. 3), with no significant difference between genders, primary sites or T-stages. Heavy smoking was reported in only 11 male patients. Of the 18 patients received HPV testing, none showed a positive result. Three patients had a history of leukemia, and 2 patients had a history of nasopharyngeal carcinoma (NPC).

Extracapsular spread (ECS) in CLN was a poor prognostic factor

The CLN status was evaluated by clinical examination, ultrasound or radiological examination, and then confirmed by neck dissection. Ten patients who were clinically N0 before treatment had positive CLN after neck dissection, while 8 patients who had clinically positive CLN before treatment had N0 diseases at the end. There were 64 patients with N0 diseases and 92 patients (58%) with positive CLN. Of the 92 patients, ECS in CLN was found in 18 patients. These 18 patients showed the worst prognosis with a 5-year OS of only 9%; while the best prognosis was found in N0 patients, whose 5-year OS was as high as 79%. The 5-year OS of patients with positive but without ECS was 37% (Log-Rank =34.65, p<0.0001) (Fig. 4). Univariate analysis identified ECS in CLN as an independent poor prognostic factor for OS. Interestingly, of the 18 patients with ECS in CLN, 10 had a N1 stage and 8 had a N2 stage.

The overall survival of all patients. 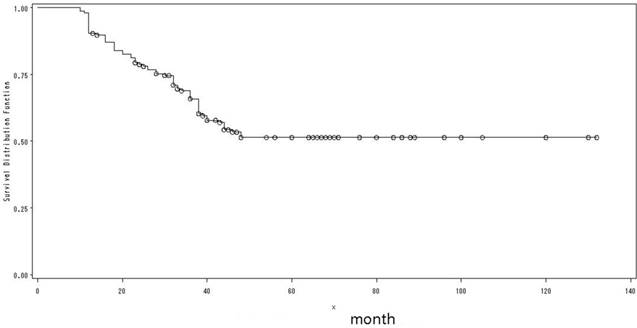 The overall survival by CLN status.

The overall survival by TNM-staging.

The overall survival of N0 patients by treatment mode.

High ERCC1 expression: the percentage of cells staining for ERCC1 was 2 points, with intense staining(3+),and the H-score>=6. 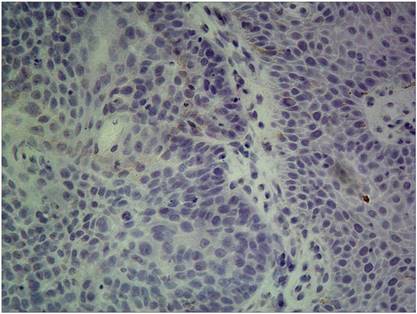 Low ERCC1 expression: the percentage of cells staining for ERCC1 was 2 points, with no staining, and the H-score=0. 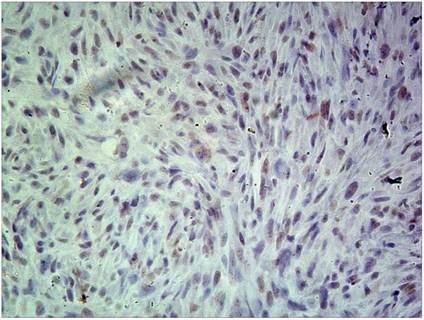 The overall survival by ERCC1 expression.

The overall survival of low ERCC1 expressions by treatment mode.

Of the 65 patients with a low ERCC1 expression, 41 received induction chemotherapy, and 24 did not (Table 2). There was a significant difference in the 5-year OS between the two groups (84.7% versus 59.1%, Log-rank=4.46, p=0.03) (Fig. 10). Multivariate analysis with the Cox proportional hazard model was used to validate the outcome, and demonstrated that induction chemotherapy was an independent prognostic factor that improving the outcome of young adults with low expression of ERCC1.

OSCC occurs predominantly in middle-aged and older individuals with a long history of tobacco or alcohol use.6,18,19 However, recent studies have reported an increased incidence of OSCC in young adults.7-9 Tobacco or alcohol use may not be the etiology of OSCC in young adults, as our study has demonstrated that only 7% (11/156) patients had heavy smoking. HPV infection, which has been thought to be a potential factor of OSCC in middle-aged and older patients, was not found in young adults with locally advanced OSCC in this study. Other possible causal factors include genetic abnormalities, oncogenic viral infections, and/or other environmental exposures.9 In our study, five patients suffered from other malignant cancers such as leukemia and NPC before the diagnosis of OSCC, which may be associated with the immunodeficiency.

In this study, we found that 10 patients who were clinically N0 before treatment had positive CLN after neck dissection. The CLN status is thought to be the most accurate predictor of OS in OSCC patients.23 Especially, the outcome is worse when ECS is present in the positive CLN.24,25 This is also supported by our results. Pinsolle et al. reported a strong relationship between clinical N classification and ECS, and ECS was present in 35% of clinical N1 patients, 55% of clinical N2 patients and 74% of clinical N3 patients, respectively.26 However, the association between clinical N classification and ECS is not confirmed in our study.

Induction chemotherapy could not improve the OS of all patients with locally advanced OSCC, but it can improve the outcome of patients with a good pathological or clinical response to chemotherapy.3 In this study, induction chemotherapy also resulted in no improvement in OS of all young patients with locally advanced OSCC, but it improved the OS of N0 patients. N0 is confirmed by neck dissection rather than the primary clinical N classification in this study. Meanwhile, the primary clinical N classification has an error with the real node status confirmed by neck dissection. Therefore, both favorable pathological or clinical response to chemotherapy and real nodes status are the results after treatment. Thus, it is critically important to identify a useful predictor biomarker for induction chemotherapy.

The study was a retrospective study, and the findings of induction chemotherapy in young adults with locally advanced OSCC and ERCC1 as a prognostic indicator must be validated in our future prospective studies.

This work was supported by Shanghai Health and Family Planning Commission [No.20154Y0057].