Conclusion: Young age at diagnosis is associated with an increased risk of LN positivity. LN examination and resection could aid younger patients more with detection and removal of metastasis. Guidelines that define postdetection interventions may be needed to limit the overtreatment of older patients, who may be vulnerable to unnecessary tests and treatments.

The evaluation of lymph nodes (LNs) is critical in staging and treatment recommendations for patients with colon cancer. The LN resection and examination could be beneficial in many cases because it can detect and remove cancers metastasis. On the other hand, overtreatment with this procedure could be harmful, because it may lead to unnecessary biopsy, surgery, and interventions, all of which have associated health risks, especially for the older patients. Although many studies have demonstrated the prognostic significance of LN examined and LN metastases in patients with colon cancer, the impact of age on LN positivity has not been well defined. Several studies revealed that the same surgical procedure on a younger patient will typically result in more LNs being examined [5, 6]. Each additional year of patient age was associated with retrieval of 0.1 fewer LNs [6]. The percentages of patients with positive LNs is also reported to be higher in the young patients compared with the old [7-9]. However, all these previous studies have failed to show a clear and robust association of age and LN positivity, independent of clinical confounders such as T stage and histological type. In this study, we performed descriptive statistics using the SEER database to investigate the impact of age on LN examined, proportion of patients with positive LNs and number of positive LNs for colon cancer patients with all stages and each T stage.

We used the SEER database from 17 population- based cancer registries, currently covering approximately 28% of the US population. Briefly, information collected includes demographics (race, sex, age at diagnosis, year of diagnosis), tumor characteristics (histological type, extension of primary tumor invasion, number of LN examined and positive for metastatic disease), and tumor location. The Ethics Board of Changzheng Hospital, the Second Military Medical determined that this study did not directly involve human participants and, therefore, did not require consent.

We identified all patients with colon cancer diagnosed between 1988 to 2013. Primary site of colon (C18.0, C18.2 - C18.9) was used. Pathologically staged patients with nonmetastatic adenocarcinoma or signet ring cell carcinoma over the age of 19 years were included. Patients with at least one LN examined were included. All patients included had standard colon cancer operations, based on the SEER coded description of surgical procedures. Local excision and local destruction procedures were excluded because of the lack of expectation of obtaining LNs. Patients with unknown T stage, surgery type, or number of positive LNs were excluded. To eliminate the effect of preoperative radiation on LN harvest and positivity, patients who received radiotherapy prior to surgery were excluded.

The primary study outcome was LN positivity. Covariates included age, number of LN examined, tumor location, year of diagnosis, tumor grade, sex, and race. In this study, age was included as a categorical variable using 10-year intervals, except for age 20 to 39 years, because of the smaller percentage of patients (1.8 %).

Differences in patient and tumor characteristics for patients with different age groups were determined using Chi-square tests. Trends in the median number of LN examined by age were estimated using quantile regression models. Trends in LN positivity with age were evaluated with Cochran Armitage trend tests and further stratified by number of LN examined (< 12 and ≥ 12). All analyses were stratified by T stage. In univariate logistic regression analyses with LN positivity as the outcome, the number of LN examined was most predictive of LN positivity as a log-transformed variable, and therefore was utilized in such a way in multivariable analyses. Logistic regression multivariable analyses were performed for each T stage, with LN positivity as the outcome and sex, race (white, black, other), year of diagnosis (1988 to 2003 and 2004 to 2013), age (10 or 20-year intervals), number of LN examined (log transformed), tumor location (4 categories), and grade (I, II, III, IV, or unknown) as covariates. The interaction of age with each covariate was assessed using the covariate-adjusted model. Results are reported as odds ratios with 95% confidence intervals using age ≥ 80 years as the reference category.

We further assessed whether age was associated with the number of positive LNs in patients with at least one positive LN using Poisson regression. Results of the Poisson regression analyses are presented as rate ratios, using age ≥ 80 years as the reference category. This provides an adjusted estimate of the ratio of the mean number of positive LNs in a specified age group relative to the age ≥ 80 years age group. Evidence of overdispersion was found in initial analysis when examining the mean and variance of the number of positive LNs. To adjust for this, confidence intervals with robust standard errors were estimated, which relaxes the assumption that the variance is equal to the mean. The interaction of age with each covariate was assessed using the covariate-adjusted model. The same variables in the logistic regression models were used for covariate adjustment. We explored this with graphical analysis of the number of LN examined as a categorical variable that indicated that the age association differed in the groups with number of LN examined < 12 vs those with ≥ 12. In the covariate-adjusted multivariable model, we accounted for the interaction by including a categorical variable for age group-LN examined group. We accounted for this interaction in the covariate-adjusted model by including a categorical variable for age-tumor location, using age ≥ 80 years as the reference group. Analyses were done using SAS statistical analysis software, version 9.4. All statistical tests were two-sided, with a 5% type I error. 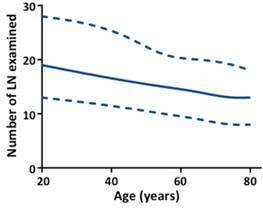 More aggressive tumor biology of younger patients could be one possible explanation for our findings. In this study, we found younger patients have more mucinous adenocarcinoma (14.0 % for age 20 to 39 and 11.3 % for age 80+) and signet ring cell carcinoma (3.1 % for age 20 to 39 and 1.2 % for age 80+). Another study also reported that there are more adenocarcinomas with mucinous and signet ring features in young patients with colorectal cancer [14]. These two histological types of colon cancer have more adverse biological features such as invasion and metastasis [15]. Until now, our knowledge regarding the detailed molecular features of sporadic young-onset colon cancer is limited. Recent studies on three major genetic pathways including chromosomal instability [16], microstatellite instability and the cytosine-phosphate-guanine island methylator phenotype pathway [17] in the development of colon cancer support the notion that it may behave more aggressively in younger patients than in older patients, and fit with our findings.

Patient and tumor characteristics by age at diagnosis

Association of age and LN positivity

Association of age and number of positive LNs in patients with at least one positive LN for all stages. (A) Mean number of positive LNs with standard deviation in different age groups; (B) Smoothed restricted cubic spline plot of the rate ratio (RR) versus age. RRs were estimated from Poisson regression models adjusting for covariates including number of LN examined, race, grade, histological type, tumor location, and year of diagnosis. The upper- and lower-most curves (dashed lines) represent the 95% CIs about the RRs (middle solid line).

For colorectal cancer, LN status is one of the most relevant factors dictating the need for adjuvant chemotherapy [18, 19]. Our findings suggest that, when adequately staged, older patients are less likely to have colon cancer with positive LNs. It has been reported that the cancer-specific survival was similar regardless of age in adequately staged patients [8, 9]. Thus, a diligent oncologic resection and pathologic LN examination may spare the older subsequent recommendation for adjuvant chemotherapy because of less LN positivity. Our study also suggests that younger patients with early-stage colon cancer may also be at an increased risk of harboring occult metastatic disease in the regional LNs. This finding may affect the preoperative workup for these patients being considered for polypectomy and local excision, as these procedures does not include LN dissection [20]. However, our study could not be interpreted as justification for a change in management of older patients. Clinical staging, typically done with CT or MRI, is not available for the patients in this dataset, thereby limiting the direct application of these data to clinical practice.

Our study has a number of strengths and novel components. First, this analysis included more recent SEER data up to 2013. We are among the first to evaluate population-based incidence trends applying the new AJCC 8th edition tumor staging to our analysis, which allowed us to add new comments on prognosis under these new guidelines. The large sample size of SEER 17 allowed for more precise risk estimates than previous studies of colon cancer that used SEER 9 to 12; this allowed us to include several potential covariates in our multivariate analysis. Our study is limited by the possibility of coding errors of the SEER database. However, any such miscoding would be expected to be random and not introduce any systematic bias [21]. Data regarding the extent of LN involvement, such as size of the LN metastases and LN capsular invasion were not available, nor were details on LN compartmental dissection. Thus, conclusions regarding extent of LN examined or exact location of the LNs cannot be drawn. The present study also has drawbacks resulting from long study interval (approximately 25 years) and retrospective nature. The operation that patients received varied depending on the year of diagnosis and other clinical factors, such as the experience and judgment of each surgeon. Most of these factors were accounted for in the multivariable analysis, but it is possible that the clinical approach to a young patient may be more aggressive than one who is older, introducing systematic bias.

In conclusion, our analysis of the most recent years of data available in the SEER database show that younger patients with colon cancer have increased rates of positive LNs, after accounting for other known predictive factors. This persists in each T stage, and young patients with at least one positive LN have higher LN ratios. Our results may guide clinicians in optimal treatment selection, considering the different aggressiveness of nodal staging in patients with different age groups. LN examination and resection could aid younger patients more with detection and removal of metastasis. Guidelines that define postdetection interventions may be needed to limit the overtreatment of older patients, who may be vulnerable to unnecessary tests and treatments. Further study is needed to identify which age-subsets of patients derive most potential benefit from current management recommendations.

This work was supported by grants from Australian National Health and Medical Research Council (APP1125794) and National Natural Science Foundation of China (81402002).