Results: This group comprised 126 females (52.7%) and 113 males (47.3%), whose ages ranged from 8 to 95 years (median 67 years). The overall survival (OS) and cancer-specific survival (CSS) rates of the entire group at 3 years were 22.6% and 23.4%, respectively. The median OS and CSS were 14.0±1.5 and 15.0±2.3 months, respectively. Multivariate analysis revealed that tumor size >10 cm, no surgery and no chemotherapy were independent risk factors of decreased OS and CSS. Radiotherapy was not significantly associated with OS or CSS.

Conclusion: Extremity soft tissue LMS patients who present with metastasis at diagnosis had a poor prognosis. Patients who performed surgery for primary tumors and chemotherapy had a better chance for prolonged survival.

Soft tissue leiomyosarcoma (LMS) is a rare malignant mesenchymal neoplasm which arises from smooth muscle [1]. LMS occur predominantly in the retroperitoneum or intraabdominal sites and is less common in the extremities. Extremity LMS comprised about 10% to 15% of extremity sarcomas, and it arose predominantly from blood vessels, with a preference for the lower limb [2-4]. Extremity LMS tend to achieve a better prognosis than uterine, retroperitoneal, and major vessel LMS [4-6]. However, patients with soft tissue sarcoma (STS) and metastasis usually have a poor prognosis, and the median survival is 12 months [7-9]. Current treatments for patients with STS include surgery, radiation and systemic chemotherapy. However, the treatment for metastatic LMS remains a challenge, as curative treatment for metastatic disease is rare.

A total of 256 patients diagnosed with extremity soft tissue LMS and metastasis at initial presentation were identified from 1973 to 2015. All patient data were obtained using the case-listing session procedure from the SEER program. This study followed standard guidelines and was approved by the local Ethics Committee.

First, the International Classification of Diseases for Oncology, 3rd edition (ICD-O-3) was used to identify patients with extremity soft tissue LMS (ICD-O-3 histologic type: 8890, 8891 and 8896; ICD-O-3 site code: C49.1 and C49.2), using the case-listing procedure. The flow chart for selection of study population was shown in Figure 1. Only patients with metastatic disease were enrolled, by reference to the tumor stage at diagnosis. LMS arising from the skeletal locations was excluded. All patient diagnoses were confirmed histologically, based either on biopsy results or the surgical specimen. Four patients diagnosed only on the basis of the clinical presentation, or according to the radiography, or unknown were excluded. Seven patients with unknown therapy were excluded. Six patients with survival time less than one month were also excluded. Data extracted from the SEER database included age, gender, year of diagnosis, location, tumor grade, tumor stage, tumor size, surgical treatment, radiation treatment, chemotherapy, cause of death, and survival time. Surgery or radiation treatment for tumors in our study refers to treatment for local primary tumors.

The SPSS statistical software (version 22.0) and Microsoft Excel 2017 were used to analyze the data. Overall survival (OS) was defined as the time from diagnosis to death from any cause, and cancer-specific survival (CSS) was defined as the time from diagnosis to death specific to the cancer-related diagnosis. Univariate analysis was performed using the Kaplan-Meier method with the log-rank test. Survival curves were generated by the Kaplan-Meier method and compared by log-rank test. Observations were censored if the patient was alive at the time of the last follow-up. Risk factors with p < 0.1 in univariate analysis were included in the multivariate analysis. Multivariate analysis was performed to determine the independent predictors of OS and CSS with Cox proportional-hazard regression analyses. The hazard ratios (HRs) and corresponding 95% confidence intervals (CIs) were calculated to show the effect of factors on OS and CSS. Differences were deemed statistically significant if the p < 0.05. 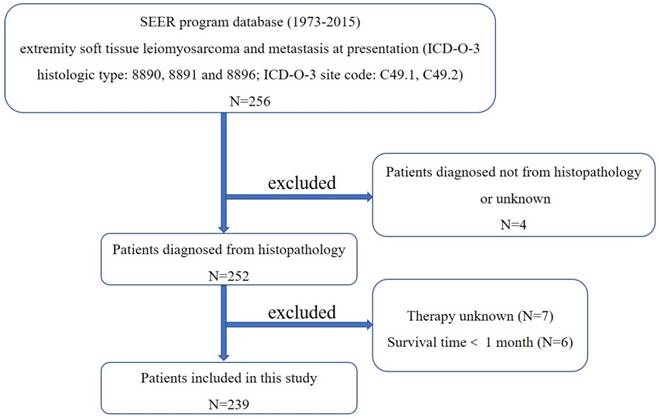 From 1973 to 2015, data for a total of 239 patients with metastatic extremity soft tissue LMS who met the inclusion criteria were collected from the SEER database. Demographic and clinical characteristics of patients are listed in Table 1.

Kaplan-Meier method estimated OS (A) and CSS (B) in patients with extremity soft tissue leiomyosarcoma and metastasis at presentation stratified by surgery.

Kaplan-Meier method estimated OS (A) and CSS (B) in patients with extremity soft tissue leiomyosarcoma and metastasis at presentation stratified by chemotherapy.

Leiomyosarcoma is one of the most common STSs, accounting for 10% - 20% of all newly diagnosed STSs [10]. Soft tissue LMS is rarely seen in the extremities, comprising about 10% - 15% of extremity sarcomas [2]. Extremity soft tissue LMS can metastasize to distant sites such as lungs, bones, and other organs at an early stage [11]. Despite intensive treatment, patients with extremity STS and metastasis usually had a poor prognosis [12-14]. Krishnan et al. [13] reported that the median survival of patients with extremity STS and metastasis at diagnosis after surgery was 22±4.1 months. The 2- and 5-year survival rates were 45.6% and 18.0%. In our study, the median OS and CSS of this cohort were 14.0±1.5 and 15.0±2.3 months, respectively. Both the 5-year OS and CSS rates of the entire cohort were 11.3%, suggesting that patients with extremity soft tissue LMS and metastasis had worse prognosis than other types.

There is a significant unmet need to improve their outcome further. Because cases of extremity soft tissue LMS and metastasis at presentation are rare, few studies have documented the prognosis of this group. Our study is the first to describe the demographic information of such patients and explore possible predictors of survival using the SEER database. The specific roles of chemotherapy and radiation treatment in this group were also explored in our study.

The mean and median age at diagnosis of our cohort was 65 and 67 years, respectively, with a similar ratio of male to female. Univariate analyses of this cohort showed that gender was not associated with significant differences in either OS or CSS, in accordance with other research results [12, 15]. The survival of patients diagnosed before 2000 years and after 2000 years had no significant difference. Many studies found age at diagnosis was significantly associated with survival in non-metastatic STSs patients [16-18]. However, our study showed that age was not an independent risk factor of either OS or CSS, a trend toward an increased OS and CSS was observed for patients with age < 60 years compared with those of age ≥ 60 years. Abraham et al. [12] also reported that age was not an independent predictor of survival in patients with somatic LMS. We found that tumor location was not associated with either OS or CSS, but patients with upper limb tumor tend to have a worse median survival (Table 2). Tumor size was recognized as one of the important predictors of LMS [14, 15, 19]. We identified tumor size >10 cm as an independent risk factor for decreased OS and CSS in metastatic extremity LMS population. Iqbal et al. [20] also reported that tumor size affected the survival in metastatic STS. Therefore, tumor size is an important prognostic factor for extremity LMS patients with or without metastasis at presentation. High histological grade is identified as an indicator of a poor prognosis in somatic LMS [12, 14]. However, in our metastatic cohort, tumor grade was not significantly associated with survival in univariate analysis, suggesting that tumor grade did not affect the survival after metastasis.

Finally, this study has several limitations. First, the SEER database does not include information about local recurrence or metastasis during follow-up, which may affect the prognosis. Second, other known prognostic factors in cancer survival such as surgery or chemotherapy procedures, were not available in this database. Despite these shortcomings, the SEER database provides important insights into rare cancers, such as extremity soft tissue LMS and metastatic disease at diagnosis.

This is the largest population-based study to describe the demographics and analyze the prognosis for 239 patients with soft tissue extremity LMS and metastasis at presentation. OS and CSS rates of the entire group at 3-year were 22.6% and 23.4%, respectively. The median OS and CSS were 14.0±1.5 and 15.0±2.3 months, respectively. Tumor size, surgery, and chemotherapy were independently associated with survival outcome. This study provides data that may help clinicians to better understand the features and estimate the prognosis of patients with metastatic extremity LMS and to provide appropriate treatment recommendations.

This work was supported by Zhejiang Provincial Natural Science Foundation (Grant no. LQ17H060003) and Science and technology benefit for people of Ningbo (Grant no. 2016C51003).

31. MacNeill AJ, Gupta A, Swallow CJ. Randomized Controlled Trials in Soft Tissue Sarcoma: We Are Getting There!. Surgical oncology clinics of North America. 2017;26:531-44