Background: Perineural invasion (PNI) and lymphovascular invasion (LVI) are associated with poor prognosis in colorectal cancer, but their clinical significance is still controversial for patients with locally advanced rectal cancer (LARC) who had received neoadjuvant chemoradiotherapy (nCRT) and surgical resection. The aim of this study was to confirm the correlation between PNI and/or LVI and clinical prognosis and to further confirm whether PNI and/or LVI can be used as potential prognostic indicators of adjuvant chemotherapy after nCRT and surgery in LARC.

Methods: From February 2002 to December 2012, a total of 181 patients with LARC who had received nCRT and surgical resection were retrospectively reviewed. Overall survival (OS) and disease-free survival (DFS) were determined by the Kaplan-Meier method, log-rank test, and Cox proportional hazard regression model.

Results: The median follow-up time was 48 months (range, 3 to 162 months). All the PNI-positive and/or LVI-positive patients showed adverse DFS and OS (P<0.001). In multivariate analysis, PNI and LVI were independent prognostic factors for DFS. PNI, rather than LVI, was also an independent prognostic factor for OS. In a subgroup analysis, PNI-positive, rather than LVI-positive, may benefit from adjuvant chemotherapy.

Conclusion: For patients with LARC undergoing nCRT and surgery, PNI-positive and/or LVI positive were associated with poorer DFS and OS. And PNI-positive, rather than LVI-positive, may benefit from adjuvant chemotherapy.

Two pathologic features that have been shown to be correlated with outcome in CRC are perineural invasion (PNI) and lymphovascular invasion (LVI). PNI is a pathologic process of tumor invasion of nervous structures, and it spreads along nerve sheaths [7]. LVI is defined as tumor cells invasion in the small lymphatic or blood vessels [8]. Studies have indicated that both of these pathologic features are the prognostic factors in rectal cancer [9-11]. Rectal cancer patients with PNI or LVI positive usually have a high incidence of local recurrence and distant metastasis [11,12]. However, the role of these two pathologic variables in predicting the prognosis of LARC patients has been still controversial. Several studies demonstrated that PNI or LVI is not related markedly to the poor prognosis after curative resection of colorectal cancers [13,14]. In this study, we retrospectively evaluated the clinical significance of PNI and LVI as indicators of adjuvant chemotherapy after nCRT and surgery in LARC.

The records of 204 consecutive patients with LARC (clinically T3-4 and/or node positive) who underwent nCRT followed by surgical resection at the Zhejiang Cancer Hospital between February 2002 and December 2012 were retrospectively reviewed. Data pertaining to demographics, staging, tumor markers, pathology, treatment, and outcomes were collected for each patient. Twelve patients were removed because metastatic cancer was found during the course of surgery. Eleven patients were excluded due to the limited follow-up information. Finally, a total of 181 patients were available for analysis. This study was approved by the Independent Ethics Committee of Zhejiang Cancer Hospital.

All patients were restaged according to the AJCC 2010 staging system. Chest, abdominal, and pelvic CT scan, pelvic MRI with contrast or endorectal ultrasound were performed for tumor, nodal, and metastasis staging. The main neoadjuvant for chemotherapy was 5-Fu or capecitabine-based chemotherapeutic regimen. A dose of 40-45 Gy radiotherapy was delivered to the whole pelvis in 1.8 Gy daily fractions, followed by a 5.4 Gy boost to the primary tumor in 3 fractions. Radical proctectomy, including abdominoperineal resection (APR), low anterior resection (LAR), and Hartmann's procedure, was performed 6 to 10 weeks after completion of nCRT. XELOX or FOLFOX6 postoperative adjuvant chemotherapeutic regimen was recommended for all patients 4 weeks after surgery. However, only 102 patients (56.4%) received adjuvant chemotherapy. Due to postoperative complications, economic problems or other reasons, the other 79 patients (43.6%) did not receive adjuvant chemotherapy.

For each patient included in this study, standard pathologic analysis by a pathologist with expertise in colorectal cancer was performed on all surgical specimens. Pathologic features, such as tumor size, tumor infiltration, number of positive lymph nodes, histologic grade, extranodal extension, PNI, LVI, as well as other features included in the standard protocol were documented. The widely accepted definition of PNI-positive is inclusive of two aspects: at least one-third of the nerve is surrounded by tumor cells without invasion of the nerve sheath (SS-PNI), as well as any of the three layers of the nerve sheath is invaded by tumor cells (TS-PNI) [15,16]. Studies have indicated that patients in the SS-PNI subgroup and TS-PNI subgroup have a similar 5-year local recurrence rate [17]. In our study, both SS-PNI and TS-PNI were defined as PNI-positive. LVI was defined as tumor invasion in the vascular and lymphatic structure. Since it is infeasible to distinguish histologically between lymphatic and venous vessels, the term LVI usually refers to any of these structures [18].

The characteristics of the 181 LARC patients are shown in Table 1. The median follow-up time was 48 months (range, 3 to 162 months). Median patient age at the time of diagnosis was 51-year-old (range, 23 to 76-year-old). In our cohort, 44 patients (24.3%) and 137 patients (75.7%) were PNI positive and PNI negative, respectively, and 26 patients (14.4%) and 155 patients (85.6%) were LVI positive and negative, respectively. There were statistically significant differences in nodal status between PNI+ and PNI- groups (P=0.033) or LVI+ and LVI- groups (P=0.020). No significant differences were observed in other demographic and treatment-related characteristics of PNI or LVI groups.

Clinical and Treatment-related Characteristics by PNI and LVI status

Pathologic Features After Neoadjuvant Chemoradiation by PNI and LVI status

Univariate analyses were performed to investigate the prognostic significance of PNI and LVI as well as other pathologic and clinical variables. As shown in Table 3, PNI or LVI positive was significantly associated with poorer DFS and OS (all P-value<0.001). In addition, patients with ypT3-4 stage had poorer DFS (P<0.001) and OS (P<0.001). Likewise, patients with positive pN status also had poorer DFS (P<0.001) and OS (P<0.001). The other variables investigated in our univariate analysis did not significantly affect the outcome.

Kaplan-Meier survival curves according to perineural (PNI) and lymphovascular invasion (LVI). (A) DFS; (B) OS. 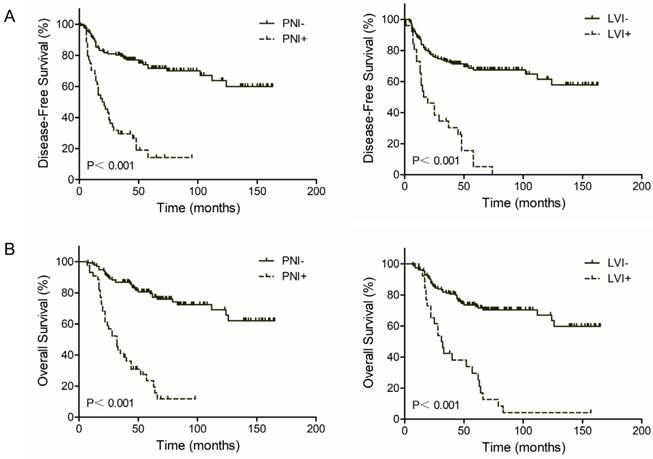 Kaplan-Meier survival curves according to PNI, LVI and adjuvant chemotherapy. (A) DFS; (B) OS. 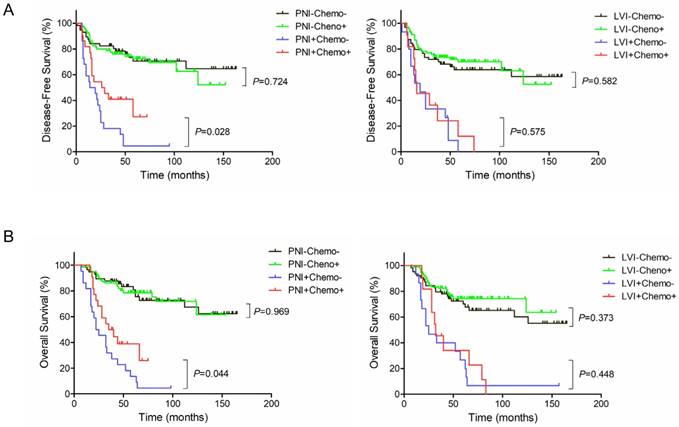 Adjuvant chemotherapy in a subgroup by PNI or LVI

In our study, we evaluated the significance of PNI and LVI as prognostic indicators in LARC after nCRT and surgery. Positive incisal margin, advanced ypT and ypN positive status were associated with PNI and LVI. Patients with PNI and/or LVI positive had a significantly higher risk of recurrence and poorer survival. Multivariate analysis indicated that PNI and LVI were independent prognostic factors of outcome in LARC patients. In addition, PNI-positive, rather than LVI-positive, may benefit from postoperative adjuvant chemotherapy.

PNI refers to tumor invasion of the space surrounding a nerve and has been investigated in many cancers, including prostate, head and neck cancer, and colorectal cancer [10,19-21]. LVI is defined as tumor invasion in the vascular and lymphatic structure. Since it is infeasible to distinguish histologically between lymphatic and venous vessels, the term LVI usually refers to any of these structures [18]. In the current study, the incidence of PNI and LVI was 24.3% and 14.4%, respectively, which is in-line with previous reports in preoperative CRT patients [22-24]. However, in untreated tumors, higher incidence of PNI and LVI of 30% and 70.6%, respectively, were reported [25,26]. In these previous studies, multivariate analysis indicated that PNI or LVI was an independent negative prognosticator of survival. However, other two studies demonstrated that PNI had an impact on the DFS, but not the OS, based on multivariate analysis [11,27]. In our univariate analysis, we found that patients with PNI-positive or LVI-positive had poorer DFS and OS. In our multivariate analysis, PNI was a significant prognosticator affecting the DFS and OS, and LVI had an impact only on the DFS. In addition, subgroup analysis showed that in PNI-positive group, postoperative adjuvant chemotherapy improved DFS and OS. However, in LVI-positive group, postoperative adjuvant chemotherapy had no impact on DFS or OS. Lower incidence of LVI or the small sample size of our study may account for these results.

In our analysis, advanced ypT and ypN stage were significant factors associated with PNI and LVI in LARC after nCRT. However, studies have indicated that LVI was not significantly associated with the pT or pN stage in rectal cancer patients after preoperative radiotherapy rather than nCRT [28]. Thus, further studies may be conducted to address this controversial problem.

The present study has certain limitations, such as its retrospective nature, and therefore, the treatment delivery could not be controlled for the heterogeneity. Furthermore, the pathologists did not evaluate the pathologic specimens independently, which might lead to a potential error of evaluating PNI and LVI. Nevertheless, clinicopathologic and survival data were collected by reviewing the record of the individual patient. All patients were received standard treatment of nCRT and TME as recommended.

In summary, our study indicated that PNI and/or LVI following nCRT were poor prognosticators, and found the survival benefit of postoperative adjuvant chemotherapy to LARC patients with PNI.