Nasopharyngeal carcinoma (NPC) is a malignant tumor originating from the nasopharyngeal epithelium. The disease occurs in the southern part of China and has apparent regional clustering, especially in Guangdong, Hong Kong and Hunan[1-5]. At present, the treatment of nasopharyngeal carcinoma is mainly based on concurrent chemo-radiotherapy[6-10]. The NCCN Guidelines recommend a standard procedure for locally advanced nasopharyngeal carcinoma to emphasize concurrent chemotherapy with single-agent cisplatin chemotherapy. However, due to the high incidence of digestive tract reaction and the ototoxicity and nephrotoxicity of cisplatin, the type and severity of adverse reactions make the patient's quality of life extremely poor[11-15]. Therefore, finding alternative chemotherapy drugs to improve the prognosis and quality of life of patients with locally advanced nasopharyngeal carcinoma has become an urgent problem to be solved. However, the traditional technological route to develop new drugs has a long cycle and is costly; therefore, the advantages of in-depth studies of approved drugs, in order to explore the full spectrum of uses or repositioning of existing drugs, have been widely recognized by the biomedical industry[16-18].

More importantly, many studies have shown that the combination of statins with different drugs can inhibit the proliferation of various tumor cells, such as prostate cancer, and promote the occurrence of apoptosis[19]. These epidemiological and clinical trial studies have shown that statins may play an essential role in the treatment of tumors. Recently, an extensive sample of epidemiological studies showed a negative correlation between cancer mortality and statin use rates, and the authors speculated that it could be used as a potential antitumor metastatic drug[20-22]. Lovastatin, which is the most widely used statin, is currently the first-line treatment for hypercholesterolemia and mixed hyperlipidemia. However, the potential of lovastatin in nasopharyngeal carcinoma treatment has not been reported. Therefore, we mainly studied the effect of lovastatin on the proliferation of nasopharyngeal carcinoma cells and explore the molecular mechanism.

The NPC cell lines 5-8F and HNE2 used in this study were preserved in our laboratory (Cancer Research Institute, Central South University). Culture conditions: Cells in RPMI1640 liquid medium containing 10% fetal bovine serum (FBS) and 1% penicillin-streptomycin were cultured in a constant temperature incubator at 37 °C with 5% CO2. The cells were spread over the bottom of the culture dish, trypsinized and passaged to reach the logarithmic growth phase for experiments.

The NPC cell lines 5-8F and HNE2 were seeded in 96-well plates at a density of 1000 cells per well. After the cells were attached to the wall, lovastatin was added: 1) the negative control group was the lovastatin-free cell group; 2) in the lovastatin drug treatment group, the final lovastatin concentrations in the wells were 20, 40, 60, 80, 100, and 120 μM, with five replicate wells in each group. Then, 20 μL of MTT (5 mg/mL) was added to the cells for 24 h, and incubation was continued for 4 h. Next, the supernatant was aspirated, and 200 μL of DMSO was added to each well. The mixture was incubated for 10 min on a shaker at room temperature, and a microplate reader was used to measure the absorbance at 490 nm. Based on the absorbance, the cell activity curves of the nasopharyngeal carcinoma cells were plotted, and the IC50 value of lovastatin was calculated.

Logarithmic-stage 5-8F and HNE2 nasopharyngeal carcinoma cells were seeded in 96-well plates at a density of 1000 cells per well. After the cells were attached to the walls, the drug was added separately: 1) the negative control group received no drug solution; 2) the lovastatin drug treatment group received a lovastatin dose at the of IC50 concentration and were treated for the following times: 0, 24, 48, 72, 96 h. Five replicate wells were set up for each group, 20 μL of MTT (5 mg/mL) was added at the end of the experiment and incubation was continued for 4 h. Next, the supernatant was aspirated, 200 μL of DMSO was added to each well, and the plates were shaken at room temperature for 10 min. A microplate reader was then used to measure the absorbance at 490 nm. The time-dependent effect of lovastatin at the IC50 concentration on cell growth inhibition was determined.

To determine the mechanism by which lovastatin works, we used the Ultimate 3000 RSLC nano system of the LTQ Orbitrap Velos Pro mass spectrometer (Thermo Scientific, Bremen, Germany) to recover proteins after lovastatin treatment for 0, 6, 12, 18, and 24 h. Total protein was subjected to proteomic analysis. The peptides were diluted with 0.1% trifluoroacetic acid (TFA) and then transferred to an analytical column; 5 μL of the sample was injected per analysis. The mass spectrometer was operated in a data-dependent mode. Full-scan MS spectra were obtained in an Orbitrap analyzer at a mass resolution of 60,000 (mass range 350-2000 m/z). For label-free analysis, the ten most abundant tandem mass spectrum peaks were obtained in a linear ion trap by peptide cleavage using collision-induced dissociation (CID). The normalized collision energy (NCE) was set to 35%, and the isolation width was 2 m/z. Proteins were identified using Proteome Discoverer software (Thermo Scientific, Waltham, MA, USA). The original Thermo file was imported and used to search in the UniProt KB / Swiss-Prot database (version 2014_02) [23, 24].

For database searches, the mass tolerances of the precursor and fragment ions were set to 10 ppm and 0.8 Da, respectively. Peptides with a false positive rate <1% (q value <0.01) were discarded. Proteins that met the following criteria were considered to be differentially expressed proteins: i) proteins identified based on ≥ 2% peptides with ≥ 95% confidence, and ii) mean change in protein ≥ 1.50 or ≤ 0.67 (Student's t-test, p < 0.05). IPA bioinformatics software was used to obtain differentially expressed proteins to determine altered signaling pathways after lovastatin treatment.

We treated 5-8F and HNE2 nasopharyngeal carcinoma cells for 48 h with lovastatin at concentrations of 20, 40, 60, 80, 100, 120 μM and measured cell viability using MTT. As shown in Figure 1A and 1B, the numbers of viable 5-8F and HNE2 cells were significantly decreased in a dose-dependent manner after lovastatin treatment, indicating that different concentrations of lovastatin have specific inhibitory effects on cell growth. It was also found that the IC50 values of lovastatin were 41.50 μM for 5-8F cells and 67.95 μM for HNE2 cells.

The time-dependence of lovastatin on nasopharyngeal carcinoma cell inhibition

To further investigate whether the inhibitory effect of lovastatin on the proliferation of nasopharyngeal carcinoma cells is time-dependent, we used the IC50 concentration obtained in Figure 1 to treat HNE2 and 5-8F cells for 24, 48, 72, and 96 h and examined the cells to obtain a survival curve. As shown in Figure 2A and 2B, as the treatment time increased, the proliferation rate of the cells decreased significantly, and there were significant differences between the different time points. It can be seen that with longer exposure times to lovastatin, the inhibitory effect on the proliferation of 5-8F cells and HNE2 cells gradually increased. These results indicated that lovastatin had a significant time-dependent effect on the inhibition of nasopharyngeal carcinoma cell proliferation.

To further explore the mechanism of how lovastatin inhibits the proliferation of nasopharyngeal carcinoma cells and to find proteins and signaling pathways related to this inhibitory effect, we used whole-proteome mass spectrometry performed at 0, 6, 12, 18, and 24 h before and after lovastatin treatment of HNE2 nasopharyngeal carcinoma cells. The ion current maps at five time points are shown in Figure 3. The results showed a significant change in the ion chromatogram of the mass spectrometry after drug treatment, suggesting a change in the relevant proteins and signaling pathways in the cells after drug treatment (Figure 3).

Lovastatin inhibits 5-8F and HNE2 nasopharyngeal carcinoma cells in a dose-dependent manner. We treated 5-8F and HNE2 nasopharyngeal carcinoma cells with lovastatin for 48 h at concentrations of 20, 40, 60, 80, 100, and 120 μM and measured cell viability with MTT. As shown in Figure 1A and 1B, the numbers of viable 5-8F and HNE2 cells were significantly decreased in a dose-dependent manner after lovastatin treatment, indicating that different concentrations of lovastatin have a specific inhibitory effects on cell growth. The IC50 values of lovastatin were 41.50 μM for the 5-8F cell line and 67.95 μM for the HNE2 cell line. 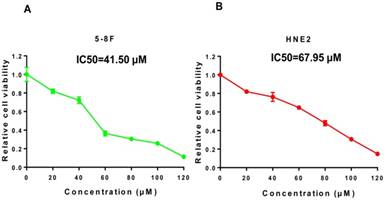 The time-dependent component on the inhibition of nasopharyngeal carcinoma cells by lovastatin. We used the IC50 concentration obtained in Figure 1 to treat HNE2 and 5-8F cells for 24, 48, 72, and 96 h and then examined the cells to obtain cell viability curves. As shown in Figure 2A and 2B, as the treatment time increased, the proliferation rate of the cells decreased significantly, and there were significant differences between the different time points. It can be seen that with prolonged lovastatin treatment, the inhibitory effect on the proliferation of 5-8F cells and HNE2 cells is gradually increased. 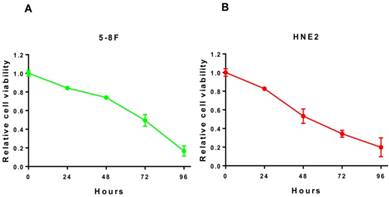 We selected proteins with specific peptides >2 and area values at five-time points for protein identification. There were 211 proteins conform our standard for lovastatin treatment after. We used GENE protein software for SOM analysis of the 211 proteins. We found that the levels of 189 proteins changed significantly after lovastatin treatment: 97 of them were upregulated and 92 were downregulated (Figure 4). 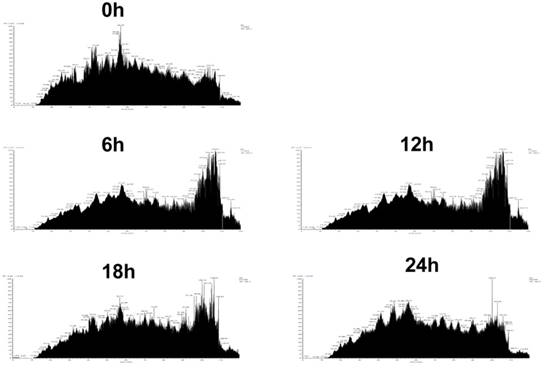 Further, we used IPA software to analyze the cellular functions regulated by these differentially regulated proteins. We found that these proteins mainly regulate cell metabolism, cell death, and apoptosis, as shown in Figure 6. The interactions between differentially regulated proteins involved in apoptosis are shown. Our results indicate that lovastatin inhibits the growth of nasopharyngeal carcinoma cells primarily by altering cellular metabolism and apoptotic pathways.

Lovastatin is a 3-hydroxy-3-methylglutaryl coenzyme A (HMG-CoA) reductase inhibitor that affects many physiological processes in the body by inhibiting the synthesis of mevalonate (MVA) and its downstream products[25, 26]. The effects of lovastatin in lowering cholesterol and improving the endocardial environment are widely applied in the treatment of hyperlipidemia and cardiovascular diseases. MVA is a precursor or substrate for many essential products such as cholesterol, polyester, coenzyme Q, farnesyl pyrophosphate (FPP), and geranyl pyrophosphate (GGPP). MVA is involved in cell membrane synthesis, glycoprotein synthesis, and intracellular signal transduction, cell cycle regulation and other critical biological functions[27, 28]. Therefore, HMG-CoA reductase, as the rate-limiting enzyme in intracellular MVA synthesis, is widely involved in critical cellular functions, such as cell signal transduction, glycoprotein synthesis, cell cycle progression, and cell membrane integrity[29-33]. In recent years, studies have found that in addition to their lipid-lowering effects, statins have multiple antitumor effects, including antiproliferative, proapoptotic, and anti-invasive activities as well as the ability to sensitize cells to radiochemotherapy[34-36]. Lovastatin early in the market and is a competitive inhibitor of hydroxymethylglutaryl coenzyme A (HMG-CoA) reductase. The drug is mainly used for the clinical treatment of hyperlipidemia and has been subjected to lengthy clinical study, which has generated a large body of data, and its therapeutic effects are well known[37]. In recent years, increasingly more studies have reported that lovastatin can inhibit cell proliferation, promote apoptosis and induce differentiation in tumor cells, but it has fewer toxic side effects for normal cells[38]. Marcelli et al. found that lovastatin treatment of prostate cancer LNCa cells for 48 h can induce apoptosis[39]. There are also reports that lovastatin can be combined with 5-fluorouracil or cisplatin as a chemotherapeutic drug to increase the chemosensitivity of colon cancer cells and to induce apoptosis[40].

Heatmap representation of differentially expressed proteins. We selected proteins with specific peptides >2 and area values at five-time points for protein identification. There were 211 proteins that met these conditions after lovastatin treatment. We used GENE protein software for the SOM analysis of the 211 proteins. We found that the levels of 189 proteins changed significantly after lovastatin treatment, and shown is the heatmap representation of the differentially expressed proteins after treatment of nasopharyngeal carcinoma cells with lovastatin. Proteins are listed by their respective gene names, and the fold changes in protein expression are shown. Overall, 92 proteins were downregulated (A), and 97 proteins were upregulated (B).

Lovastatin inhibits the growth of nasopharyngeal carcinoma cells by regulating cell metabolism and apoptosis pathways. IPA software was used to analyze the differentially expressed proteins identified by the mass spectrometry. The differentially regulated proteins were mainly enriched in proteins from the EIF2, mTOR, and PI3K/AKT pathways (A). Among them, proteins involved in the EIF2 signaling pathway are the most abundant (B). 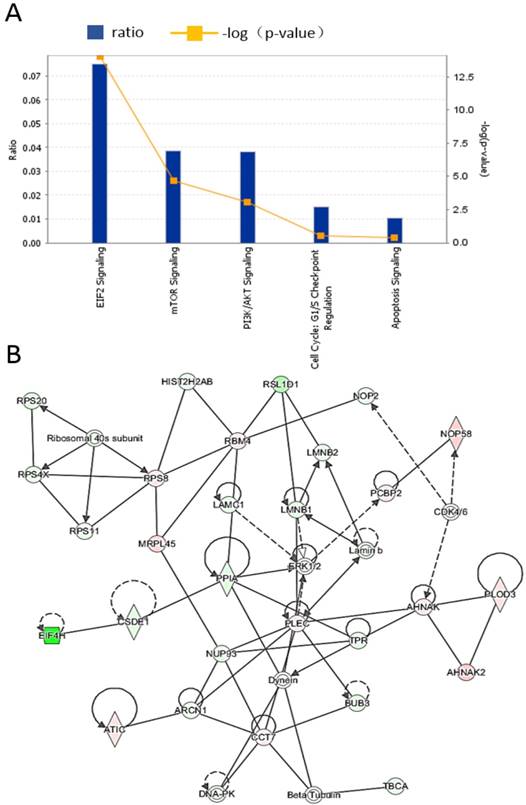 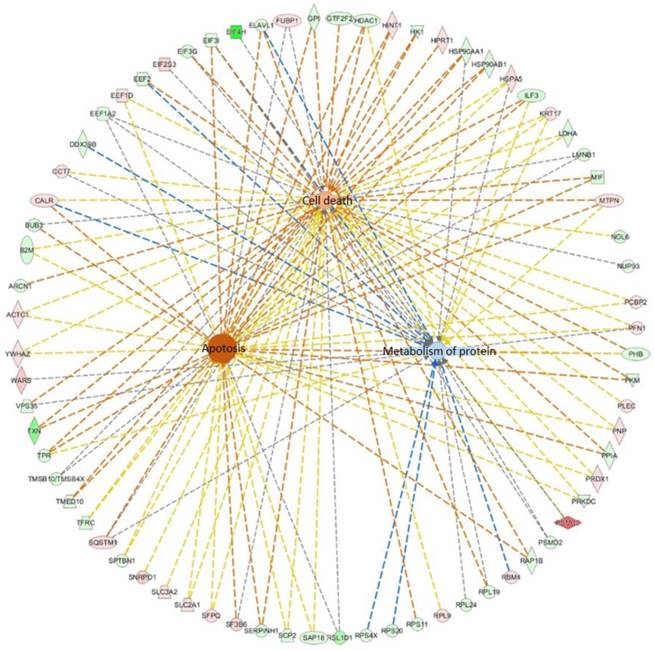