Background: The purpose of this study was to investigate the impact of subcarinal lymph node dissection on short-term and long-term outcomes after esophagectomy in patients with superficial esophageal squamous cell carcinoma (ESCC).

Methods: From January 2010 to December 2015, 490 patients with pT1 ESCC were enrolled in the study. Patients in subcarinal dissection or non-dissection group were matched randomly in a 2:1 ratio, eventually, 255 patients were selected for further statistical analysis.

Conclusion: Subcarinal lymph node dissection was not beneficial and could be omitted in superficial ESCC.

Esophageal cancer is one of the most common malignant tumors, accounting for approximately 455,800 new cases and 400,200 deaths in 2012 worldwide [1], most of which is reported from China. In China, esophageal squamous cell carcinoma (ESCC) is the predominant pathological type and tends to metastasize in a multidirectional fashion through the extensive submucosal lymphatics, even when the disease is a superficial lesion. Superficial esophageal cancer is categorized as intraepithelial (Tis), mucosal (T1a), or submucosal (T1b) cancer. It is reported that the incidence of lymph node metastasis in superficial ESCC ranged from 0 to 50%[2-5] and multiple regions of lymph nodes from cervix to abdomen may be involved. Thus, the importance of radical esophagectomy with 2- or 3-field lymph node dissection to achieve optimal local control has been emphasized [6]. However, extensive lymphadenectomy may lead to huge trauma, there is still fierce debate over the optimal extent of lymphadenectomy for superficial esophageal cancer.

Subcarinal lymph nodes is regarded as one of regional node stations for esophageal cancer and is suggested to be dissected by the 8th edition of the American Joint Committee on Cancer (AJCC) Staging Manual[7] and the 11th edition of the Japanese Classification of Esophageal Cancer[8, 9]. However, the metastatic rate of subcarinal nodes in ESCC is relatively low, no higher than 12.9%[10-12]. What's more, considering the procedure reportedly increasing pulmonary complications[13], subcarinal node dissection had better be performed for those at high risk for metastasis. In recent years, some investigators proposed that lymph node dissection for some regions in specific patients can be omitted, such as common hepatic nodes and splenic nodes[14-16], however, no literatures have reported the outcomes of subcarinal node dissection in superficial ESCC. It remains unclear whether subcarinal node dissection confers any survival benefit to patients with superficial ESCC.

From January 2010 to December 2015, 1940 patients with esophageal cancer were performed esophagectomy at our unit. Among these patients, we retrospectively reviewed 490 patients diagnosed with pT1 ESCC without neoadjuvant therapy (Figure. 1). Preoperative routine examinations including endoscopic biopsy, barium meal, computed tomography (CT) of the chest and abdomen, positron emission tomography-computed tomography (PET-CT) and endoscopic ultrasound (EUS), pulmonary function and blood tests were performed. This study was approved by the Ethics Committee of our hospital and complied with the standards of the Declaration of Helsinki and current ethical guidelines. Informed consent was obtained from each patient.

The surgical approaches included McKeown, Ivor-Lewis and Sweet procedures. Surgeons made the personalized operative plan and chose the most suitable procedure for individuals according to preoperative evaluation of primary tumor and potential metastatic lymph node location. Generally, McKeown procedure was used for upper or middle esophageal tumors, Ivor-Lewis procedure for middle or lower tumors and Sweet procedure for lower tumors. In this cohort of patients, en bloc lymph node dissection was performed, including the paraesophageal, subcarinal, paratracheal and tracheobronchial, pulmonary ligament, diaphragmatic, and paracardial, as well as those located along the lesser gastric curvature, the origin of the left gastric artery and the common hepatic artery. If tumors located in the upper third of esophagus, cervical lymph nodes were also dissected. Subcarinal node dissection was performed in patients with swollen nodes located under the carina, but not performed in patients without swollen nodes. According to the dissection status of subcarinal nodes, patients were divided into two groups: subcarinal node dissection group (dissection group) and subcarinal node non-dissection group (non-dissection group). Pathological staging was recorded according to the 8th edition of the TNM classification[17].

Follow-up visits were carried out every 3 months in the first two years and every 6 months in the following years. Regular follow-up included physical examination, tumor markers, CT of thorax and abdomen and neck ultrasonography. Follow-up was terminated in December 31st, 2016. The median follow-up time for the entire cohort was 46 months.

Flow chart of selection of patients 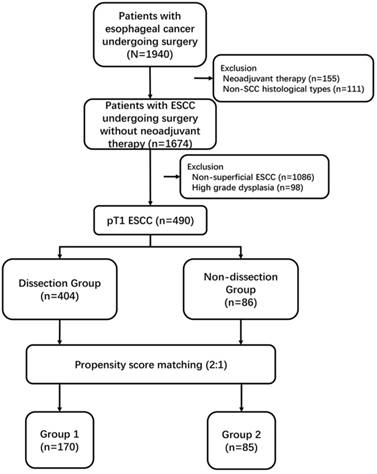 The medical records were used to collect demographic data, tumor factors and hospital course. The classification of complications was recorded according to International Consensus of Esophagectomy Complications Consensus Group (ECCG)[18]. To control for potential differences in the characteristics of patients between the two groups, nearest neighbor propensity-score matching based on logistic regression was applied using a 1:2 ratios according to 8 baseline variables: gender, age, ASA grade, tumor location, surgical approach, cTNM, pT and pN status[19, 20]. The caliper definition was set at 0.10. Eventually, 170 cases in dissection group paired with 85 cases in non-dissection group were enrolled in the cohort, classified as group 1 and group 2, respectively (Figure 1).

Statistical analyses were performed according to the intent-to-treat principle. The SPSS 22.0 software (SPSS Inc, Chicago, Ill) was used for data analysis. The clinical and pathological parameters were described as mean ± standard eviation for continuous variables and as frequency (%) for categorical variables. Categorical variables in any two groups were compared by χ2 test or Fisher's exact test and continuous variables by Mann-Whitney U test. The Kaplan-Meier method and log-rank tests were used to compare the survival. A parameter was included in a Cox regression model if the p value was <0.1 in the univariate analysis. All p values were derived from two-tailed tests. The significance level was set at 0.05. 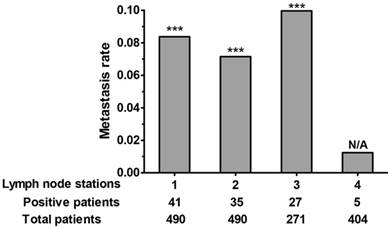 Esophageal cancer tended to have “upward and downward” metastases due to the unique, extensive lymphatics draining the esophagus. Some surgeons advocated wide range of mediastinal lymph node dissection for thoracic ESCC, such as 3-field lymphadenectomy[21] or extended lymphadenectomy[22]. However, extensive lymphadenectomy was reported to increase the incidence of complications, and was not likely to offer improved prognosis for all patients with thoracic ESCC[23, 24]. Therefore, the concept of individualized specific lymphadenectomy was proposed to improve postoperative quality of life and reduce the incidence of complications on the basis of ensuring oncological outcomes.

Another important issue was the short-term outcomes following subcarinal node dissection. It was reported subcarinal node dissection not only increased blood loss, operation time and postoperative pleural drainage volume[28], but also increased the incidence of postoperative complications significantly, especially pulmonary complications[13]. Our study also revealed the higher risk of pulmonary complications in subcarinal dissection group. Two reasons may account for such results. Firstly, the branches of the vagus nerve in the pulmonary plexus were often injured during subcarinal node dissection, resulting in decreased ability to expectorate sputum and thus induced pulmonary infection. Secondly, the heat conduction of electronic devices may damage the tracheobronchial wall as a result of increasing respiratory secretion and decreasing tracheobronchial blood flow. Given this, patients were more likely to suffer from the procedure rather than achieve benefits, although it was not difficult to perform such procedure technically. Nowadays, enhanced recovery after surgery (ERAS) has become the hotspot in multiple disciplines, and subcarinal node dissection in superficial ESCC could be left out for the implementation of ERAS.

Intraoperative, postoperative and pathological data according to preoperative treatment

Values are expressed as mean ± standard deviation or number of patients (n, %) unless indicated otherwise; *P<0.05

Univariate and multivariate analyses for overall survival and disease-free survival

The research also had limitations. It was a retrospective study from single medical center with a relative small sample size, which could lead to selection bias, though propensity score matching method has been performed. Therefore, new prospective randomized controlled trials in multiple centers are needed to validate these findings.

Subcarinal lymph node dissection might have little value for patients with superficial ESCC and could be omitted in this population.

This work was supported by the Science and Technology Commission of Shanghai Municipality (grant number: 16411965900); and Zhongshan Hospital (grant number: 2016ZSLC15).

This study has been approved by the Ethics Committee of Zhongshan Hospital of Fudan University. Informed consent was obtained from all individual participants included in the study.