Objective: Recently, accumulating evidence has indicated that the 3' untranslated regions (3'UTRs) of protein coding genes play critical roles in the progression of various cancers, including ovarian cancer. This study is aimed to identify the potential role of SNAI2-3'UTR in ovarain cancer progression.

Study Design: First, we tried to explore the clinical significance of SNAI2 in ovarian cancer using TCGA and GSE26712 dataset. Then, gain-of-function studies were performed to establish the role of SNAI2-3'UTR in invasion and migration of ovarian cancer cells. Finally, efforts were made to identify the downstream targets of SNAI2-3'UTR.

Results: Our data indicated that the expression of SNAI2 was significantly correlated with FIGO stage (P=0.015) and lymphatic invasion status (P=0.004), whereas not with age(P>0.05) and histological grade(P>0.05). Patients with higher SNAI2 expression had a shorter overall survival (OS) in both TCGA dataset (P=0.039, HR=1.54(1.02-2.33)) and GSE26712 dataset (P=0.0017, HR=1.77(1.24-2.54)). Functional studies revealed that SNAI2-3'UTR promoted the invasion of both OVCA433 and SKOV-3 cells without significantly affecting their migratory abilities. MARCKS, which was also involved in the invasion of ovarian cancer cells, was identified as a potential downstream target of SNAI2-3'UTR. SNAI2-3'UTR may function as a ceRNA to upregulate MARCKS expression in ovarian cancer.

Ovarian cancer is the most lethal gynecological cancer and the majority of the patients are not diagnosed until advanced stages. Over the past decades, little improvement in overall survival has been achieved despite advances in chemotherapeutic agents. The standard treatment for epithelial ovarian cancer is aggressive debulking surgery followed by a platinum and taxane combination chemotherapy, and debulking status is a crucial prognostic factor for patients with ovarian cancer(1). However, due to the aggressive metastatic nature of ovarian cancer, surgery rarely leads to complete tumor resection. Thus, a better understanding of the mechanisms involved in ovarian cancer invasion and metastasis is of great importance to overcome this malignancy.

SNAI2 is a key epithelial-to-mesenchymal trasition (EMT) associated transcription factor. Previous studies have indicated that repression of EMT is a complex process controlled by multi-layer regulations, including but not limited to EMT-inducing transcription factors(EMT-TFs), non-coding RNAs, alternative splicing, and translational and post-translational control (which affect protein stabilization and localization). Among them, the network built around EMT-TFs is most extensively studied. SNAI2 is one of these key EMT-TFs and previous studies have indicated that repression of SNAI2 by RNA interference, which could reduce both SNAI2 mRNA and SNAI2 protein, greatly reverses the EMT process and thereby decreases metastatic ability of various cancer cells(2-6). Since the competing endogenous RNA(ceRNA) hypothesis indicates that the 3'untranslated regions (3'UTR) of protein coding genes can function as natural miRNA sponges(7-14), functionally freeing other transcripts targeted by that panel of miRNAs, it is possible that the SNAI2-3'UTR could function independently of the protein in cancer progression. That is to say SNAI2-3'UTR may regulate the progression process of ovarian cancer by functioning as a ceRNA.

In this study, we try to establish the roles of SNAI2-3'UTR in ovarian cancer and to identify its downstream targets, which may add a layer of regulation to the progression process controlled by SNAI2.

We downloaded the level 3 Affymetrix HG-U133A gene expression data for SNAI2 and MARCKS from 208 patients with serous ovarian cancer in TCGA dataset to analyze the association of SNAI2 expression with the clinicopathological features, and to determine the correlation between SNAI2 expression and MARCKS expression.

For producing lentiviral particles, 293T cells were seeded in 3.5-cm dishes at a density of 4×105 per dish and transfected with pCDH-Vector/pCDH-SNAI2-3'UTR plasmids or PLKO-Scramble-shRNA/PLKO-MARCKS-shRNA, as well as packing plasmids psPAX2 (0.75µg) (Addgene#12260) and pMD2.G (0.25µg) (Addgene #12259) using Attractene Transfection Reagent (QIAGEN). Forty-eight hours post transfection, virus-containing medium (2ml) was harvested, filtered, mixed with 2ml of freshsly prepared medium, supplemented with 8µg/ml polybrene (Sigma) and added to 3×105 OVCA433 cells or SKOV-3 cells seeded in a 3.5-cm dish the day before. Puromycin (2µg/ml) was supplemented 48h after infection. The cells were selected for 2 days and then used for various assays.

RTCA CIM-Plate was used to explore the migration and invasion of ovarian cancer cells. Migration and invasion assays were performed according to protocols supplied by the manufacturers. For invasion assay, the inserts were coated with BD Matrigel (B.D. Biosciences). Briefly, 4×104 Scramble-shRNA- and MARCKS-shRNA-transfected OVCA433 cells or pCDH-vector- and pCDH-SNAI2-3'UTR-transfected OVCA433 cells or SKOV-3 cells were added into the RTCA CIM-Plate and monitored by xCELLigence (Roche) for 24 hours respectively.

All data were analyzed with SPSS statistic software (SPSS 16.0). Student's t test (two-tailed) was used to compare two groups. Chi-square test was used to evaluate the differences between groups for categorical variables. The Log-rank test was used to determine the relationship between SNAI2 expression and clinical outcomes. The Kaplan-Meier method was used to generate survival curves. Pearson correlation analysis was performed to determine the coexpression status between SNAI2 and MARCKS. P-value<0.05 was considered statistically significant.

3.1 The relationship between SNAI2 expression and the clinicopathological parameters in ovarian cancer patients

Initially, we sought to explore the relationship between SNAI2 expression and the clinicopathological features for 208 patients with serous ovarian cancer using data from the TCGA data portal. The median expression value is used as the cutoff point. The results revealed that increased expression of SNAI2 was significantly correlated with FIGO stage (P=0.015, χ2 test) and lymphatic invasion status (P=0.004, χ2 test), whereas not with age and histological grade (Table 1). Namely, the expression of SNAI2 was higher in patients classified as FIGO Stage III/IV than that classified as FIGO Stage I/II (Fig. 1A), and was higher in patients with lymphatic invasion than that without lymphatic invasion (Fig. 1B). Furthermore, Log Rank (Mantel-Cox) analysis revealed that increased expression of SNAI2 was associated with shorter overall survival (OS) (P=0.039, HR=1.54 (1.02-2.33); Fig. 1C). This result was confirmed in GSE26712 dataset (P=0.0017, HR=1.77 (1.24-2.54); Fig. 1D).

3.3 MARCKS was a potential downstream targets of SNAI2-3'UTR 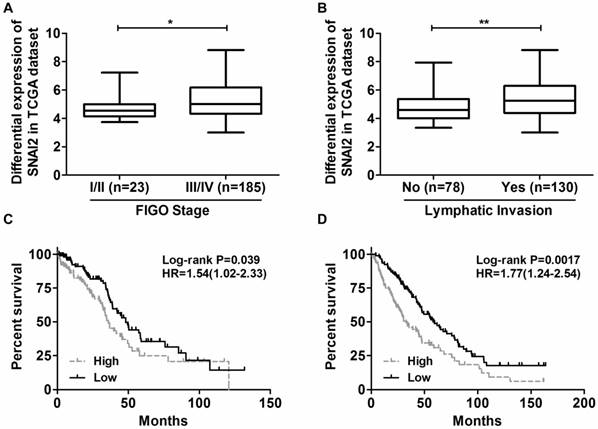 Overexpression of SNAI2-3'UTR in OVCA433 and SKOV-3 cells validated by Real-time PCR. 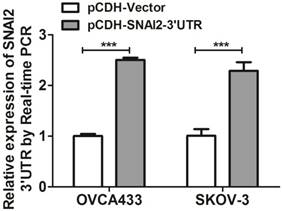 Bioinformatics analysis based on TargetScan 6.2 revealed that SNAI2 and MARCKS shared multiple miRNA binding sites (MREs), and these MREs were mainly located on the former 1000bp region of MARCKS-3'UTR. To ascertain whether the observed regulatory effect of SNAI2-3'UTR on the expression of MARCKS is dependent upon its interaction with MARCKS-3'UTR, we constructed a luciferase reporter construct fused to a fragment of MARCKS-3'UTR (1124bp, from +43 to +1166). Interestingly, overexpression of SNAI2-3'UTR led to a significant increase of the luciferase activity in a dose dependent manner (Fig.6).

3.4 Attenuated expression of MARCKS impaired the invasion and migration of OVCA433 cells 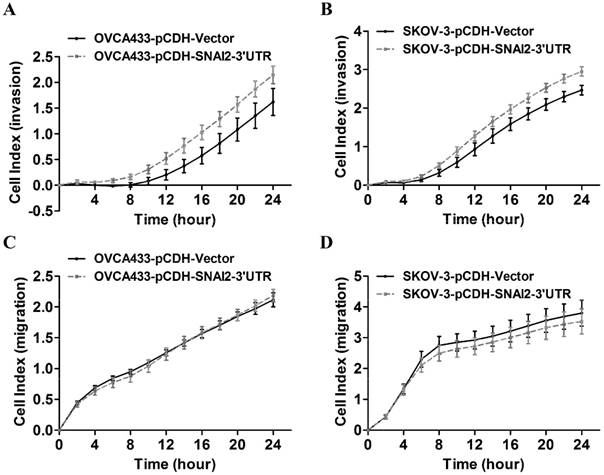 Screen and identification of the potential downstream targets of SNAI2-3'UTR. (A, B) The regulation of SNAI2 3'UTR on the mRNA level of invasion-associated genes in OVCA433 (A) and SKOV-3 (B) cells; (C, D) SNAI2 3'UTR overexpression significantly induced the protein level of MARCKS in OVCA433 (C) and SKOV-3 (D) cells; 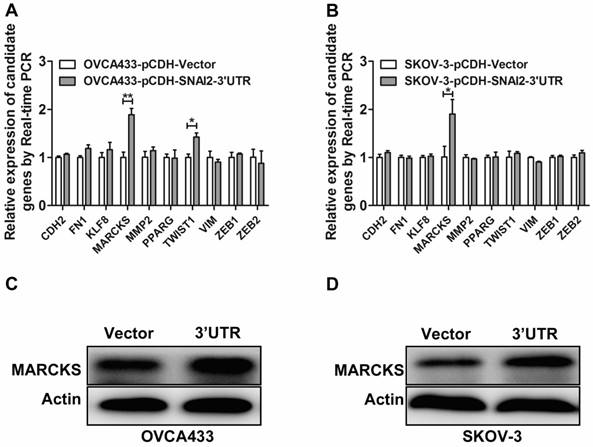 Coexpression analysis of SNAI2 and MARCKS in primary ovarian cancer tissues from the TCGA dataset and GEO dataset. (A, B) The expressionf of SNAI2 was significantly positively correlated with the expression of MARCKS in both TCGA (A) and GEO (B) datasets. (C, D) MARCKS was differentially expressed between “SNAI2-low” group and “SNAI2-high” group in both TCGA (C) and GEO (D) datasets. 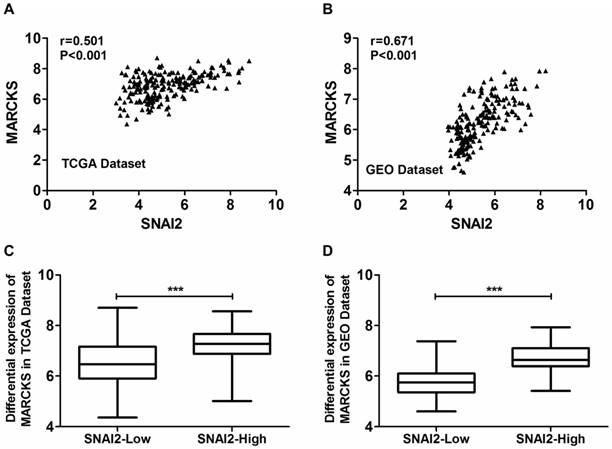 The relative luciferase activity in OVCA433 cells co-transfected with psi-MARCKS-3'UTR, and an increasing dose of pcDNA3.1-Vector or pcDNA3.1-SNAI2-3'UTR. 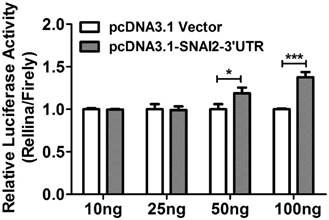 Traditionally, the functional characterization of protein-coding genes has mainly focused on the role of their coding sequences. However, the untranslated regions of protein-coding genes have received undue attention. In our previous review, we have made a summary that the reprogramming of 3'UTRs by various means is a common phenomenon in cancer and disturbances of 3'UTRs significantly increase the risk of cancer susceptibility by acting both in cis and in trans(15). In this study, we demonstrated that SNAI2-3'UTR could promote the invasion of ovarian cancer cells at least partly by upregulating MARCKS expression.

Previously, artificial miRNA decoys termed “miRNA sponges” were employed to create loss-of-function phenotypes for specific miRNAs in various disease models(16, 17). It is tempting to speculate that the nature may also create such natural miRNA sponges to sequence-specifically sequester miRNAs. Indeed, evidence supporting this hypothesis has emerged and a theory termed ceRNA hypotheis was born(7, 18). The ceRNA hypothesis indicates that specific RNAs, including but not limited to mRNAs, transcribed pseudogenes, circular RNAs, and other lncRNAs, can function as natural miRNA sponges, functionally freeing other transcripts targeted by that panel of miRNAs and thereby leading to phenotypic changes(7). In this study, we demonstrated that SNAI2-3'UTR could upregulate MARCKS expression by interacting with MARCKS-3'UTR. Correlation analysis further revealed that SNAI2 and MARCKS were coexpressed in clinical samples from GEO dataset. Subsequent loss-of-function studies demonstrated that MARCKS was involved in the invasion of ovarian cancer cells. These findings supported the notion that SNAI2-3'UTR may function as a ceRNA to regulate MARCKS expression. 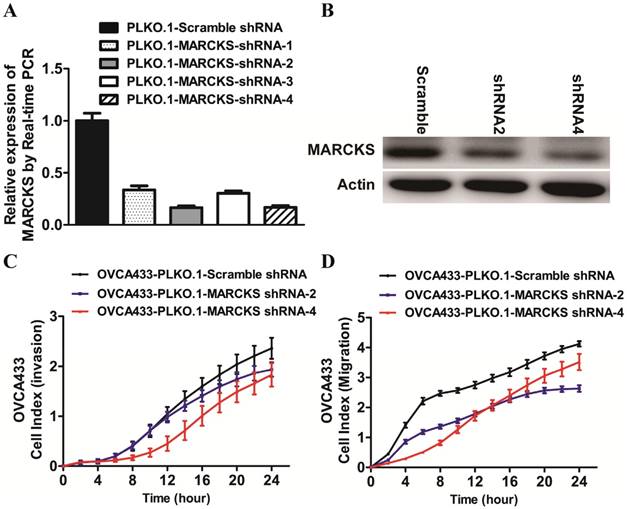 However, it should be noted that the noncoding function of SNAI2-3'UTR in promoting invasion may go beyond its ability to modulate the levels of MARCKS only. Some other invasion associated genes may be also subjected to the regulation by SNAI2-3'UTR. For example, TWIST1 was another potential target of SNAI2-3'UTR as indicated by our data. In addition to the 3'UTR, the binding sites for miRNAs may be also located in other regions of the mRNA transcript, including the coding regions and 5'UTR(19, 20). Thus, the entire transcript of SNAI2 mRNA could have decoy activity. The challenge ahead is to identify the whole network of SNAI2 associated ceRNAs. Furthermore, the 3'UTRs could function as decoys for not only miRNAs but also for other trans-acting factors(21). For instance, overexpression of HMGA1 pseudogene (HMGA1-p) 3'UTR led to the destabilization of HMGA1 mRNA transcript possibly by competing for negative trans factors(21). Thus, it remains to be seen whether SNAI2-3'UTR has such functions. Efforts toward this would help us fully understand the noncoding function of SNAI2.

In conclusion, our study demonstrated that SNAI2-3'UTR could function as a ceRNA to regulate MARCKS expression, which proposed a new mechanism by which SNAI2 induced EMT in ovarian cancer.

Collection and assembly of data: All authors.

Data analysis and interpretation: All authors.

Final approval of manuscript: All authors.