Objective: As a member of the Wnt family, WNT6 contributes to tumorigenesis and the development of various types of cancer. However, the expression status of WNT6 in colorectal liver metastasis (CRLM) and its prognostic value remain to be elucidated. In this study, we evaluated the association of WNT6 expression with survival outcomes in CRLM patients undergoing liver resection.

Methods: The medical records of 106 consecutive CRLM patients undergoing curative tumor resection between October 1996 and December 2011 were retrospectively selected. WNT6 expression was detected using immunohistochemistry (IHC) analyses on paraffin-embedded specimens. The IHC score was determined according to the percentage and intensity of positively stained cells. Recurrence-free survival (RFS) and overall survival (OS) were analyzed using the Kaplan-Meier method and the log-rank test, and independent prognostic factors were determined by Cox regression modeling.

Conclusions: High expression of WNT6 was associated with unfavorable oncologic prognosis in patients with CRLM undergoing liver resection. Detection of WNT6 expression may be valuable for guiding postoperative treatment.

To date, colorectal cancer (CRC) has become one of the most common human malignant diseases and a leading cause of cancer-related deaths in China and worldwide [1, 2]. The survival outcome of CRC patients is largely impaired by the development of distant metastatic disease. The liver, in addition to being the most common site of metastases, is also the first area of metastatic spread in 25% of patients at diagnosis [3]. In addition, approximately 25-35% of patients ultimately develop liver metastases during the course of their disease [4]. Despite recent advances in chemotherapy strategies for the treatment of patients with colorectal liver metastases (CRLM), liver resection offers the only chance of long-term survival for these patients [5-7]. Unfortunately, more than 60% of patients developed recurrent disease after initial liver resection during follow-up [8, 9]. Among those with postoperative recurrence, 27.8-45% of patients even developed early recurrent disease within 6 to 8 months after liver resection [10, 11]. Therefore, the management of CRLM is challenging, and understanding the tumor biological behavior of CRLM is important to help establish and optimize therapeutic strategies. Although multiple clinical risk factors are commonly adopted in the identification of different risk subgroups, a proportion of patients remain incorrectly assessed because of the inconsistent predictive power and lack of reproducibility due to selection bias [12, 13]. Identification of novel biomarkers to screen out various prognostic risk subgroups to guide individual treatment for CRLM is urgently needed.

Wnt/β-catenin alterations are prominent in human malignancies and participate in tumorigenesis and tumor progression by increasing tumorigenicity, sustaining proliferation, and enhancing metastatic potential [14, 15]. The Wnt gene family consists of structurally related genes that encode a group of 19 secreted and cysteine-rich signaling proteins [16]. Wnt family member 6 (WNT6), as a member of the Wnt signaling family, has been reported to be involved in promoting the proliferation and differentiation of embryonic palatal mesenchymal cells, macrophages, and stromal cells [17-19]. In addition to its vital functions in embryonic development, WNT6 also contributes to tumorigenesis [20]. Furthermore, previous studies have reported that WNT6 is overexpressed in gastric cancer and esophageal cancer, which indicates unfavorable survival after tumor resection [21, 22]. However, the prognostic value of WNT6 expression in patients with CRLM undergoing liver resection remains unclear. Overexpression of WNT6 is involved in colon cancer cell progression and promotes proliferation, cell cycle and migration [23]. Accordingly, we hypothesized that WNT6 is a direct measure of tumor biology and may be a powerful predictor of survival outcome in CRC patients.

To further validate our hypothesis, the present study aimed to explore the prognostic value of WNT6 and its relationship with clinicopathologic characteristics in patients with colorectal liver-only metastasis (CLOM) undergoing liver resection.

Paraffin-embedded tumor tissue samples of primary tumors were obtained from 106 consecutive CRLM patients who underwent tumor resection at the Sun Yat-sen University Cancer Center (Guangzhou, China) from October 1996 to December 2011. All included patients met the following inclusion criteria: (1) histologically confirmed colorectal adenocarcinoma; (2) American Society of Anesthesiologists (ASA) class I-II status; (3) no preoperative extrahepatic metastases; (4) radical resection for both colorectal primary tumor and liver metastasis; and (5) a postoperative follow-up period of at least 3 months. The patient demographics, tumor characteristics, adjuvant chemotherapy and follow-up data were retrospectively collected from the electronic medical record system. The tumor stage was classified according to the 2010 American Joint Committee on Cancer staging system. The treatment strategy and operability of liver metastases for each patient were determined according to the final agreement of the multidisciplinary team (MDT) as previously described [24]. The present study was undertaken in accordance with the ethical standards of the World Medical Association Declaration of Helsinki. Informed consent for the use of tissue samples was obtained from the patients before tumor resection. The study was approved by the Institutional Research Ethics Committee of Sun Yat-sen University Cancer Center (Approval number: GZR2017-004).

The paraffin-embedded tissues were sectioned continuously into 4-μm-thick sections. The tissue sections were dewaxed in xylene, rehydrated and rinsed in graded ethanol solutions. The antigens were retrieved by heating the tissue sections at 100 °C for 5 min in EDTA (1 mmol/L, pH 8.0) solution when necessary. The sections were then immersed in a 0.3% hydrogen peroxide solution for 10 min to block endogenous peroxidase activity, rinsed in phosphate buffered saline (PBS) for 5 min, and incubated with the WNT6 primary antibody (1:200 dilution, ab50030; Abcam, Cambridge, MA, USA) at 4 °C overnight. Subsequently, the slides were washed with 1× PBS and treated with a goat antibody against a mouse/rabbit secondary antibody (Envision; Dako, Glostrup, Denmark) at 37.5 °C for 30 min. Finally, the visualized staining was developed with 3,3'-diaminobenzidine tetrahydrochloride (DAB, Dako, Glostrup, Denmark), and all of the slides were counterstained with hematoxylin.

Patients were monitored through subsequent visits every 3 months for the first 2 years and then semiannually for 5 years after liver resection. Clinical examination, assessment of CEA and carbohydrate antigen 19-9 (CA19-9) levels, and chest radiography were conducted every 3 months. Chest/abdominal/pelvic CT and colonoscopy were performed annually. Overall survival (OS) was defined as the interval from the date of liver resection to the date of death from any cause or to the last follow-up. Recurrence-free survival (RFS) was defined as the interval from tumor resection to the date of disease recurrence, death or the last follow-up. Random censoring was applied to patients without recurrence or death at the last follow-up date. The final follow-up visit occurred in May 2018.

All analyses were performed using IBM SPSS statistics software, version 21.0 (IBM Corp., Armonk, NY, USA). Categorical variables are presented as percentages, and they were compared using the chi-square test or Fisher's exact test. Continuous variables are presented as the median (range). Mann-Whiney U test was used for two-group comparison, and Kruskal-Wallis H test was used for multiple-group comparison. Survival outcomes were summarized by the Kaplan-Meier method and log-rank survival analysis. Parameters for which P < 0.05 for OS in the univariate Cox models were further assessed in multivariate Cox models. Hazard ratios (HRs) and 95% confidence intervals (CIs) were subsequently calculated. All of the statistical tests were two-sided; P < 0.05 was considered significant. 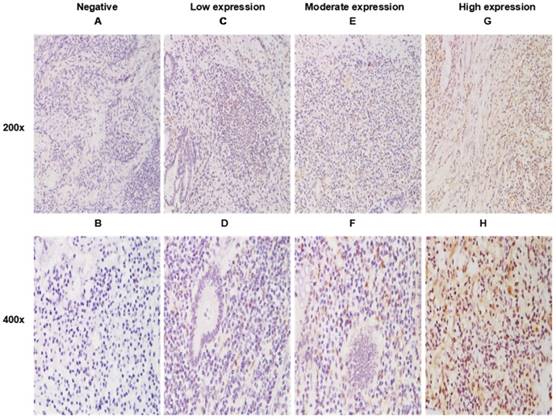 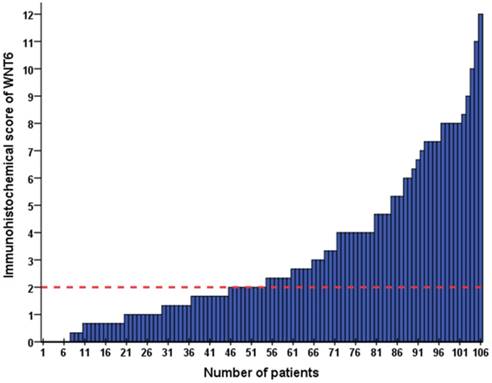 To further understand tumorigenesis and explore significant biomarkers to predict long-term survival in CRLM, the present study evaluated WNT6 expression in tumor tissue of CRLM patients for the first time. Our data show that WNT6 is commonly expressed in colon cancer tumor tissues. Furthermore, overexpression of WNT6 in tumor tissue was correlated with poor OS in CRLM patients, especially in those with low-risk CRLM. Our results also indicate that WNT6 expression was an independent prognostic factor for 5-year OS. These results implied that WNT6 might be used as a potential prognostic biomarker for CRLM.

Several molecular mechanisms could contribute to the reduced long-term survival observed with high WNT6 expression in CRLM patients. WNT6 promotes tumorigenesis and progression of colon cancer [23], and overexpression of WNT6 may increase the expression of caspase-3 and MMP2. It is well known that MMP2 is involved in the proteolytic degradation of the extracellular matrix, which subsequently promotes the epithelial to mesenchymal transition (EMT), a key process involved in cancer metastasis[28, 29]. Moreover, WNT6 was also confirmed to be an important component of EMT initiation [30]. These findings suggest that WNT6 plays an important role in maintaining metastatic aggressiveness in CRC cells. Chemotherapy resistance is another factor that compromises the prognosis of CRLM patients. Our data showed that patients receiving preoperative chemotherapy presented significantly lower WNT6 expression than those without preoperative chemotherapy (P = 0.033). We hypothesized that chemotherapy decreases the expression level of WNT6 in CRLM and that the effect of chemotherapy might be associated with WNT6 expression. If high expression of WNT6 after chemotherapy was detected, the effect of chemotherapy might be not approving. A previous study indicated that WNT6 was able to facilitate the development of resistance to chemotherapeutic drugs [21, 31]. The increased WNT6 expression rendered tumor cells resistant to apoptosis, thus favoring tumor cell survival and further progression [21]. In addition, enhancing the expression of WNT6 increases the cisplatin resistance of bladder cancer cells [31]. Accordingly, we considered WNT6 to be a potential target to overcome chemoresistance in cancer patients.

Although WNT6 expression was not significantly associated with CRS, we found that WNT6 expression was associated with OS in low-risk patients but not in high-risk patients. We considered this to be mainly attributed to the disparate characteristics between different-risk CRLM patients. CRLM patients with CRS 0-2 have a highly favorable outcome, while patients with a CRS of 3-5 have a much more guarded prognosis [27, 32]. As clinical risk factors accumulate, their effect on prognosis increases.

In addition, Ayez N et al. study has demonstrated that traditional CRS systems including Fong system are not a reliable prognostic tool when used in patients before treatment with preoperative chemotherapy except for the Nordlinger CRS system [33]. In fact, there were 29.2% patients were performed preoperative chemotherapy in the current study, which might affect the prognostic analysis value of Fong CRS system. Therefore, the prognostic predictive effect of WNT6 expression is more difficult to discern. This finding suggested that the long-term survival of low-risk patients might be more susceptible to WNT6 expression.

Some limitations of this study should be acknowledged. First, this retrospective study was conducted with an uncontrolled methodology and included a limited number of patients from a single center. Therefore, the findings need to be validated in multicenter studies or larger cohort studies. Second, liver metastatic tumors were not included in this study to detect WNT6 expression. This limitation may have led to an underestimation of the prognostic impact of WNT6 on the long-term survival of CRLM patients. Moreover, molecular features of tumors, such as microsatellite instability (MSI), CpG island methylator phenotype (CIMP) level, and BRAF and KRAS mutational status, were not evaluated in this study; an analysis of the association of WNT6 with these molecular markers would help us further understand the impact of WNT6 on tumorigenesis in CRLM. Future studies should examine these biomarkers. Despite these limitations, our findings suggest that WNT6 expression should be considered a routine postoperative measurement for CRLM patients undergoing liver resection.

In conclusion, this study demonstrated that WNT6 expression is a valuable predictor of OS in patients with CRLM undergoing hepatic resection. Herein, the detection of WNT6 expression may help surgeons evaluate the benefit of curative hepatectomy and formulate individualized strategies for postoperative treatment.

We deeply appreciate the help from all colleagues of the colorectal surgery department at Sun Yat-sen University Cancer Center, who have worked in obtaining the tissue specimens and provided it to the current study. The correspondence authors, on behalf of all coauthors, take full responsibility for the analyses in this study. The authenticity of this article has been validated by uploading the key raw data onto the Research Data Deposit public platform (www.researchdata.org.cn), with the approval number as RDDA2018000347.

Study was approved by the Institutional Research Ethics Committee of Sun Yat-sen University Cancer Center (Approval number: GZR2017-004). The informed consents for using blood samples, before the initial treatment, were obtained from the patients.

The datasets analysed during the current study were available from the corresponding author on reasonable request. Anyone who is interested in the information should contact zhanglin@sysucc.org.cn.