Cytology-based Papanicolaou test on and primary HPV screening have been widely used in the identification of cervical cancer and precancerous lesions, which is of great significance for the prevention and treatment of cervical cancer. Patients diagnosed as ASCUS/LSIL usually need follow-up because some of them may develop into CIN2+. The consequences of women positive for HPV vary from person to person; some of them may progress into cervical dysplasia, reversible forms of precancerous lesions, and eventually invasive cervical cancer. Therefore, it is necessary to establish an effective biomarker to triage different patients according to the preliminary screening results. p16 acts as a cell cycle regulatory protein that induces cell cycle arrest, and Ki-67 is a cell proliferation marker. Under physiological conditions, they could not co-express in the same cervical epithelial cells. The co-expression of these two molecules suggests a deregulation of the cell cycle mediated by HR-HPV infection and predicts the presence of high-grade cervical epithelial lesions. There is increasing evidence that p16/Ki-67 dual-staining cytology can be used as an alternative biomarker, showing overall high sensitivity and specificity for identifying high-grade CIN and cervical cancer. In this review, we discuss the significance of p16/Ki-67 dual-staining and summarize its application in the screening and triaging of cervical cancer and precancerous lesions.

Cervical cancer is the fourth most common malignant tumor among women worldwide [1], and the infection of human papillomavirus (HPV) is essential cause. Certain HPV types, in particular high-risk HPV (HR-HPV) 16 and 18, may lead to cervical dysplasia, reversible forms of precancerous lesions. Persistent infection of the cervix can cause irreversible changes leading to carcinoma in situ and eventually invasive cervical cancer. This results from the effects of HPV genes, particularly those encoding E6 and E7. Integration of HPV DNA into the host genome induces the expression of E6 and E7 [2]. E7 binds to and inactivates retinoblastoma protein (pRB), leading to the activation of the cell cycle [3]. E6 binds to and inactivates the p53 protein and deregulates the cell cycle in synergy with the inactivation of the cell cycle regulator pRB by E7. Expression of E7 and E6 can efficiently immortalize human primary keratinocytes and is required to induce and to maintain the transformed phenotype of cervical cancer cells [4].

Patients with mild cervical lesions diagnosed as low-grade squamous intraepithelial lesion (LSIL) and atypical squamous cells of undetermined significance (ASCUS) may progress to grade 2 or more severe cervical intraepithelial neoplasia (CIN2+) [13]. At this time, HPV DNA testing is introduced to triage minor abnormal cytology. Because of the low specificity of HPV DNA testing, many women will undergo colposcopy, especially among young women under 30 years of age with high HPV prevalence [14]. For example, the HR-HPV prevalence varies from 80% to 85% in women with LSIL. They are either directly referred to colposcopy or are followed up by cytology [14]. According to the FDA guidelines for primary HPV screening, women with positive HPV16 or HPV18 were immediately examined by colposcopy, while women with positive HPV but negative HPV16 or HPV18 were examined by cytology. If cytology is negative, they will be followed up 12 months later [15]. Many women with positive HPV need repeated cytological follow-up because of the relatively low sensitivity of cytology. Therefore, more effective markers are required to triage HPV-positive women with normal cytology or negative HPV16/18 and to identify women with potential high-grade CIN from cytological ASCUS/LSIL candidates. Accumulating evidence suggests that p16/Ki-67 dual-staining cytology is becoming an alternative biomarker, showing overall high sensitivity and specificity for identifying high-grade CIN [16-20]. This article will discuss the significance of p16/Ki-67 dual-staining and summarize its application in the screen and triage of cervical cancer and precancerous lesions.

p16INK4A (p16) is a tumor suppressor protein, also known as cyclin-dependent kinase inhibitor 2A (CDKN2A) [21, 22]. It is encoded by the CDKN2A gene located on short arm of chromosome 9 (9p21.3) and named for its molecular weight and its role in inhibiting cyclin-dependent kinases 4 (CDK4) [23]. p16 can bind to CDK4 and CDK6, which plays an important role in the regulation of cell cycle. CDK4/6 normally forms a protein complex with cyclin D to phosphorylate pRB. Upon phosphorylation, pRB disassociates from the transcription factor E2F1, leading to E2F1 translocation into the nucleus, where E2F1 induces the transcription of target genes that promote cell transition from G1 phase to S phase. Therefore, p16 acts as a CDK inhibitor by preventing its interaction with cyclin D, consequently prohibiting cell cycle progression [24, 25]. p16 downregulation can lead to cancer via the dysregulation of cell cycle progression. The p16 gene is frequently mutated in many cancers and downregulation of p16 expression is associated with increased risk of cancers [26, 27].

In cells with HPV infections, E7 protein competes for binding cell cycle regulatory proteins pRb, resulting in the release of E2F1 from pRb and the activation of the cell cycle [4]. The disturbance of pRb-E2F1 pathway by E7 induces the overexpression and accumulation of p16 in the cells through a negative feedback loop [3, 28]. Strong and diffuse cytoplasmic and nuclear expression of p16 in cervical squamous cell carcinomas is predominantly associated with HR-HPV infection. Therefore, p16 is considered a surrogate marker for persistent HR-HPV infection and p16 overexpression has been observed in the majority of cervical precancers and cancers [29, 30].

Ki-67 is a cell proliferation marker, first defined by its city of origin (Kiel) and the number of original clone [31]. Ki-67 is a nuclear non-histone protein, which is encoded by MKI-67 gene and expressed in all phases of the cell cycle, except during the G0 phase [32]. Ki-67 exerts multiple functions in regulating cell cycle progression [33]. With the progression of cell cycle, it plays different roles, which is related to its distribution in the cells. Ki-67 is required for the normal cellular distribution and nucleolar association of heterochromatin during interphase [33]. During mitosis, Ki-67 is involved in the formation of the perichromosomal layer, which functions as a protective sheath around the chromosomes and provides a platform during nucleolar assembly, where Ki-67 serves as a biological surfactant to prevent the aggregation of mitotic chromosomes after nuclear envelope disassembly [34].

As a cell proliferation marker, Ki-67 predicts the malignant potential of tumors. Immunohistochemical analysis of Ki-67 is usually performed on paraffin-embedded section and serves as an attractive index for prognosis and prediction in many tumors [31]. The detection of Ki-67 has been widely used in the auxiliary diagnosis of cervical precancers and cancers [30, 35].

p16 is a tumor suppressor and Ki-67 is a cellular marker for proliferation. The over-expression of p16 and expression of Ki-67 under physiological situations are mutually exclusive and do not occur in the same cervical epithelial cell. Therefore, the p16/Ki-67 co-expression implies deregulation of the cell cycle induced by HR-HPV and detection of p16/Ki-67 co-expression can serve as a marker to predict the cell transformation by HR-HPV and the presence of high-grade CIN lesions [18, 19, 36]. Co-expression of p16/Ki-67 can be detected with antibodies against p16 and Ki-67. The brown cytoplasm/nuclear signal was displayed by p16 staining alone, and the red nuclear signal was displayed by Ki-67 staining alone. Positive p16/Ki-67 dual-staining cells had brown cytoplasm signals for p16 expression, and dark red to red brown nuclear signals reflected the co-localization of p16 and Ki-67 in the same cell (Fig 1). Slides with one or more cervical epithelial cells that were simultaneously stained for p16 and Ki-67 were classified as positive regardless of the morphological appearance of the cells [37].

p16/Ki-67 dual-staining positive cells with morphological features of HSIL. A, Liquid-based cytology (SurePath). B, Slide A was dual-stained with p16/Ki-67. Cell with p16 staining alone (blue arrow) is characterized by a brown cytoplasmic/nuclear signal and cell with Ki-67 staining alone (red arrow) is presented in red nuclear signal. The positive p16/Ki-67 dual-staining cells (dark arrow) are characterized by a brown cytoplasmic signal for p16 overexpression and a dark red nuclear signal for p16/Ki-67 co-expression in the same cell. (45-year-old woman, CIN3, HPV16+, p16/Ki-67+). 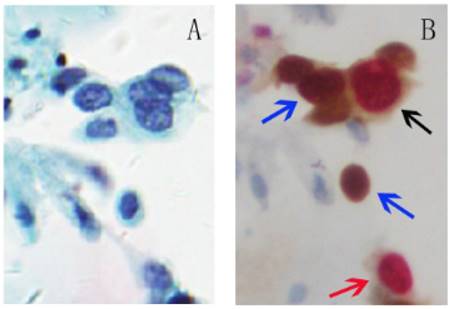 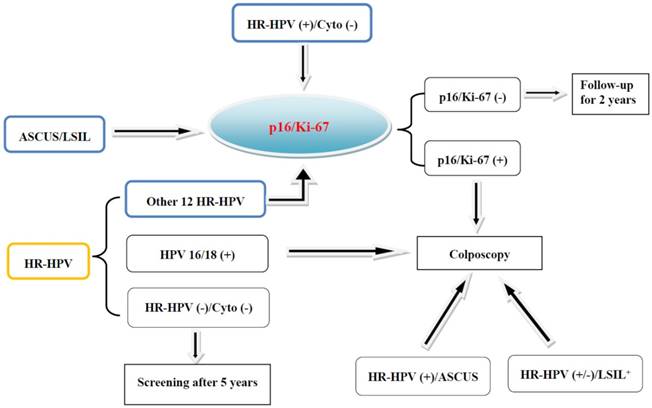 Once the HPV-positive women with normal cytology were followed up, the 5-year cumulative incidence risks (CIR) for CIN2+ and CIN3+ were 12.2% and 6.9%, respectively. Even if HPV16/18 genotyping was negative, the 5-year CIR for CIN3+ was still 3.6%. If these women were negative for p16/Ki-67, the 5-year CIR for CIN3+ decreased to 3.3% [47]. Therefore, p16/Ki-67 dual-staining is suitable for triaging HPV-positive women with normal cytology to colposcopy to identify patients with a high probability of potential CIN2+ [18, 47].

The absolute risk of CIN3 in women positive for HPV DNA alone was 15.6% [49]. Among women with positive p16/Ki-67 and HPV DNA, the risk increased to 27%, while among women with negative p16/Ki-67 and HPV DNA, the risk decreased to 1.2% [49]. Obviously, the combination of HPV DNA testing and p16/Ki-67 dual-staining can more effectively identify potential HSIL individuals with only slight cytological abnormalities.

The combination of p16/Ki-67 dual-staining and HR-HPV detection can also be used to monitor the recurrence of CIN2+ (rCIN2+). Long-term follow-up studies showed that some patients treated for CIN2 and CIN3 may relapse and need to be closely monitored [50, 51]. Cytological and HR-HPV co-detection has recently been recommended as a follow-up strategy for these patients to avoid loss of potential HR-HPV negative CIN2+ lesions [50, 52]. However, the specificity of cytological detection or combined detection of cytology and HPV is limited. The sensitivity and specificity of cytology, HR-HPV detection, and p16/Ki-67 dual-staining for rCIN2+ in 364 women treated for CIN2/3 were analyzed. Their sensitivities were 82.1%, 84.6%, and 69.2%, respectively, but the specificity of p16/Ki-67 was 90.4%, which was significantly higher than 70.8% in cytology and 76.2% in HR-HPV testing. The sensitivity of combined detection of p16/Ki-67 and HR-HPV was similar to cytology/HR-HPV co-detection (87.2% vs. 89.7%), but the specificity was significantly improved (74.2% vs. 58.1%), which resulted in higher positive predictive value and fewer referrals for colposcopy [53].