SRPX2 and RAB31 are effective prognostic biomarkers in pancreatic cancer

Methods: The expression of SRPX2 and RAB31 in pancreatic tumor tissues and cells was evaluated through database mining of the Oncomine, Gene Expression Omnibus (GEO) and The Cancer Genome Atlas (TCGA) databases, and validated the results through immunohistochemistry (IHC) and Western blot in our clinical database. Protein-protein interactions were explored by immunofluorescence and Co-immunoprecipitation (Co-IP). Two hundred tissue microarray specimens from patients (79 training and 121 validation), who underwent curative pancreatectomy for pancreatic ductal adenocarcinoma (PDAC) were used. Additionally, the association between the SRPX2 and RAB31 and prognosis of PDAC patients after surgery was analyzed.

Conclusions: The combination of SRPX2 and RAB31 can be important markers for the prognosis of pancreatic cancer.

Pancreatic cancer is one of the leading causes of cancer mortality in developed countries, resulting in a substantial global burden, and pancreatic ductal adenocarcinoma (PDAC) is the most common type of pancreatic cancer [1]. The incidence of PDAC is projected to increase dramatically, becoming the second leading cause of cancer-related deaths before 2030 [2]. An investigation of 678,842 patients with invasive cancer in China between 2003 and 2013 indicated that 5-year relative survival has not improved in the past decade, being only 7.3% [3]. Therefore, prognostic factors are indispensable for providing personalized treatment to PDAC patients with an individualized balance between treatment efficacy and side effects. Some progress has been made in identifying prognostic molecules for PDAC. For example, SPARC overexpression is correlated with poor prognosis [4], elevated CA19-9 serum levels are associated with poor prognosis [5], and miRNAs have emerged as potential prognostic biomarkers for PDAC. However, due to the poor sensitivity and specificity of currently available markers, the identification of new biomarkers with increased specificity is urgently needed.

Sushi repeat-containing protein, X-linked 2 (SRPX2) is a secreted extracellular matrix protein that has recently emerged as a multifunctional molecule involved in seizure disorders, angiogenesis, and cellular adhesion [6]. Recently, SRPX2 expression was demonstrated to be upregulated in colorectal cancer [7], and gastric cancer [8]. In these malignancies, SRPX2 is commonly considered an oncogene that promotes the proliferation, migration, and invasion of cancer cells. However, the clinical significance and biological role of SRPX2 in pancreatic cancer remains largely unknown.

RAB31, a member of the Ras superfamily, has been reported to play a role in tumor development and progression, and dysregulation of Rab small GTPases leads to various diseases, including cancers [9]. Therefore, many studies have also reported that RAB31 is widely involved in the molecular pathways underlying cancer progression [10]. For instance, Grismayer et al reported that high expression of RAB31 is frequently observed in breast cancer tissues and is associated with uncontrolled cell proliferation [11]. Additionally, RAB31 protein has also been reported to be correlated with the overall survival of patients with liver cancer [12]. However, no study has reported whether there is a significant association between RAB31 expression and the progression and prognosis of pancreatic cancer.

79 clinical specimens as training set and 121 validation set were obtained from patients who underwent R0 resection for PDAC at Shanghai Cancer Center (Shanghai, China) from January 2012 to December 2013 and from January 2014 to December 2015. All specimens were independently assessed by two experienced pathologists according to the 8th edition of the American Joint Committee on Cancer (AJCC) TNM staging system. All patients in this study were resectable PDAC without distant metastasis, and none of the patients received preoperative anticancer treatment.

Overall survival (OS) was calculated as the interval between surgery and death or the date of last follow up. Disease-free survival (DFS) is defined as the interval between surgery and recurrence or the last date of follow up. All patients were followed through June 2018. Research Ethics Committees at the associated pancreatic centers approved the use of human tissues, and informed consent was obtained from all patients according to the committees' regulations.

Human pancreatic cancer cell lines (MIA, PaCa2) was obtained from the American Type Culture Collection (Manassas, VA, USA) and were cultured in DMEM with 10% fetal bovine serum (Gibco) supplemented with 100 μ g/ml streptomycin and 100 U/ml penicillin, and were maintained in humidified atmosphere of 5% CO2 at 37 °C.

Oncomine is a cancer microarray database and web-based data mining platform by which people accelerate new and significant discoveries using genome-wide expression analyses. Expression and co-expression of distinct SRPX2 and RAB31 at the mRNA level in cancers was detected through analysis of the ONCOMINE database (www.Oncomine.org). In this study, Student's t-test was used to generate a p-value for comparison between cancer specimens and normal control datasets. Fold change was defined as 2 and P-value was set as 0.05.

Public gene expression profiles of GSE15471 were downloaded from the Gene Expression Omnibus (GEO, http://www.ncbi.nlm.nih.gov/geo), a public functional genomic data repository. GSE15471 contains 39 pairs of tissues (PDAC tissues and abnormal tissues). Additionally, the RNA-sequencing (RNA-seq) dataset of SRPX2 and RAB31 were downloaded from TCGA (http://portal.gdc.cancer.gov/) for co-expression analysis. Fold change was defined as 2 and p-value was set as 0.05.

CCLE is a popular online encyclopedia containing a compilation of gene expression, chromosomal copy number, and massively parallel sequencing data, which facilitates identification of genetic, lineage, and predictors of drug sensitivity. Expression of SRPX2 and RAB31 at the mRNA level in pancreatic cancer cells was analyzed using the CCLE database (https://portals.broadinstitute.org/ccle/home).

IHC and western blot were performed as previously described [13].

Cell lysates were immunoprecipitated with rabbit anti-SRPX2, anti-RAB31 antibody, and IgG to detect the interactions of endogenous proteins. The precipitates were separated by SDS-PAGE and analyzed by immunoblotting.

All statistical analyses were performed using SPSS v22.0 software (IBM SPSS, Chicago, IL). Differences between two groups were assessed using Student t-test. The association between SRPX2 and RAB31 expression in pancreatic cancer tissues was analyzed using Spearman's correlation. OS and DFS were analyzed by Kaplan-Meier survival curves with 95% confidence intervals (CIs), and the differences between subgroups were compared by log-rank test. Univariate and multivariate Cox regression analyses were used to identify independent prognostic factors. P< 0.05 was the criterion for variable deletion to perform backward stepwise selection. All tests were 2-sided, and P < 0.05 was considered statistically significant.

Overexpression of SRPX2 and RAB31 are identified in pancreatic cancer

To explore the potential roles of SRPXs (SRPX1 and SRPX2) in pancreatic cancer, we analyzed the expression of these genes by data mining and validated by our data. First, we investigated the mRNA levels of SRPXs in human cancers using the Oncomine database. The results revealed that SRPX2 mRNA expression was significantly higher in pancreatic tumors than in normal tissues across a wide variety of datasets in different cancer types, whereas no significant difference was found in SRPX1 mRNA expression (Figure 1A). CCLE analysis was performed to evaluate the expression of these genes in human cancer cell lines. The results were consistent with those of the Oncomine analysis, demonstrating that SRPX2 and RAB31 are highly expressed in pancreatic cancer cell lines (Supplementary Figure 1). Oncomine analysis demonstrated that the SRPX2 and RAB31 transcripts were increased by 5.761-fold and 7.032-fold, respectively, in PDAC samples compared with normal tissues from the Oncomine database (Figure 1B). Additionally, from GSE15471 data (39 PDAC tissues vs. 39 normal tissues), GEO analysis revealed that both SRPX2 and RAB31 were significantly upregulated in PDAC tissues compared with normal tissues (Figure 1C). Then, this result was validated by Western blot in another 10 pairs of specimens (Figure 1D). These results demonstrate that SRPX2 and RAB31 are significantly upregulated in pancreatic cancer.

The positive correlation between SRPX2 and RAB31 expression in pancreatic cancer 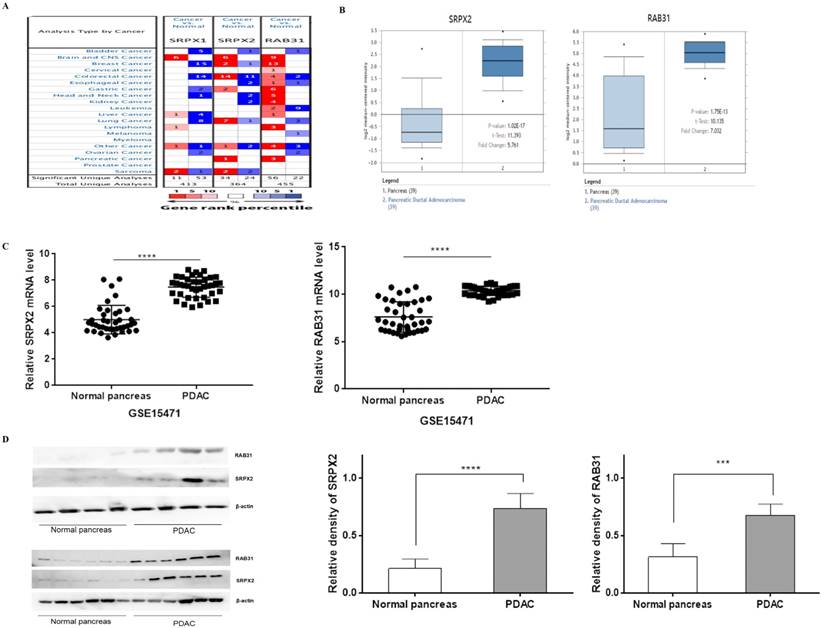 SRPX2 and RAB31 predict a poor prognosis for PDAC patients 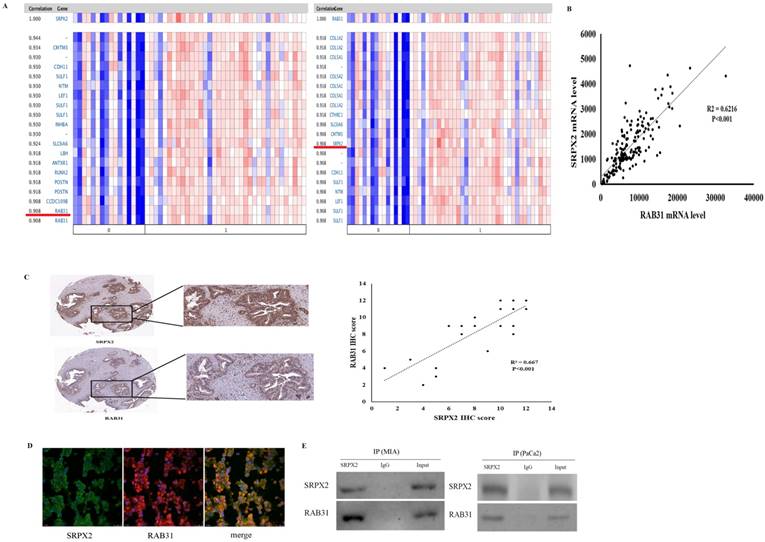 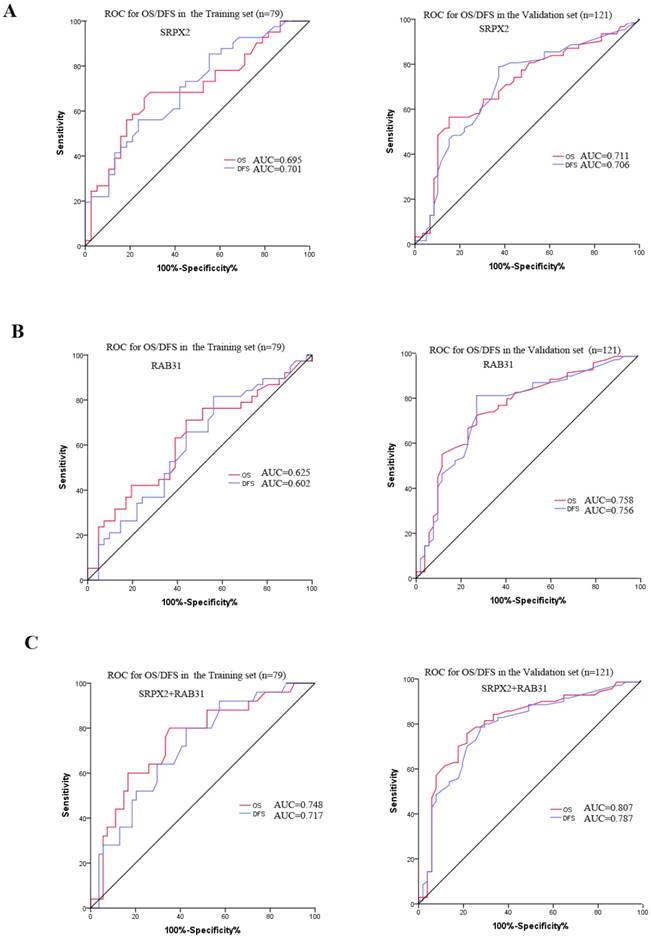 As pancreatic cancer is unfortunately typically detected during the late stages, fewer than 20% of patients are eligible for curative resections [14]. Identifying sensitive and specific markers for improving diagnosis and accurately evaluating prognosis remain urgent issues that need to be solved. In this study, we explored proteins associated with the diagnosis and prognosis of pancreatic cancer. First, the results from the Oncomine analysis and GEO databases revealed that there was a significant difference in SRPX2, RAB31 expression between tumor tissues and normal tissues in pancreatic cancer. Second, we found that SRPX2 directly interact with RAB31 in PDAC. Furthermore, cox regression analysis indicated that the combination of SRPX2 and RAB31 can be considered an independent predictive factor for the clinical outcomes of PDAC patients.

SRPX2 has been identified as a novel secreted chondroitin sulfate proteoglycan (GSPG) and found to play roles in a series of biological processes in tumor cells, including cellular motility and cellular attachment [6]. In several previous studies, researchers have reported that the expression of SRPX2 is upregulated in a variety of malignant tumor tissues [15]. Therefore, we analyzed the Oncomine and GEO databases to further evaluate the expression of SRPX2 in pancreatic cancer. The results showed that SRPX2 expression was increased by 5.761-fold in pancreatic cancer tissues compared with normal tissues. Additionally, CCLE analysis and immunofluorescence assays revealed that the expression of SRPX2 was increased in pancreatic tumor cells. Hence, as has been reported in other cancer studies, the expression of SRPX2 is significantly upregulated in pancreatic tumor tissues, implying that SRPX2 may be essential for the tumorigenesis and progression of pancreatic cancer. Additionally, the potential signaling pathways underlying SRPX2's involvement in the proliferation, migration, adhesion, and invasion of tumor cells have been persistently explored. One of the most widely recognized is the ability of SRPX2 overexpression to promote cell migration and invasion through FAK signaling in gastric cancer and hepatocellular carcinoma [16, 17]. Additionally, Zemmour et al demonstrated that SRPX2 directly interacts with urokinase plasminogen activator receptor (uPAR) [18]. uPAR is well known for its role in various tumor processes, so the SRPX2/uPAR interaction might provide one possible molecular mechanism for the function of SRPX2 in cancer.

Next, co-expression analysis was performed and indicated that there is a significantly positive correlation between the expression of SRPX2 and RAB31 in pancreatic tumor tissues. In the differential expression analysis, it was demonstrated that RAB31 is highly expressed not only in pancreatic tumor tissues but also in pancreatic cancer cells. Undoubtedly, RAB31 has long been considered a vital tumor promoter in other types of cancers [10]. Furthermore, several recent studies have demonstrated possible potential molecular pathways for the roles in cancer, one of which is that RAB31 induces cancer cell proliferation and migration through the ERK1/2 and PI3k/AKT pathways [19]. Additionally, increasing evidence indicates that the expression of RAB31 is correlated with uPAR-del4/5, and uPAR may be regulated by the Rab protein-driven pathway [20]. The combination of the involved molecular pathways of SRPX2 and RAB31 in cancer suggests that these two proteins share a common signaling pathway, which may be responsible for the positive correlation between their expression in pancreatic cancer.

The funding agencies had no role in the study design, data collection, analysis, decision to publish, or preparation of the manuscript.