Background: The prognostic nutritional index (PNI) is a useful parameter that indicates the immunonutritional status of patients with malignant tumors. In this retrospective study, we aimed to investigate the value of PNI to predict the outcome of gastrointestinal stromal tumors (GISTs).

Material and methods: This study enrolled 431 GIST patients who underwent curative resection from January 2000 to December 2012. A receiver operating characteristic (ROC) curve analysis was used to identify the cutoff value of PNI, neutrophil to lymphocyte ratio (NLR) and platelet to lymphocyte ratio (PLR). Survival curves were produced using the Kaplan-Meier method and were compared using a log-rank test. The Cox proportional hazards model was used to identify independent prognostic factors.

Conclusions: PNI is a simple and useful marker that can predict the prognosis of GIST.

Gastrointestinal stromal tumors (GISTs) are the most common mesenchymal neoplasm in the gastrointestinal tract. Surgical resection is the primary treatment for resectable GISTs. However, the prognosis of GISTs is still poor, and more than half of GIST patients suffer from recurrence within 5 years of curative surgery [1, 2].

Some tumor-specific parameters have been used to stratify the recurrence risk for GISTs, including primary tumor site, size, mitotic index, and tumor rupture [3-5]. Other parameters such as age and gender are reported to be associated with prognosis of GISTs and are currently under investigation for inclusion in a classification system to improve predictive accuracy [6]. Recently, the relationship between nutritional status and cancer-related inflammation has been shown to play an important role in long-term outcomes for some malignant tumors, due to the alternation of tumor cell biology in the tumor microenvironment [7-9]. In addition, some cancer-related inflammation blood parameters, including the neutrophil-to-lymphocyte ratio (NLR) and the platelet-to-lymphocyte ratio (PLR), have been shown to be significantly associated with prognosis in GIST patients [10-12]. Malnutrition is highly prevalent in malignant tumor patients. Some nutritional parameters, including albumin, body mass index (BMI), and skeletal muscle volume have been investigated to assess the nutritional risk for gastrointestinal cancer and were found to be significant prognostic factors [13-15].

The prognostic nutritional index (PNI), which was originally proposed to evaluate the perioperative immunonutritional status and surgical risk for gastrointestinal surgery [16], has been reported to be significantly associated with prognosis and postoperative complications for various gastrointestinal malignant tumors [17-21]. However, few studies have investigated the association between immunonutritional status and prognosis in GIST patients. Therefore, we aimed to investigate the value of PNI in predicting outcomes in GIST patients after surgical resection.

In total, 431 primary, localized GIST patients were enrolled from January 2000 to December 2012 at the First Affiliated Hospital, Zhejiang University School of Medicine. The pathological diagnosis of GIST was made based on a combination of histopathological evaluation and immunohistochemistry for CD117 or Discovered On GIST 1 (DOG1). The GIST risk classification was performed based on the modified National Institute of Health (NIH) risk classification system [3]. According to the classification system, high risk GISTs were defined as one or more of: (1) tumor rupture; (2) tumor size>10cm; (3) mitotic index (/50 HPFs)>10; (4) tumor size>5.0 and mitotic index (/50 HPFs)>5; (5) tumor size≤5.0cm, mitotic index (/50 HPFs)>5 and non-gastric GISTs; (6) tumor size range 5.1-10cm, mitotic index (/50 HPFs)≤5 and non-gastric GISTs. The inclusion criteria included: (1) age 18-80 years old; (2) Eastern Cooperative Oncology Group (ECOG) performance status score 0-2; (3) surgical resection with negative margins (R0 resection); (4) survival more than 1 month after surgery; and (5) no neoadjuvant or adjuvant tyrosine kinase inhibitor (TKI) therapy. The exclusion criteria included: (1) history of other primary malignancy; (2) incomplete clinical record or data, particularly preoperative hematological tests; and (3) presence of hematological disorders or infection at the time of a blood test; This study was approved by the Institutional Review Board of the First Affiliated Hospital, Zhejiang University School of Medicine.

The patients had follow-up appointments every 3-6 months for 2 years after surgery, every 6-12 months for 3-5 years, and then annually after 5 years. The last follow-up was performed in December, 2017. The follow-up appointments included routine peripheral blood tests, abdominal ultrasonography, and computed tomography (CT), as well as endoscopy and abdominal magnetic resonance imaging (MRI) when necessary.

Categorical data were analyzed using the chi-square test. Continuous variables were expressed as means and standard deviations, and were analyzed using the Mann-Whitney U test. The PNI cutoff value was determined according to the receiver operating characteristic (ROC) curve analysis, which was performed based on the recurrence status at 5-year follow-up. The Youden index, calculated as sensitivity - (1 - specificity), was estimated to determine the optimal cutoff value for PNI [22]. The recurrence-free survival (RFS) was set as the primary end point, which was defined as the time from surgery to the tumor recurrence. Patients who died without tumor recurrence or who were alive without evidence of recurrence on the date of last follow up were censored. Survival curves were calculated using the Kaplan-Meier method and compared using the log-rank test. The Cox proportional hazard model was used for multivariate analysis to determine independent prognosis factors for RFS. A p<0.05 was considered to be statistically significant, and confidence intervals (CI) were calculated at the 95 % level. All statistical analyses were performed with SPSS ver. 19 (SPSS, Chicago, IL, USA).

Relationship between PNI and clinicopathological characteristics of GISTs patients

Receiver operating characteristic (ROC) analysis of PNI (prognostic nutritional index), NLR (neutrophil-to-lymphocyte ratio) and PLR (platelet-to-lymphocyte ratio). The area under the curve for PNI, NLR and PLR were 0.662, 0.662 and 0.618, respectively. 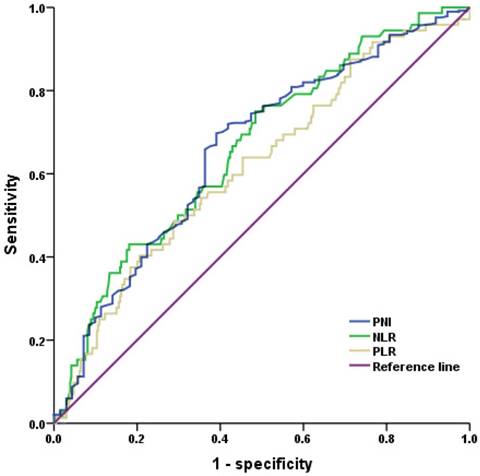 Recurrence-free survival of the GISTs patients (n = 431). The patients in PNI-high group had significant longer RFS than those in PNI-low group (p<0.001). 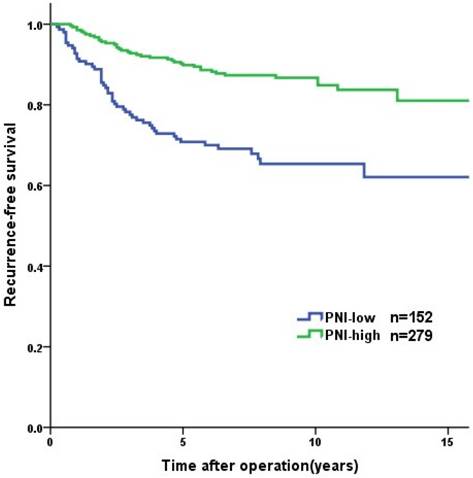 Correlation between PNI and clinicopathological characteristics

In this study, we found that PNI was an independent predictive factor of RFS in GIST patients receiving R0 resection. To the best of our knowledge, this is the first study to investigate the value of PNI in predicting GIST outcomes. Although NLR and the PLR have been shown to be significantly associated with prognosis in GIST patients [10-12], this study indicated PNI may be superior to NLR and PLR in predicting GIST outcomes.

Recurrence-free survival of the high risk GISTs patients (n = 141). The patients in PNI-high group had significant longer RFS than those in PNI-low group (p=0.004). 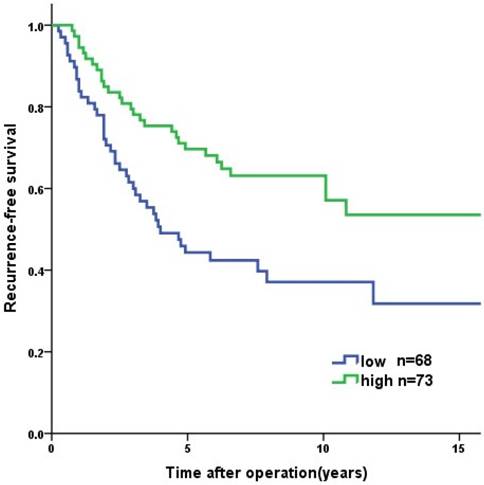 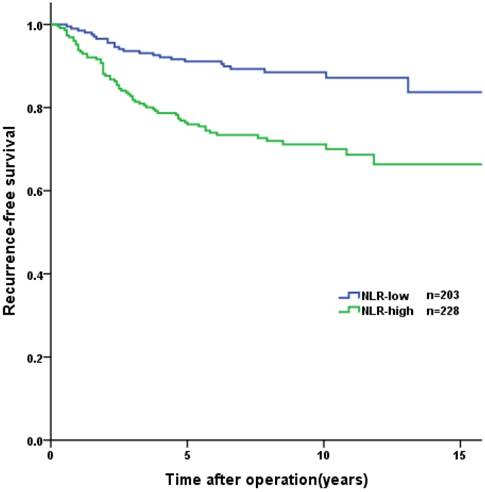 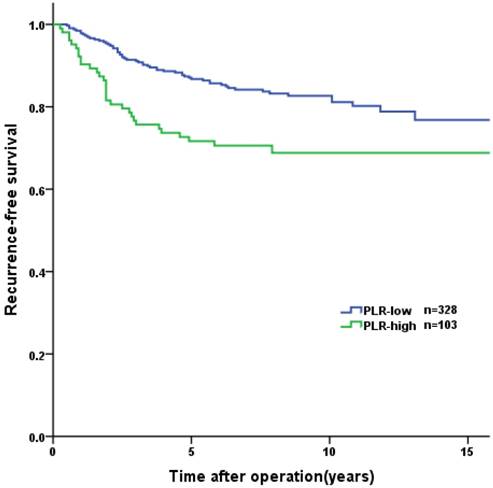 PNI is calculated from albumin levels and lymphocyte counts in the peripheral blood and is a parameter of immunonutritional status. PNI can be easily determined from routine blood tests, and was reported to be associated with the prognosis of various cancers, especially digestive tract cancers [17-19]. Therefore, PNI could be considered a useful and convenient biomarker to assess the prognostic outcomes of GIST patients before surgery. In previous studies for gastric cancer, the ROC analysis was performed to identify the cutoff value of PNI [18, 26]. The AUCs ranged from 0.648 to 0.732, the sensitivity ranged from 59.6% to 82.3% and the specificity ranged from 57.9% to 65.3% [18, 26]. In our study, the AUC for PNI was 0.662, with a sensitivity of 61.1 % and a specificity of 69.9 %. The sensitivity and specificity, in accord with data of previous studies, however, were not relatively high. Given the convenience to access, PNI may still have clinical meaning.

Malnutrition is highly prevalent among malignant tumor patients. Nutritional risk is a predictor of postoperative mortality and complications for gastrointestinal cancer patients [9, 27]. Albumin is widely applied to assess nutritional status. Hypoalbuminemia was demonstrated to be a prognostic factor for various digestive cancers [15]. For unresectable or metastatic GISTs, patients treated with imatinib therapy, and normal albumin levels and neutrophil counts in the peripheral blood, were independently associated with better survival [28]. The preoperative neutrophil count in the peripheral blood was also shown to be significantly associated with prognosis of localized GISTs without adjuvant imatinib therapy [10-12]. Although there is no association between the lymphocyte count and prognosis of GISTs, intratumoral CD3+ tumor-infiltrating lymphocytes and natural killer cells were highly enriched in GIST patients, and were shown to predict prognosis [29]. In addition, imatinib was indicated to activate CD8+ T cells and induce regulatory T cells apoptosis within the tumor by reducing tumor-cell expression of the immunosuppressive enzyme indoleamine 2,3-dioxygenase (Ido) [30]. PNI involves a combination of albumin levels with lymphocyte counts in the peripheral blood. In this study, we found that GIST patients in the PNI-high group had a significantly better RFS than those in the PNI-low group.

PNI can be decreased by several mechanisms. In gastric cancer, decline of PNI can be explained by gastric outlet obstruction, dietary restriction, malabsorption, chronic blood loss, and tumor consumption due to progression [18, 31]. GISTs can result in various digestive symptoms, and 25% of GIST patients have gastrointestinal bleeding, 16% have dyspepsia, 12.1% have nausea or vomiting, and 8.9% have constipation or diarrhea [32]. These factors may result in nutritional status impairment. The preoperative hemoglobin in peripheral blood was significantly lower in PNI-low group, the gastrointestinal bleeding maybe more common in PNI-low group. In this study, tumor size was significantly larger and the mitotic index was significantly higher in the PNI-low group than in the PNI-high group, which implies that the burden of advanced GISTs may also lead to a decline in PNI.

There are several limitations to this study. First, it is a single-institution retrospective study. In addition, GIST patients treated with adjuvant TKI therapy were excluded. Therefore, some patients with intermediate or high-risk tumors were excluded, which may be a selection bias.

In conclusion, PNI is a simple and useful marker for predicting the long-term outcomes of GIST patients.